Samsung is nothing if not prolific in bringing out new monitors and televisions, and it’s fair to say it’s also one of the market leaders in hybrids of the two. Today we’re looking at yet another one of these, the 23in SyncMaster P2370HD HDTV Monitor. Sporting a Full HD panel, the P2370HD walks the line between two previous Samsung models we’ve looked at, offering most of the features of the SyncMaster T240HD with the fancier styling and a dash of the energy-savings of the EcoFit SyncMaster P2370. This makes for a pretty enticing proposition on paper, so let’s see how it fares in reality. 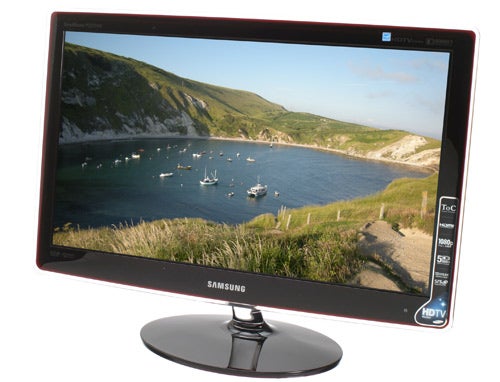 Despite the ergonomic sacrifices (no tilt, swivel or height-adjustment, unfortunately all too common on TV monitors), it must be said that visually, Samsung’s designs are spot-on – as long as you like the colour red, that is. This is yet another in Samsung’s extensive Touch of Colour (ToC) Rose Red range, with subtle crimson highlights towards the outer edges of its piano-black bezel and base. There’s also a transparent surround that adds depth and accentuates the tint, with the whole set on a classy transparent leg that’s easy to attach.


Connectivity isn’t quite up to the standard offered by the T240HD, with only one HDMI port instead of two. Aside from this, though, the P2370HD has every option you could want and then some, starting off with DVI, VGA, component, composite and SCART inputs, together with an antenna input, digital optical and analogue audio (3.5mm and dual phono), a headphone jack and even optical digital audio out to pass full surround sound from HDMI and optical through to a separate sound system.

All this connectivity is facing outwards rather than down, so hooking up cables is child’s play. Though there’s no HDMI cable in the box (common for displays under £300) DVI, VGA and 3.5mm audio ones are provided. On the P2370HD’s left side a plastic flap hides the CI slot for Freeview subscriptions. The only real annoyance is that the headphone socket no longer resides here as it did on the T240HD, meaning you’ll have to reach around the back if you intend to use a pair of headphones, but we guess it’s one of the sacrifices for the slimmer display.

As usual with the ToC range, the monitor’s controls are touch-sensitive, activating as red LED icons when you press the control area and fading out a few seconds after your last press. They match both the bezel’s tint and the red-backlit power ‘button’ nicely and Samsung has included the option to turn them on permanently, as well as giving you full control over their brightness level. 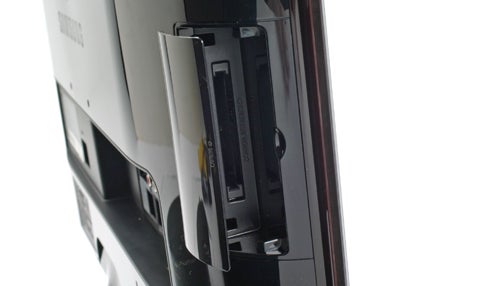 Not that you’ll likely be using the monitor’s controls too often; with all the experience Samsung has in making remotes for televisions, it’s no surprise that the responsive unit provided here is fairly impressive. Its ergonomic, tapered shape fits the hand comfortably and it takes two AAA batteries so you can use rechargeable ones. The large, colour-coded buttons have a lovely soft feel while offering positive feedback and though not backlit their logical arrangement and distinctive shapes make them easy to use in the dark.

Whichever method of control you use, the P2370HD’s large, colourful menus are a joy to navigate through. Clear icons are accompanied by short descriptions of each function and layout is logical. The Picture menu offers all the adjustments you could wish for, including backlight level, brightness, contrast and sharpness, colour and even tint. Little touches like ‘colour’ actually being spelled with a ‘u’ not only denote attention to detail on Samsung’s part, but also proper European firmware. A separate Setup menu controls extra functions such as the Game Mode and Child lock, while a dedicated Tools button on the remote provides convenient access to aspect ratio and image plus audio presets.


Onto the most important bit: what’s the panel’s image quality like? Initial first impressions were so-so. Greyscales suffered from a noticeable reddish tinge and though gradients were relatively smooth there was evidence of dithering, where processing attempts to make up shades the panel can’t natively display. Basically the P2370HD has all the hallmarks of TN-panel based displays. 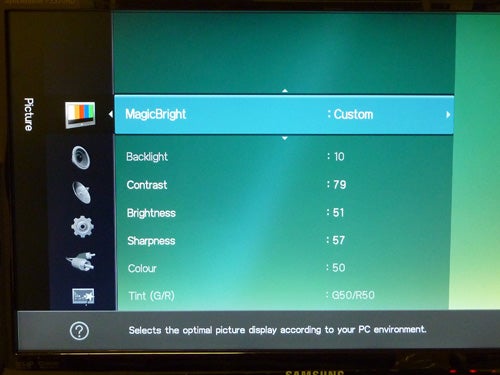 More disappointing was some noticeable backlight bleed from the top and bottom edges, which will be noticeable if watching a film in a darkened room. However, on the positives side the P2370HD (red tinge aside) handles subtle greys tones better than many contemporaries, producing plenty of fine detail in HD pictures. And, though vertical viewing angles are as poor as ever, horizontal ones are excellent, so – as long as you tilt the display correctly – viewing from the side is pleasant. Another plus is that even the smallest fonts are pin-sharp, an area hybrid monitors like this are typically stronger than a normal TV might be.

If you can ignore the backlight issues, watching films on the P2370HD is relatively pleasant, though we would recommend leaving the dynamic contrast setting (which boosts the native 1,000:1 contrast radio to an implausible 50,000:1) off. This monitor’s 1,920 x 1,080 resolution is also ideal for watching Blu-rays or connecting HD consoles, while also providing ample desktop real-estate for productivity tasks. 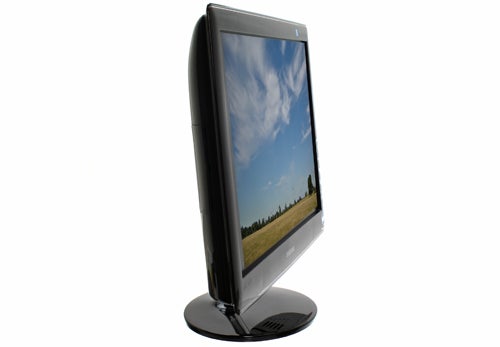 TV performance from the digital tuner, meanwhile, is pretty much what you would expect. Without any advanced processing to enhance it, the original signal quality (or lack thereof) is largely maintained. As a television then, this display can only be described as adequate, though it must be noted that the EPG and channel information presentation is up there with the best.


We were expecting the usual rather poor performance from the integrated 3W SRS TruSurround HD speakers, especially considering those found on the SyncMaster T240HD were none too impressive. However, we’re pleased to report that not only were our poor expectations unfounded, but we’d go so far as to say that the P2370HD has the best inbuilt speakers on any sub-24in display we’ve reviewed. Yes, that’s a sweeping statement, but they deserve it; offering audio with plenty of clarity, depth and passable bass without significant distortion even at their relatively high maximum volume, they’re a good match for the screen. This set also has Dolby Digital Plus support. 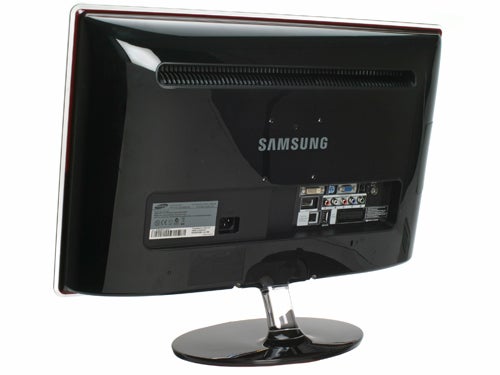 Another advantage for the P2370HD is its reduced power consumption. Where the T240HD burns though 75W when operational, the P2370HD consumes a more reasonable 51W. It’s probably not enough to seal the deal in favour of this new model, but it does no harm either.


Overall, how does this TV monitor hold up in the value stakes? Funnily enough Samsung’s strongest competition here is Samsung, as at £280 the P2370HD is exactly the same price as the older T240HD. It’s really up to you whether you want to go for the extra inch and second HDMI port of the latter, or the superior aesthetics and reduced energy consumption of the former. Since the P2370HD is a new product prices should go down after a while, but even as-is it’s good value for such a versatile display. 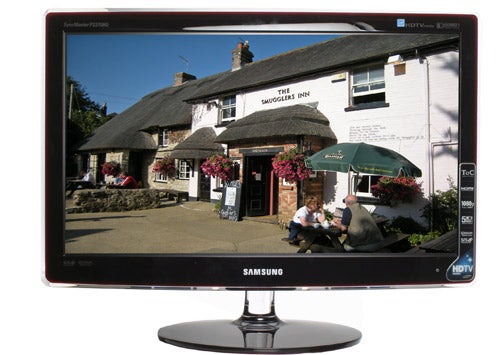 
If you’re after a compact, affordable monitor and TV for your bedroom or study the P2370HD is definitely worth considering: it’s beautifully designed, well featured and competitively priced. It’s only let down by adequate, but not outstanding, image quality and the fact that Samsung’s own T240HD costs around the same and offers an extra HDMI port.