PC monitor and TV hybrids are nothing new; in fact we’ve looked at quite a few this year, including the (article:LG-Flatron-M228WD-22in-Monitor-TV-Tuner LG Flatron M228WD), its replacement the (article:LG-Flatron-M2294D-22in-LCD-TV-Monitor M2294D) and the (article:Hyundai-22in-BlueH-HM22D-DVB-LCD-TV-Monitor Hyundai BlueH HM22D). All these models were 22 inch examples, so the 24 inch effort from Samsung we’re looking at today already has one key advantage: a Full HD friendly 1,920 x 1,200 resolution. This makes it ideal for watching high definition video content and games, provides ample desktop real-estate for working and at the flip of a switch – or press of a button in this instance – it’s a TV, too. 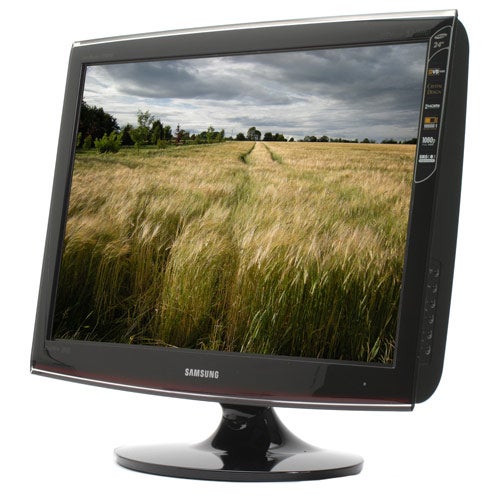 Dubbed the T240HD and also available as a cheaper non-TV version, the T240, this is yet another Samsung monitor to sport the company’s Touch of Colour livery. We’ve seen it a number of times already, first in the (article:Samsung-LE40A656-40in-LCD-TV Series 6 LE40A656 LCD TV), next in the (article:Samsung-SyncMaster-T200-20in-LCD-Monitor SyncMaster T200 20in Monitor) and more recently in the (article:Samsung-Q210-12-1in-Centrino-2-Notebook 12.1in Q210 Centrino 2) notebook. It works very well on Samsung’s TVs, but we were less convinced by the T200 and the Q210.


On the T240HD, however, we’re back to loving it. Though ostensibly no different in appearance to the T200, the clear plastic, red accenting and black framing simply works much better on a larger screen where it’s relative chunkiness is far less distracting. Combined with a large and curvaceous base, the delightfully subtle power light and touch-sensitive button inset into the frame, the T240HD is a very good looking, though more consumerist, take on a PC Monitor.

Perhaps unsurprisingly this does mean the absence of any meaningful adjustability – there’s just a modicum of swivel and tilt on hand and no VESA mounting. This would normally generate some moaning on our behalf but given the focus of the T240HD it’s not such a big deal, especially given 24in monitors suffer less due to their size. Moreover, though not so flexible in this respect, what the T240HD lacks in adjustability it more than makes up for in connectivity.


First of all you get two HDMI ports, one on the back and another hidden inside a flap on the left side. At the back this is joined by all the staples, such as D-SUB (VGA) and DVI ports, but also by Component video and phono audio jacks. There’s also a 3.5mm audio input for PC audio and, unusually, an optical audio output, too. This is particularly handy for extracting the surround sound audio from HDMI feeds, something you can’t do on most monitors with HDMI. 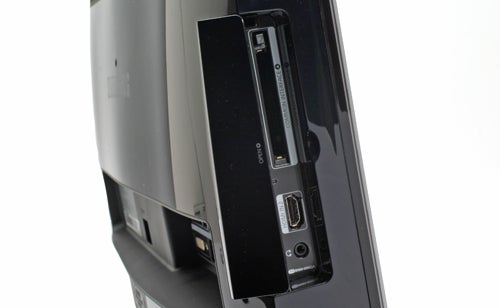 Other connections are mainly TV centric. There’s a SCART and an aerial socket on the back and on the left a CI slot for Freeview subscription services, in addition to the previously mentioned HDMI port and a headphone jack. Overall, the T240HD has enough connections for you to connect a PC or even two, an Xbox 360, a PS3 and a few other things besides. Perfect, then, for a bedroom brimming with electronics, maybe a student living in halls or other rented digs, or a kitchen.

So we like the design and we like the features, but it should go without saying that you have to pay a price: a £400 one to be precise. Judging value in this instance is complicated by the fact that this is also a TV, so comparing the T240HD against the plethora of cheap 24 inch monitors available, like the (article:BenQ-G2400W-24in-LCD-Monitor BenQ G2400W), (article:HP-w2408h-Vivid-Color-24in-Monitor HP w2408h) or (article:Iiyama-ProLite-B2403WS-24in-LCD Iiyama ProLite B2403WS), is somewhat moot while the price puts it up against the likes of the (article:Dell-UltraSharp-2408WFP-Widescreen-24in-LCD-Monitor Dell UltraSharp 2408WFP), (article:BenQ-FP241W-24in-Widescreen-Monitor BenQ FP241W) and (article:Hyundai-W241D-PVA-24in-Widescreen-Monitor Hyundai W241D) and their superior S-PVA panels – the T240HD uses a cheaper TN+ Film variety.


A more appropriate comparison, however, would be 26in TVs – a breed that’s slowly becoming extinct it seems. Here the value of the T240HD is a lot clearer. Samsung’s own (article:Samsung-LE-26R87BD-26in-LCD-TV LE-26R87BD 26in LCD TV) will now set you back around £420, as will other manufacturers offerings, while the T240HD offers similar connectivity and of course a superior resolution that can deal with 1080p sources. Looked at in this light the T240HD, though effectively playing in a field of one, offers decent value for money – especially for anyone whose needs it fits well.

As for panel specification, there aren’t too many surprises to be found. As already mentioned the T240HD uses a TN+ Film panel with a native resolution of 1,920 x 1,200 and though TN+ Film panels were once to be avoided, these days they’re much improved. A brightness rating of 300 nits (or cd/m2) is nothing out of the ordinary and neither is the 1,000:1 native contrast ratio, while we’ll take the headline grabbing 10,000:1 dynamic contrast rating with the usual mountain of salt.


Samsung quotes a grey-to-grey response time of 5ms and unlike many this doesn’t appear to be an overdriven figure, which would normally be around the 2ms mark. Again, Samsung quotes colour support of 16.7million but this is clearly achieved from dithering to make up extra shades – as is the case with most TN+ Film monitors. Meanwhile viewing angles are quoted as 160 degrees horizontal and vertical, which is about par for a TN+ Film monitor whose viewing angles are one of the key weaknesses compared to more expensive panel technologies. 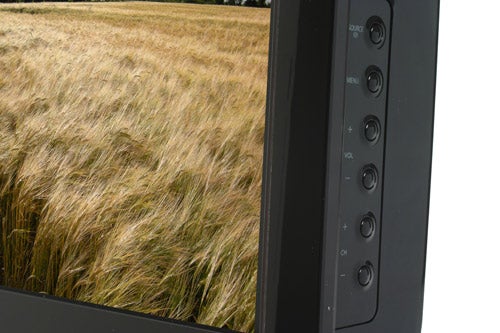 As this is a TV Monitor it also has speakers, two 3W efforts in this case with added support for SRS TruSurround XT. That the speakers on the T240HD are better than the usual monitor fare is without doubt, but this isn’t really saying much and though adequate for regular TV viewing, games and films reveal the a lack of power and range that no amount of dubious processing can hide. As such, a set of speakers or headphones for gaming and other activities come highly recommended.

Upon firing up the T240HD, it immediately impresses as having a pleasantly neutral image. A lot of manufacturers, including Samsung – who manufactures a high majority of panels anyway – have gone down the “high colour gamut” route with their monitors. This has lead to a spate of displays with rather stilted, often florescent looking images that look un-natural and require tuning to iron out. With a TV monitor, this approach simply wouldn’t work, so we’re happy to report no problems in this respect with the T240HD.


It’s noticeable that the T240HD takes a more TV inspired approach to settings. Like the rather smart remote, the settings menus are lifted directly from Samsung’s TVs and this is no bad thing since they’re well arranged and easy to navigate, especially with the remote. MagicBright picture modes include Entertain, Internet, Text, Dynamic Contrast and Custom modes. Text and Internet are darker for comfortable reading, Entertain is brighter and Dynamic Contrast enables the dynamic backlight – you can probably work out what Custom means! 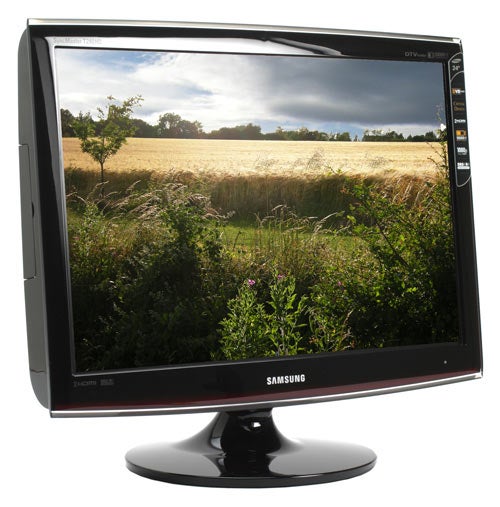 Unlike some monitors, though, the colour options are labelled as Normal, Warm and Cool – rather than using the colour temperatures. This is more end-user friendly and provided you know what you’re looking at, it’s pretty easy to tell what is what. Along with the usual brightness and contrast controls you can also adjust sharpness – handy when viewing higher detail high-definition video.


Before we get onto to such delights, however, there’s the business of standard definition content to deal with and specifically Freeview image quality. Despite its “digital credentials”, anyone who knows anything knows that the Freeview feed isn’t of great quality and good TVs use a lot of processing to get regular TV looking passable. 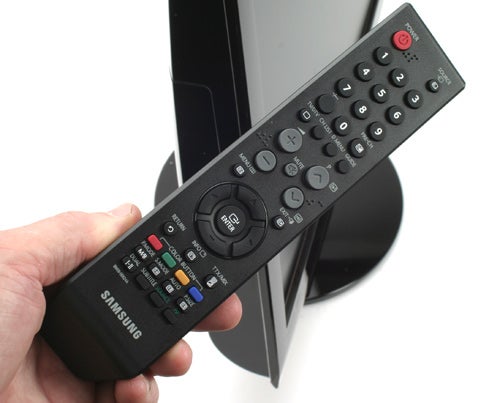 It’s this kind of processing that the T240HD lacks and though it puts forward a reasonable performance, we’ve seen Freeview look better than this. It doesn’t do a great job of eliminating pixel crawl and the various digital artefacts are obvious for even an un-trained eye to see. This doesn’t make it unwatchable by any means, but it won’t match most dedicated TVs.


Another department that weakens its TV credentials are the viewing angles. Again, they’re just about acceptable, but there is a noticeable loss of contrast and some colour shift that’s at its worst when viewed from above. Happily, things like the EPG and basic navigation are very good, better than the majority of TV/Monitor hybrids we’ve seen and though it may sound like the T240HD isn’t that a good TV, as a secondary TV for the bedroom or kitchen you could do a lot worse – but also slightly better.

If the T240HD is a competent if slightly middling TV, it continues in a similar vain as a monitor. In our monitor tests, it struggles to produce dark level details, with dark grey shades fading to black and lighter ones to white and some red/brown contamination in darker grey shades.


Colour production is largely solid, though there’s a hint of banding in the middle of the 256 colour scale. On a positive note there was a pleasing lack of backlight bleed, with only a sliver of light from the bottom edge detectable under normal viewing conditions. Likewise, uniformity across the panel is decent – the bottom left quadrant appears slightly brighter than the top section but it’s no worse than any monitors we’ve seen at similar price points. 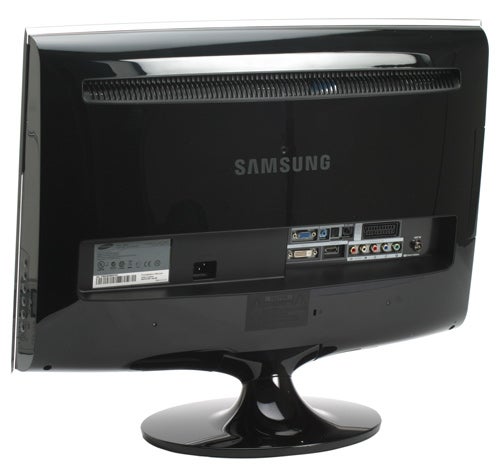 Where the T240HD does excel is in sharpness. Text in particular is sharp and well defined all the way down to 6.8 point Arial and this detail is borne out in high definition video and games, where there’s a pleasing crispness and clarity to images. There’s a 1:1 pixel mapping mode, labelled simply as ’16:9′, so 1080p sources are displayed properly with no scaling, though anything less than 1080p is scaled to fit the screen while retaining the original aspect ratio.


Motion handling is a little less impressive and like SD content, the lack of a typical TV’s more advanced picture processing is at fault. Slow panning shots produced a slightly irritating level of judder and games like FIFA 08 or Pro Evolution Soccer 2008, titles that are quite challenging in terms of motion, highlighted the ghosting and smearing that to an extent is unavoidable in an LCD monitor or TV. 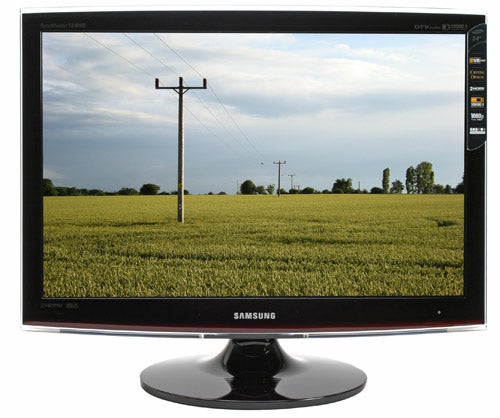 Despite some obvious weaknesses, however, we still come out rather liking the T240HD. Not enough, perhaps, to recommend it unreservedly, but nothing we’ve seen combines the style and versatility of a TV with the practicality of a monitor as well as it does. It boasts prodigious connectivity and though not outstanding as a TV or a monitor, it’s more than good enough for most needs and offers a resolution that can handle high quality sources and make them look good, too.


It may not be the best TV or monitor around, but as a combination of the two the Samsung T240HD is pretty decent and if its versatility and style suit your needs, there can be little arguing over the price either.