As I’ve remarked before, Samsung produces a huge range of digital cameras. With a compact camera line-up of 35 different models there’s something to suit almost everyone. The new ST5000 is a mid-sized compact featuring a 14.2-megapixel sensor, a high quality Schneider-Kreuznach f/3.3 – f/5.5 7x zoom lens equivalent to 31-217mm, 720p HD video with stereo audio, and a big 3.5-inch touch-screen active-matrix LCD monitor with the highest resolution of any current compact camera. It’s an impressive camera from a company that up until about five years ago was still producing cheap low-quality plastic compacts. 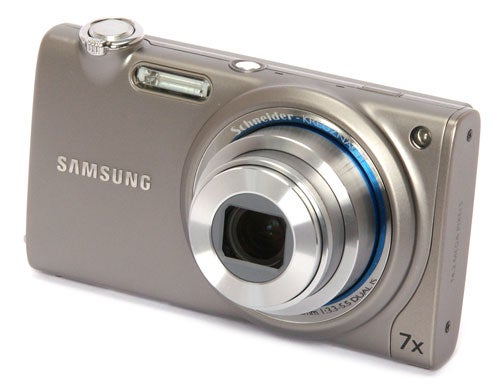 The ST5000 is a good-looking camera, and very well made. It has a half-metal, half-plastic body, but at first glance looks like it’s all metal. The build quality is excellent, the styling is sleek but understated, and the camera looks and feels a lot more expensive than it really is. It is available in matt black, a dark rust orange or the metallic gunmetal grey shown here, all with chrome trim. It’s quite large and heavy as compacts go, measuring 103.8 x 58.3 x 19.6mm and weighing in at a fairly hefty 179g including battery and memory card. 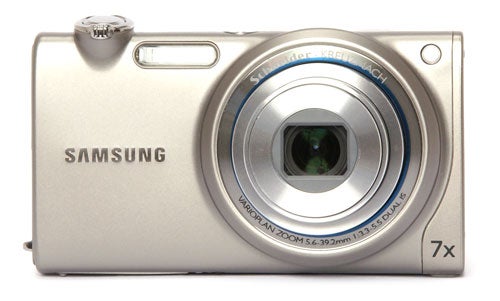 In terms of competition the ST5000 is difficult to place. It is on sale from some high-street shops for as much as £279, which puts it firmly into the luxury category alongside the very similar Panasonic FX70, the Canon IXUS 300 HS or even the Sony TX1, but shopping around online it’s possible to find the ST5000 for as little as £172, which is a very good price for a camera of this quality.

Samsung’s ST series includes some of it’s more adventurous designs, with unique models such as the GPS, WiFi and Bluetooth-equipped ST1000, or the ST500 with its second front-mounted monitor. The ST5000 has several unusual features, but the most obvious is its big 8.9cm (3.5-inch) touch-screen monitor, the same screen as the ST1000. It has a resolution of 1,152,000 dots, more than four times the resolution of most compact camera monitors. As far as I am aware it’s the highest resolution monitor currently available on any digital camera, including digital SLRs, which usually top out at 920k. 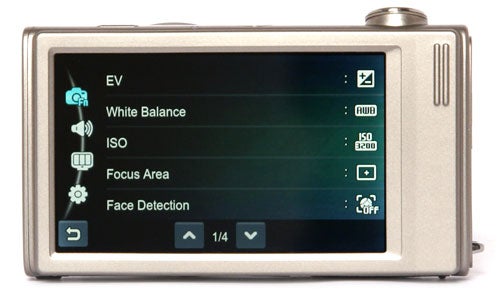 Despite the huge monitor screen, the large size of the body still leaves plenty of room down the right-hand side of the body to hold the camera, and an angled lip and small textured area provide a good secure grip without obscuring any of the screen. One unusual aspect of the body design, which the ST5000 shares with the ST70, is that the bottom of the camera and the feet are designed so that when the camera is placed on a flat surface it is tilted slightly upwards. Fortunately it does balance rather better than the ST70, and is easy to position for a self-timer shot.


The touch-screen interface is well designed, with hidden fly-out sidebar menus that control most of the camera’s functions without need to delve into the main menu. The button zones are big enough even for my huge fingers, and it operates quickly and smoothly, with audio feedback whenever a button is pressed. As well as the touch-screen the ST5000 also has an accelerometer, and some functions in playback mode can be controlled by tilting the camera.


The ST5000 is basically a point-and-shoot camera, but it does offers some creative customisation. The menu offers Photo Styles, a series of colour effects and filters such as soft, vivid, retro and others, including a manually adjustable RGB filter. As well as this it has Smart Filters, more advanced digital filters such as miniature effect, vignetting and two levels of fish-eye lens simulation. Other menu options include the Auto Contrast Balance, which enhances shadow detail in high-contrast lighting. 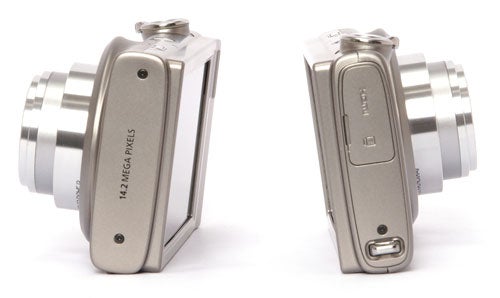 Like most current compacts the ST5000 can shoot video at 1280 x 720 resolution and 30fps, but unusually it includes stereo audio, recorded by a pair of built-in microphones mounted on the top panel just above the lens. Like most Samsung cameras the zoom lens can be used while recording, with the option to mute sound recording while zooming so that the motor cannot be heard on the soundtrack. Video is recorded in MP4 format, and overall picture quality is good, but the microphones are almost completely non-directional and are quite prone to wind noise. It has an HDMI socket for video output.


One important point to note is that like the ST70, the ST5000 uses MicroSD cards for removable storage. This isn’t a problem as such, but they are very fiddly, and anyone who has a number of SD cards already may be annoyed at having to replace their existing memory cards.

In terms of performance the ST5000 is very good. It starts up and can be ready to take a picture in less than three seconds, or four and a half if it needs to use the flash. In single shot mode it has a shot-to-shot time of approximately 1.8 seconds, which is very respectable, while in continuous shooting mode it can manage a frame every 1.3 seconds, although annoyingly the monitor screen remains blank while shooting in this mode. It also has Samsung’s usual “motion capture” mode, which shoots at 6fps for 30 shots, but only at VGA resolution.

The autofocus system appears to be the same as the ST70. It is quick and reliable, focusing in under half a second at wide angle, and only slowing down a fraction at full zoom. Low light focusing is also very good, just as fast as in normal light, and thanks to a good AF assist lamp it can focus in total darkness at a range of several meters.


Picture quality is also good, although there are a couple of caveats. Like most of Samsung’s premium models the ST5000 has a Schneider-Kreuznach branded lens, and the centre sharpness is suitably impressive. However it also has the usual digital distortion correction, and this does unfortunately result in some corner blurring. There’s no trace of chromatic aberration though. The zoom range of 31-217mm is a bit neither-here-nor-there by current standards, lacking both the ultra-wide and longer telephoto of come of its competitors.


Thanks to the quality of the lens, the 14.2-megapixel resolution of the sensor and relatively low compression in the highest quality mode the level of recorded detail is excellent, in fact among the best I’ve seen from a camera in this class. Colour rendition is also very good, with bright saturated tones and plenty of detail even in bright areas. Dynamic range is, unsurprisingly, rather limited, thanks to the tiny 7.76mm (1/2.3-inch) sensor. I really wish this wasn’t the standard size for compact camera sensors. Can 1/1.6-inch chips be that much more expensive to make? 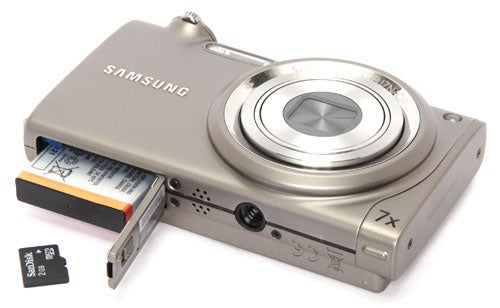 Another result of the tiny over-powered sensor is of course image noise, and here too it has a lot in common with the ST70. Noise effects are visible even at the lowest ISO settings, however the noise reduction system seems to be tuned to work best at 400 ISO, and at this setting it does produce results that are above average for its class. This quickly fades, along with the colour saturation, at higher settings, and the 3200 ISO maximum is best avoided.

The Samsung ST5000 is a solidly made and attractively designed camera with a lot to like about it, especially the price. The zoom range is better than average, although it lacks a bit at the wide-angle end. The touch-screen works well, performance is excellent, particularly in low light, and results are good in most situations despite the tiny sensor. 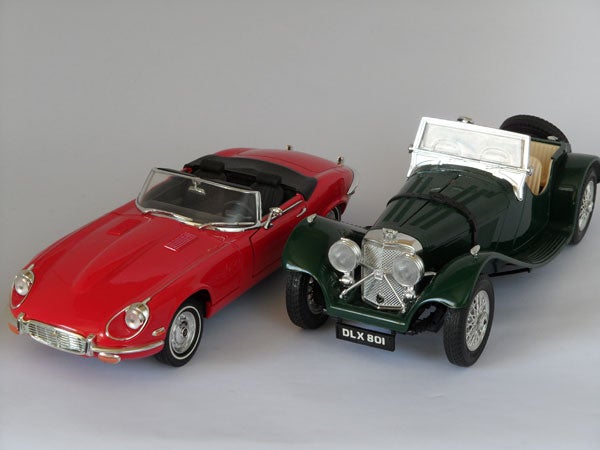 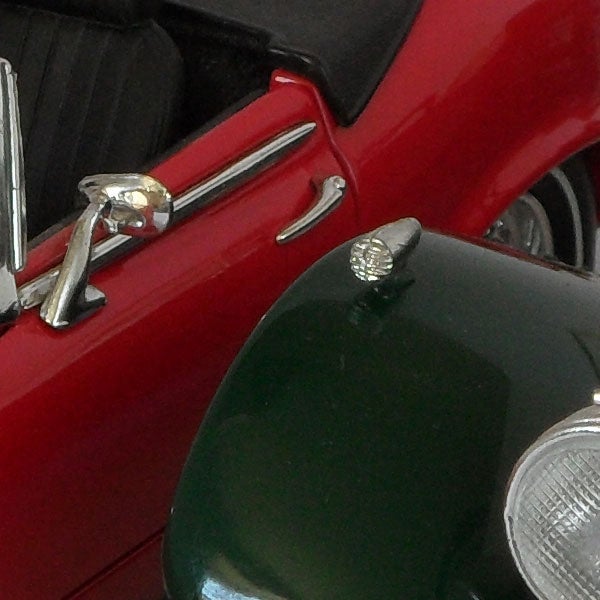 Even at minimum ISO the colour gradients are a bit blotchy. 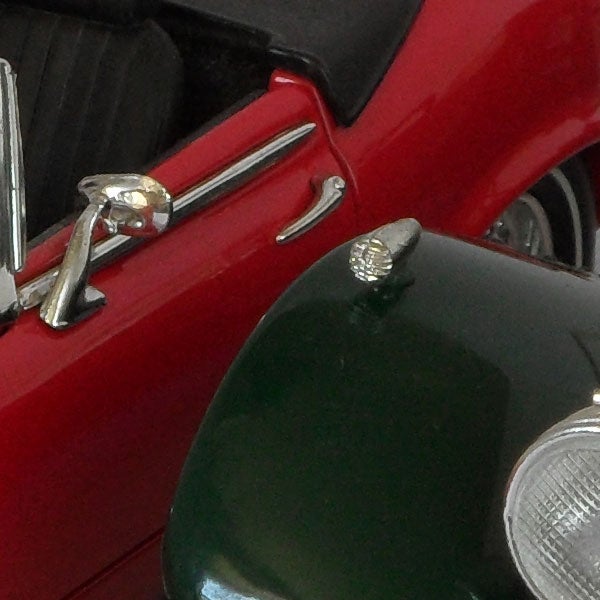 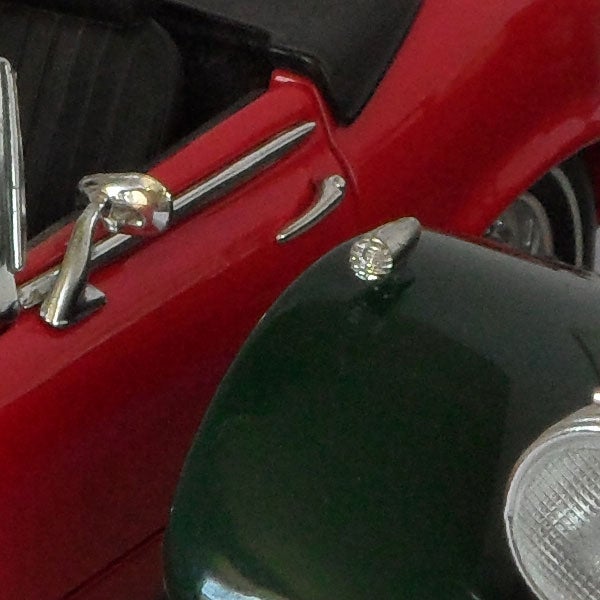 200 ISO is also about the same, although there is also some noise in the green channel. 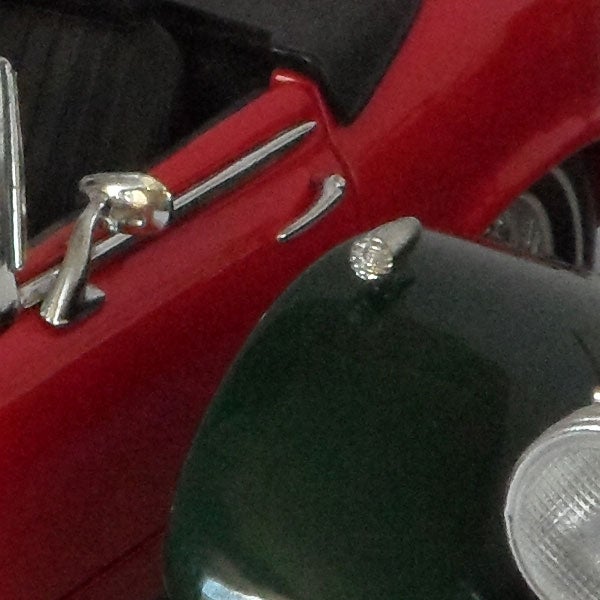 Colour gradients appear smoother at 400 ISO, but there is a bit of noise visible. 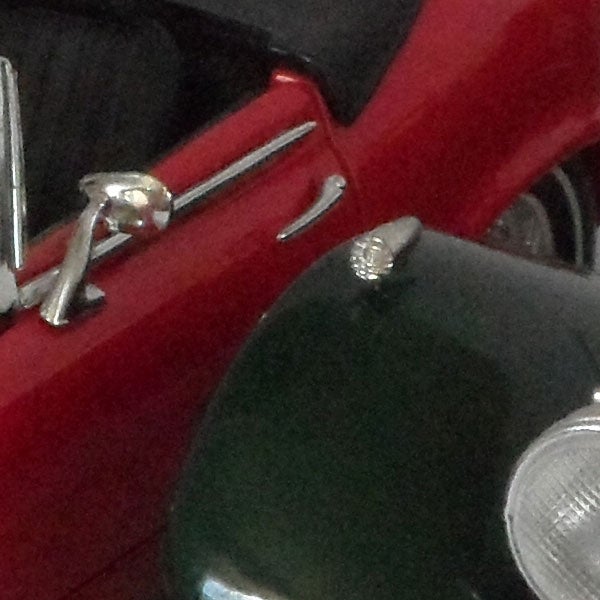 Noise is more of a problem at 800 ISO, but overall quality is still pretty good. 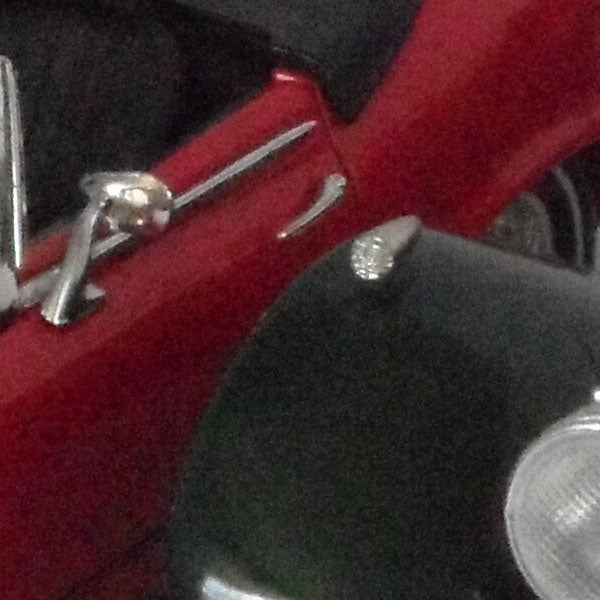 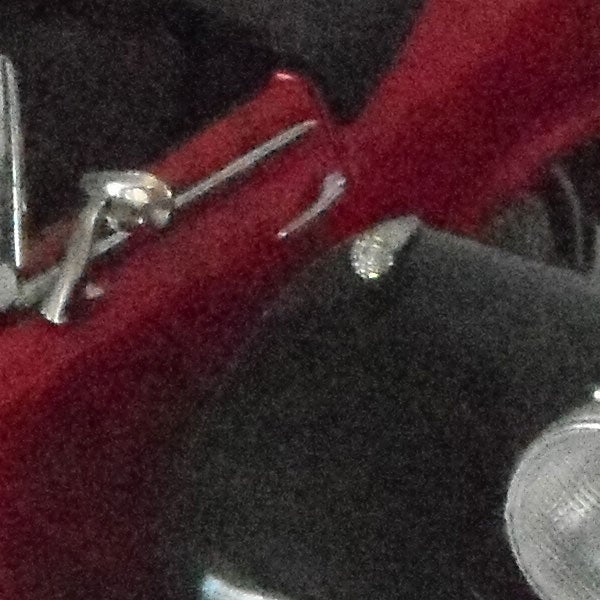 3200 ISO is pretty terrible, but is at least full resolution. 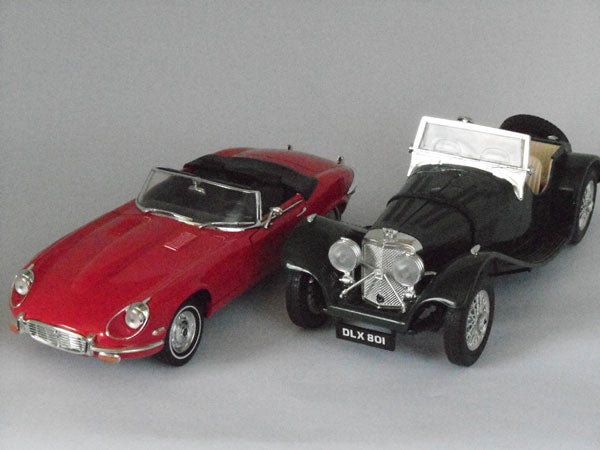 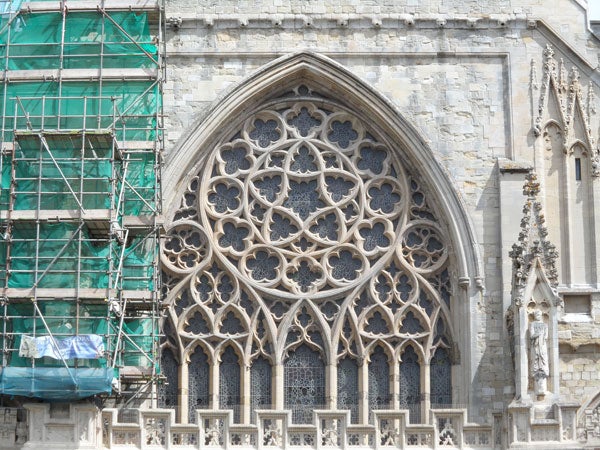 Here’s the usual detail test shot of the West Window of Exeter Cathedral, for you to compare with other cameras. See below for a full res crop, or click to see the whole picture. File size 6.7MB. 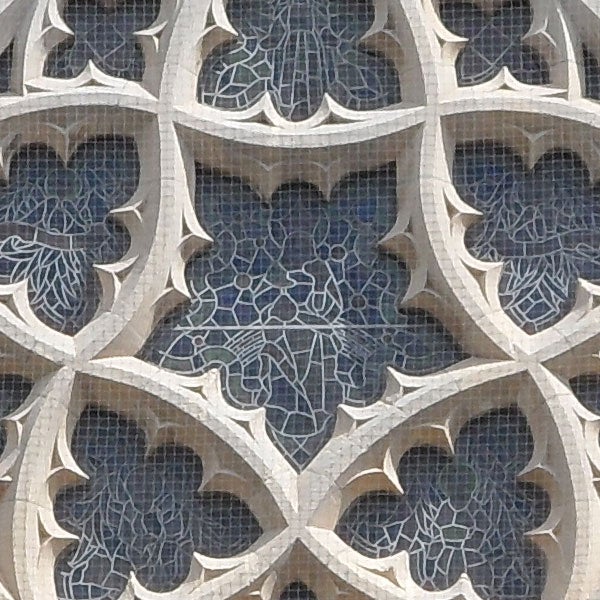 The level of recorded detail is excellent, among the best for a camera in this class. 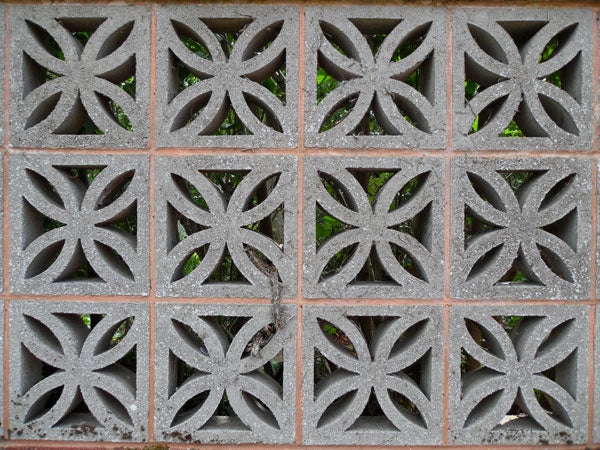 Wide angle barrel distortion is corrected digitally, as is usually the case with recent compacts. 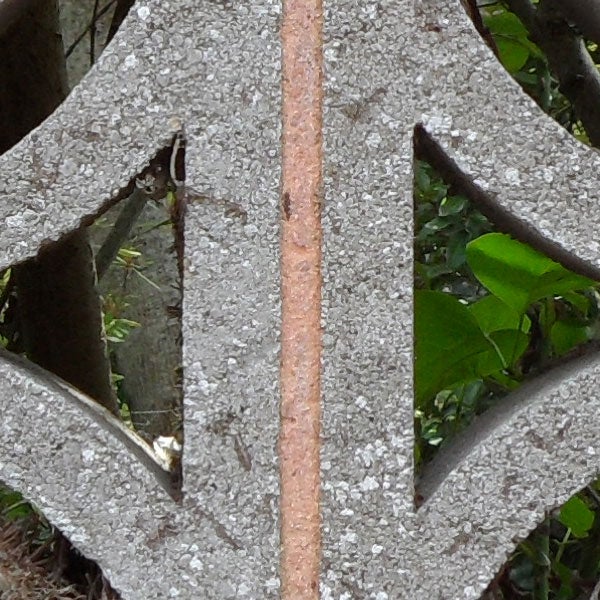 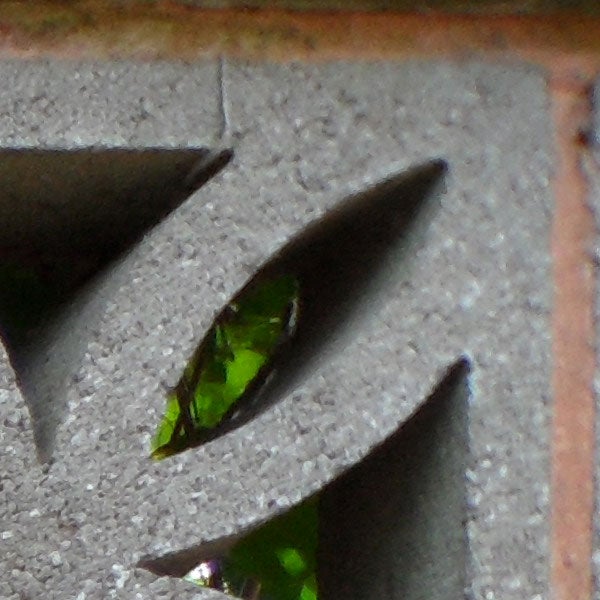 The digital distortion correction has produced some corner blurring. 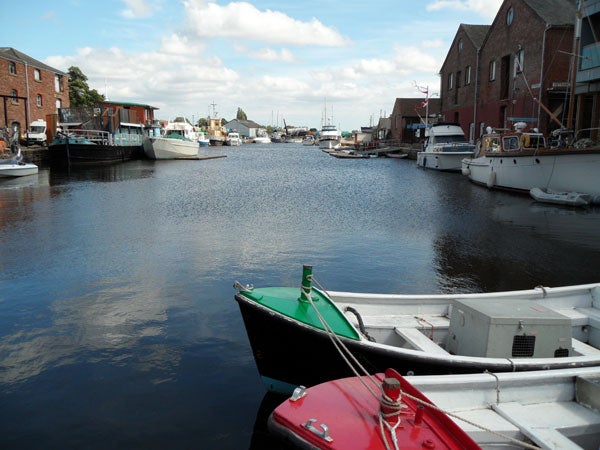 The wide angle end is equivalent to 31mm, not as wide as some rivals. 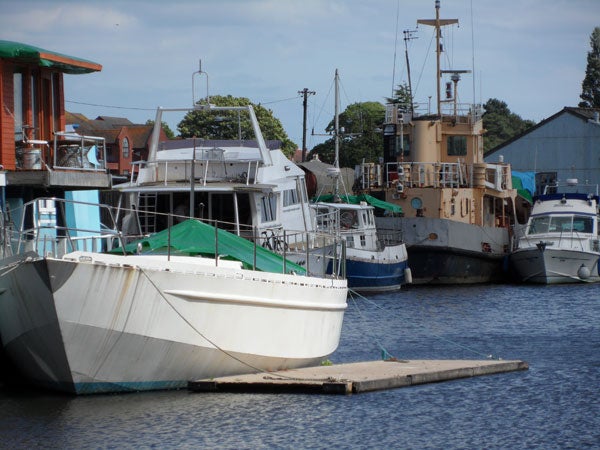 The long end is equivalent to 217mm, a useful medium telephoto. 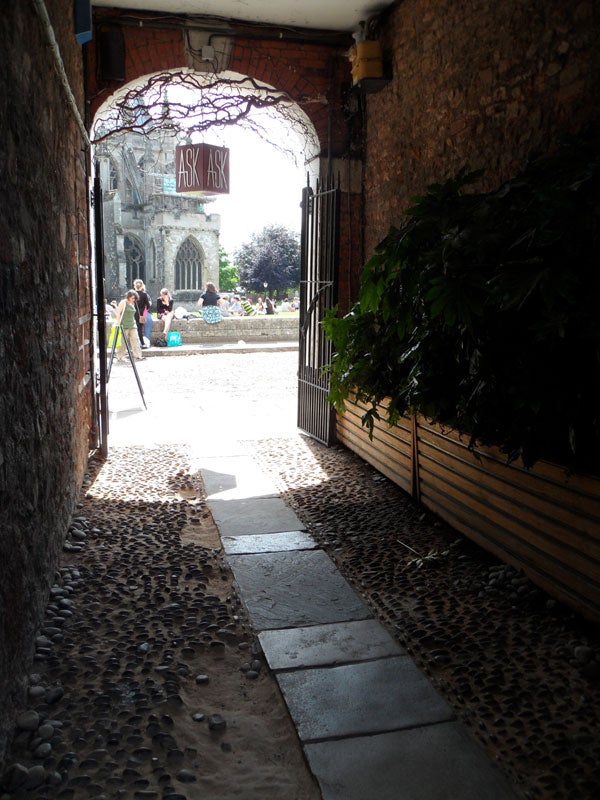 Dynamic range is limited, due to the small overcrowded sensor. 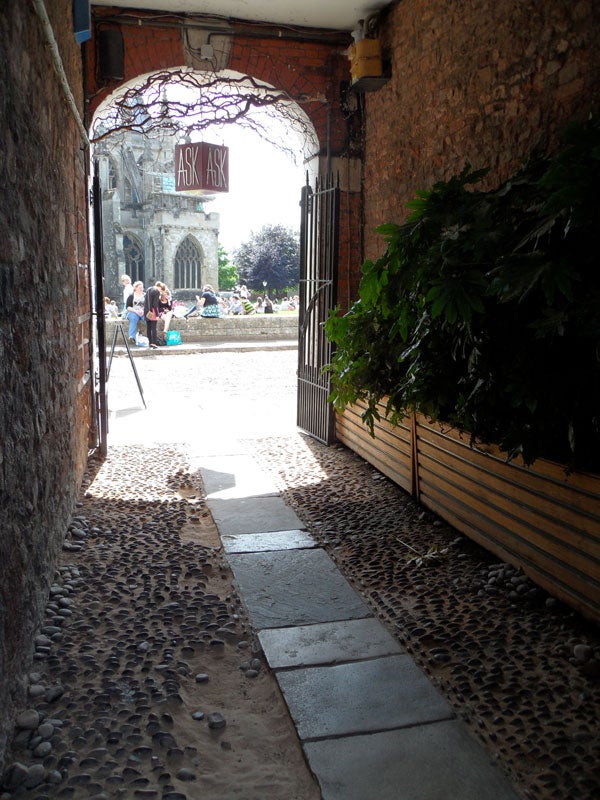 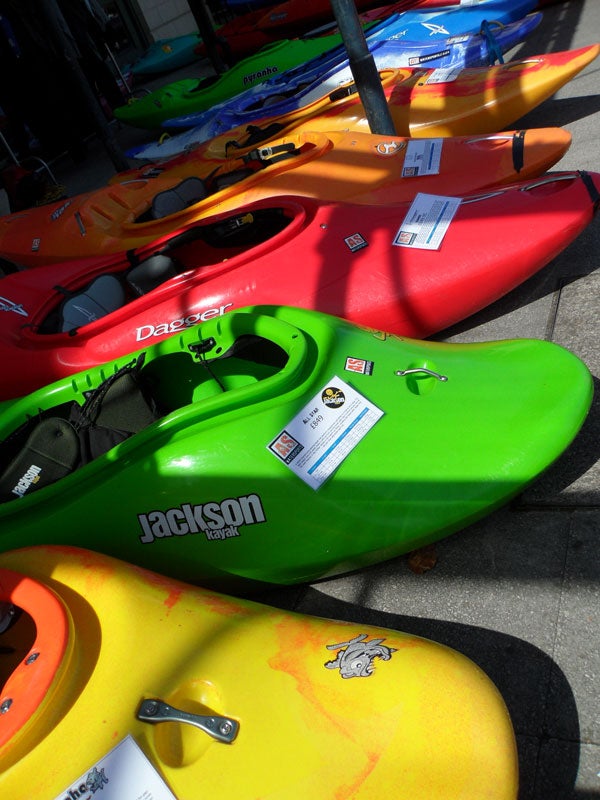 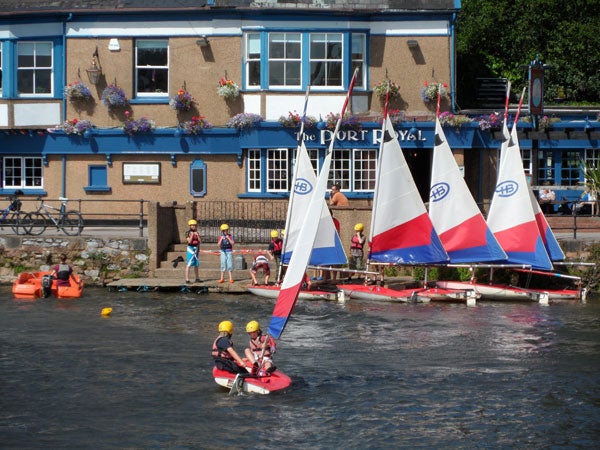 The fast focusing is good for quick action snapshots.