A couple of years ago Canon stood as the undisputed leader in virtually all areas of the digital camera market, but it has recently seen that lead disappear under a relentless onslaught from its many determined rivals, particularly Panasonic, Samsung and Sony. Even Canon’s prestigious Digital IXUS range, the benchmark of luxury compacts for over a decade, has seen its prices undercut and its position challenged by cameras such as the Panasonic FX60, the Sony WX1, the Samsung WB1000 and even the outstanding Casio EX-Z2000. There are really only two ways that Canon can respond to this; it can either cut its prices, or try to beat the opposition on features, performance and image quality. Typically, Canon has done both. First, it has introduced a couple of relatively affordable entry-level models including the IXUS 105. Second, it has launched a new flagship model for the IXUS range, the 300 HS which I’m looking at today. 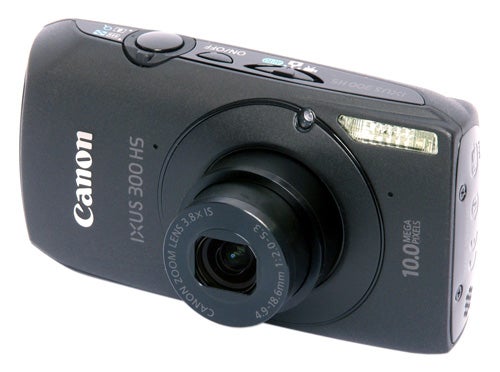 The IXUS 300 HS has a specification which, at least at first glance, doesn’t appear to be all that impressive. It has a 10.0-megapixel sensor, a 3.8x zoom lens and a 3.0-inch 230k monitor. However when you look a bit closer at the technical details things start to look a bit more interesting. The sensor is a newly-designed back-illuminated CMOS chip, offering significantly better light-gathering capabilities than conventional designs. The lens has a focal length range equivalent to 28-105mm, but more importantly it has a maximum aperture of an exceptionally fast f/2 at wide angle, again improving the low light performance. Special features include 720p HD video with stereo sound, 240fps high-speed video, 3.7fps full-resolution still shooting and optional manual exposure modes. 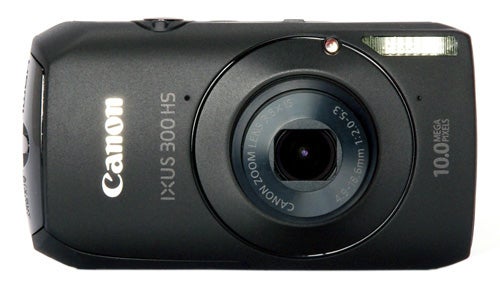 Of course all that super-fast technology doesn’t come cheap, and the newly-launched IXUS 300 HS is currently priced at a whopping £379 from both high street and online retailers. That price will almost certainly drop over the next few months (the IXUS 120 IS was £260 in January and now sells for around £180), but at the moment it is the most expensive pocket compact on the market. It’s only £40 less than the PowerShot G11, and there are quite a few digital SLRs that cost less. It’s somewhat annoying to note that in America the IXUS 300 HS (known over there as the PowerShot SD4000) is priced at $349, which at the current exchange rate is equivalent to approximately £240. Rip-off Britain, anyone?

As you’d be right to expect for such an inflated price, the build quality is superb and the overall design is stylish but functional. The body is all aluminium, and is available in either the rugged matt black seen here or in a sandblasted silver, glossy white or high gloss red finish. I’ve criticised some previous IXUS cameras for being slippery and difficult to hold, but the high-friction surface of the matt black version provides a very secure grip. Will the same be true of the red and white versions? 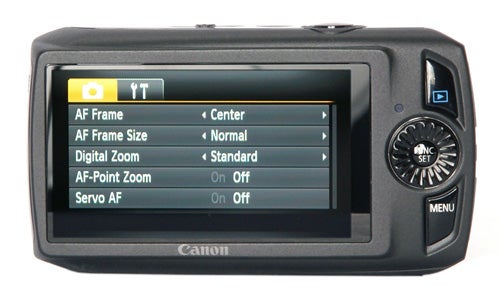 The shape of the body is quite complex, with both rounded and bevelled edges, but it has no protrusions and slips easily into a shirt pocket. It’s quite small, measuring 100 x 54.1 x 23.6mm, although at 175g including battery and card it is quite heavy for its size. My only real criticism of the design is that the rounded shape and very small bottom panel make it tricky to balance the camera on a surface for self-timer shots.


The control layout is very simple and elegant. The top panel carries the shutter button with a rotary bezel for zoom control, the on/off button and a three-position slider switch to select video, standard shooting or easy auto modes. On the back there are only two buttons, one for the main menu and the other for playback mode, and a D-pad with a central function button and a rotating bezel. This is used to navigate the very attractively designed sidebar menu that controls all of the camera’s main shooting options, of which there are plenty.


Unusually for a pocket compact the IXUS 300 HS offers aperture priority and shutter priority shooting modes, as well as the usual program auto. It also has a wide range of scene modes and colour effects, and some fun filters, such as fish-eye effect and a “miniature” effect, previously seen on the PowerShot SX210 IS (and shamelessly nicked from the Ricoh CX3). 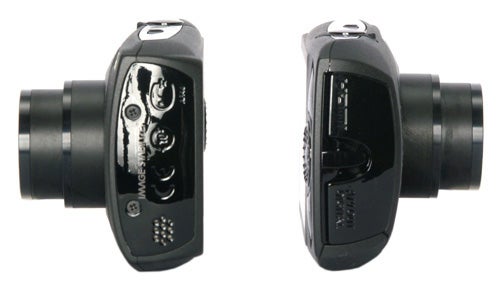 One stand-out feature is the video mode, which can shoot in 720p HD with stereo sound and full optical zoom. In video mode the zoom action slows down, making it quieter and smoother. Since the 300 HS has a CMOS sensor I was expecting it to suffer from the infamous “Jello effect” when shooting video, but it appears to avoid it somehow. It also has a high speed video mode which shoots at 240fps but plays back at 30fps, for an 8x slow motion effect.

Canon isn’t the first manufacturer to use a back-illuminated CMOS sensor; as usual that honour falls to Ricoh. In conventional sensors the wires connecting to the photocells run over the front of the chip, partly obscuring the light falling on it. In a back-illuminated sensor the wires come in from underneath, allowing more light through and improving low-light performance. The sensor has innately fast performance, which when combined with Canon’s high-speed DIGIC 4 processor gives the 300 HS some impressive performance figures.

It starts up in approximately two seconds, and in single-shot mode it has a shot-to-shot time of approximately 2.3 seconds, which is actually not that fast, but it is the continuous shooting modes which excel. It can maintain 3.7 shots a second at full 10MP resolution, or 8.4 shots a second in the 2.5MP high-speed continuous mode. However it’s worth noting that the Ricoh CX3 can beat it soundly on all counts and costs £80 less.


The main reason the single-shot shooting speed isn’t as fast as expected is that the autofocus system isn’t anywhere near as fast as I’d usually expect from a Canon camera. It takes almost a second to focus even in good light, and in low light it does appear to pause briefly before activating the AF assist lamp. Focusing is reliable and accurate though, even in low light, and the AF assist lamp has a range of several metres.


The f/2 lens does provide some advantage in low light shooting, but it’s not as great as you might hope. It’s only a one-stop advantage over the IXUS 110 IS, and it’s only f/2 at the widest zoom setting. The aperture drops very quickly as soon as you zoom in, with a maximum of f/5.3 at full zoom, which is not much faster than most other comparable compacts. 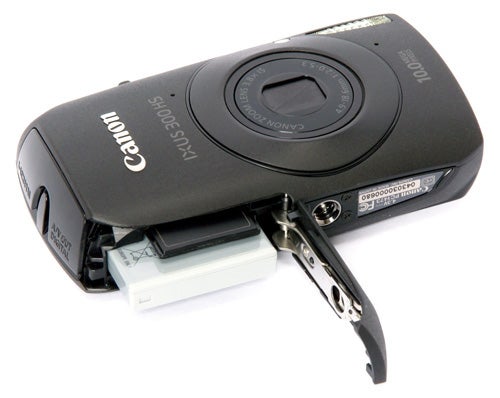 The lens does produce good edge-to-edge sharpness though, with minimal wide-angle distortion. There is a little chromatic aberration visible at the corners of the frame, but it’s not too obtrusive. The overall level of detail is very good for a 10MP compact, although it’s not as good as Canon’s own PowerShot S90. With a file size of around 3MB the compression is a bit higher than I would have expected, but overall image quality is very good, with superb colour rendition, flawless exposure and excellent dynamic range thanks to the advanced sensor design, especially with the i-Contrast feature enabled. Noise control is also exceptionally good, with virtually no visible noise at 800 ISO and usable images even at the maximum 3200 ISO, which is a remarkable performance for a small-sensor compact.

The IXUS 300 HS is a very good camera, with a nice easy-to use controls, a good range of features, decent performance and excellent image quality, especially at higher ISO settings. Build quality and handling are very good, and the design looks stylish and contemporary. However it doesn’t offer any decisive advantage over cheaper products from rival manufacturers, or even some of Canon’s own other models, and the ludicrously high price is a major disincentive. If it comes down to around £250 you can add another point to the overall score. 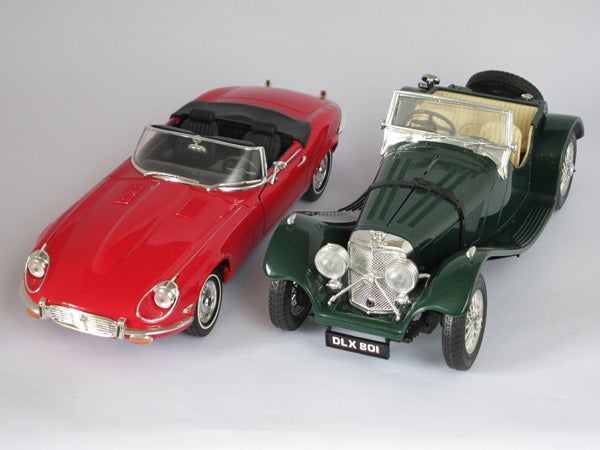 This is the full frame at the minimum of 125 ISO. 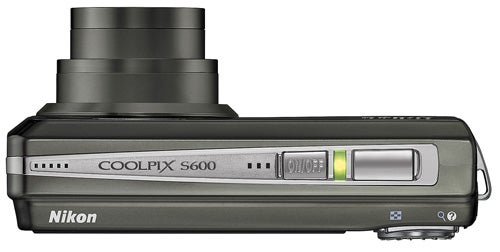 At 125 ISO the image quality is virtually flawless. 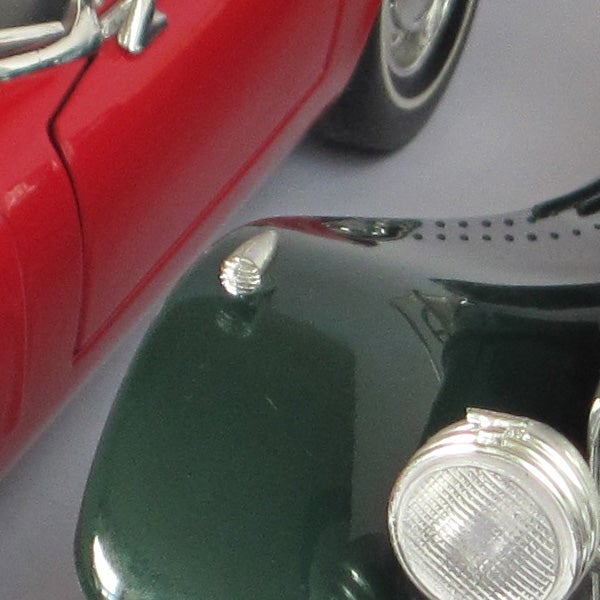 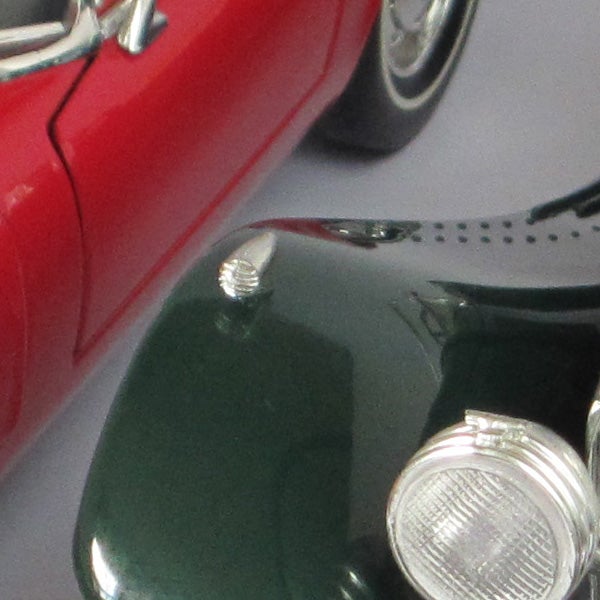 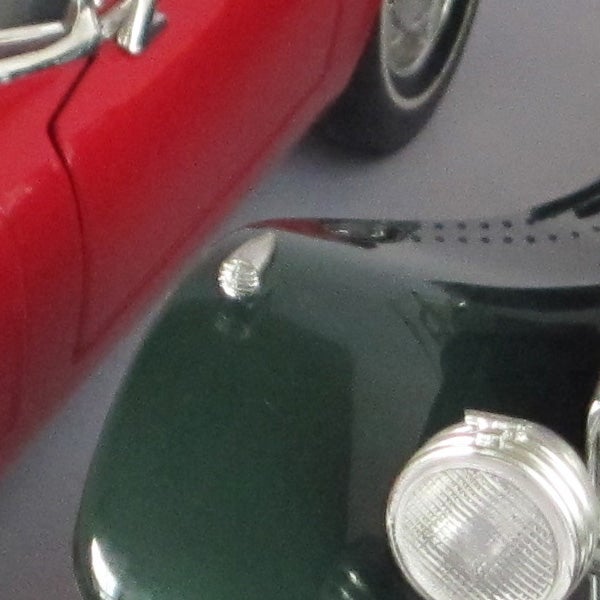 Noise reduction has blurred some detail at 800 ISO, but image quality is still very good. 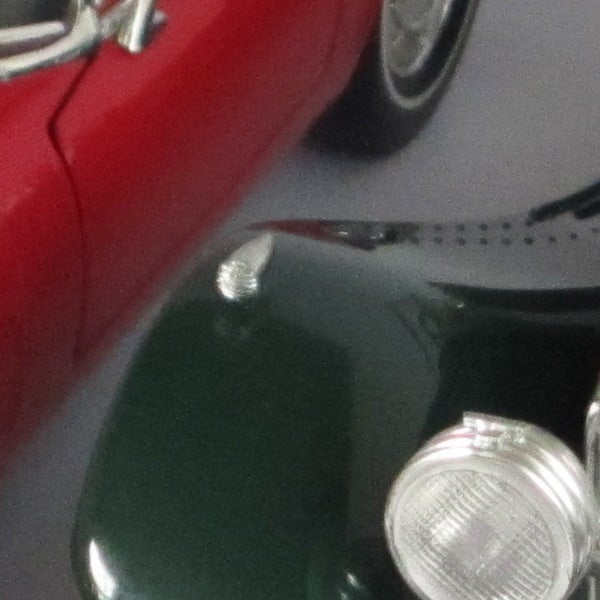 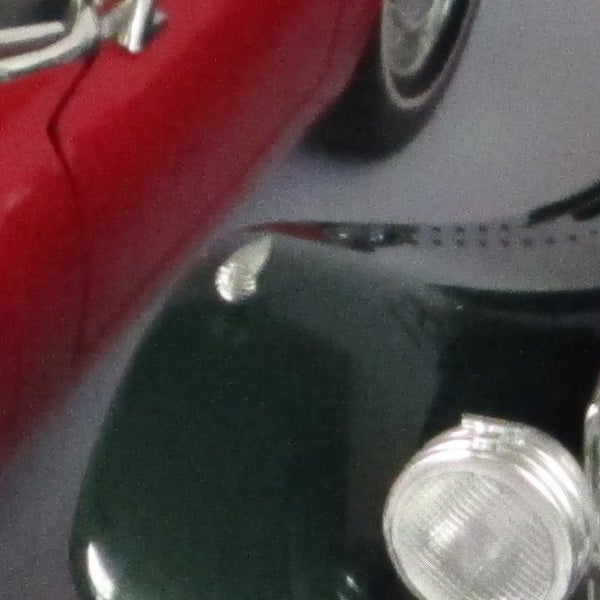 Even at 3200 ISO the image is still printable. 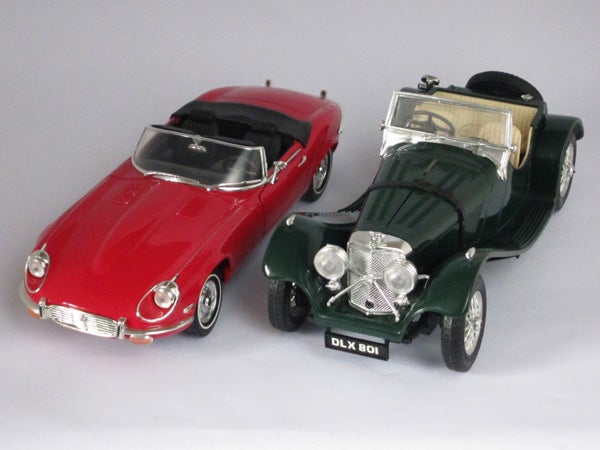 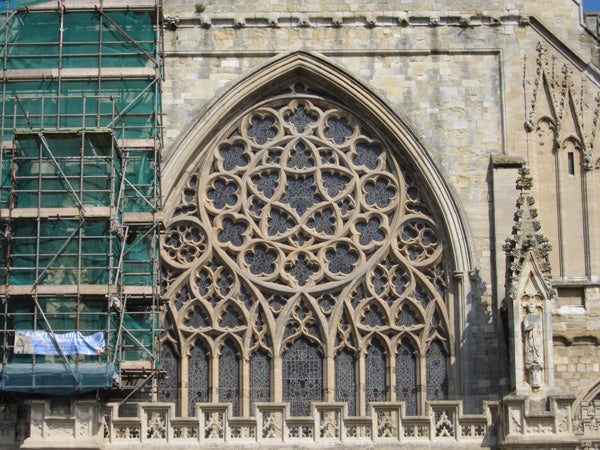 Here’s the usual detail test shot of the West Window of Exeter Cathedral, for you to compare with other cameras. See below for a full res crop, or click to see the whole picture. The downloadable file is approximately 3.1MB. 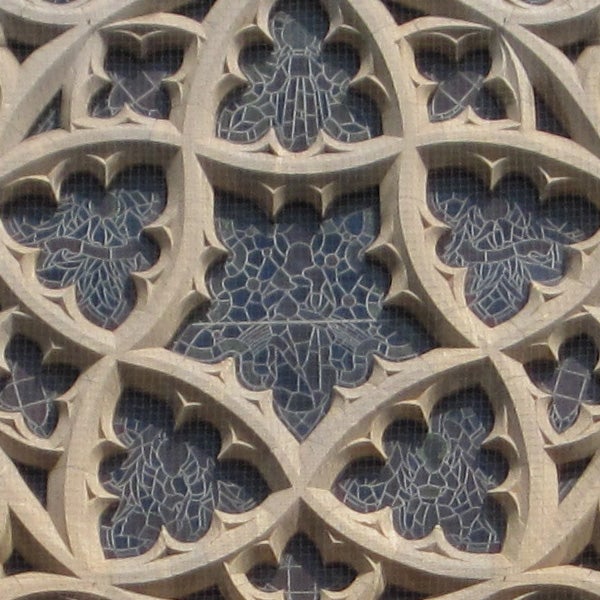 The detail is very good for a 10MP camera, but compare it with the Canon S90. 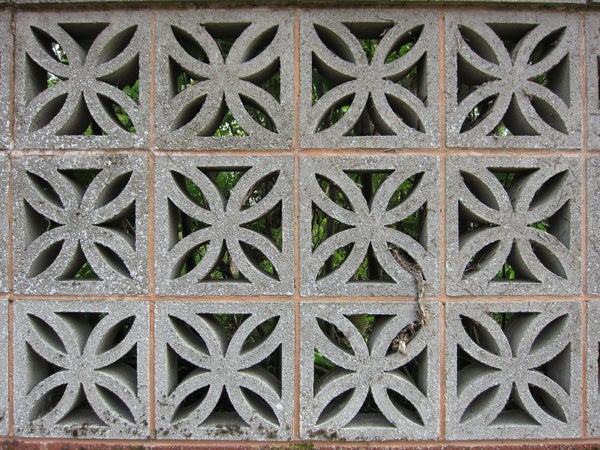 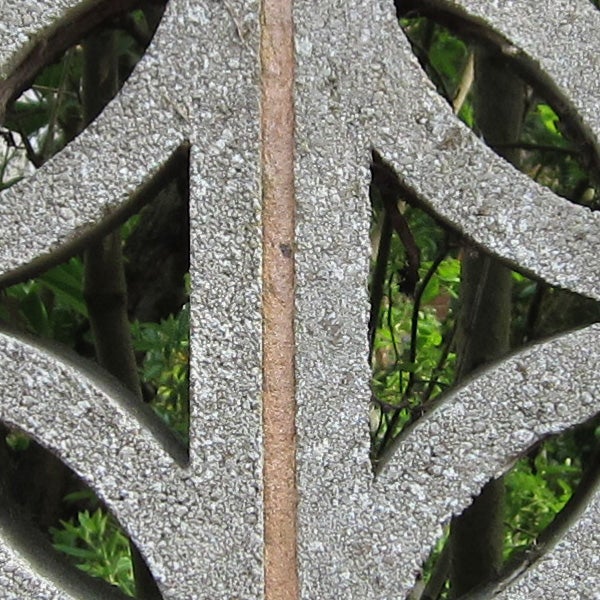 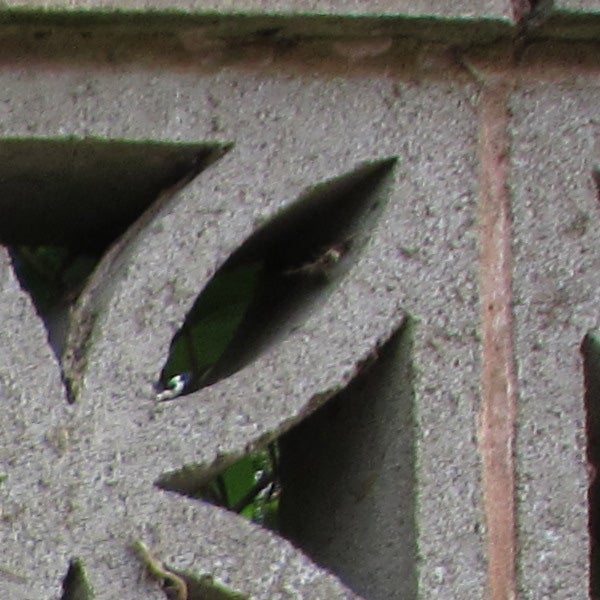 Corner sharpness is also very good, but there is s little chromatic aberration. 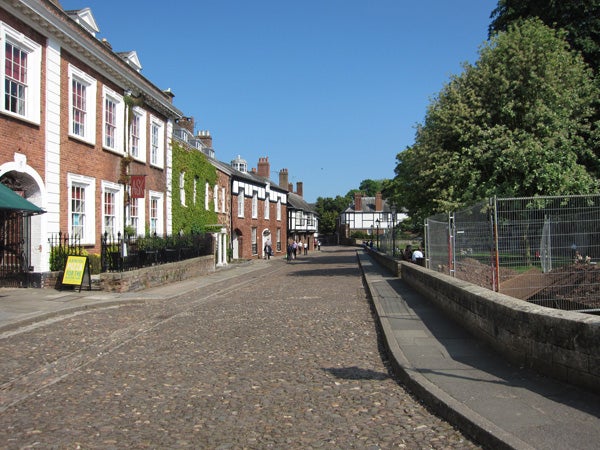 The wide angle is equivalent to 28mm. 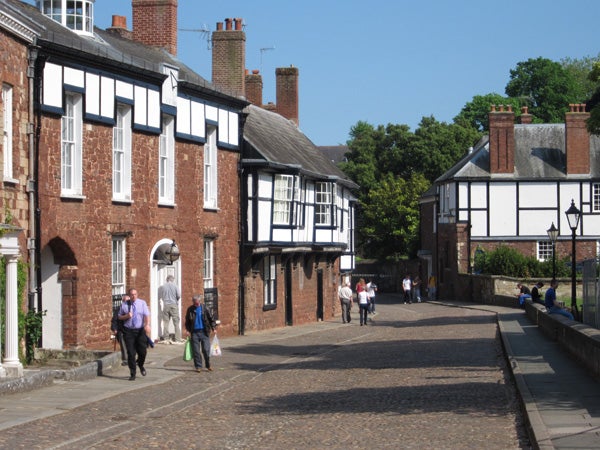 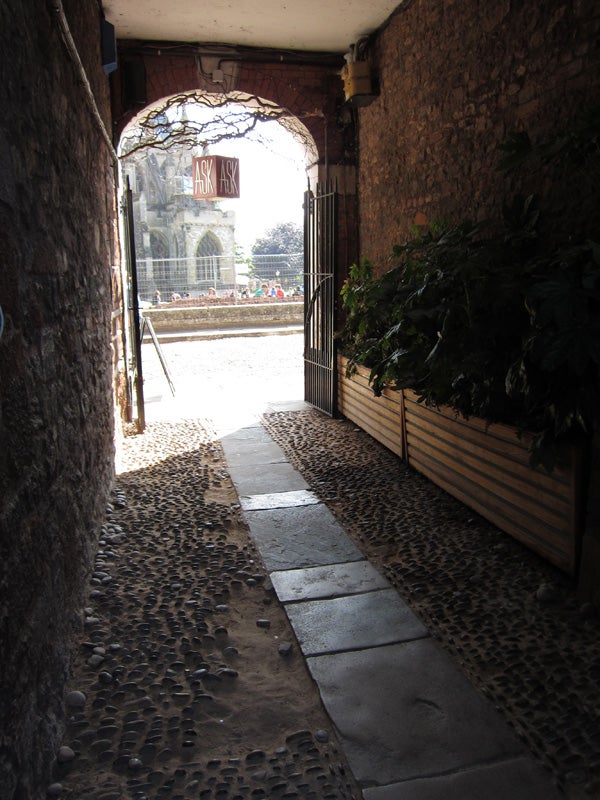 Dynamic range is good even without the i-Contrast turned on. 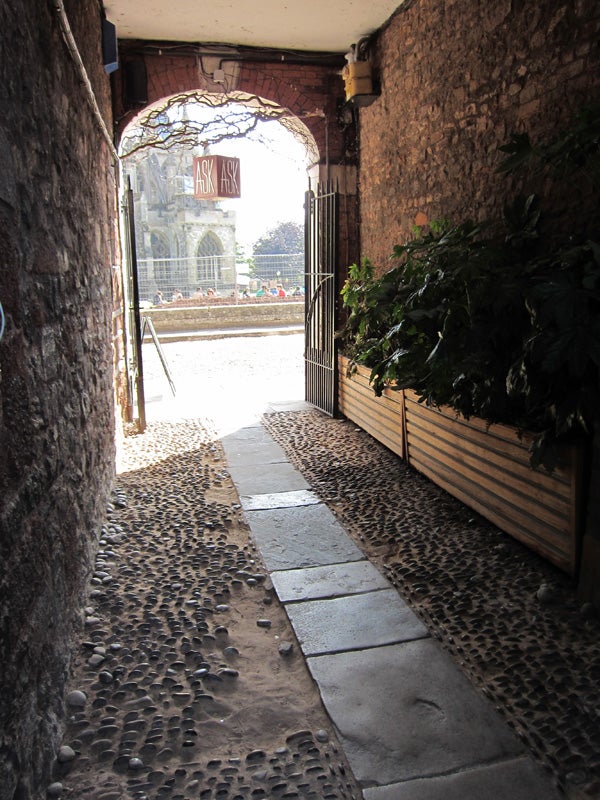 With i-Contrast on the dynamic range is much better than most of its rivals. 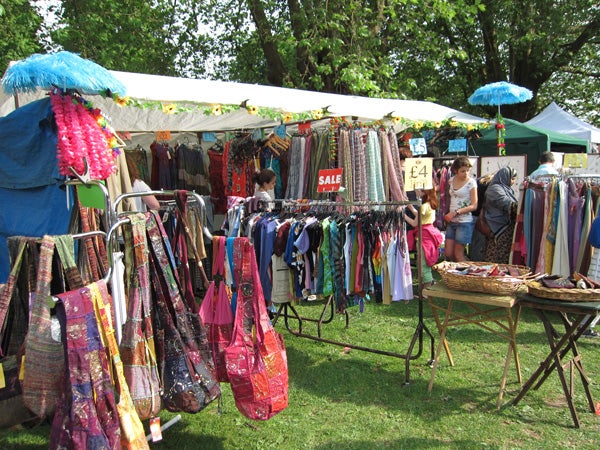