Not content with shaking up the Freeview HD PVR market with its Smart Hub-equipped BD-DT7800, Samsung is also looking to make its mark in the Freesat PVR world. The SMT-S7800 boasts an attractive spec-sheet that’ll give established Freesat recorders a run for their money.

What’s more, it’s a great-looking recorder. In true Samsung style the SMT-S7800 boasts a deep gloss black finish with an eye-catching transparent plastic trim running along the bottom of the front panel. It also sports a row of touch-sensitive buttons to control menus and other key features, plus a 12-character scrolling display panel that shows the full channel name. It’s a beautifully built unit that’ll stand the test of time in your AV rack.

There’s a USB port on the front, which reveals that this unit, like most of Samsung’s products, supports media playback from storage devices (but external HDDs are not supported).

There’s a generous array of connections on the back too, including an HDMI output that pings those hi-def pictures to your TV, as well as composite, optical digital and stereo audio outputs, an Ethernet port and a second USB port for media playback or for connecting an optional Wi-Fi adapter. On the side is a common interface slot that will allow you to add pay TV channels if services ever come to Freesat.

The line-up is completed by two LNB inputs (one for each tuner) and two Scart outputs, which allows you to output AV signals to a TV and recorder simultaneously – handy if you want to archive HDD recordings on disc.

The SMT-S7800 features two Freesat tuners, and unlike the BD-DT7800 you can record two channels simultaneously, which is a hugely important talent. It will even let you watch a third channel while two recordings are in progress, but only a handful of channels.

There’s a 500GB hard-disk on board which can store 120 hours of high-definition recordings or 250 hours of standard definition programmes. That capacious hard-disk, which is larger than the Humax FOXSAT-HDR’s 320GB HDD, will also hold music, video and photo files that can be copied over from USB devices.

Although the SMT-S7800 lacks the brilliant Smart Hub internet content portal found on the BD-DT7800, it does grant you limited online functionality through the scaled-down Samsung WebTV portal. At present this only includes access to YouTube. 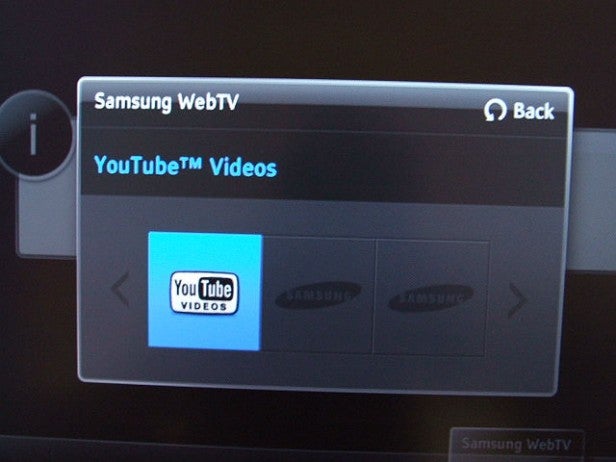 However the SMT-S7800 also supports BBC iPlayer and ITV Player but they’re listed as channels in the EPG (channels 901 and 903 respectively) and not in a dedicated interface, which makes them a bit of a pain to access. Only iPlayer is available at present, with ITV Player listed as ‘coming soon’.

Elsewhere the SMT-S7800 boasts all the basic PVR functionality you could hope for – pause/rewind live TV, series link and timer scheduling directly from the EPG – as well as versatile scanning and slow-motion features when playing back your recordings. There are no editing options, but its hardly essential on a deck designed for you simply watch and delete recordings.

As well as all the prescribed Freesat functionality, you can also switch to a non-Freesat mode and automatically scan for channels on any of the available satellites, or there’s a manual scan mode which lets you change the parameters (frequency, polarity etc). The channels appear in a separate EPG when found, and we even managed to record programmes from other satellites.

Boot up the deck for the first time and you’re welcomed by a small dialogue box inviting you to enter the initial settings, which include language, resolution, aspect ratio and antenna setup. After detecting the satellite signal and finding your region through a postcode search, it launched straight into the channel search, finding 135 TV and 38 radio stations in around a minute.

The main menu’s pure eye candy but not at the expense of practicality. It uses a row of icons along the bottom of the screen, with each option represented by a brightly-coloured graphic that flips round when highlighted. From here you can zip straight to the EPG, recording library, your media (HDD, USB or network) and Samsung WebTV. One day all menus will be this slick. 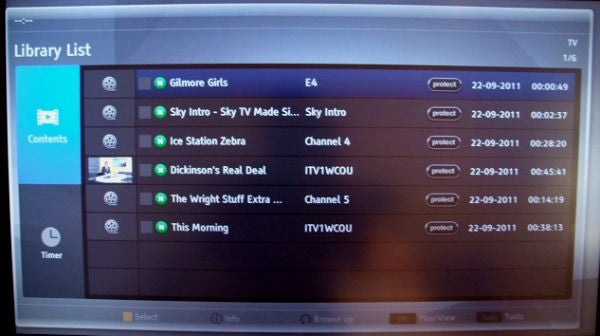 In fact there isn’t a weak link in the onscreen design. The recording library uses a clear list structure, giving all the relevant details (title, date, channel, duration and an icon denoting new recordings) and providing a pop-up menu with limited editing options (protect, rename, that sort of thing). A separate submenu shows scheduled recordings. 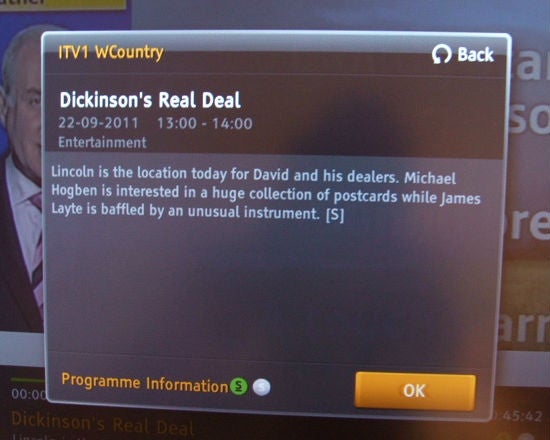 The eight-day EPG is equally well presented, stuffing an eight-channel programme grid, a live TV screen, colour-coded options and the synopsis into a single screen – no mean feat. Like all Freesat EPGs you can initially filter the listings by genre.

There are also onscreen banners that let you browse the entire schedule 24 hours ahead without having to access the full EPG. This beautifully presented display is peppered with little icons giving lots of info about each programme.

Other small menus like Tools and Channel List are superimposed over the picture and provide helpful shortcuts, while the Setup menu makes it a doddle to tweak any option, from digital audio outputs to satellite channel management. 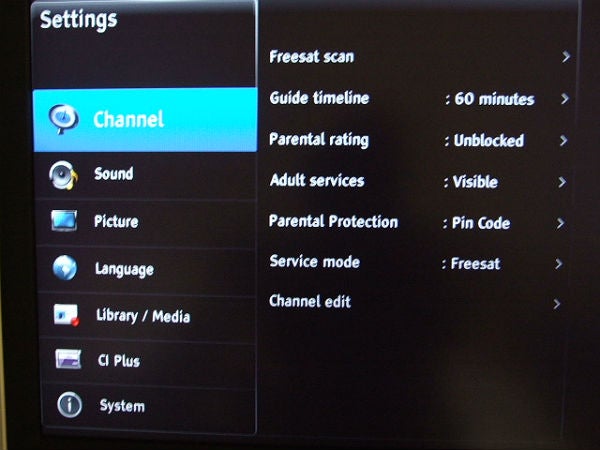 Meanwhile the Media menus and YouTube work brilliantly, particularly the latter, which streams videos without a glitch and packs its wealth of content into a series of logically presented menus with easily accessible playback controls. Network streaming is a neat bonus but the format support is fairly limited (just XviD, MP3 and JPEG) and we initially had trouble getting it to recognise content on our Windows 7 laptop.

One final operational note concerns the remote, which may not look particularly glam but is as fine a piece of handset design as you’re likely to see. The buttons are tidily and ergonomically arranged for maximum thumb comfort (thumbfort?) plus they’re nicely sized and clearly labelled.

Pictures from any of the hi-def channels look stunning, particularly BBC HD, whose worthy dramas and documentaries have an extra beauty and panache about them anyway.

Detail is resolved with impeccable clarity, colours blaze with vibrant intensity (without much banding or MPEG block noise) and even when there’s loads of movement the picture stays nice and composed. Record them and you’ll get exactly the same picture quality.

SD pictures inevitably look soft by comparison, which is down to some slightly-too-prevalent MPEG artefacts, yet the images are always watchable, thanks in part to the Samsung’s skilful 1080p upscaling.

It’s a shame that it doesn’t offer an HD option when watching BBC iPlayer though, as the quality of streamed videos is mushy. But YouTube vids look much more impressive and we didn’t have to endure a single buffering break.

Sound is clean and audible at all times, and if you’re hooked up to a sound system the unit outputs Dolby Digital and Dolby Digital Plus when available, as well as DTS.

Verdict
Overall the SMT-S7800 is a very capable Freesat recorder, but it’s a shame the Samsung’s Freesat team couldn’t have got round a table with the Freeview/Blu-ray guys and found a way to bung Smart Hub and better DLNA functionality into this machine.

That’s the thing that sets the BD-DT7800 apart from the competition, but without it the SMT-S7800 doesn’t have a significant edge over rival boxes like the Humax FOXSAT-HDR. YouTube and iPlayer are welcome, but make us feel like losing Bullseye contestants being shown the Smart Hub speedboat they could have won.

Still, there’s loads to admire, such as the hassle-free operation, gorgeous onscreen graphics, great pictures and a full gamut of Freesat (and non-Freesat) functionality. It’s not even that expensive, which means it’s still a worthy purchase despite the lack of Smart Hub, although we cant help but wonder how much better it could have been.