‘Make your TV smarter’ is the slogan emblazoned on the box of Samsung’s latest Freeview HD PVR, which means that as well as allowing you to watch and record Freeview programmes it brings you a whole host of extra content from the internet and networked devices around the home. That gives it an advantage over most other Freeview PVRs on the market, and although the price is quite steep, Samsung’s typically generous feature list means you certainly get a lot for your money.

There are two DVB-T2 tuners on-board and a 500GB hard-disk drive, which allows you to record up to 130 hours of hi-def programmes or 208 hours of SD. This may not be enough to satisfy hardened TV fanatics for whom nothing less than 1TB will do, but most users should find it sufficient.

The BD-DT7800’s design is a break from the usual black-box norm, opting for a glitzy brushed silver finish on the fascia, a transparent strip running along the bottom and an eye-catching blue light bang in the centre. Set into the front panel is a row of touch sensitive controls – also a rarity among PVRs – that let you record, stop and change channel, as well as a display panel that shows the time and channel number when you switch over. Overall build quality is superb too.

Under a flap on the right you’ll find a USB port, adding yet another way of watching your digital content, while a CAM slot on the side makes it possible to add pay TV channels. Around the back the connections panel is identical to that of Samsung’s BD-D8500 and D8900 Blu-ray/HDD combis. You get HDMI, component, composite, optical digital audio and analogue stereo outputs, alongside an Ethernet port for your wired networking needs plus RF input and loopthrough.

Anyone who has read our reviews of Samsung’s latest Blu-ray players will know what features to expect from this PVR. Samsung’s Blu-ray and set-top box divisions have merged, which means this recorder benefits from all the same networking tricks, format support and web content as the brilliant BD-D6900 and BD-D8900. It also explains why the features and menu architecture on this PVR differ from Samsung’s Freesat PVR, which comes from a different division (look out for our review soon).

So where to begin? AllShare DLNA media streaming is perhaps the most alluring feature, as it’s not something you’ll find on many other Freeview PVRs. It means you can play music, video files and view photos stored on PCs, NAS drives and smartphones on your home network, and the inclusion of built-in Wi-Fi makes it really easy to do. Setup is a cinch and like most Samsung products the unit handles a wide range of media formats, including MKV, WMV, DivX HD, Xvid, MP3, WMA, JPEG and many more.

If you’re not networked-up you can play your media files from USB flash drives and external HDDs. What’s more, you can copy files freely between your network, USB devices and this unit’s HDD. 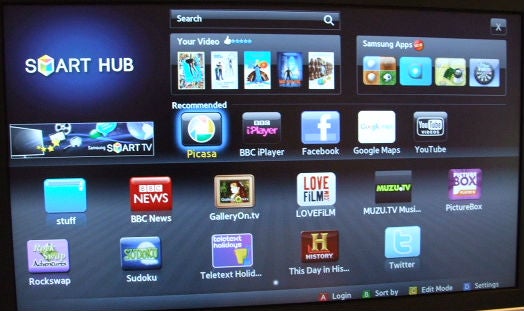 Another reason why the BD-DT7800 steals a march on most Freeview PVRs is the inclusion of Smart Hub, Samsung’s brilliant selection of internet applications. Here, you can stream videos from BBC iPlayer, BBC News or YouTube, check your Facebook and Twitter accounts, view photos on Picasa, watch movies on demand from LoveFilm or keep yourself entertained with a vast array of games and puzzles. That’s just the tip of the iceberg too – in the Samsung Apps store you’ll find loads of other content, which is constantly being updated. Smart Hub also offers the same Your Video and Search features found on Samsung’s Blu-ray players, which make it easy to find content and to find new movies to watch.

The BD-DT7800 is not the only Freeview HD PVR that can stream content across a network or from the web – earlier this year Humax made its TV Portal available on the HDR-FOXT2, which offers a selection of Flickr, BBC iPlayer, Sky Player, Wiki@TV and internet radio, but we think Samsung’s offering is more impressive.

One surprising thing to find on the feature list is 2D-to-3D conversion – another crossover with Samsung’s Blu-ray decks – which means you can turn any Freeview programme into 3D. With so little 3D content available to anyone without Sky’s service, this could prove to be a useful feature – although don’t expect the same quality you’d get from a proper 3D Blu-ray disc.

And on the Freeview front, this is as comprehensive a feature set as you can expect to find, besides one notable exception – its inability to record two channels simultaneously. That’s because only one of the tuners is linked to the hard disk drive, but the second tuner at least lets you watch one channel while recording another. Samsung hopes to rectify this on future models but for now it remains a frustrating limitation.

Still, the BD-DT7800 boasts an eight-day EPG with full series link capabilities, Time Shift and a range of editing functions that let you split or delete part of a recording, which is useful if you wanted to edit recordings before making a back-up copy on an external recorder, but with no RGB Scart output that’s not something you’re likely to do.

The BD-DT7800 uses the same operating system as Samsung’s Blu-ray players, which means colourful, sharply-resolved animated graphics across the board and a sense of logicality that not all Freeview PVRs are blessed with. The main menu breaks functions down into the core areas – Recorded TV, Watch TV, Internet, My Devices and so forth – and despite the elaborate presentation it operates smoothly. 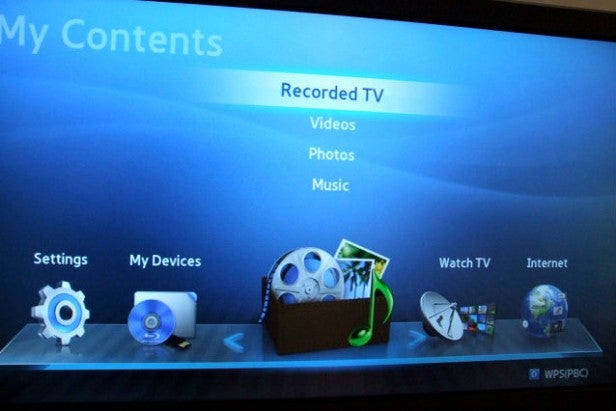 Smart Hub is equally easy to use, Samsung having looked to Android and Apple’s iPhone as design inspirations. The apps are arranged in a grid, each with its own logo thumbnail, and cleverly you can move them into folders, one for each member of the family perhaps. Your Video, Search and Samsung Apps are prominently located at the top, and installing new apps is a piece of cake. It’s responsive and easy to use, although like most web-on-TV features entering text can be a time-consuming process and there’s no provision for adding a USB keyboard.

Elsewhere Samsung’s EPG is one of the best in the business, arranging a wide array of information – not to mention a live TV screen in the corner – without making it feel cramped. The six-channel grid actually shows you most of each programme name, while you can see the synopsis without having to press the Info button. The rest of the digital TV displays and onscreen dialogue boxes are equally clear, particularly the info banner which lets you browse the entire schedule. 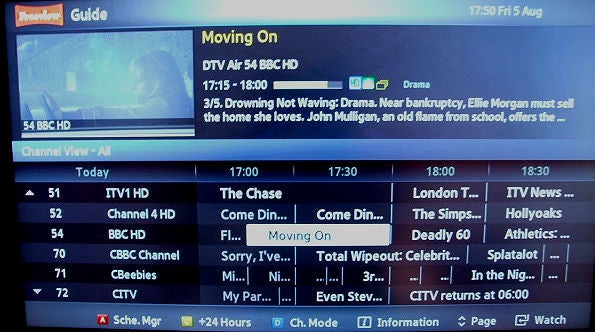 Once you’re connected to the web, the DLNA feature can be accessed through the My Contents or My Devices options in the main menu. Connected devices are listed on the left and content lists on the right, with helpful folder icons to give it some continuity with a PC. This feature also worked smoothly during our test, although there were one or two long pauses while loading content. 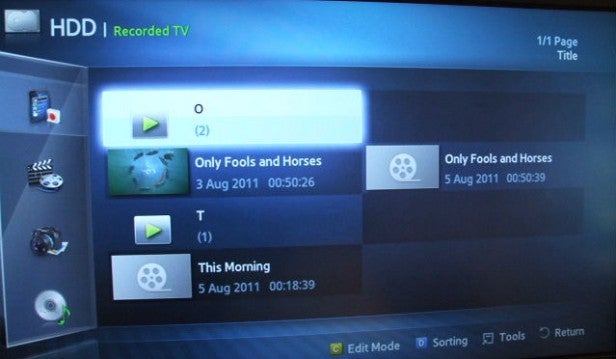 A similar-looking menu is used to display your recordings, which makes them easy to find. The editing features are long-winded to access though (you have to tick the programmes you want to edit, hit Tools, Edit and then get to work) but once found the editing tool is self-explanatory.

The remote is terrific, masking the deceptively complex nature of the product with logical placement of the big rubber buttons. Features like Smart Hub and 2D-to-3D conversion are granted their own keys and a Tools button brings up a small menu box containing picture presets and playback information.

Apart from its aforementioned inability to record two channels at once, we really can’t fault the BD-DT7800’s performance. High-definition programmes look beautifully detailed and rich in colour – during Channel 4 HD’s Come Dine With Me, for instance, the culinary textures are crisply resolved, making the food look more appetising than ever (or disgusting, depending on who’s cooking). BBC HD’s Doctors, meanwhile, looks slick and glossy, with natural-looking skin tones, clearly discernable dark scenes and pin-sharp detail.

The BD-DT7800 also licks standard definition pictures into shape on a 1080p TV, upscaling the images without introducing any unwanted artefacts like stepping or mosquito noise. Colours are richly saturated while moving text on channels like BBC News 24 is never hard to read.

There’s no discernable dip in quality when watching recordings either ─ no block noise or pixel shimmering, even when recording fast moving sports programmes. Unlike most disc-based recorders there are no low-fi recording modes on-board, so everything is recorded in the same high quality. 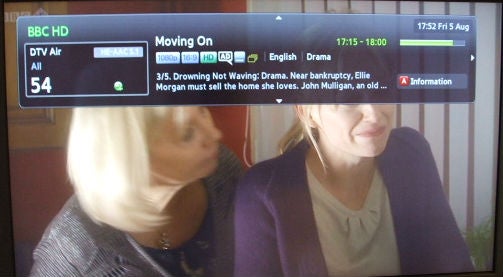 We tried watching Torchwood in HD on BBC iPlayer over our 802.11n Wi-Fi network and encountered no trouble whatsoever – the video played smoothly without any annoying pauses – and the picture quality is highly impressive to boot, a far cry from the blurred, noise-laden pictures normally associated with web video. And with the optical output hooked up to our Onkyo receiver, the quality of MP3 and WMA playback is excellent.

Verdict
The allure of the BD-DT7800 lies not so much in its bread-and-butter Freeview recording functionality (which is good, but no better than its rivals) but in the extras. The combination of Smart Hub, slick DLNA functionality, 2D-to-3D conversion and comprehensive digital media support via network and USB is rare among Freeview PVRs and gives this multi-talented machine an advantage over most of the competition (except the identically-priced Humax HDR-FOX T2).

Where it lets itself down is its inability to record two channels at once and the lack of a Scart output, should you want to make copies of your recordings – both of which the Humax offers. But, those things aside, the BD-DT7800 is a magnificent, multimedia-savvy machine that pushes back the boundaries of what Freeview PVRs can do.