What is the Samsung SmartCam PT?

Adding motorised pan and tilt to a security camera generally jacks up the price, but the Samsung SmartCam PT has both and costs no more than its competition. Like its rivals, the camera is capable of monitoring your home and sending automatic alerts when it detects movement or audio, and all without a subscription.

Thanks to the inclusion of IR LEDs, there’s proper night-vision, too, letting you monitor your home at any time. With no weatherproofing, it’s an indoor-only model, designed for monitoring inside rather than outside. It’s an enticing combination on paper, but the app and a few design choices make it far from perfect.

I wouldn’t call any security camera attractive, but the SmartCam PT is at least neat and unobtrusive thanks to its two-tone conical body. It’s made of plastic, but it’s soft to the touch and the camera feels well built. With a diameter of 85mm and a height of 84mm, you won’t have a problem finding a place for the camera. It will tuck away on a shelf easily.

Alternatively, it ships with a wall-mount bracket. Just be careful that you don’t throw away the thumbscrew in the packaging, or you’ll have nothing to secure the camera with. If you do wall-mount, you’ll be pleased with the 2.3m micro-USB cable in the box, as it gives you enough length to reach the supplied power adaptor. 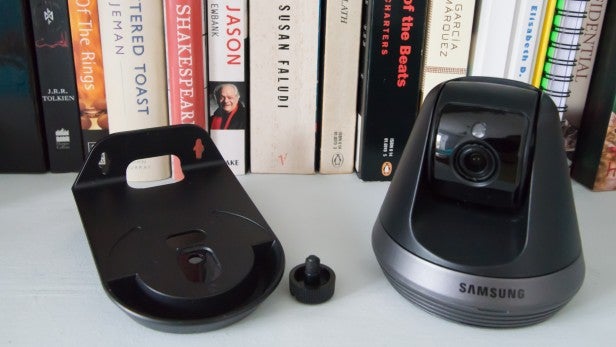 Its height and size mean that this camera is better facing into a room, rather than looking outside. Place it on an average window ledge and the camera’s simply not tall enough to peek over the bottom window frame unless you stand it on something.

Around the back are a micro-USB power connector and a microSDXC card slot, which supports cards of up to 128GB and is used to store video. Flip the SmartCam PT upside down and you’ll find the reset and Wi-Fi Direct buttons.

You have to set up the camera with the Samsung SmartCam app, which is available for Android and iOS. Initial setup is pretty easy once you’ve put the camera into Wi-Fi Direct mode and connected your phone to its network. From the app, you can then add the SmartCam PT to your home Wi-Fi network. Sadly, there’s no support for 5GHz networks, so you’ll have to use your 2.4GHz network. 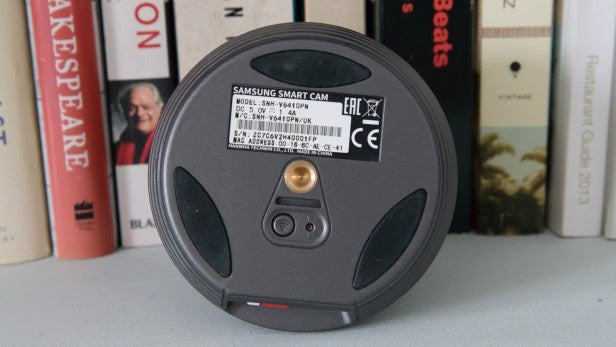 Once you’ve registered the camera with a SmartCam user account (for free), you can also view footage and recorded video through the Samsung SmartCam website. It makes you install a plugin first, but it didn’t have one for Chrome on my Mac, so I had to switch to Safari.

Using the app to watch footage and manage the camera is much easier than via the website. It’s just a shame the app is so unreliable. Every time I selected an option I’d get a ‘connecting’ message for a few seconds, making it a frustrating and slow experience. And it would regularly just lose the connection and disconnect.

It gets worse. Shortly after I started testing the camera, an update was released that stopped me remotely viewing the camera using 4G – the recent reviews on the Apple App Store show that it’s not just me. And it’s no better for Android, with recent reviews all slating the app’s inability to stay connected the camera. The problem seems to be network dependent. The app simply refused to work on EE’s 4G, but it did load up on Three.

There are a microphone and speaker built into the SmartCamera PT, so you can play pre-recorded messages from the app or have a live conversation. It might be nice to reassure your pets, or to tell a burglar that the police are on the way.

By default, the camera can monitor for any movement, but you’re likely to get false positives this way, particularly if you’ve got pets. Instead, you can set up to three motion-sensitive areas to monitor. I found the default motion setting a little sensitive, as the camera picked up a tree blowing in the wind through a window and a light being turned on at night as motion. Dialling down the sensitivity reduced the number of alerts I got, but I’d still recommend pointing it away from a window.

Motion sensing areas are drawn with the camera in its Home position, although they’re still active if you use the pan or tilt. This is a little frustrating, as moving the camera means you’re suddenly monitoring different areas of a room. At best you’ll get false alarms, at worst you’ll miss something important. While being able to move the camera remotely is pretty cool, a fixed wide-angle lens would be better for security, as you’d get more of a room in shot and your motion detection areas would be fixed. For example, the 170-degree lens on the Netgear Arlo Q gets way more in frame than the SmartCam PT, which has a 96-degree field of vision.

All motion detection footage is recorded to the SD card and an alert is sent to the app, giving the option to view the recorded footage or jump straight to the live view. You can set the app to send an email via Gmail – the only email service supported – but it doesn’t support two-factor authentication directly and you have to set up an app password if you want to use this feature.

You can enable audio detection, which sets the camera recording when it hears a loud noise. But, it means you’ll most likely get an alert every time someone knocks on the door or a car honks its horn outside.

My big issue is that without any cloud storage, all recorded footage is saved to the microSD card. All a burglar needs to do is steal the camera or memory card and all of your evidence is gone. Samsung has just started trialling cloud storage in the US, and that will translate to the UK if it is successful. But right now, there is no word on when that might happen. 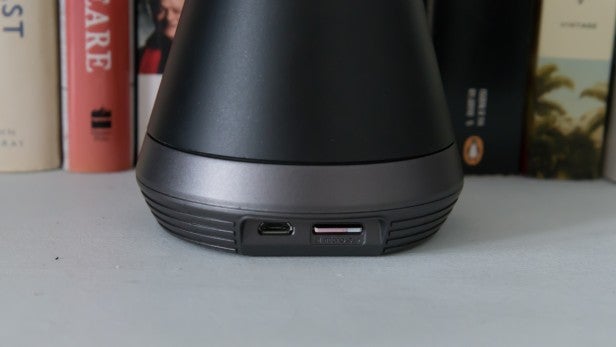 You can record video directly to your phone when you connect to the live view, but you’re going to have to be quick to react to an alert in the middle of a burglary to catch anyone in the act.

As you most likely won’t want to record yourself at home, the SmartCam PT has a privacy mode. This can be activated manually or set via a schedule, but neither is that satisfying. I’d have preferred presence detection or an IFTTT channel to let me enable and disable privacy automatically. 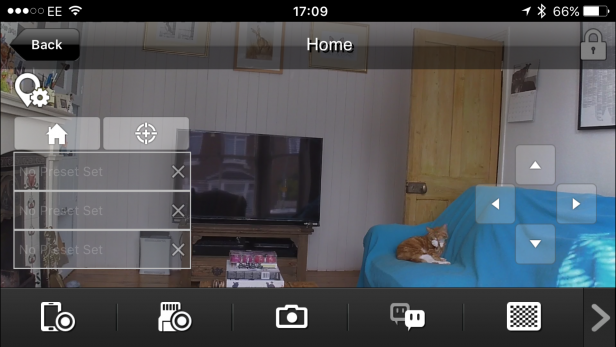 Shooting 1080p video at 30fps, the SmartCam PT should produce decent footage, but video quality is quite mixed. Focussing on compression rather than quality, the camera tended to smooth out detail, and you can see plenty of jaggies on diagonal lines. You can still make out faces, though. If you insist on pointing the camera outside, the quality of the footage is arguably more of an issue, as it’s hard to make out number plates. While video is labelled as a maximum of 30fps, in playback motion looks a little jerky and people walking around look a little like they’ve been animated by a stop-motion artist. You can still spot faces and recognise people, but footage is not quite as smooth as I’d hoped for. 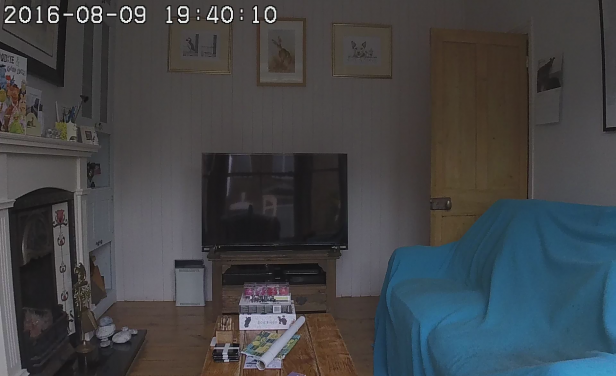 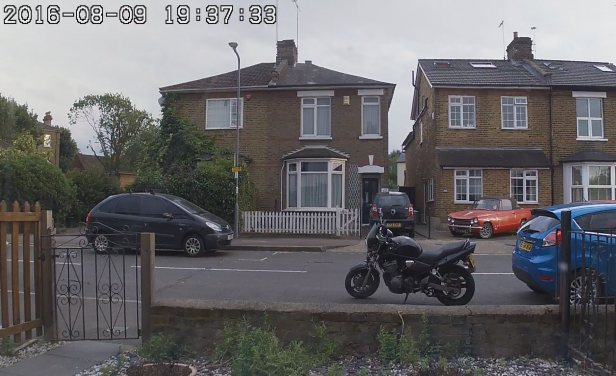 At night, the camera switches to IR mode, turning on its array of IR LEDs. Samsung quotes a 5m range for the LEDs and they managed to light up every room in my house. Again, people’s faces are clear enough for identification, but detail is smoothed out of the picture. 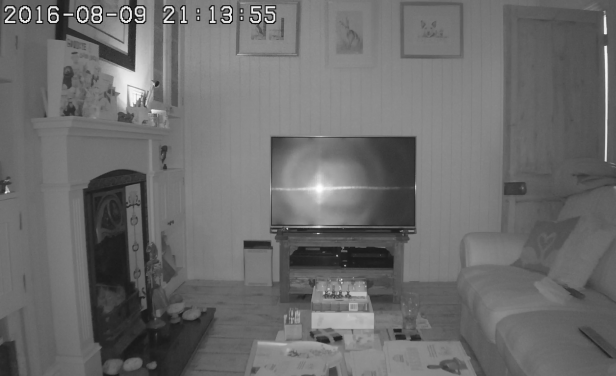 Should I buy the Samsung SmartCam PT?

Considering the quoted image quality, the night-vision and the motorised pan and tilt, the SmartCam PT seems pretty good value on paper. Sadly, it’s let down by some pretty major flaws. First, the clunky app is too unreliable, particularly when the iOS version currently doesn’t work over a mobile connection. Secondly, with no cloud storage, the chances are that your footage will be stolen along with the camera.

Unfortunately for Samsung, the competition is just too strong. The Nest Cam is only a little more expensive, but has a subscription service for cloud video. Spend a little more again and you can get the Netatmo Welcome, which has face-recognition to reduce the number of alerts you get and a recent update also integrates Dropbox cloud storage for free. Or spend a similar amount of money and you can have the Netgear Arlo Q, which has a free cloud storage service.

A flaky mobile app and lack of cloud storage are big drawbacks to what could be a quality security camera.