The latest addition to Samsung’s highly desirable collection of Series 7 branded ultrabooks, the Samsung Series 7 Ultra has been officially unveiled at CES 2013 with the premium laptop boasting a rather Apple-esque design.

Pairing high-end innards with a premium, aesthetically pleasing finish, the Samsung Series 7 Ultrabook sees Windows 8 matched with a highly responsive and visually impressive 13.3-inch Full HD touchscreen display for an immersive and user friendly experience that is as enjoyable as it is visually impressive. 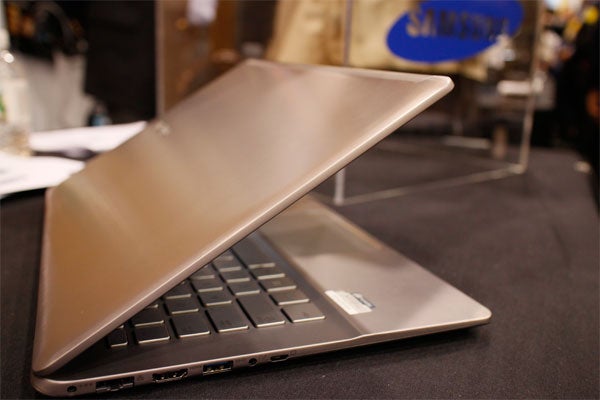 With continued lawsuits surrounding Samsung’s smartphone and tablet offerings, such as the Samsung Galaxy S3 and Samsung Galaxy Note 10.1, for their claimed infringements on Apple’s design patents, the Samsung Series 7 Ultra should watch its toes with the premium ultrabook playing host to a design more than slightly reminiscent of recent Apple MacBook Pro models.

Samsung’s latest CES 2013-unveiled ultrabook so far seems enjoyable to use, with the strong build quality meaning key strokes on the well laid out, spacious and backlit keyboard are not only comfortable, but have good feedback too. 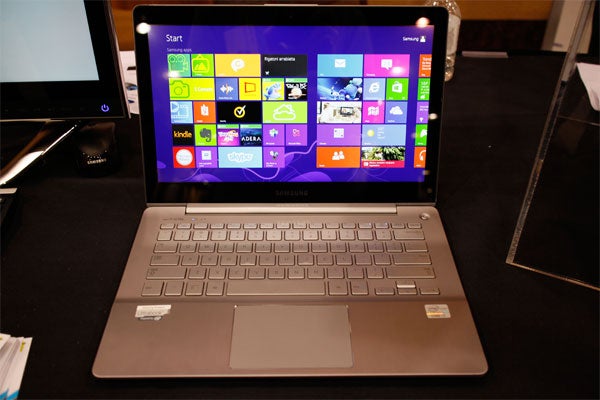 The Samsung Series 7 Ultra has a 13.3-inch Full HD 1920 x 1080 (1080p) screen with up to 10-finger multi-touch capabilities. In use we found it smooth and responsive whether for carrying out the classic pinch to zoom gesture or more complex 10-digit use such as for touchscreen keyboards and apps like a digital piano or art palette.

Where the Samsung Series 7 Ultra screen does suffer some issues, however, is in its hinge, with the device’s opening and closing mechanism proving too loose and offering two much flex when utilising the touch capabilities. Straying from its starting position, the Samsung Series 7 Ultra screen repeatedly wobbled on its hinge during our hands-on with the device, challenged by even the lightest of touches, and failing to hold firm to many touch controls.

Combining with AMD HD8570M DDR3 graphics to offer impressive, vibrant and pin sharp images, the Samsung Series 7 Ultra screen is a strong offering, with swipes between Windows 8 menus, or the opening of programmes and applications avoiding meddlesome motion blur, juddering and bitty transitions. 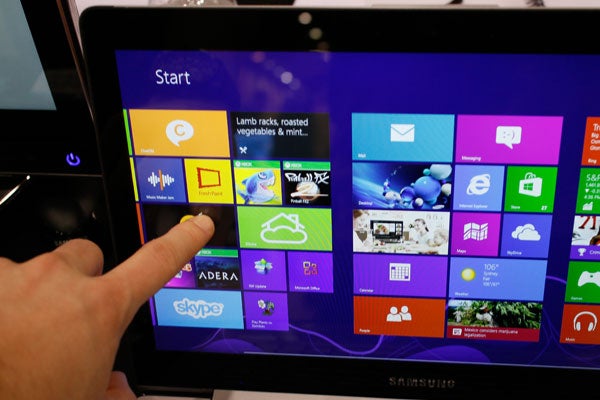 Continuing the theme of sleek elegance with a user-friendly ease of use, the Samsung Series 7 Ultra’s centre mounted touch-sensitive trackpad is also exceptionally smooth with manoeuvrability of the unit’s curser proving both accurate, responsive and friendly to the touch. What’s more, with the integrated trackpad doubling up as a selection tool, the unit’s click mechanism is highly satisfying, offering up a considerable, albeit far from irritating amount of touch and audible feedback.

Said to tout an 8-hour battery life, the Samsung Series 7 Ultra’s staying power is something we could not test in our hands-on time with the device. If true however, this would put the device firmly within the sights of many business and personal users, with a staying power bordering on a full-day’s work, or a transcontinental trip.

Incorporated within the elegant Samsung Series 7 Ultra design, the streamline ultrabook plays host to a broad selection of connectivity options. Well placed and easy to access without being intrusive, the system’s single USB 3.0 port lines up alongside a pair of USB 2.0 connectors, HDMI, mini VGA and HP/MIC options.

Further bolstering the ultrabook’s work and play credentials, the Samsung Series 7 Ultra specs sheet benefits from an integrated 720p HD camera, a Skype friendly offering that is functional and a welcome addition without setting the world alight or revolutionising the industry expectations. 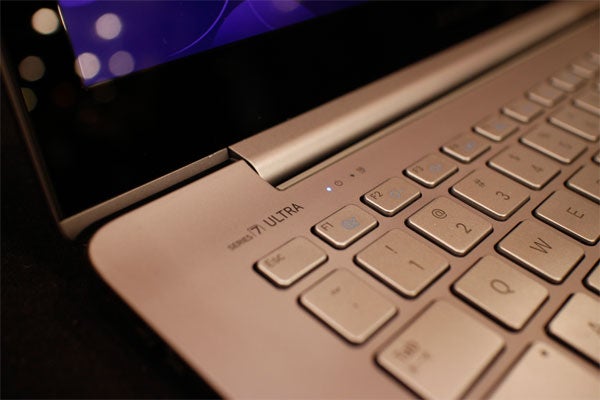 Thanks to the device’s Intel Core i7 processor, an Intel Core i5 model is to launch too, the Samsung Series 7 Ultra is extremely responsive with programme load times and transitions between open software handled with hassle-free aplomb.

Although our hands-on time did not allow us to truly get to grips with the ultrabook’s pair of 2W JBL stereo speakers, from first impressions, the Samsung Series 7 Ultra is what the new Windows 8 OS is all about, with a well implemented touchscreen interface combining well with strong hardware features for an all-round device that is sure to be a hit once launched later in the year.

Are you taken by the newly confirmed Samsung Series 7 Ultra and its impressive specs sheet or do you favour the Apple MacBook that the device’s design appears to emulate? Let us know via the Trusted Reviews Twitter and Facebook feeds or through the comment boxes below.