The installation process kicks in as soon as your TV detects a correctly inserted kit, and is very straightforward and well explained by the detailed onscreen menus. It can take a while to download all the required firmware updates, but there’s nothing that should confuse you.

It’s great, too, to find that the installation process includes setting up the new remote you get with the kit (more on this presently), telling you when to switch your TV’s network connection to the one on the Evolution Kit, and introducing you briefly to the new and ever-improving gesture and voice control systems found on Samsung’s 2013 TVs. 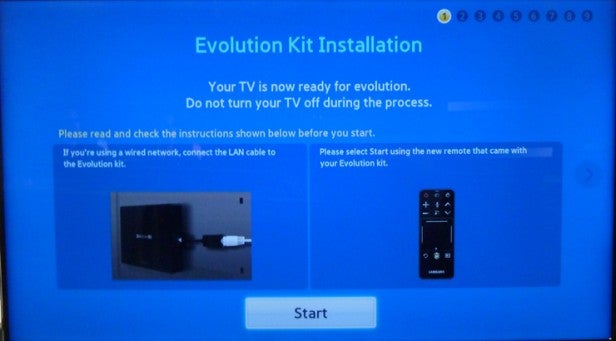 The best thing about the Evolution Kit, though, is that the rewards are startling.

The
thing is, the Evolution Kit doesn’t just update a few bits of firmware.
It actually replaces your old TV’s chips with those of Samsung’s 2013
TVs. Which is especially significant in this 2013 generation since it
means you’re upgrading 2012’s dual core engine to 2013’s quad core one.

In fact, the extent of the Evolution Kit’s impact really can’t be overstated. Your ‘evolved’ 2012 TV feels like a completely new TV in almost every way.

For starters, as soon as the update is complete, the menus of your old 2012 TV are replaced by the ultra-smart new multi-hub menus of Samsung’s 2013 TVs. Even better, you also get the full functionality of these 2013 menus, by which we mean they support Samsung’s new Recommendations system, where the TV learns your viewing habits and makes viewing recommendations based on it.

The inclusion of the new touchpad-based remote with the Evolution Kit ensures you can use the new pop-up shortcut menu built into Samsung’s latest Smart menu system, as well as providing you with one or two handy hardware-based extra tools, such as the little ‘swipe bars’ around the touchpad.

You also get the latest versions of Samsung’s voice and gesture controls, which are far more advanced than 2012’s, as well as access to all of Samsung’s latest online services – including its hugely comprehensive collection of video streaming platforms.

You’re even given access to a free chunk of ‘cloud’ space where you can back up all your recommendation viewing data should you decide to update to a different Evolution Kit. It’s a pity you seem to have to manually instigate this back up before upgrading your Evolution Kits, rather than backups happening automatically every week or two, but it’s still a thoughtful touch.

The new menus all seemed bulletproof during our tests, delivering effectively the same levels of stability and speed you’d get if you bought a brand new 2013 Samsung TV.

Read our Samsung 2013 Smart TV review for more details on why these software upgrades are worth having.

It’s not just your TV’s Smart features that benefit from the Evolution Kit, either. Shifting to the latest quad-core chipsets also improves your picture quality, especially when it comes to upscaled standard definition and streamed footage.

Noise is better handled, there’s more sharpness, and there’s more sophistication and nuancing in the colour handling. Even HD images look slightly better, especially when it comes to the handling of motion.