What is the Evolution Kit?

Now that most TVs can connect to the Internet, many continue to evolve after you buy them. Usually, though, this evolution only consists of new online services, bug fixes and if you’re lucky, some minor operating system improvements. Samsung’s Evolution Kit, though, takes things to a whole other level, giving you a hardware upgrade that essentially turns your ‘old’ Samsung ES7000 and Samsung ES8000 TVs (the only 2012 sets that support it) into completely new sets for just £250.

At least, that’s the theory. Is it worth the bother? Let’s find out. 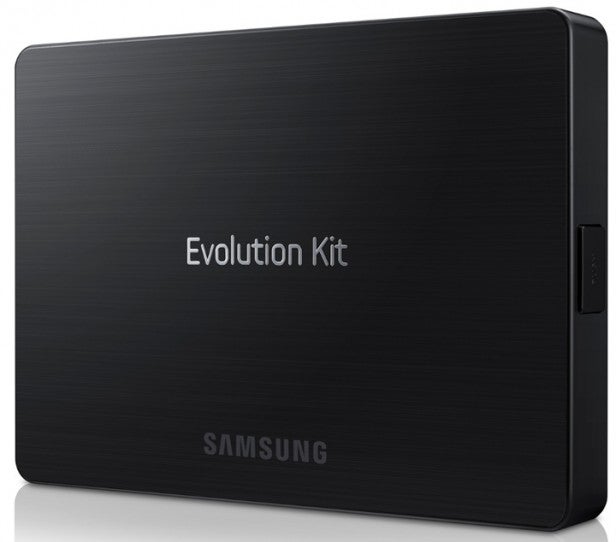 We first heard about Evolution Kits at CES in January 2012. We didn’t pay them as much attention as we probably should have, mainly as we knew it would be well over a year before we actually
got to see one of these kits in the flesh.

Samsung did its best back then to convince us about the potential of evolution kits saying they essentially made your TV futureproof. But while this sounded great on paper, we still didn’t really take it in. Thing was, we’d been burned before by similar ideas that never ultimately came fruition, and was also hard fully comprehend how far kit feature might go in enabling keep up with latest technology.

Now, though, the Evolution Kits are actually here. You can buy one right now. So that’s one doubt about them we can cross off the list. All that’s left is to find out exactly how comprehensive their updates are. So it is that we find ourselves looking slightly nervously at one of last year’s Samsung TVs – the Samsung 46ES8000 to be precise – while wielding a little oblong of metal in our hands. 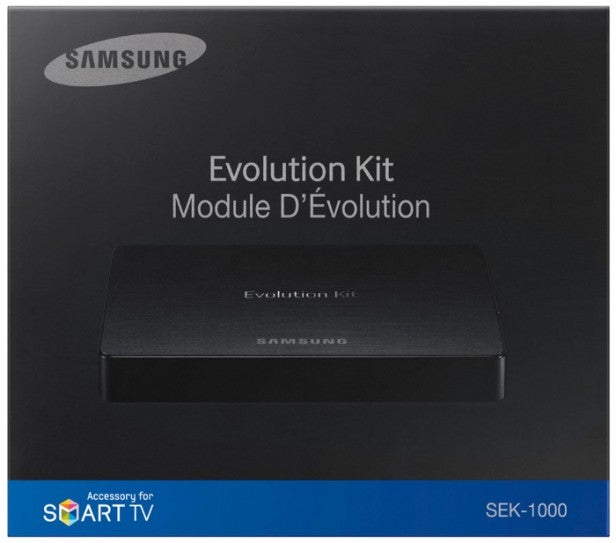 Actually, the oblong of metal isn’t that little. Its dimensions of 127(w) x 91(h) x 16(d)mm go way beyond the sort of hardware upgrade ‘cards’ (like PCMCIAs) we’re used to seeing. Which obviously raises hopes that it’s got a lot more going on under its bonnet than your typical hardware upgrade.

The kit is also remarkably well made. It’s finished in a lovely brushed metal on all the sides that will be exposed when it’s attached, and the Evolution Kit wording is embossed on the bodywork glamorously in a metallic finish. Not bad for a bit of add-on kit you’ll probably never see again once it’s been fixed in to position.

It does makes sense for Samsung to have paid so much attention to the Evolution Kit’s design, though. After all, it still costs £250, and it’s designed to be a physical extension to Samsung’s classy-looking high-end TVs.

At one end of the kit can be found a couple of ‘hinges’ and a slim little slot for inserting a provided LAN adaptor cable, while at the other is a button for releasing the locking latch that holds a fitted kit in place on your TV’s rear.

The kit’s underside, meanwhile, features the main connection to the TV – a connection that’s strikingly large and complicated looking by modern standards, making us think again that maybe the kit really is a pretty high-falutin’ bit of tech. 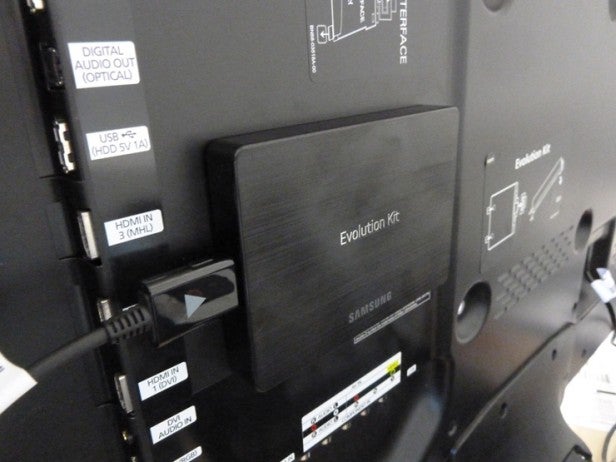 Samsung provides a simple, diagram-based one-sheet guide to installing
the kit, as well as a more fulsome instructions manual. However, despite
these aids we still found installing the kit more tricky than it really
ought to be.

For starters, apparently you really must unplug
your TV from the mains before attaching or removing the kit. Yet, given
how important this is supposed to be, reminders about it should be more
blatant than they are – including, perhaps, a bold warning sticker on
the kit itself.

Our other issues concern the physical design of the connection and ‘hinge’ fixing mechanism. Our first three attempts at installing the kit resulted in it not fully locking into its slot, causing some strange and at times worrying things to happen to our TV. These included some nasty vertical lines that appeared over pictures and terrifyingly stayed there even after we’d taken the Kit off again!

Fortunately, it was a case of fourth time lucky, and the kit finally locked in properly and (to our eternal relief) the vertical lines disappeared.

To be fair
here, while the Evolution Kit we used was new, the TV we were using had
had quite a few Evolution kits stuck into it at Samsung’s labs before we
got hold of it. But even trying a new kit in a relatively unsullied TV,
we still had a couple of false starts before finally figuring out the
right technique for the job.

A key problem is that the big
connection feels a bit ‘squidgy’ and doesn’t always deliver a satisfying
‘click’ of confirmation when the kit is properly locked into place.

Clearly
it’s not ideal that something end users are supposed to install
themselves seems to require a learned ‘knack’ before you’re sure to
install it right. Nor do we feel everyone will feel comfortable with the
amount of pressure you need to apply to the kit to ensure it’s locked
in place, given how thin Samsung’s compatible TVs are.

So to help you avoid our mistakes, the main tips we’d offer are that you
make sure you’re always pushing the rear hinges (which you need to
insert first) back hard against their slots as you rotate the kit down
toward the main slot, and that you make sure you press the whole kit in
with the entire palm of your hand and then gently grip the edges and
pull it away from the TV to see if it feels loose before finally
plugging the TV back in.

Now for the good news: once the kit is locked into your TV, we reckon you’ll be very glad you perservered with it.

Read on to find out why…

Used as the main TV for the review period
Tested for more than a week
Tested using industry calibrated tools, discs and with real world use
Tested with broadcast content (HD/SD), video streams and demo discs
Next
Installation and Performance Review