Samsung’s flagship American-style side-by-side fridge freezer has a host of innovative features and an exceptional premium finish in an attempt to justify its eye-watering £2,500 price tag. The headliner is the innovative Samsung ShowCase design on the refrigerator compartment, which offers a slim outer door to quickly view the contents and access items stored in the door pockets.

The ShowCase door is designed to make it easier to reach frequently used items such as milk and juices, and saves energy as cold air remains better trapped inside the fridge compartment when the door is opened. Grab the handle a little higher and the whole door opens to access to the full compartment. The plumbed-in ice and water dispenser has a water filter and offers crushed or cubed ice.

Being a premium model, this Samsung boasts incredible versatility in interior storage. It also has high-tech multi-flow air circulation cooling with a washable deodorising filter, an LED control panel, and top and side LED lighting inside both compartments. You get a raft of sensors that detect the temperature and humidity of your kitchen environment and best adjust the refrigerator for peak performance and energy efficiency. 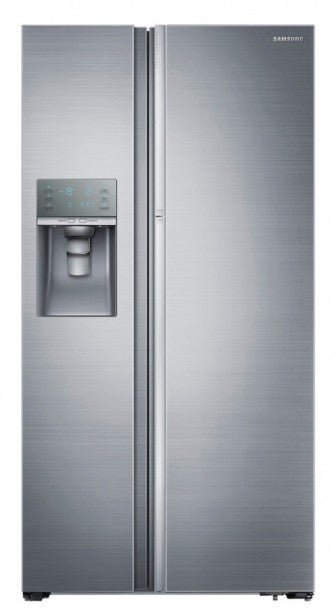 Simply stunning… From the lush stainless steel finish with its very effective anti-fingerprint coating, to the smallest of details like the embossed ‘ShowCase’ logo on the brushed stainless handles, the RH57H90507F is an exercise in how to make a large domestic appliance become an attractive centre-piece of the kitchen.

The ice-blue LED control panel is clear and crisp, and matches the stainless and black panel nicely. The ice and water dispenser area is coolly minimalist. The drip tray under the dispenser is rather shallow in an effort not to create any visually disruptive lines, so you may find yourself wiping this area frequently. All three doors open with a solidly engineered feel and shut with the handles perfectly aligned.

Inside is no less breathtaking, with slim LED lights designed to illuminate every corner. Opening the outer ShowCase door shows off the enormous door packets with integrated clear plastic drawers, while opening the full door reveals yet more drawers and a range of adjustable tilt-and-slide glass shelves.

The headline 570 litres of total chilling space would be of no use unless the interior was practically designed. The freezer gets the thin end of the capacity share with 176 litres, and a fair portion of this is eaten into by the rear of the ice and water dispenser. If you’re happy to forgo the ice making, you can swap out the ice bucket for a small food storage container supplied.

Samsung includes two larger-capacity drawers for meat and fish at the bottom, one with a lid that flips up as you pull it out, four glass shelves and a further smaller drawer in the upper section. In addition there are there handy door pockets for smaller or frequently used items. Opinions on shelves in freezer compartments are divided, as they can hold less than a drawer – before stuff falls out, anyway – although they remain easier to search if not filled to capacity. The freezer compartment is well lit from the top and sides by crisp, white LED lighting. 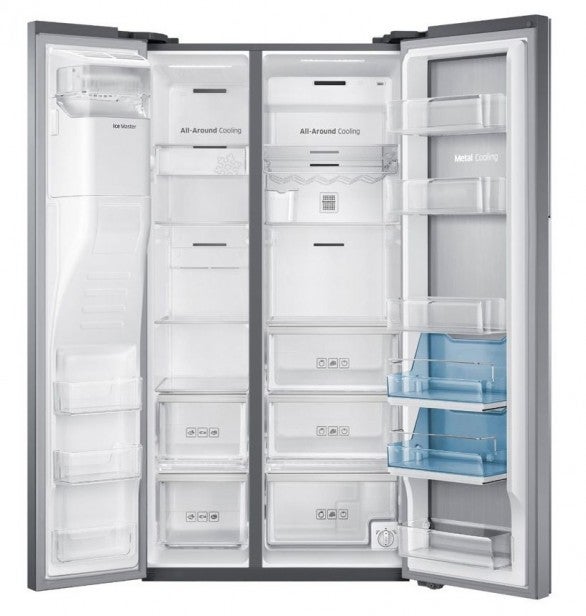 The hero here is the ShowCase refrigerator compartment, which is, by a good margin, the very best appointed refrigerator space we have yet to test. The fridge furniture has been designed to make use of every litre of space and ensure you have instant access to all areas. The six enormous door pockets alone hold as much as a small refrigerator and can be accessed from both sides thanks to the outer Showcase door.

This door is fitted with Samsung’s Metal Cooling feature to keep produce stored in the door pockets cool, even if the door is opened frequently. It opens to reveal all six pockets, two of which slide out as drawers for even easier access. A mid-door shelf has plenty of room above and comes with a divider for easy storage of wine and other tall bottles.

The ShowCase door might not be something you feel is a must-have feature – we certainly didn’t to start with – but it’s something of a ‘grower’. The ease of access to everyday items and great pocket layout are inspired, and it didn’t take long before we loved the ShowCase design.

The main compartment offers three larger drawers – one with slide-and-tilt adjustment, allowing for the largest of bottles to be stored upright. The space is incredibly well thought out and should benefit from the forced air cooling to keep the temperature consistent throughout the entire compartment.

When we find something this well designed, we have to get really picky to find a fault – and we still couldn’t.

Modern, high-tech fridge freezers such as this Samsung are getting quieter and becoming ever trickier to measure. The ambient noise level in the testing lab in the dead of night is around 40dB, from atmospheric and building noises, making Samsung’s claimed 39dB a bold claim indeed.

Sure enough, we could barely hear the RH57H90507F running and could not measure it even with the appliance standing in free space. Chances are, if it is fitted in a kitchen with its back to the wall and sided by other cabinets, it will produce even less noise. We conclude that this very quiet appliance produces 39dB or less, which is about the ambient noise in a very quiet library.

We set the Samsung RH57H90507F at -18 degrees C in the freezer and 4 degrees in the refrigerator compartment, with temperature sensors placed throughout each compartment. In the freezer we put one temperature sensor in the middle of 2 litres of room-temperature water to see how long this premium appliance would take to freeze bulky produce to the core. It also helps to establish how stable the temperature of frozen food would be in the event of a power failure. Analysing the results, this Samsung produced an exceptionally consistent, stable and accurate cooling performance throughout the test.

In the freezer compartment the water sample achieved -18 degrees C at the core in around 17 hours, with a very impressive initial chill-down time to zero degrees of just two hours, thanks to the forced air system. This would make the freezer ideal for those who freeze a lot of fresh produce such as picked fruits or leftovers.

The top shelf, middle drawer and bottom drawer stabilised very quickly at precisely -18 degrees C, with the drawers barely registering /-1 degree either way throughout the two-day test. The core temperature of the ice remained at a ruler-flat -18 degrees throughout. 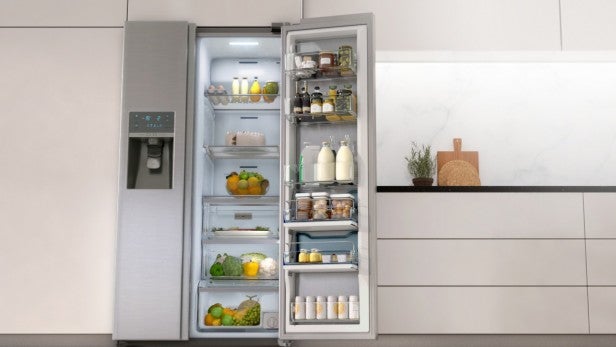 The top shelf predictably showed a little more fluctuation at /-2 degrees and suffered a little in the three-hour fail test. Its air temperature rose to a rather high -4 degrees C, although both lower drawers barely rose by 5 degrees (to -13 degrees) through the same period. Taking a worst-case scenario of food on the top shelf, we’d estimate most food would be safe for around 10 hours of power outage, which ties in with Samsung’s claims.

The Samsung runs a relatively harsh defrost cycle every 11 hours or so, lasting about 20 minutes. This briefly raises the air temperature in the freezer compartment to eliminate frost build-up, and in this Samsung’s case causes the air around the top shelf in particular to rise to almost freezing point. Although more aggressive than many defrost cycles we’ve seen, the short duration has minimal effect on frozen foods, with our ice-water sample raising just 2 degrees to -16 degrees.

Over in the refrigerator compartment, the theme of consistency and accurate temperature continues. Thanks again to the air circulation cooling, the middle shelf, bottom shelf and bottom drawer measured 5 degrees, 4 degrees and 3 degrees respectively, with a fluctuation of barely /-0.5 degrees throughout the entire test. The top shelf averaged precisely 4 degrees, with a typical rise to 6 degrees and dip to 1 degree – above any frost danger – throughout the hour-long compressor cycle. 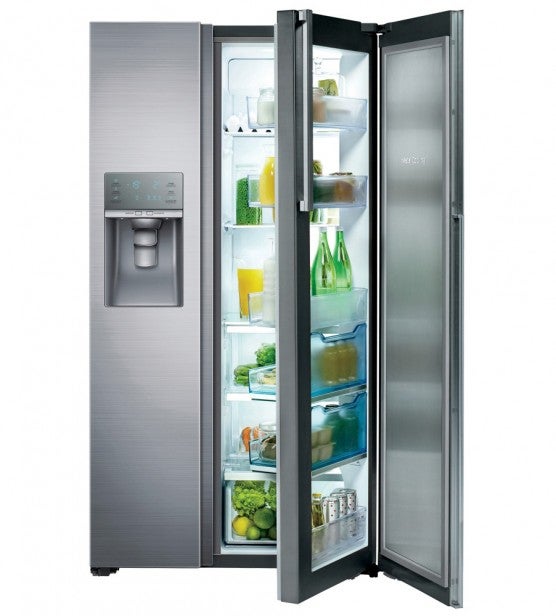 Considering the giant-sized cooling capacity of the RH57H90507F, we were pleasantly surprised that it was even more frugal with electricity than our previous favourite side-by-side model, Samsung’s own RF24.

We calculate that RH57H9050 will use around 406kWh of electricity per year, which equates to approximately 16p per day. That’s slightly less than Samsung’s own quoted figures of 420kWh per year, although those with larger families and a hot kitchen environment will see higher running costs. For the sheer volume of cooling capacity and versatility of the ice and water dispenser, the RH57H90507F is really rather economical to run.

This is a truly exceptional product, combining outstanding design with class-leading technical. We think the ShowCase door will be copied by a lot of other manufacturers next year – it really is that good. The best is rarely cheap and the Samsung RH57H90507F Food ShowCase is the very best side-by-side refrigerator on the market today.