Gamers, meanwhile, will be very happy to hear that with the TV’s Game mode engaged (the toggle for this is unhelpfully tucked away in the TV’s System menu rather than with the other picture presets) we measured input lag at a mere 33ms – one of the best results we’ve come across in this TV generation.

There are one or two issues with the PS64E8000’s pictures beyond the marginal skin tone flaws noted earlier. First, as ever with plasma TVs, pictures don’t look especially bright if you’re watching in a bright room. Second, bright whites and colours don’t look quite as dynamic as they do on your typical LCD TV – though they do actually look quite accurate according to official movie colour standards.

Finally, while black levels are outstanding, they’re not quite as deep as those of Panasonic’s GT50 and VT50 models. Though crucially, as compensation for this, the Samsung’s pictures are a bit brighter – a fact which helps the Samsung produce an actually slightly wider contrast range.

Shifting our focus to the PS64E8000’s active 3D performance, the set continues to impress. First of all, its sheer scale is ideally suited to the 3D experience, filling your field of vision with the 3D image so that you become properly immersed in it. Also, 3D Blu-rays look resolutely full HD, with rich detail levels and none of the rough edges and slight line structure you get with the passive format (especially on screens as big as this one).

The exceptional clarity remains intact with motion into or across the 3D image too, and best of all there’s impressively little crosstalk ghosting noise to (literally!) take the edge off things.

Donning the active shutter glasses does lead to a reduction in brightness and colour range, but neither of these issues is excessive so long as you’re watching in reasonably low-light conditions. Basically, if all 3D TV pictures were as involving and impressive as these, 3D might not have been the flop with consumers that it so far appears to have been. 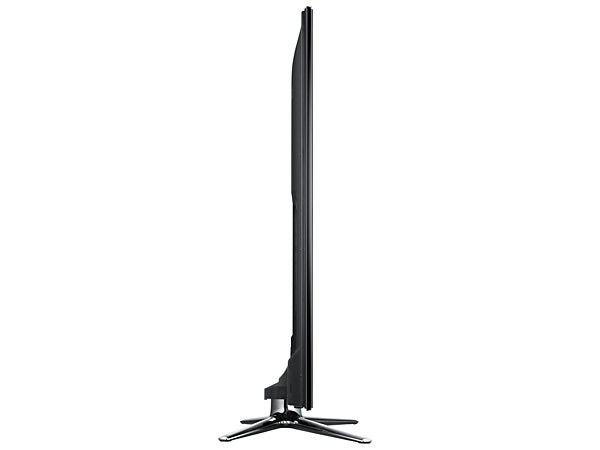 The PS64E8000’s sound isn’t bad. Certainly it’s a step up from Samsung’s ultra-skinny LCD TVs in terms of both the volume and range it achieves, and it doesn’t sound harsh even during pretty full-tilt action sequences. There’s a fair amount of bass to be heard too – though this does sound rather artificial and distorted at times. Still, overall the PS64E8000 can produce a soundstage that’s actually big enough to do the prodigious size of its pictures justice, and that’s fair enough.

The PS64E8000 is another outstanding reminder that if plasma really does only have one or maybe two more generations of existence as a serious TV force, then it will be a great loss to the AV community when it’s gone.

There’s an argument to be made, perhaps, for saving a few bob and going for Samsung’s also great PS60E6500 instead, so long as you can live without the gesture and voice control systems (which you probably can). Then again, when you’ve got pictures this good, getting an extra four inches of them seems like a very good idea indeed.