Samsung’s range of induction hobs is nine models strong with the well-featured NZ64K5747BK hitting a price sweet-spot just over £400. While it doesn’t boast the brand’s innovative virtual flame feature, it does offer sleek looks and some handy cooking features for a 60cm hob.

A single Flex Zone plus two standard circular burners boast 15 levels of control and a Power Boost function for super-speedy heat-ups. While the Flex Zone is just two linked circular burners – so, in fact, not that flexible – this Samsung’s cooking performance and great features make it a superb value buy. 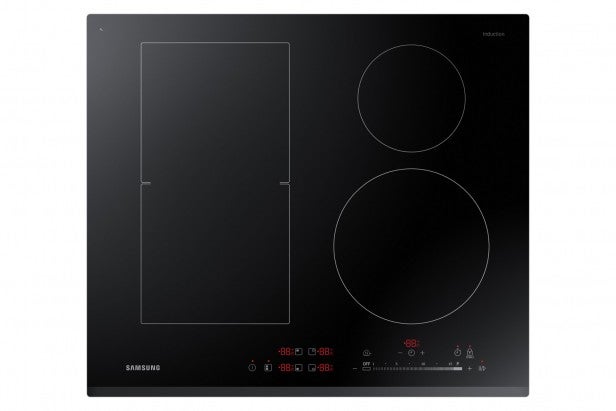 Sporting a frameless glass surface with a bevelled front edge, this mid-range induction hob from Samsung certainly looks the part. While the white outline markings for the single Flex Zone and two circular zones are a little bold for our taste, the same bold markings work well to highlight the extensive controls.

There’s certainly no shortage of control options, either. Each of the four main cooking areas have 15 power levels, providing greater control than the usual 9 levels, and are operated with a slick slider.

As standard, the power comes on at level 15 and you then slide back down to suit. That’s an unusual way of setting up the controls, but we found that it made a lot of sense. Chances are, you’ll be heating from cold and need full power when switching on a zone. 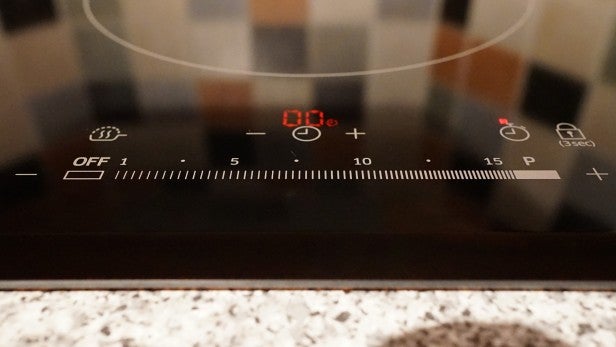 The two cooking areas to the right of the hob are traditional circular zones, with the lower of the two being a very good size indeed. Even with our large frying pan, this zone’s size ensured almost all the pan base was heated. To the left is what looks like a large single rectangular zone… but isn’t.

In fact, the Flex Zone is simply two mid-sized circular induction burners than can be linked together for super-sized pans and skillets. It isn’t a truly flexible zone, such as those found on the premium Siemens EH675MV17E, so we felt rather diddled by this promise. However, taking account of the Samsung’s relatively affordable price compared to the Siemens’, perhaps it isn’t a great surprise. 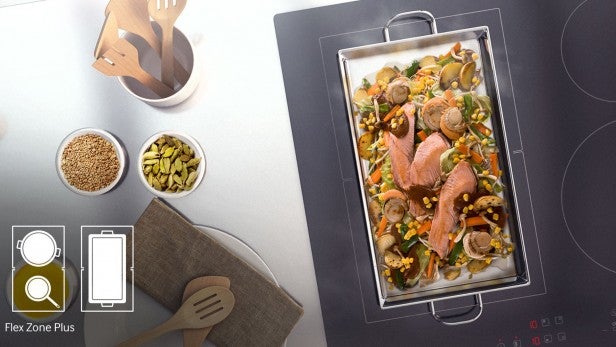 The NZ64K5747BK hits back with some top-notch features. The Power Boost can be used on any one of the four zones – and it packs a real punch. If you boost more than one zone at a time, and have other zones switched on, the Samsung engages some speedy power-management to ensure total electricity draw doesn’t exceed 7.2kW maximum.

For the busy chef, there’s a keep-warm function that can be applied to each zone and a global pause button. Should the phone ring, or a lorry turn up with six washing machines that need unloading (hey, it happens here at testing HQ), the Pause button reduces all zones to minimum power until pressed again.

The feature list is complete with a child lock, a timer with zone shut-off, crisp red indicators and two-stage residual heat detection – lower case “h” for up to 55oC, and capital “H” above. Being a Samsung product, you even get a little electronic jingle when the hob is powered on or off. 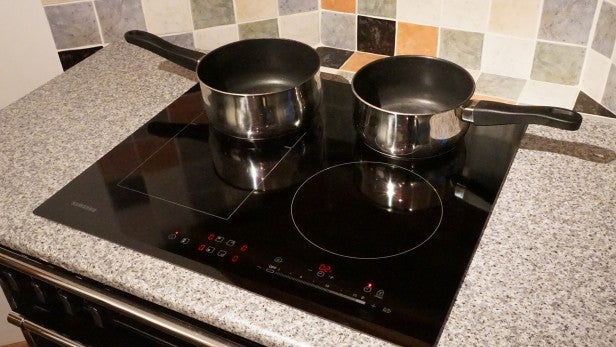 The bright white lettering denoting the touch controls is a little more vivid than ideal for that truly svelte look, but there’s certainly no denying their effectiveness. They’re logical, well laid out and easy to operate. They work faultlessly when your hands are dry and even work fine when they’re damp.

Main operation requires powering up, pressing the zone and then pressing anywhere on the power slider. Each zone will then come on at maximum 15 power. You can back down the slider for gentle cooking or hit the “P” button at the end of the slider for Power Boost of the relevant zone.

A zone can be switched off with the “off” at the base of the slider, or by touching the zone select button and holding your finger there for two seconds. All good. 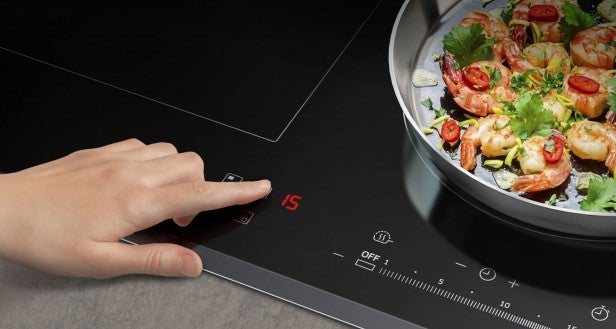 The Flex Zone control simply links the two left-hand burners together for larger skillets or pans, thus providing a single control slider for the whole area. Other than the Power Boost function driving up both burners to a combined 3.3kW in total, that’s it for Flex Zone functionality.

The timer function for each zone can be set to count down from 99 minutes; it concludes by switching off the zone. The timer can also act as a count-up clock, starting at zero and going up to 99 minutes. All actions are accompanied by a subtle beep at each key press as standard, but you do have the option to turn sounds off. 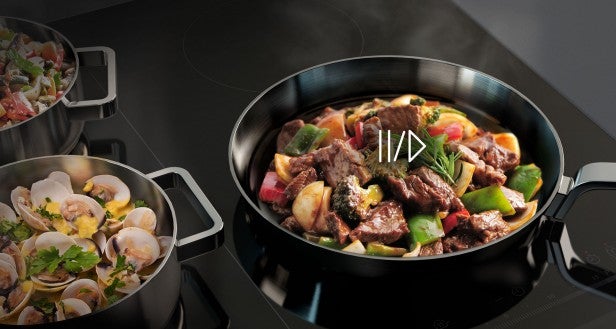 In use we really liked the Keep Warm feature, since it took the guesswork out of determining the level to set the power to achieve the same effect.

The Keep Warm setting pulses power to the zone to keep the pan hot, as opposed to supplying constant heat that would continue cooking the contents. We tried this feature with porridge oats for 15 minutes. While the mix was becoming very stodgy near the end of cooking time, there was certainly no burning or scorching of the oats.

While this Samsung doesn’t use a branded ceramic surface, the glass proved easy to clean and resistant to marks. We used the rougher side of a washing up sponge to remove a milk burn, and the surface was left spotless and unmarked. 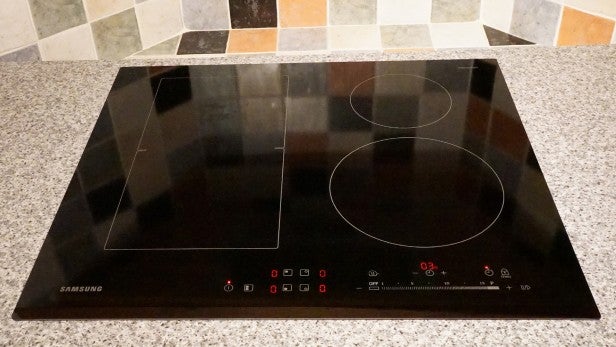 Firing up at full power worked well in use and felt intuitive. It seemed to speed up cooking, if only by a few seconds each time. However, it’s this hob’s stupendously fast heat-up times that will really make a difference.

With the Power Boost feature engaged, this model turned in the fasted boil-test results we’ve yet to see. This is thanks to large, well-designed circular burners and excellent power boosting.

Our 17cm pan with 1-litre of water was raised to 90oC in just 4mins 10secs using the smallest burner drawing 1.8kW. Since this is only a 14.5cm burner, that’s a great result – especially considering the pan was, strictly speaking, too large. 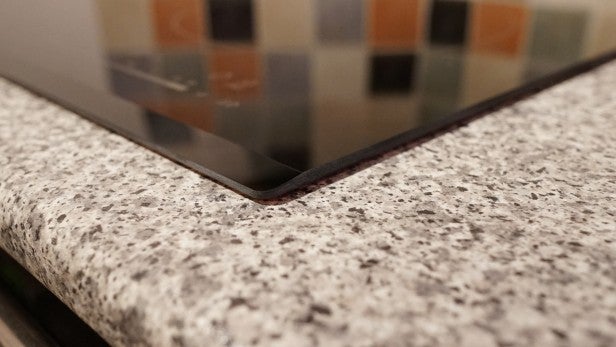 Using either of the mid-sized burners on the Flex Zone side was the best match for our mid-sized 19cm pan. These zones brought 1.5 litres of water to 90oC in a super-swift 4mins 29secs while drawing 2.5kW.

The largest zone had the benefit of being exactly the same size as our 21cm pan. It delivered over 3kW of energy, which raised two litres of water to 90oC in exactly five minutes. This is speedy.

Using thermal imaging, we could see that this Samsung’s circular burners produce very even heating across round pans, with only the smallest cool spot right in the middle. Central cool spots have much less pronounced effect on cooking evenness than side spots, and will be negated completely by using reasonable quality pans. 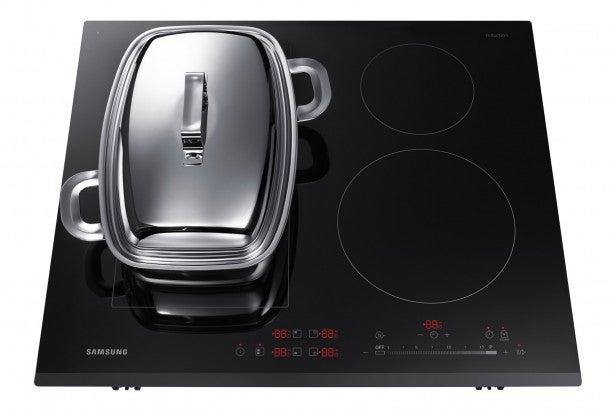 Heat was far less even when we placed a skillet tray across the Flex Zone. The thermal image clearly shows the two individual circular burners heating the pan, with large areas of the tray remaining cool. With a heavy-base pan or skillet these cool spots will be minimised, but Samsung’s Flex Zone simply isn’t as flexible as the marketing may have you believe.

Superb controls, a host of great features, and a serious Power Boost that delivers super-quick heat-up times make this Samsung induction hob a real star performer at the price.

It’s really only this hob’s Flex Zone, which is simply two round burners linked together and so not actually that flexible, that we can criticise in this otherwise great value, good-looking, well-featured hob.