This luxury induction hob from Siemens mixes serious style with exceptional cooking flexibility in a standard 60cm-wide hob. Its flexInduction technology promises the ability to cook with the smallest pans or largest skillets, almost anywhere on the cooking surface.

With powerBoost, comprehensive timer functions and slick slider controls, the EH675MV17E packs in the features.

However, heat-up times aren’t exceptional, the flexInduction zones don’t make for the most even pan-heating, and the printed surface isn’t the easiest to clean. That all makes the asking price of more than £1,000 look rather steep. 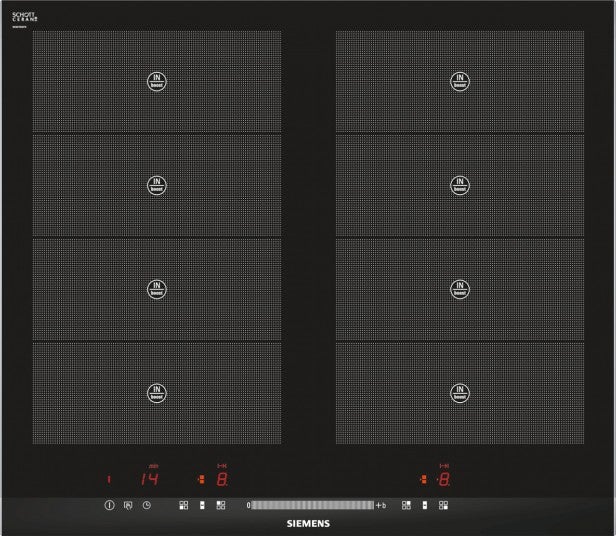 With its bevelled front-edge glass, unusual square heating zones and neat aluminium trim along both sides, this is a truly sumptuous induction hob for luxury kitchens.

The asking price of more than £1,000 is at the top end for a standard-width (60cm) hob, making this model ideally suited to compact, high-end kitchens.

The front-edge controls with their crisp white markings are logical and informative, and the slight texture gives the slider control tactile finger feedback. But the biggest news here is Siemens’ flexInduction technology, highlighted by the two larger rectangular cooking areas that are each divided into four smaller zones.

The cooking area is printed with white dimples that really stand out against the sea of typical 60cm induction hobs with their plain glass and mostly circular zones. In the centre of each of the Siemens’ eight smaller zones is a bold logo proclaiming “IN” – which we’d guess is to let everyone know it’s an induction hob – and “boost”.

The text uses a mix of upper and lower-case lettering, which is likely to drive my OCD nuts. As a matter of taste, the Stevenson household was evenly split on this printed zone styling compared to the more typical, clean-glass look. 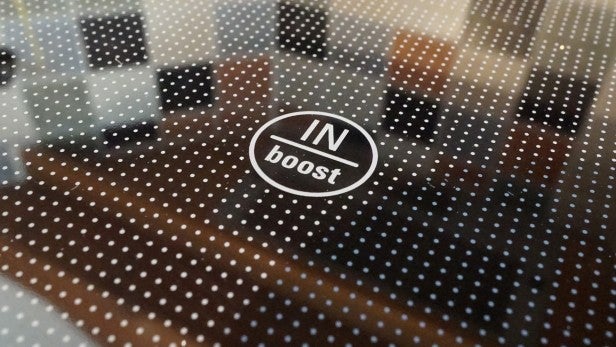 While there are only four zone controls, each one pairs two smaller zones. That means you can efficiently use one large or two much smaller pans in the same quarter of the hob. Moreover, each side can link all four mini-zones together, allowing you to cook on a large skillet or Siemens’ own dedicated Multi-Oval Roaster.

This induction-specific, glass-lidded pan will add another £100 or so to the hob’s not-so-inconsiderable asking price, but it’s designed for roasting, casseroles and steaming on the hob top. So would you even need an oven in your luxury compact kitchen?

As we discovered from the thermal imaging tests, each mini-zone uses an oval-shaped induction burner, so pans don’t need to be centred on the rectangle. This offers even greater cooking flexibility; you can effectively stagger mid-sized pans. Each pair of smaller zones has linked power control from 1-9, plus a count-down timer that acts as a beeper or switches the zone off when the time is up.

While there’s no automatic simmer or keep warm function, we found the lower powers were consistent enough to achieve gentle heating as required. Other nice touches include a child lock, ability to temporarily lock the controls so you can wipe them over while cooking, and the ability to deactivate button-press beeps. 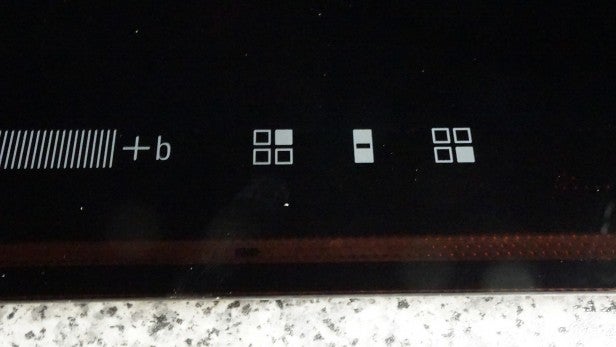 As befitted such a premium-priced hob, the Siemens’ controls are faultless. They are responsive to touches without being so delicate that you nudge the settings accidentally. The slider is super-smooth, irrespective of how fast you move your finger across it (within reason).

The controls didn’t flinch with a damp finger, and even when we sprayed moisture over the control surface they continued to track very well. We do generally prefer a slider control for each zone, but with the limited real estate of a 60cm hob, Siemens’ responsive buttons and slider controls worked faultlessly.

The red display indicators are surprisingly small and subtle compared to the bling look of the hob, but they’re crisp, bright and easy to read. The timer display offers count down from up to 99 minutes, and doubles as an indicator when you’re adjusting the global settings. These are accessed by switching the hob on and immediately holding the timer button for four seconds. 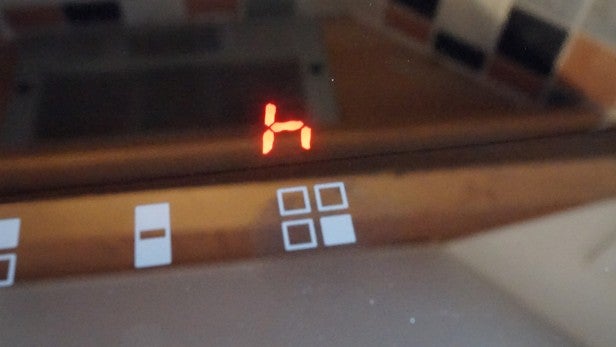 You can enable or disable the child lock from within the settings, limit or disable key beeps, and set the length of the timer alarm.

Interestingly, you can also set up the hob so that the zone deselects itself automatically from making any adjustments after 10 seconds. This forces you to actively make a zone selection before you can adjust power. This should avoid any accidental cooking catastrophes caused by ramping up the power to the wrong pan.

Making the most of the flexInduction technology takes some getting used to. It’s recommended that pans smaller than 13cm are placed on a smaller rectangle and larger ones straddle coupled pairs in the four corners. If the cookware is larger than two smaller rectangles, it should be placed at the top or bottom edge of the larger rectangular flexible zone.

And if you want to make the most of the powerBoost function, you need to place a single pan straddling the two smaller rectangles in the middle of the flexible zone. 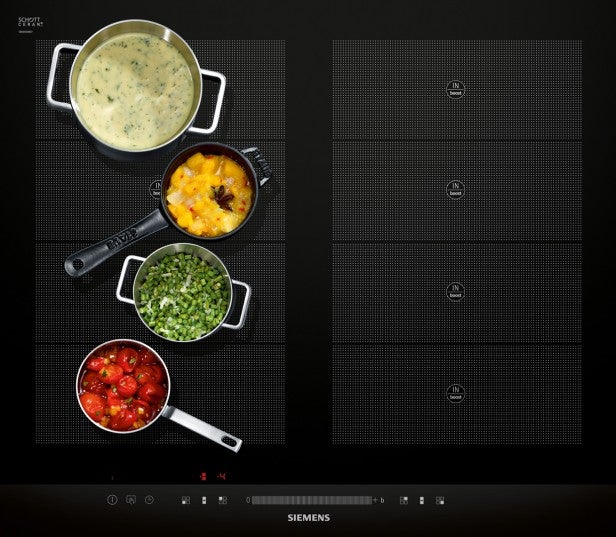 Got all that? No, it took us a while and some practice too. Perhaps the most awkward upshot of the flexInduction zone is the powerBoost feature, as you can’t select it directly. You have to slide the power control up to 9 then press “+b” to engage the boost. Considering you’d most likely want boosted power from cold, this just adds unnecessary faffing.

One minor downside of the overtly highlighted rectangular cooking zones are the zone markings themselves. The slight texture that the dot-printing lends to the surface isn’t quite as easy to clean as smooth glass.

The Ceran glass can take a metal scraper for tough cleaning jobs, but we can’t help wondering what that might do to the printing over time. The Siemens’ manual recommends cleaning with a dedicated glass scraper, while suggesting you should avoid abrasive, steam or detergent cleaners. 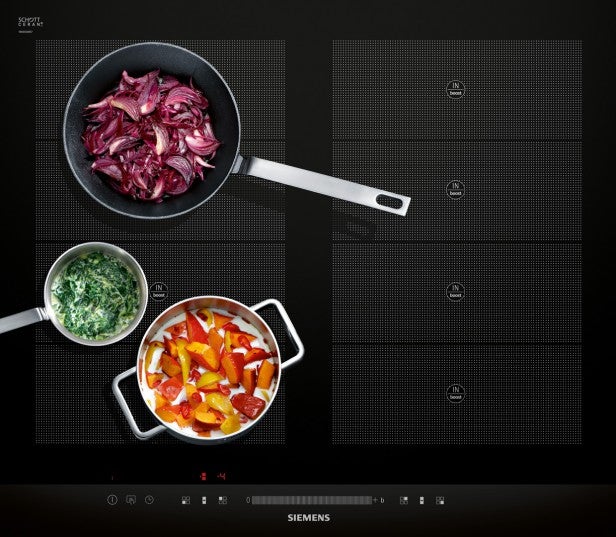 With nine power levels and a boost function on offer across four zones, plus eight mini-zones, this Siemens promises flexibility and speedy performance. Fired into life, it has a suppressed and unobtrusive induction hum, and even when the cooling fans beneath kick in, it remains suitably hushed.

Beneath the sumptuous looking surface, the EH675MV17E is just as unconventional as its rectangular cooking zones. Rather than using four circular induction loops, this model packs in eight smaller, oval-shaped burners.

While they’re controlled from the touch panel in coupled pairs, only one fires up if a very small pan is placed wholly in the smaller zone. Put on a larger pan that straddles two zones and both oval burners will work to heat up the pan.

This is a very neat way of working, allowing the hob to boast four full-sized zones for four large pans, while remaining efficient if you’re only using a very small pan. Conversely, pans are very rarely oval in shape, so it isn’t necessarily the most efficient way of heating your pans. 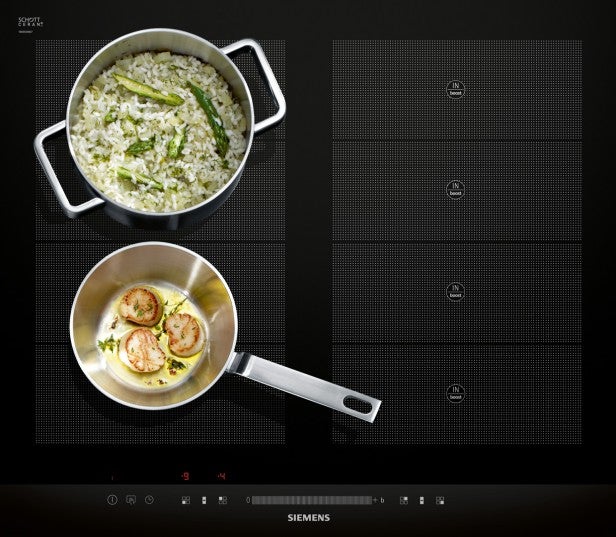 Our 1-litre of water in a 17cm pan – straddling two smaller zones – hit 90oC in a respectable 5mins 8secs, drawing 1.45kW. The larger 21cm pan with two litres of water drew 2.15kW with its time to 90oC extending to a rather more average 6mins 41secs.

Where the oval burners had issues delivering the power was with our 19cm pan. It drew only 1.65kW, so the 1.5 litres of water took a rather lengthy 6mins 33secs to get to 90oC. That’s approaching half a minute slower than the same pan on the budget Indesit VIA6000C, and a full two minutes slower than the Samsung NZ64K5747BK on its boost setting.

Using the Siemens’ powerBoost function should redress the balance, but it isn’t quite as simple as hitting that “b+” button. Despite “boost” being written on each of the four smaller cooking areas per side, the feature is only properly effective when the pan is straddling the two central smaller rectangles at the centre of each larger flexInduction zone.

To be fair, the manual does explain the need for the pan to be in the middle of the zone, but it’s hardly intuitive. 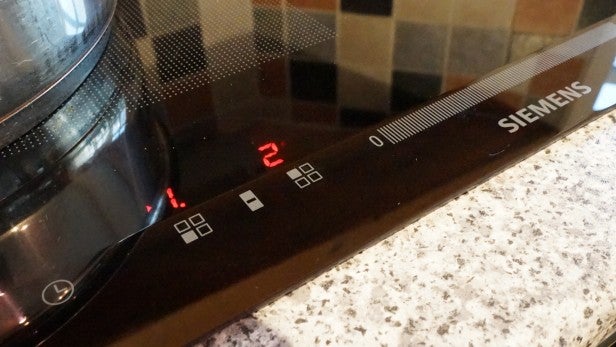 When we placed our test pans in the middle of the flexInduction zone, heat-up times improved by around a minute. That made the results quicker, but no less variable depending on pan size. Results now ranged from outstanding for the small pan to still rather poor for the mid-size one.

Another potential issue with the oval burners and round pans is where the induction heats the pan base. On smaller pans it’s unlikely to be an issue, since the densely packed oval induction coils create a uniform heat across the smaller base area. On larger pans, however, the ovals show noticeably hotter and cooler areas on the pan base.

This can be seen on the thermal photography as our over-size frying pan heats up. Good-quality, heavy-base pans will virtually negate this issue, but it’s another unfortunate side effect of the flexible zones and oval burners.

For luxurious design, super-slick controls and ultra-flexible hob-top cooking, the Siemens EH675MV17E delivers on its premium promise with ease.

However, the flexInduction system takes some getting used to and heat-up speeds are a variable feast depending on pan size and placement – particularly when using the powerBoost feature. Note, too, that the dot-printed zones look great but aren’t quite as easy to clean as plain glass.

A premium induction hob with sumptuous design and clever features – but it isn’t without caveats.