Samsung’s unique Virtual Flame effect receives an orange makeover for this 60cm induction hob. Despite looking like a two-zone hob, it can control the heat to three pans at the same time, with multiple burners allowing you to place up to four pans on the Flex Zone.

A powerful boost feature heats up pans quickly across all zones, the Keep Warm function worked well, and the satin surface cleans up easily. The Flex Zone is super-impressive, with good power and outstanding heating consistency that eliminates hot or cool spots in the pan. The NZ63 is a great hob for creative chefs in smaller kitchens – and won’t break the bank to buy, either. 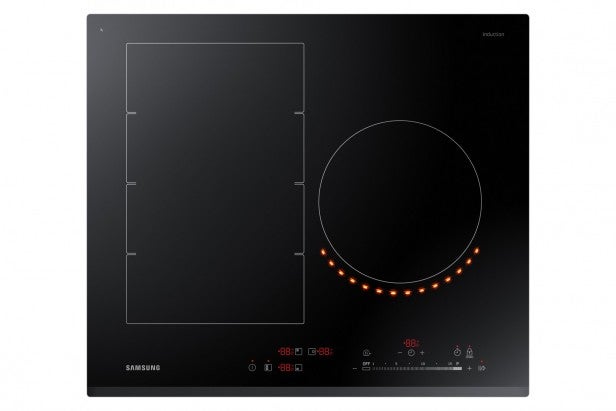 Samsung’s NZ63K7777BK (Okay, let’s call it the NZ63…) is a 60cm wide induction hob designed to bring some of Samsung’s high-spec hob features to less heroic-sized kitchens. The two marked zones – one round and one rectangular – certainly give it a unique look, even if at first glance it appears like you might be limited to cooking with just two pans.

Thankfully, the large Flex Zone Plus to the left offers control for two separate pans, bringing the controlled cooking zone total to three.

Better still, this area isn’t simply a couple of round induction burners that link together for larger pans and skillets. Beneath the surface are four individual induction burners, shaped to create an almost seamless induction heating area across the entire Flex Zone. This configuration promises flexible pan placement, the ability to heat up to four (smaller) pans on the Flex Zone, and very even base heating. 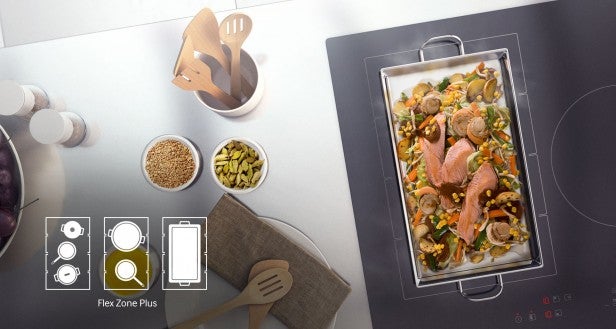 The round induction zone is a large area capable of heating very small to very large pans. It packs plenty of power and comes with Samsung’s wacky Virtual Flame feature. This uses a row of LEDs around the front edge of the zone to shine up a virtual flame effect onto the side of the pan. On this model, the flame effect is orange and has three stages of brightness to indicate approximate heating power level.

We tested Virtual Flame on the Samsung Chef Collection induction hob and decided it was a bit Marmite… you either liked it or you didn’t. Yet the blue colour flame made sense since it mimicked a gas flame. The orange effect here mimics, well, we are not sure. A camp fire? Opinions vary – but there’s always the option to turn it off. 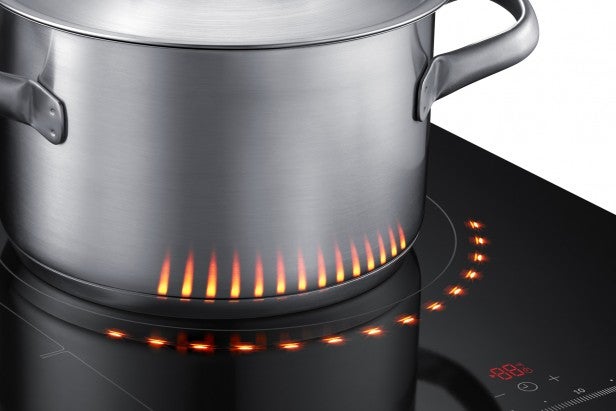 The orange effect varies markedly depending on pan texture and finish so the reality is generally a fair bit removed from Samsung’s marketing images. 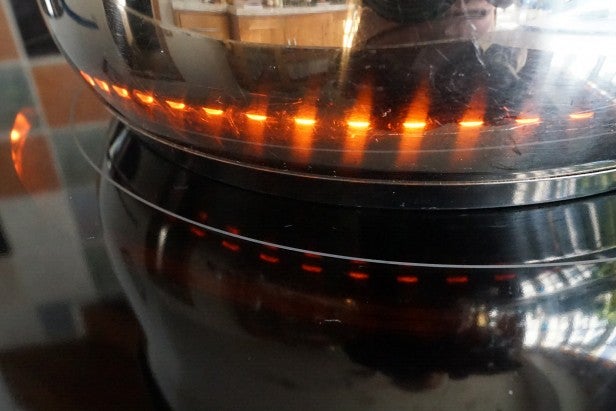 Other features include a high-power boost function on all three controlled zones to speed up initial pan heating, a Keep Warm setting and 15-levels of power control. There’s a child lock to fend off would-be mini-Hestons and the slider control is wide and easy to navigate, even if you have fingers the size of savaloys.

Step back and the NZ63 is quite a looker, too. We like the asymmetric two-zone styling, the legends and lines are relatively subtle, and the glass has a bevelled front surface and very slight satin finish. This resisted showing up finger-marks perhaps a little better than the full-gloss surface and remained easy to clean. Bright red displays, icons and indicator lights are quite ‘bling’, but do tie in with the rosy flame effect. 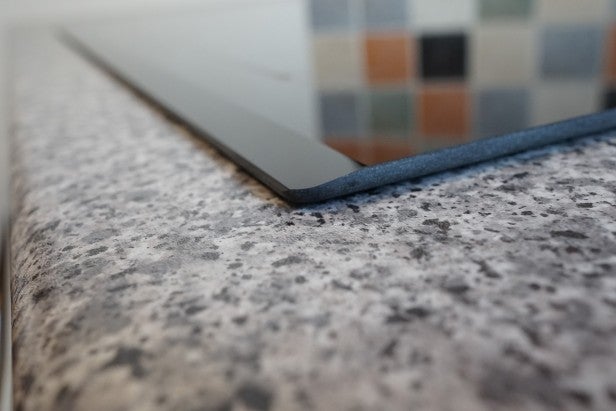 Given Samsung’s expertise with smart devices, it’s probably no surprise that the touch controls on the NZ63 are responsive, immediate and reliable. The power slider is particularly impressive: it rarely loses track of your finger, even during high-speed swipes. 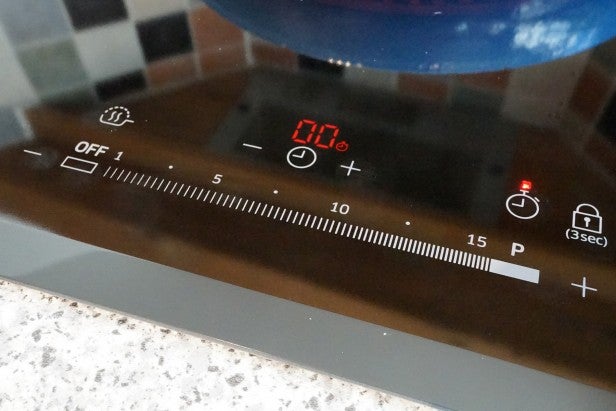 The single slider setup does have the disadvantage of having to select which zone you’re controlling first, though. This adds another key press to proceedings, which takes a little getting used to.

The very same can be said of Samsung’s Quick Start option. When set, each zone automatically comes on at level 15 for fast heat-up. This makes sense, since you’re probably starting with a cold pan. Yet the initial super-fast heat-up can catch you out on dishes where you need a more sedate start – melting butter, for example. You can switch the feature off or turn any zone down immediately, of course. 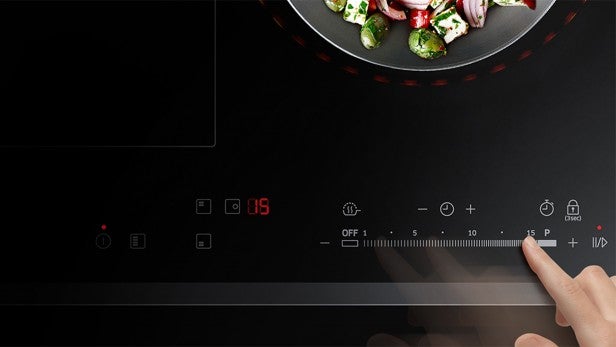 Once familiar with the Quick Start feature, we became huge fans of it. Quick Start made traditional induction hobs, which switch on to the lowest setting initially and the power has to be manually raised, feel a little cumbersome in comparison.

The Flex Zone defaults to two separate zones with individual control, but can be linked with a press of its dedicated button. Due to the wide shape of the induction burners in this zone, it really doesn’t matter where you place the pan, as long as it’s somewhere between the outer marker lines.

That may seem like a small thing, but it isn’t easy to line up round pans on round burners when the zone markers are square. Miss-place a pan by only a couple of centimetres off a round burner and power can drop by 10% or more. Not so with this Samsung; the burners here cover almost the entire rectangular marked Flex Zone area – you really can’t miss!

We both felt the 15 levels of power added a greater degree of control over traditional 10-step designs, too. This was most noticeable when simmering or gently heating up delicate ingredients, since it afforded much more flexibility for fine-tuning the heat. 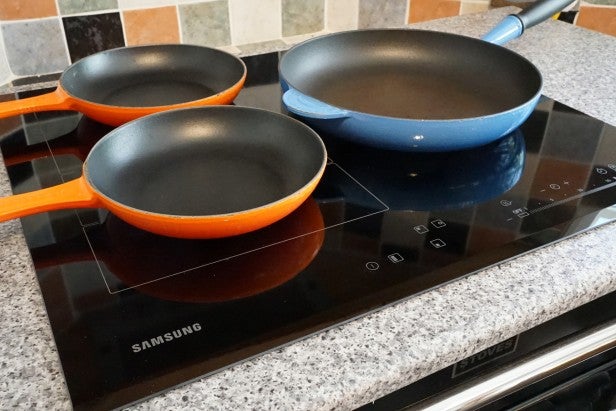 Ironically, that level of control almost made the Keep Warm feature redundant. This pulses fairly low power into the pan to keep things warm but not cooking. The temperature will drift downwards, but far more slowly than if you simply turned the zone off or put the pan to one side. This feature is especially useful for chefs with lousy timing skills (clears throat) since it will keep contents warm while you play catch-up with other pans. It’s the induction technology equivalent of putting a pan on the back-burner.

The timer can count up or down with automatic shut-off for each zone, and runs in one-minute increments up to 99 minutes. You also get a pause function that switches all zones to the lowest power setting – ideal for opening up a bottle of wine before serving up then.

Like all induction hobs, this model has an automatic power-off feature that shuts the hob down if no burners are engaged. Most hobs do this in an annoyingly short 8-10 seconds after power up… which is a challenge to chefs who dither a bit (clears throat again). This Samsung’s auto power off is a much more ponderous-friendly 15 seconds. 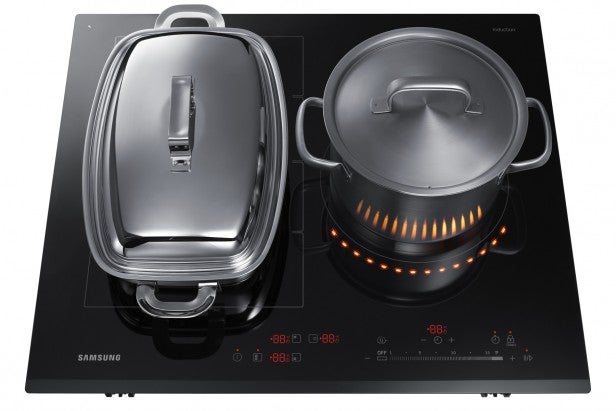 Samsung’s flagship Chef Collection induction hob wasn’t the most powerful model we’ve tested and that showed in its solidly mid-league pan heat-up times. The NZ63 is a different beast. With its Power Boost function engaged, all three zones punched out very good levels of power, resulting in quick heat-up times across all zones and all pan sizes.

We placed our 17cm and 19cm pans on the Flex Zone, hit the Power Boost and timed how long it took 1 litre and 1.5 litres of cold tap water respectively to reach 90oC. The NZ63 delivered just over 1600W to the small pan, heating its contents to 90oC in a respectable 4mins 45secs. The Flex Zone’s large burners delivered much more power to the larger 19cm pan, over 2200W in fact. That meant it took almost exactly the same time to heat half a litre more water.

The large circular zone impressed; it’s a true powerhouse. With a 21cm pan it delivered over 3kW on the Power Boost setting, bringing 2 litres of cold water to 90oC in a speedy 4mins 20secs. Better still, this zone is great for pumping a lot of power into smaller pans too, reducing the ‘boil’ test time of our 1 litre of water in the smaller 17cm pan to a fraction over 3 minutes. Most electric kettles can’t manage that.

While none of our standard boil test results were the absolute fastest we’ve seen, this Samsung is consistently powerful and consistently speedy, no matter the size of pan you use or where you put it. That’s rare for an induction hob costing well under £1000.

The NZ63 was turning out to be a bit of a favourite at the Stevenson Ranch – and the thermal imaging thereafter sealed its status as a proper kitchen hero. Pan heating across the circular and – in particular – the Flex Zone is superb, with very even heat and minimal cool spots.

The Flex Zone’s trick lies in its four oval burners, which did a great job of heating our large skillet pan almost edge to edge. Compared to a typical large induction zone that simply links two round burners together, the Samsung’s heating consistency is in a different league. You could fry the most delicate of items on a skillet here and food in all parts of the pan will cook evenly.

Only Miele’s spectacularly good and far more powerful KM 6629 hob has impressed us to that degree – but that’s a luxury piece of German engineering that’s over three times the price of this Samsung. Okay, we think the NZ63’s orange Virtual Flame effect would have been better in blue. And yes, that’s about all we can say against this very accomplished, great-value induction hob.

Masterful control, powerful heating for every size of pan, and the fabulously versatile Flex Zone make this 60cm Samsung induction hob a real winner. Although we didn’t bond with the orange Virtual Flame effect, it can be turned off. However, the touch controls are seamless and we loved such features as the Instant Heat and its 15 levels of precision control.

For creative chefs keen to use large pans and skillets, the NZ63’s Flex Zone offers the best base coverage and the most uniform heating we’ve yet seen at any price. And all this for less than £700? Editor’s Choice, we say!

Superbly featured, powerful, consistent and a joy to use – the great-value NZ63 is an ideal induction hob for would-be Michelin star chefs on a Beefeater budget.