What is the Samsung NZ84J9770EK Chef Collection?

Part of Samsung’s premium Chef Collection range of kitchen appliances, the NZ84J9770EK is a sumptuous 80cm-wide induction hob with innovative gas-flame effect Virtual Flame technology on two of its four zones. This LED lighting effect indicates cooking power by ‘flame’ height and looks super-cool in use.

Samsung’s magnetic control knob offers a tactile feel and can be removed for hob cleaning, and this model’s Wide Flex Zone allows cooking with large fish kettles or skillets. Yet four zones is limiting for an 80cm hob and it wasn’t the quickest in our boil tests, even with the Power Boost function. This stylish statement in induction cooking might not be the most flexible or powerful 80cm hob, but its price, style and precise control are very appealing. 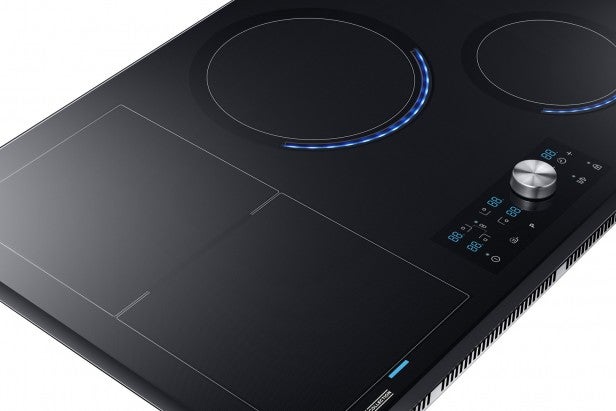 Samsung’s Chef Collection models are the pinnacle of the Korean Giant’s domestic appliance ranges and have never failed to impress us here at TrustedReviews. The snappily titled NZ84J9770EK Chef Collection induction hob doesn’t disappoint. In the style department, its 80cm-wide anthracite grey ceramic glass surface is bevelled on three sides and the legends and zone markers are supremely subtle. There’s no shortage of innovative features, either.

Heading up that list is Samsung’s unique Virtual Flame technology. This feature uses rows of LEDs set below the ceramic surface to shine up a virtual blue gas flame on the front edge of the pan. The colour is a mix of cool whites and slightly darker blues, very accurately imitating a gas flame. They increases or decrease in height and brightness, depending on power level. 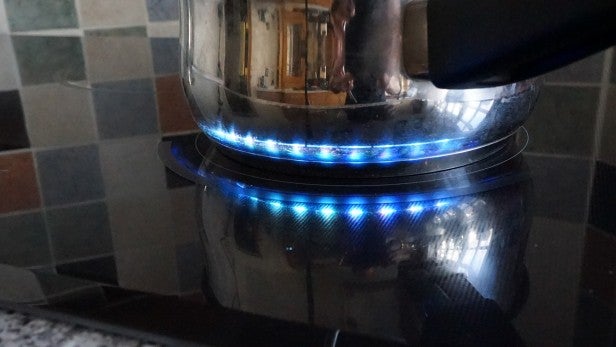 The idea is to “indicate the precise heat level of each cooking zone” and allow users to “clearly and safely see the heat intensity from gentle simmer to full boil” says Samsung. It’s a neat concept, if not exactly essential considering all induction hobs have power-level indicators. Its most tangible benefit is that is looks uber-cool.

Samsung’s magnetic control knob on top of the glass is unique. It offers traditional, tactile rotary power adjustment yet can be lifted clean off of the hob, leaving a completely smooth surface for easy cleaning. If you loose the knob, the circular marked area beneath operates as a standard touch control.

Despite its 80cm width, this hob offers a rather disappointing four zones. Two are traditional circular zones while two larger, square-marked zones sit to the left. This Wide Flex Zone can link both square zones together for single heating control of very large pans such as fish kettles and skillets. 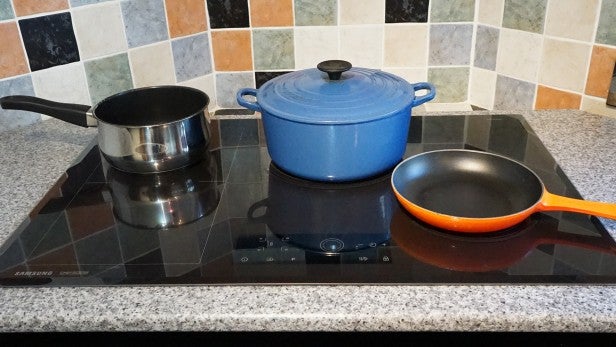 Each of the four zones and linked Wide Flex Zone have 15 levels of power plus a Power Boost high-speed heat setting. As soon as you press the zone button, the power comes on at level 15 for fast heat-up. Press the ‘P’ button and additional power is driven to the zone. Indicator displays are fairly bright blue, which in this case sits well with the Virtual Flame effect.

You get a Pause button that puts all working zones down to level 2, allowing you to answer the phone or re-read a recipe, and a Keep Warm function for each zone pulses low-level power. This hob’s timer can be used as a zone shut-off count-down timer or a count-up timer as an indication of how long you’ve been cooking.

For safety, there are two levels of residual heat indicator for each zone, shown as a lower-case ‘h’ for hot and upper case ‘H’ for HOT! Also included is a child safety lock. 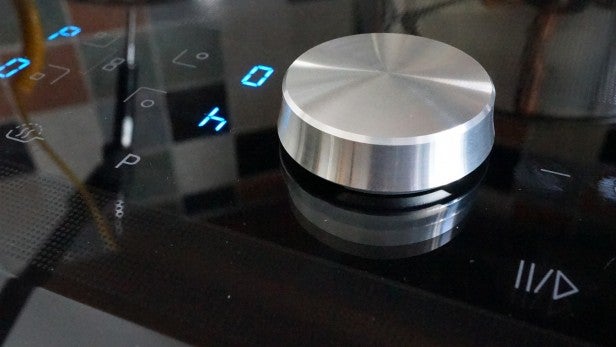 Samsung Chef Collection NZ84J9770EK – What is it like to use?

I was really quite excited by this Samsung’s Virtual Flame technology and experimented with several different colour and texture pans to see which looked best, both directly viewed and reflected in the polished glass surface. Stainless steel pans work the best overall, and the gas-flame illusion is really very clever. I love it. However, Jackie is less swayed by what she refers to as ‘non-essential features’ and was rather nonplussed by the whole Virtual Flame affair.

We did both agree that the removable magnetic knob was a clever idea in principle, yet it was flawed in its execution here. To span the full gamut of power levels from 1 to 15, or visa-versa, you need to rotate the knob the best part of two whole revolutions. Since this is impossible to do in one go without some comedy hob-top break-dance manoeuvre, turning the hob control fully up or fully down requires several partial turns of the knob. 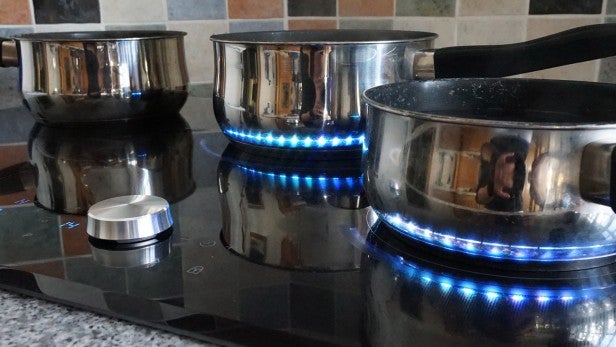 This feels slow and cumbersome, and at best it took me five individual partial turns to go from the lowest setting to the highest. Ironically then, removing the knob and using your finger to prescribe circles on the touch control beneath is much slicker. This is enhanced further by this Samsung’s very responsive touch controls throughout, which responded faultlessly – even with wet hands.

A benefit of having only four zones on an 80cm hob is that there’s plenty of space on the hob top. The two circular zones are staggered, which we found offered plenty of pan-handle space, and the Wide Flex Zone to left caters for a variety of pan sizes. Linking the two parts of this zone together is a simple button press.

The very glossy glass surface did well in our standard clean-up tests using boiled-over milk and cooking oil splashes. The dried-on milk came off with gentle use of a plastic scraper, and both it and the oil wiped clean to a relatively smear-free finish with diluted detergent alone. 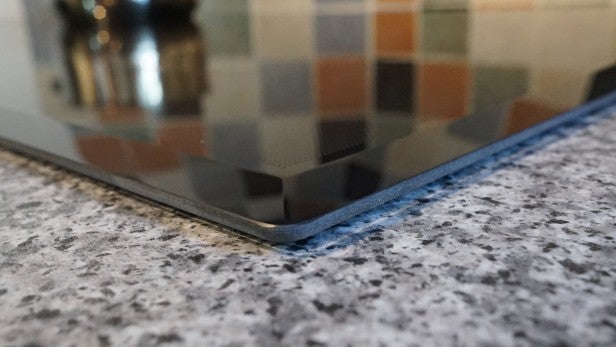 Other than seriously complicating our thermal-imaging test by being too quick to photograph, Samsung’s high-speed level 15 startup is actually very useful. Cold pans do take a while to warm before they start heating the contents, so it seems logical to start at high power. Samsung is the only manufacture we’ve tested whose induction hobs operate in this way, however. 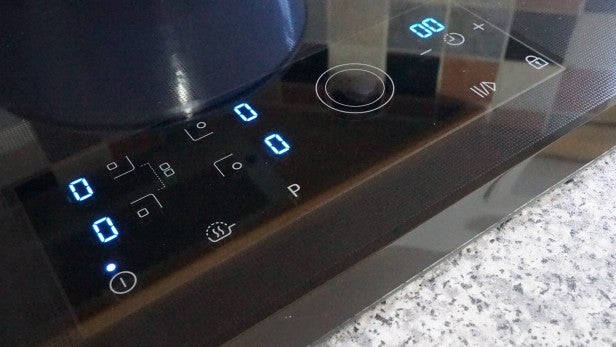 Both the NZ84J9770EK’s small and large zones use circular induction burners, so should ensure even heat distribution in round pans. Yet thermal imaging showed that the burners were somewhat smaller than the marked pan areas and had a largish cool spot in the middle. This meant that our heat-up tests were a little slower than anticipated and fell behind the stellar performance of Samsung’s own NZ64K5747BK that we tested last month.

In Boost mode, the smaller zone heated 1 litre of cold water to 90oC in a 17cm stainless steel pan in a reasonable, if not super-quick, 4mins 35secs. Our largest 21cm pan with 2 litres of water on the larger circular zone was also fairly prompt, if not blisteringly quick, reaching 90oC in 5mins 35secs.

Moving to one half of the Wide Flex Zone with our 19cm pan proved much less effective. The Samsung delivered 1800W on boost to the pan and took a fairly lengthy 6mins 20secs to get the 1.5-litre water sample in the pan up to 90oC.

Linking the two zones together gave plenty of cooking power, with up to 3600W on tap for the largest pans that cover the entire cooking zone. Thermal imaging showed two simple round burners, despite the square-marked zone area. Two circular burners aren’t as efficient as squared-off ones for pans and skillets that bridge the two zones; there tends to be a cooler ‘waist’ in the centre. Heavier skillets with plenty of base metal will smooth out any issues, however.

Samsung’s Keep Warm feature pulses up to 100W to the chosen zone. That’s fairly low power if you’re trying to keep your pan contents super-hot. That means pan temperatures above about 70oC drift south fairly quickly. Conversely, it did ensure our porridge didn’t dry out or burn in the five minutes we tested the feature.

We’re big fans of Samsung’s fairly unique 15 levels of control and – coincidentally, given the Virtual Flame feature – it does give this hob gas-like temperature control. Combined with the responsive touch sensitivity, this makes the Chef Collection NZ84J9770EK very easy to use. 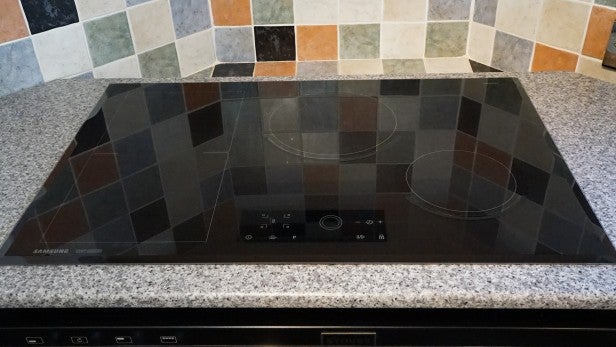 Should I buy the Samsung Chef Collection NZ84J9770EK?

Samsung’s Chef Collection hob is a supremely stylish, feature-rich induction hob with precise and easy to use controls. Yet features such asVirtual Flame and the magnetic knob polarised opinion here and heat-up times for round pans, especially in the Wide Flex Zone, are a bit sluggish for a hob costing over £1000.

Not an unreserved recommendation then, but for a stylish, well-featured four-zone hob with unique features, the NZ84J9770EK has plenty going for it.

Samsung’s stylish Chef Collection hob wows with its Virtual Flame and precision control, yet it isn’t the fastest nor the most flexible of 80cm wide hobs.