I don’t imagine that it’s news to anyone reading this that the digital camera industry is fiercely competitive. Several of the world’s largest electronics companies, names such as Sony, Canon, Panasonic and Nikon, have been vying with each other for years to gain a technological edge that will guarantee them a bigger share of the market, and bigger profits. However there is one other camera manufacturer that dwarfs even those industrial giants. Korean-based Samsung is the world’s largest conglomerate, and when an organisation like that decides it wants a chunk of the digital camera market, all the others can do is shuffle over and make room. 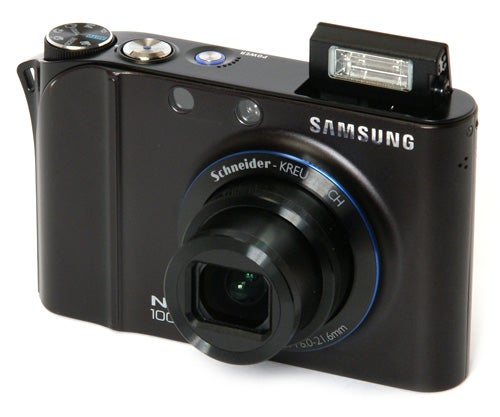 The NV series has been Samsung’s technological proving ground, demonstrating high quality optics, stylish design and innovative control systems, as well as superior performance and generally good results. I’ve been impressed by many of the models in the series, such as the NV3, NV10, NV8, NV30 and the NV9 that I saw a couple of weeks ago, and they’ve sold well too. Today however I’m taking a look at the last of the NV series, the NV100HD. I’d like to report that such a successful series ended on a high note, but sadly this is not the case. 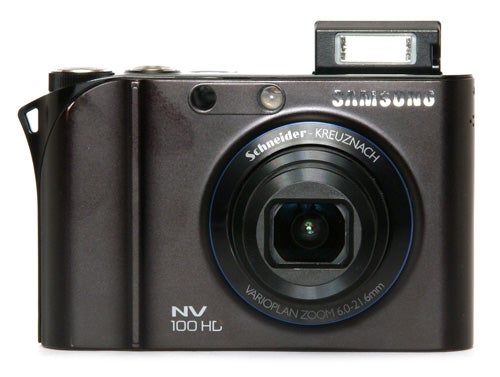 The NV100HD has an immensely ambitious specification, as though the designers knew that it would be the last of the series, and decided to throw in every idea they’d got left. It has a big 14.7-megapixel 1/1.72-inch CCD sensor, a 3.6x zoom Schneider-Kreuznach lens with a maximum aperture of f/2.8 and a 28mm wide angle, a 3.0-inch touch-screen monitor with a resolution of 460k (twice the usual), 1280 x 720 30fps HD video recording and optical image stabilisation. There aren’t many current models from other manufacturers that can match its list of features, and none at all that can match its price of under £170. On paper it should be one of the best value compact cameras on the market.

Physically the NV100HD is one of the best-looking models in a series not exactly know for ugly cameras. The body has the usual round-ended design motif that is a hallmark of the NV range. It is mostly metal, although virtually the whole of the back of the camera is taken up with the big touch-screen monitor. The shape incorporates a raised finger grip, and the camera is comfortable and easy to hold despite its small size. The official figures claim the NV100HD is 19.9mm thick, but this ignores the lens which retracts not quite flush with the body. Even so it’s only 28mm thick, definitely in shirt-pocket territory. The NV100HD is available in silver and red, silver and black, bronze and black or the plain matt black shown here. 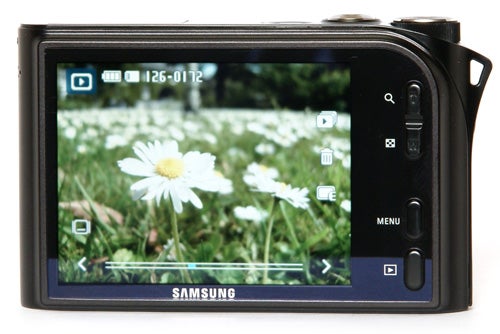 I’m not a big fan of touch-screen control on cameras. In my opinion they offer no advantage over the conventional D-pad and menu and in fact have several major disadvantages. There are some cameras that get it right, but they are few and far between.


The touch-screen on the NV100HD is not one of the better ones. It’s very sensitive, and responds to a light fingertip touch, but as is often the case the button areas are far too small and too close together, and the slight lag between pressing the screen icon and the action it is supposed to trigger makes it clumsy and awkward to use. Admittedly I have notoriously large fingers, but I found that the buttons and their tool-tips were completely obscured. Unfortunately it only responds to a finger touch, not a stylus or any other object, so unless you have fingers the size and shape of pencils you’re going to have a problem operating the NV100HD.


It’s a pity, because the camera has a lot of fun and useful features, including face, smile and blink detection, a range of colour options, plenty of scene mode programs, as well as auto, program and limited manual exposure. This only allows the selection of minimum or maximum aperture, but shutter speeds from 16 seconds to 1/2000th of a second are available. Image adjustments include sharpness, saturation and contrast, as well as a wide range of colour options. There are also several options in playback mode, including red-eye correction and automatic contrast balance. Like most of Samsung’s compact cameras, the NV100HD can recharge from a USB port. 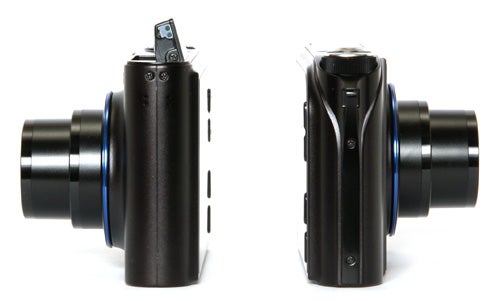 The stand-out feature is of course the 1280 x 720 30fps high-def video recording mode. The NV100HD was one of the first compacts to offer this feature, and it is well implemented and produces good results, with video recorded in the popular H264 MPEG4 format. Unusually the optical zoom can be used while shooting video, although the whirr of the zoom motor is quite loud on the soundtrack. It is possible to record without sound to avoid this.

Like most of the NV cameras the NV100HD performs exceptionally well. It starts up in well under two seconds, and shuts down again even more quickly. In single-shot mode at maximum image size and quality it can sustain a shot-to-shot time of approximately 1.6 seconds, which is very fast. In standard continuous mode it is faster still at 1.3 seconds per shot, but there is a high-speed continuous mode which can take a burst of four shots at around 2 frames a second, before slowing to 1.25fps as the buffer fills up. 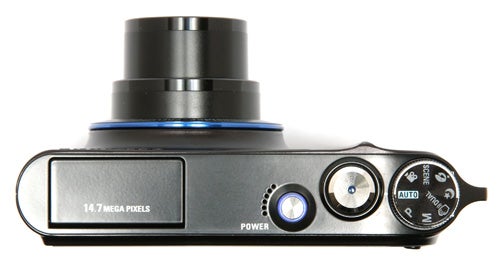 This outstanding performance is aided by an extremely fast autofocus system, in fact one of the fastest I’ve seen on a compact camera. It’s accurate too, and operates almost as quickly at full zoom and in low light. The NV100HD has a good bright AF assist lamp with a range of several metres, and the pop-up flash is very powerful for its size, easily lighting a large room. The flash metering is excellent, lighting close-range subjects without over-powering them.


Unfortunately the biggest disappointment is the image quality. Although the sensor is of the larger 1/1.72-inch size, it is simply over-powered and overcrowded. The resulting images may be huge, but they lack contrast and depth, colours are washed out and there is no tonal subtlety. As well as this the resolving power of the sensor may be beyond the resolving power of the lens, because the actual level of detail is lower than some similar 10-megapixel cameras.


The lens itself isn’t bad, although it does produce some barrel distortion at wide angle. Overall sharpness is good, with very little corner blurring, although there is some chromatic aberration in the far corners of the frame. 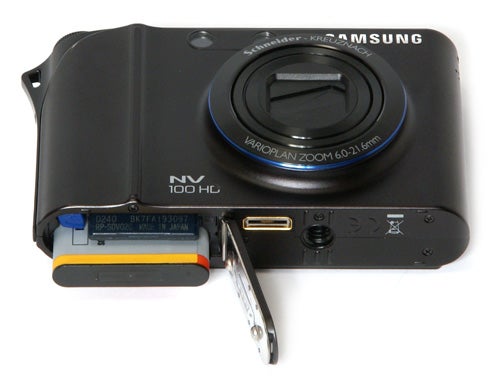 The NV100HD’s main image quality problem is image noise, another effect of that overcrowded sensor. There is visible colour mottling even at 80 ISO and significant noise by 200 ISO, which gets progressively worse. There are major colour problems at 400 ISO, and the three-megapixel 3200 ISO maximum is pretty much unusable.

The Samsung NV100HD could have been a great camera. It has a striking but practical design, solid build quality, a decent lens, a good range of features and excellent performance. The autofocus system works very well in low light, and the HD video mode is a nice bonus. However all these good points are spoiled by that fiddly touch-screen interface and the disappointingly poor picture quality of its over-powered sensor. The low price is tempting, but it could have been so much better.

”Over the next few pages we show a range of test shots. On this page the full size image at the minimum and maximum ISO settings have been reduced to let you see the full image, and a series of full resolution crops have taken from original images at a range of ISO settings to show the overall image quality. The pictures were taken indoors using natural light. ” 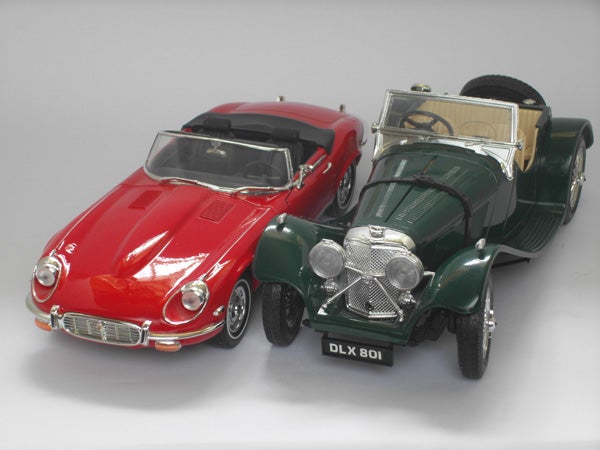 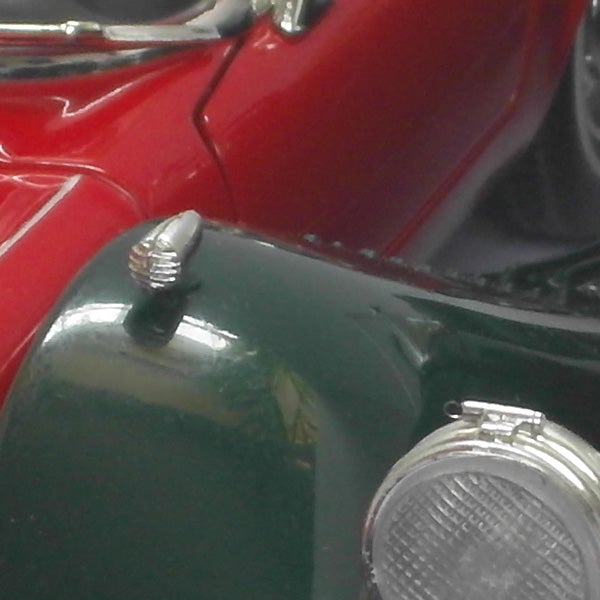 Even at the lowest ISO setting there is visible colour mottling. 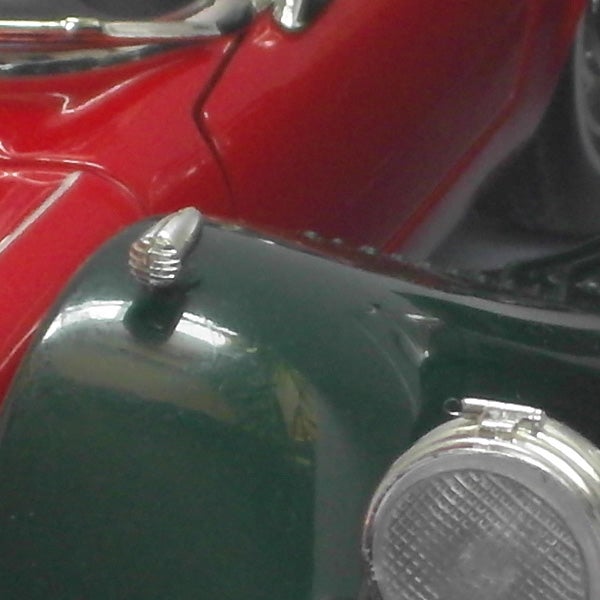 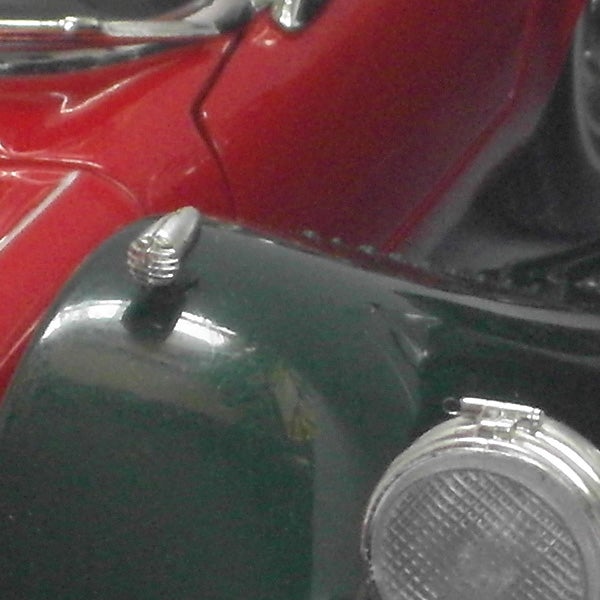 There is visible noise at 200 ISO. 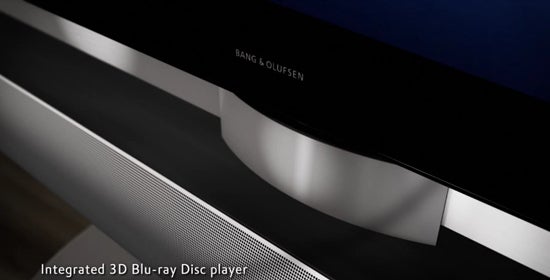 Lots of noise at 400 ISO. Some areas have completely lost colour, while others have spurious colour artifacts. 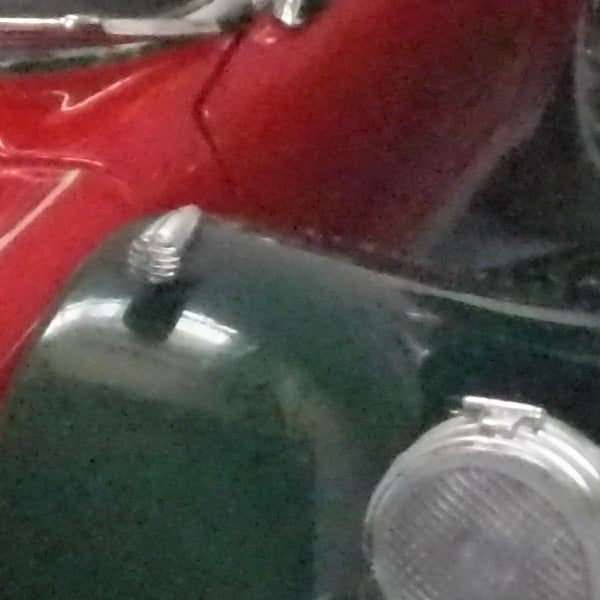 Image quality is very poor at 800 ISO, with little fine detail and lots of colour distortion. Look at the pixel-binning effect between the red and green panels on the left. 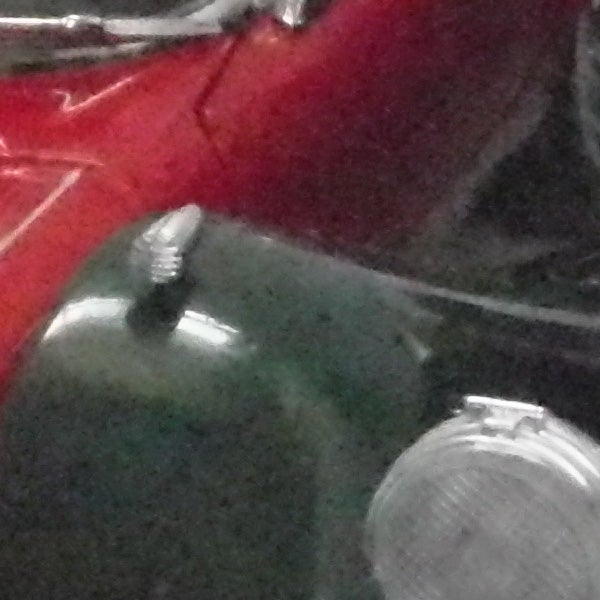 1600 ISO is the highest full-size setting. 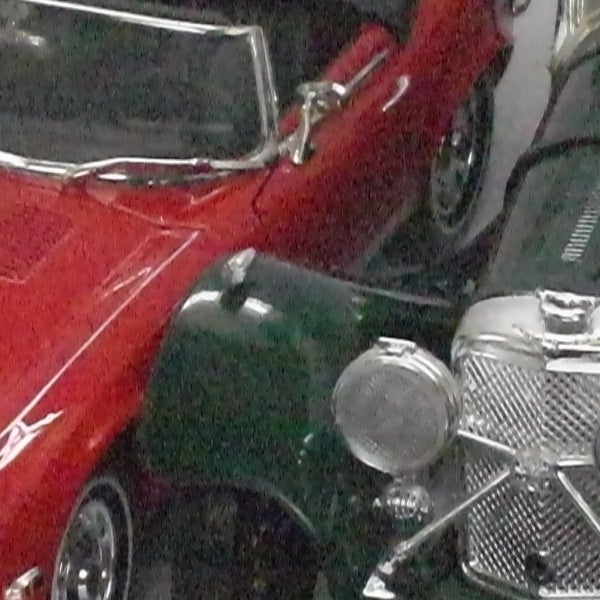 3200 ISO is available at 3MP, but the quality is terrible. 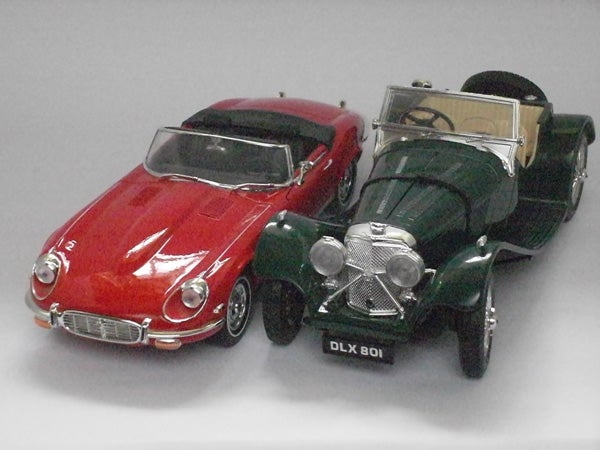 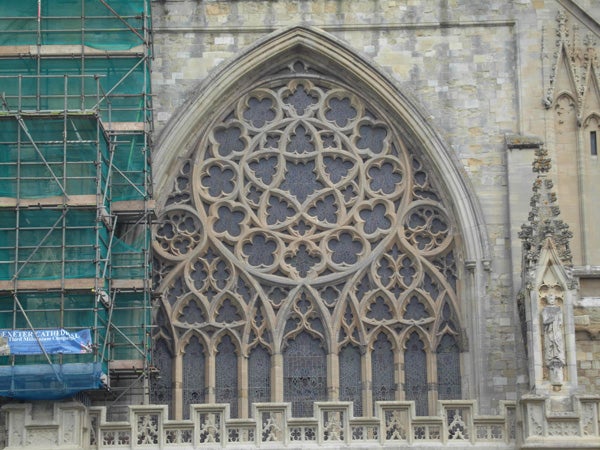 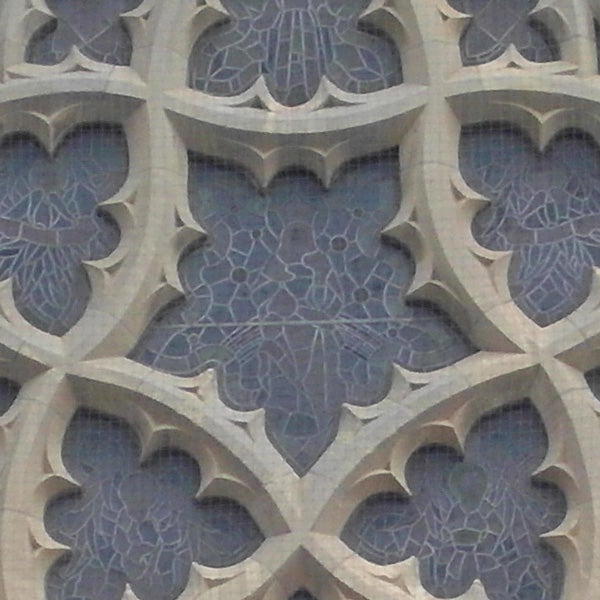 Compare this shot with the 10-megapixel Samsung NV9. The 14.7-megapixel NV100HD produces less sharp fine detail, and less tonal gradation. This was shot in bright sunlight. 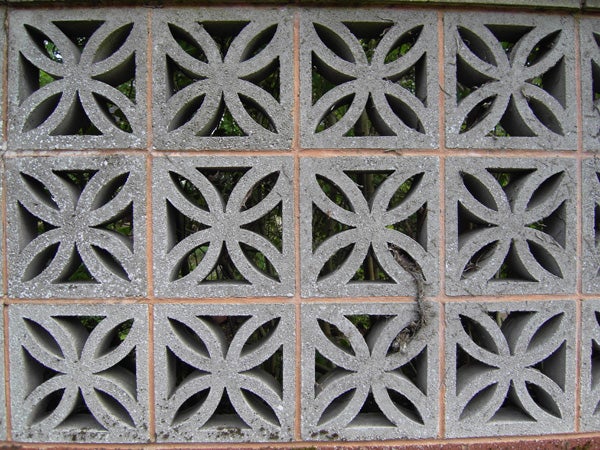 The Schneider-Kreuznach lens produces some barrel distortion at wide angle, but it’s not too bad. 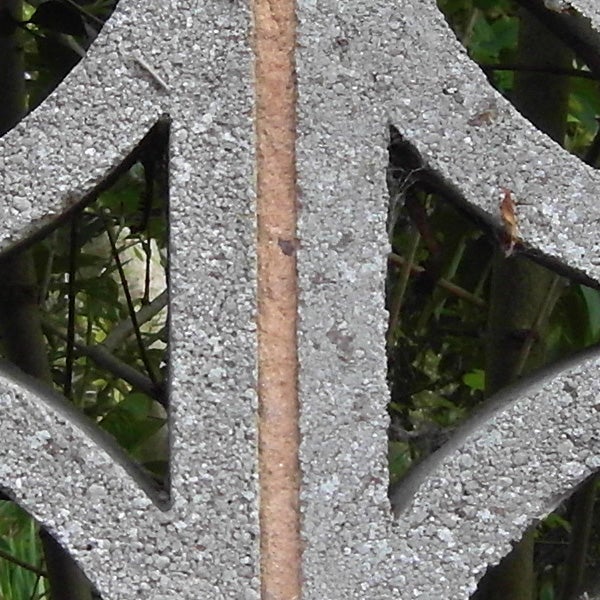 Centre sharpness is quite good, although the image lacks detail. 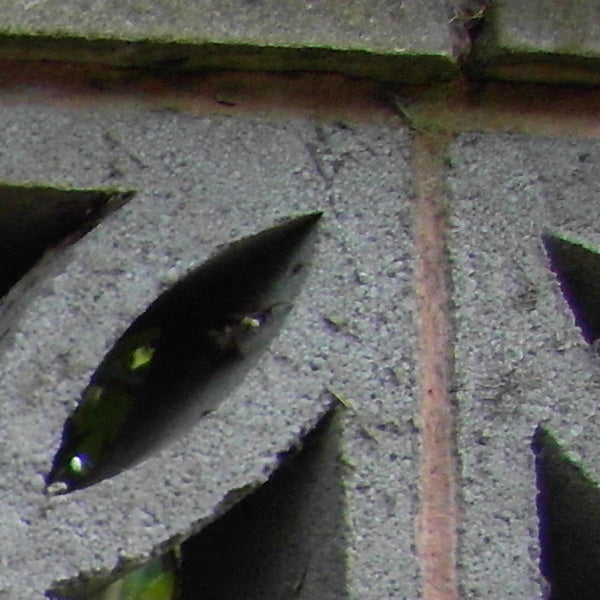 Corner sharpness is also good, although there is some chomatic aberration. 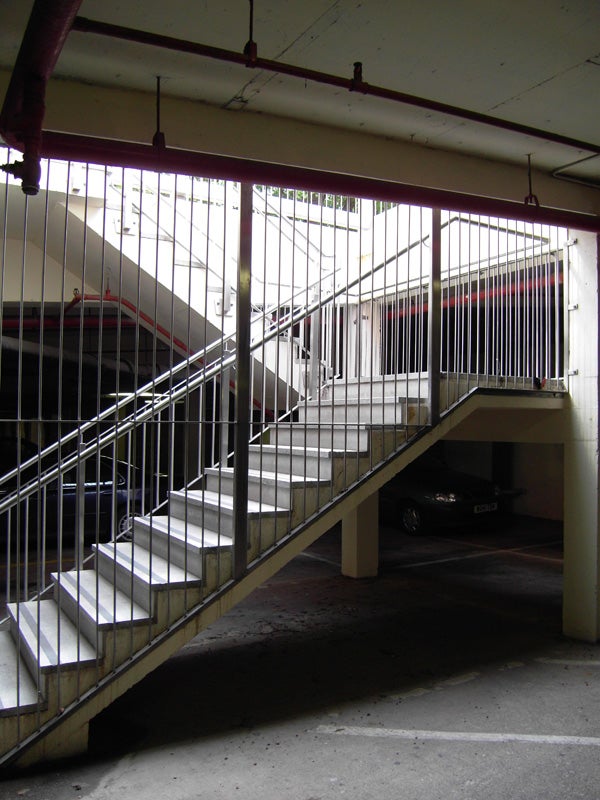 The small over-powered sensor has poor dynamic range. The shadows have almost no detail. 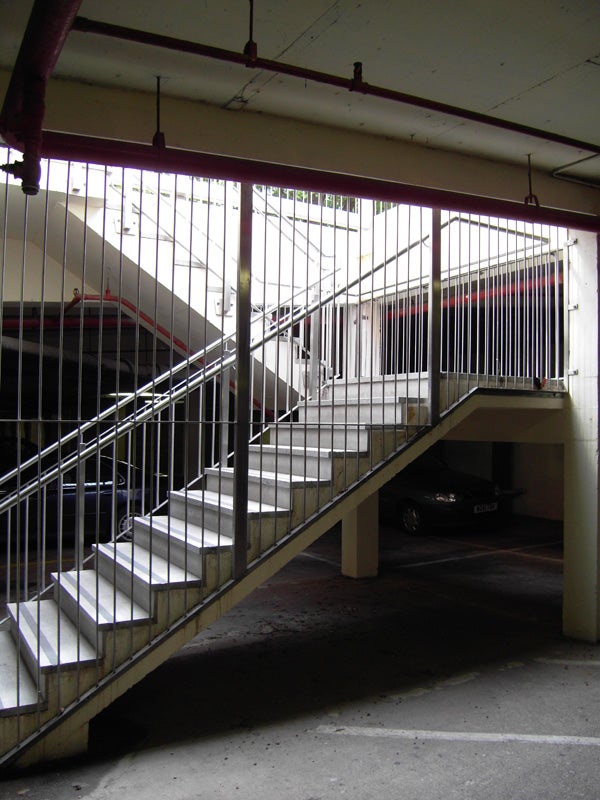 Applying Auto Contrast Balance in playback mode has almost no effect at all. 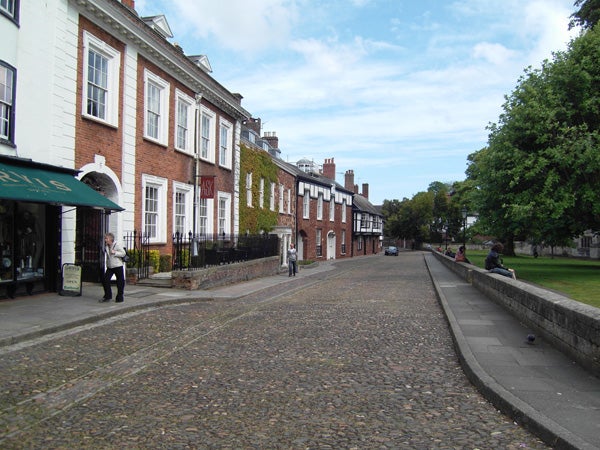 The wide-angle end of the zoom is equivalent to 28mm. 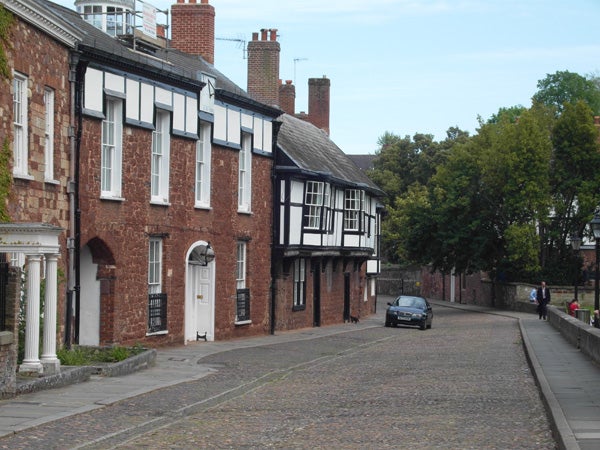 The telephoto end is equivalent to 102mm, pretty short by most standards. 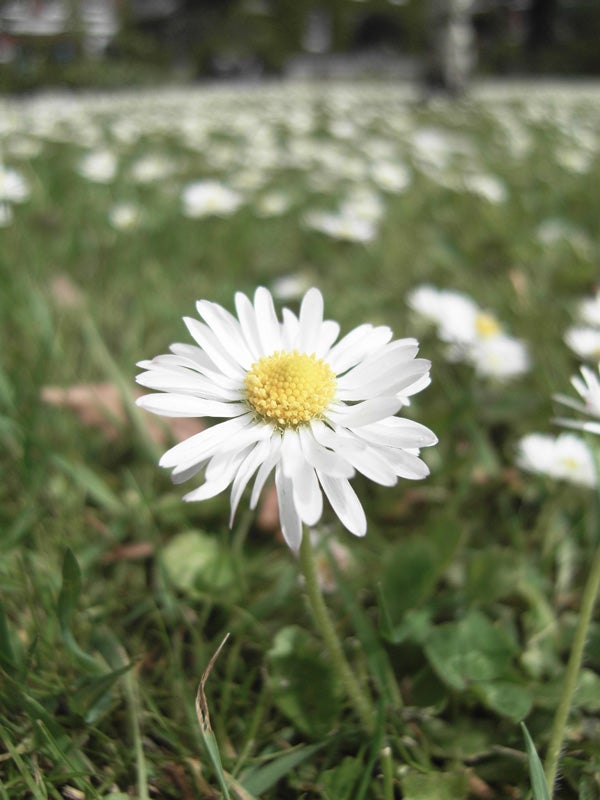 Macro focusing is fast and accurate, with a minimum distance of 3cm. 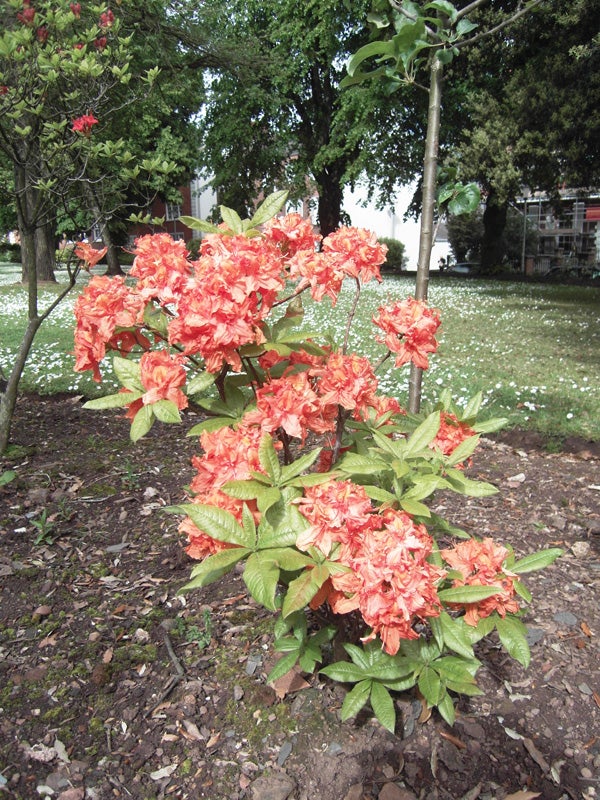 In standard mode colours are pale and lack saturation. 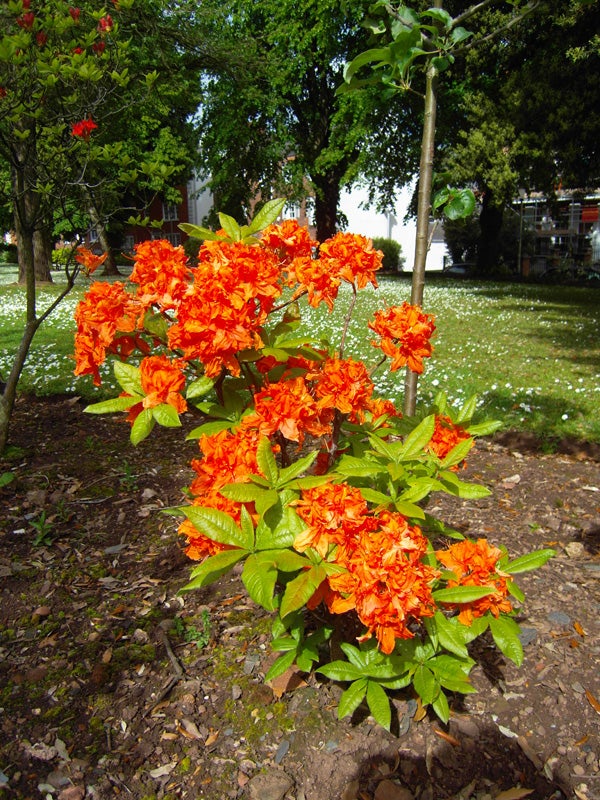 The Vivid colour mode is a bit garish, but at least you can see the colour.