Sitting at the top of Samsung’s premium non-Atmos Sound+ range of soundbars, the Samsung HW-MS750 is a pretty impressive all-in-one solution that prides itself on not needing a subwoofer for low-end welly.

Its performance is in the hands of 11 very capable drivers, including two upward-firing speakers for height, and a few of wide-dispersion tweeters for a breadth. Features are numerous, too: you can count Bluetooth, multiroom and a high-res music support on its impressive list of capabilities. 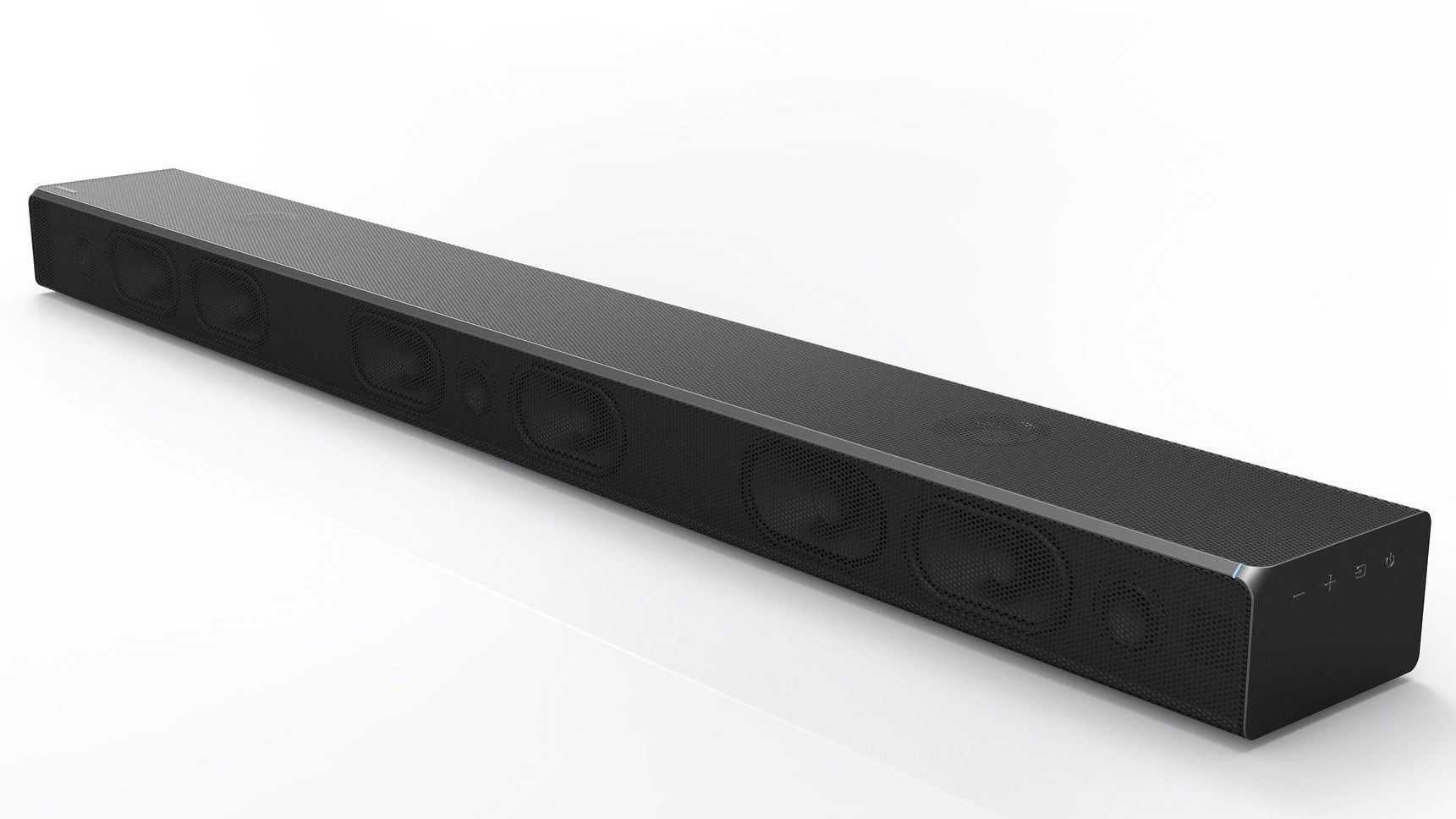 To accommodate those 11 drivers, the Samsung HW-MS750 is pretty sizeable. It just about fits onto my TV rack, and almost matches the width of the 65in TV with which I’m testing the device. It’s a good fit for TVs 50in and up – any smaller and it might look mismatched.

You’ll need some space, then, but it does at least sit relatively low, so it shouldn’t block your screen. I didn’t find it got in the way of my TV’s remote control IR signal either, although you are able to wall-mount the soundbar, if you wish.

The HW-MS750 is very well made, with a metal grille across the front and top panels, and brushed aluminium running along the back and sides. It’s a largely functional, rectangular design, but on closer inspection you will notice a few flourishes; such as its softly curved edges and stylised control buttons.

The unit also features a small display, which provides information such as input, volume level or EQ setting. Note that it has a handy auto-off function, and so turns off after a few seconds so as not to be distracting.

Connections are pretty generous, with two HDMI inputs and one ARC output (all three capable of 4K HDR passthrough at 60fps), an optical and an aux in, plus Bluetooth and Wi-Fi for streaming and multiroom smarts.

All the physical inputs are tucked away on the underside of the soundbar, as well as a USB-C port for adding a wireless dongle for the option W700 subwoofer.

Larger setups that find two HDMI inputs restrictive will have to use their TV’s HDMI ports and hook up to the soundbar via optical (or, indeed, Bluetooth with compatible TVs). However, this will restrict your ability to get higher-resolution soundtracks such as Dolby TrueHD and DTS-HD Master Audio from Blu-ray.

As for how it differs to its cheaper MS650 sibling, there are 11 drivers here instead of nine – thanks to the addition of those two upward-firing tweeters. This makes for five channels instead of three. There’s also an extra HDMI for greater setup flexibility, and its music upscaling is better to boot. Subtle differences, perhaps, but ones that can make all the difference in use. Some of the most impressive features on the Samsung HW-MS750 are those that you can’t even see. Top of these is its distortion-cancelling technology, which predicts when distortion will occur so it can control the driver and prevent it. This helps the MS750’s bass to stay tight – particularly important when its six long-excursion woofers are capable of such a deep and powerful bass response.

These six woofers are supported by three wide-range tweeters, which work to maximise sound dispersion in the room. Each tweeter is paired with a double act of woofers to create centre, front-right and front-left channels, with two height channels via the vertical tweeters along the top.

Since this isn’t an Atmos soundbar, the tweeters point directly up rather than overhead, to add height to the front soundstage. This helps to give the illusion that the sound is coming from your TV screen, not from the bar, and it’s really effective.

The MS750 is also capable of streaming music via Bluetooth (both to or from the device) and over Wi-Fi using Samsung’s multiroom app. The app is actually pretty good, and is clean and easy to use. It serves up streaming services such as Spotify, Tidal, Napster and Deezer built in, plus allows you to stream content from your phone or NAS drive.

It supports high-res 24-bit/96 kHz files natively, but also claims to upscale any music source to 32-bit quality too. 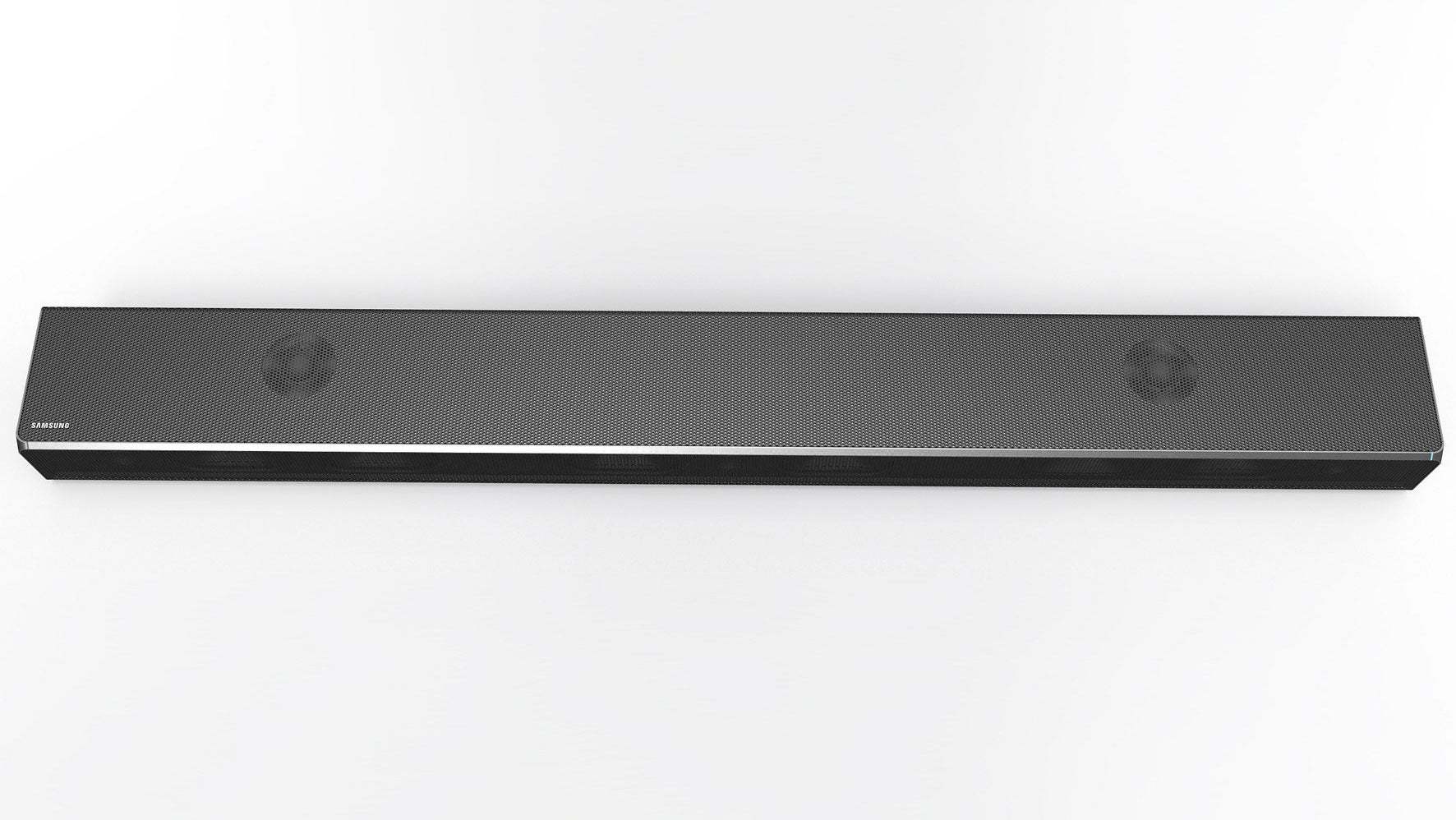 Settle down for a movie and the Samsung HW-MS750 displays a very confident demeanor indeed. Play the opening scene from Star Wars: The Force Awakens and its talents become immediately clear. It throws both authority and precision behind the foreboding soundtrack as the Stormtroopers close in on Jakku.

And while there’s certainly muscle here, there’s clarity too. Dialogue is crystal-clear at all times, and the crisp treble ensures the balance is both up-front and exciting. It’s a clean and accurate sound; one that’s entertaining and dynamic too.

It’s in this regard that the MS750 pips the similarly priced Sonos Playbar. There’s arguably more weight to the Sonos’ performance, but it isn’t as expressive in its delivery, nor does it throw its sound quite as wide as the MS750.

But it isn’t only the width – there’s plenty of space to the MS750’s presentation and a good sense of stereo separation too. Add in those height channels and you’ve got a very immersive sound indeed. The HW-MS750 delivers sound straight at you, rather than it feeling like it’s coming from the soundbar itself.

Bass response is impressive for the soundbar’s dimensions – deep, well controlled and punchy enough to deliver the necessary impact to any action scenes.

However, the addition of the W700 subwoofer (£300 when bought with the soundbar; £500 separately) places the MS750 in its element, delivering additional low-end rumble, not to mention added solidity to the rest of the frequency range.

The soundbar is easy to accommodate as well. It integrates seamlessly; it’s entirely wireless and so can be placed anywhere in a room. Add the above together and it makes for a pretty pricey package all-in, but it’s a worthwhile pairing if you can make the leap.

I’m not always one for EQ settings, but the Samsung HW-MS750 has a number of useful ones you might fancy playing around with. These include Movie, Music, Clear Voice, Sport and Standard.

Movie does what you might imagine it to– bass and treble sound boosted and there’s more scale to the sound than on Standard. It’s also a little less focused in the mid-range, and so the treble can be a touch harsh at volume – particularly in the midst of heavy gunfire, for example. It can help to add more theatrics to action scenes, if you don’t punt for the W700 though.

Elsewhere, Sport boosts atmospheric noises, Clear Voice prioritises dialogue, and Music is intended to improve the sound of your tunes. Personally, I prefer the balance and solidity of Standard mode, particularly for music, but they’re all worth a listen. You can even use Samsung’s Smart mode, which will adjust its setting automatically depending on what you’re listening to.

Speaking of music, as is often the case with premium soundbars now, the MS750 doubles up as a pretty decent wireless speaker, delivering music with detail, musicality and bite.

There’s plenty of drive here for more upbeat songs, such as Kanye West’s ‘Black Skinhead’, but it also has the dynamic wherewithal to take on the likes of Hans Zimmer’s ‘Cornfield Chase’. Timing and organisation isn’t quite as tight as you’ll hear on the Sonos Playbar, but there isn’t a lot in it.

Once again, the W700 helps to add an extra layer of solidity here – but even without it, the MS750 delivers sound that’s as likeable and as entertaining as it is when watching movies. The Samsung HW-MS750 is a hugely capable soundbar that will transform your movie watching, delivering low-end rumble, a clear and detailed mid-range, plus a crisp and exciting treble – all in one smart-looking package.

The scale it’s able to produce is quite something too, with superb stereo separation and plenty of space for dynamics to thrive. It’s brilliant with music too.

Where it struggles is its price and placement in Samsung’s catalogue. At £699, it isn’t cheap – and as such you might be tempted to go further and invest in Atmos, or go lower and opt for the £200-cheaper Samsung HW-MS650 (which is almost as good).

The extra height offered by the MS750 is noticeable, though, and that extra HDMI will be key to some larger setups too.

If you have the budget, the Samsung HW-MS750 should definitely be on your shortlist. And if you can stretch to the W700 subwoofer too, then your movies will thank you (even if your neighbours won’t).

A hugely capable soundbar that delivers big movie sound and plenty more besides.