The Samsung Galaxy J3 runs Android 5.1.1 and TouchWiz, the long-standing Samsung custom Android skin. If you owned a Samsung a few years ago, you should be pleasantly surprised by how it looks and feels in 2016.

It’s simpler and prettier than it used to be, because Samsung has let go of its original “add as many features as will fit, then add some more” approach. These days, the top layer of TouchWiz looks clean and attractive – far more so than what LG slops out. 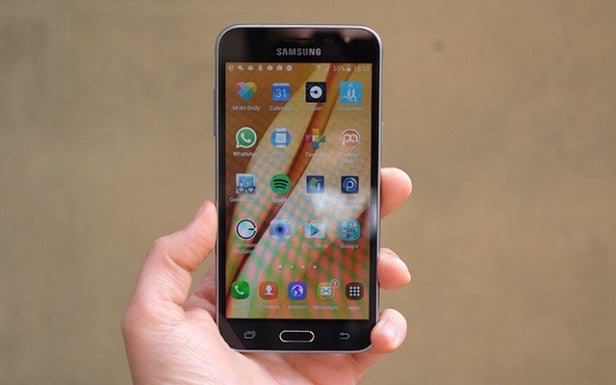 Dig a little deeper and there’s plenty to satisfy the nerd core crowd too. You can add folders to the apps menu, change its arrangement and use themes to reskin the phone. Unlike the early days, most of these are available at extra cost, but there are plenty of freebies too.

Those reading carefully will already have spotted that the Samsung Galaxy J3 doesn’t use the latest version of Android. Since the phone has a UI that takes over how the phone looks and feels anyway, the biggest difference here is the lack of Google Now on Tap.

In the Samsung Galaxy S7, you can long-press the main select button to make Now on Tap scan the screen for relevant topics it can look up online. Is it a big deal? While I was quite impressed by Now on Tap when it arrived with Android Marshmallow, I don’t use it day-to-day. Sorry, Google. 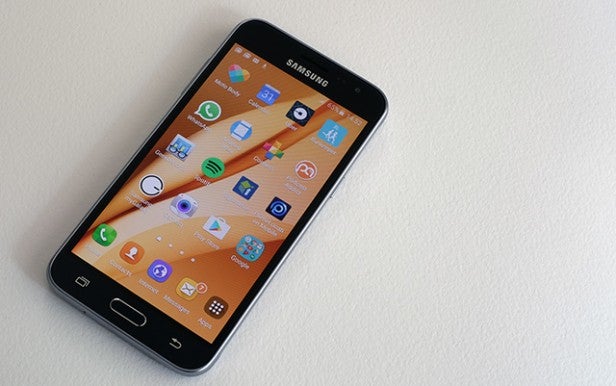 However, whether a result of its hardware or dated Android software, the Samsung Galaxy J3 isn’t a particularly fast phone. While not routinely plagued by lag, apps take slightly longer to load than is the case with rival handsets, occasional stutter is evident, and performance drops when background activities such as downloads are in progress.

I experienced a few frustrating moments – the phone equivalent of a car stalling – and as a result I’d rate the Samsung Galaxy J3’s performance as only just acceptable for the cash. The 2GB RAM Moto G feels faster, as does the Oppo F1.

Samsung uses lower-end hardware than both of those phones. The Galaxy J3 has a Spreadtrum quad-core 1.2GHz processor, using cores of the aged Cortex-A7 32-bit architecture, alongside 1.5GB of RAM.

It isn’t a fast chipset, and its SoC doesn’t appear to be as reliable as the more common Qualcomm alternative – the Snapdragon 210 – either. I’ve had a number of problems with the Galaxy J3 failing to connect to Wi-Fi, which may be down to conflicts between the Wi-Fi chip and the Netgear router I use. Such problems when using chipsets from the big manufacturers are rare.

The Galaxy J3 scores 1,258 points in Geekbench 3 – which is lower than the latest Moto G – and 26,076 in AnTuTu, which is significantly lower than the 31,071 of rival Oppo F1. The J3 will do the job for higher-end games, but the top visual settings (where applicable) will likely be locked off. Dead Trigger 2 lets you use only “medium” visuals, for example, and there are some frame rate hitches even at that setting.

It’s possible to get significantly faster phones for the money. Also note that unless you invest in a microSD cars, you’ll have to juggle games – storage is exceptionally tight here.