The Samsung Galaxy J3 is a low-cost phone that makes a few too many compromises.

What is the Samsung Galaxy J3?

If you’re after a more affordable taste of Samsung’s smartphone stylings then the £150 Galaxy J3 might serve as a suitable fit. It packs in some premium touches, like a Super AMOLED display but beyond that might run a little dry in terms of interest for some users.

The problem is that it neglects some of the basics, resulting in a patchwork of the rather good and really quite bad. The Motorola Moto G offers a far more consistent experience for similar money.

The Samsung Galaxy J3 is what you’d get if you set out to make a Samsung Galaxy S7 with about a third of the budget. Where an expensive handset might use glass or metal, here you’ll find plastic.

The J3 isn’t flashy, and the thin plastic battery cover feels like a trip down memory lane: Samsung used to use these in almost all of its phones, even the pricey ones. None of this matters when we’re talking about a £150 handset, however; a cheap phone feeling a little cheap is no disaster. 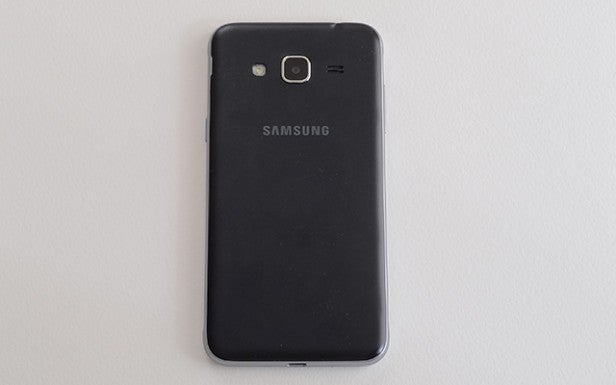 Samsung has directed some extra pennies towards making the central select button feel good too. It’s one of the few metal parts on the device, and shares the ultra-pronounced click experienced on Samsung’s top-end phones.

Also a standout feature is the inclusion of NFC, although this could easily have been omitted from the phone without the budget audience even noticing.

There’s only 8GB storage, however, which is already strained by the preinstalled Office suite. Within only a few days, I had run out of storage. I’d much rather have 16GB storage than NFC in a phone of this price, and as we’ll see, questionable priorities are a theme of the Samsung Galaxy J3.

Note that the phone does feature a microSD slot beneath the back cover, so limited memory isn’t a reason to dismiss the J3 altogether. 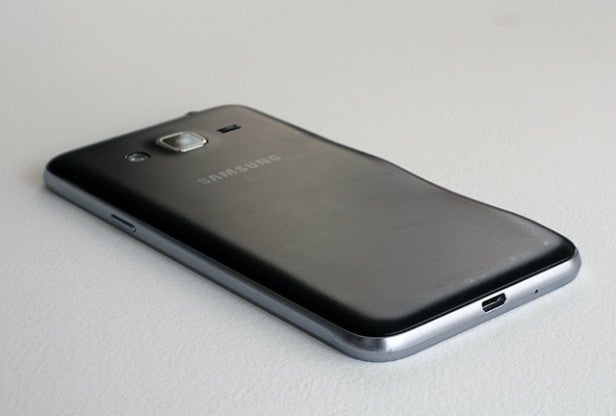 If you don’t attach all the back panel clips, it will lead to a bumpy exterior such as this

The most annoying hardware omission is an ambient light sensor; almost every phone has one of these nowadays. It sits above the display, providing the phone with information on the ambient light level, so it can boost or dim the screen backlight accordingly. Without one you have to flick up the brightness as you head outdoors, then manually dial it down once indoors again. 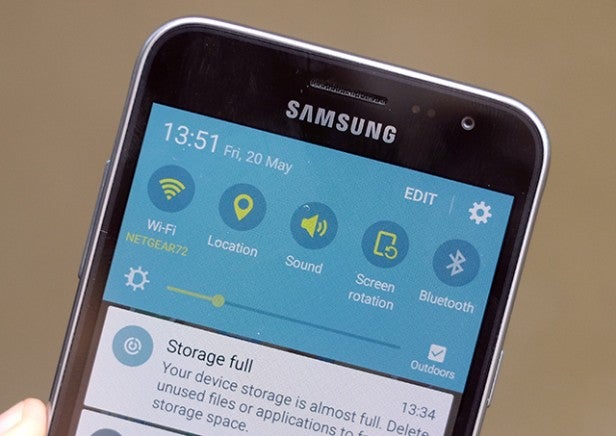 What the Samsung Galaxy J3 offers instead is an “outdoors” mode, which sits where you might normally see the Auto brightness button. This boosts the display to let it deal with super-bright days – and it works brilliantly. I’ve been using the phone alongside the LG G5, and this handset is far better at dealing with bright, direct sunlight.

It’s all down to four little letters: OLED. Almost all phones costing less than £200 include LCD panels, but the Samsung Galaxy J3 has an OLED one. These screens feature emissive pixels and tend to provide richer colour, always delivering better contrast than LCD panels. 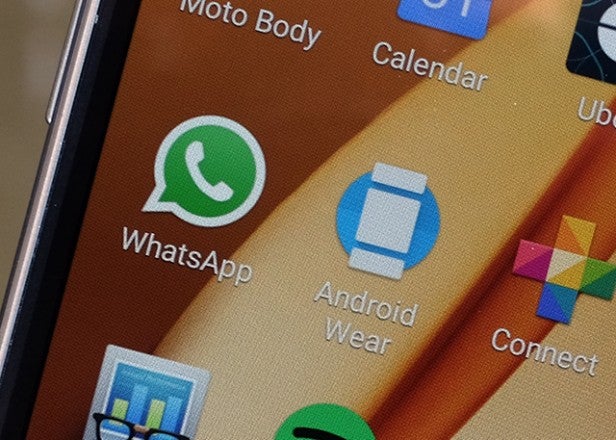 Samsung is a master maker of OLED phone panels, so it’s no surprise to see such an addition in its pocket money handset. Specs-wise, though, the Samsung Galaxy J3 screen is fairly ordinary.

It’s a 5-inch 720p-resolution display, matching the Motorola Moto G. Since it uses a PenTile architecture, there’s a certain fuzziness to the screen that isn’t apparent in a rival LCD. My eyes became accustomed to this fairly quickly, though.

The J3’s display is pretty decent when it comes to performance. Colours have a pop that you don’t often see on budget devices, and while they’re oversaturated to begin, the Samsung Galaxy J3 includes the same set of screen customisation modes seen in top-end Galaxy models.

Switch to “Basic” and you’ll achieve a relatively natural colour tone, although calibration doesn’t have the accuracy of a Note 5 or Galaxy S7. 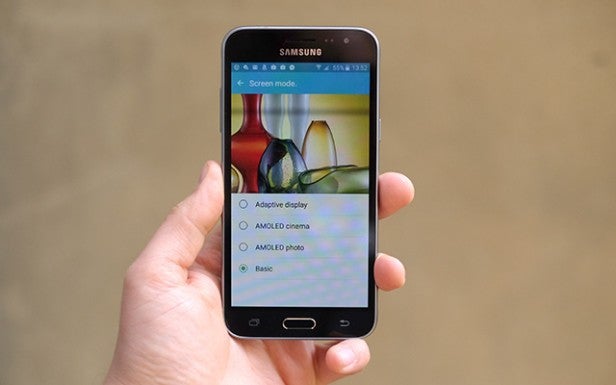 Contrast is excellent, and since it’s an OLED panel, the Samsung Galaxy J3 will look great in dark rooms, which tend to show off the limited blacks of all but the best LCDs.

On the downside, however, the panel isn’t made of Gorilla Glass, as seen in the Motorola Moto G. This is a tough, scratch-resistant glass that is increasingly commonplace in handsets these days. Although Samsung’s cheaper alternative seems adequate; I haven’t managed to scratch the panel too badly yet.