First things first, let’s deal with the issue of that resolution. If you’re used to a conventional 27-inch monitor and sit a typical 50cm or so from your screen then the CHG90 will appear a little blocky and pixellated.

However, since this is quite a sizeable screen you may be inclined to position it a little further back, which will make everything look sharper. Meanwhile, those accustomed to 24-inch displays are unlikely to notice the difference much. Nonetheless, this screen is more about the spectacle of it being so large and wide than it necessarily being the most practical way to fit as much resolution as possible on your desk.

But what a spectacle it is. Plus, it does still have its practical benefits too. 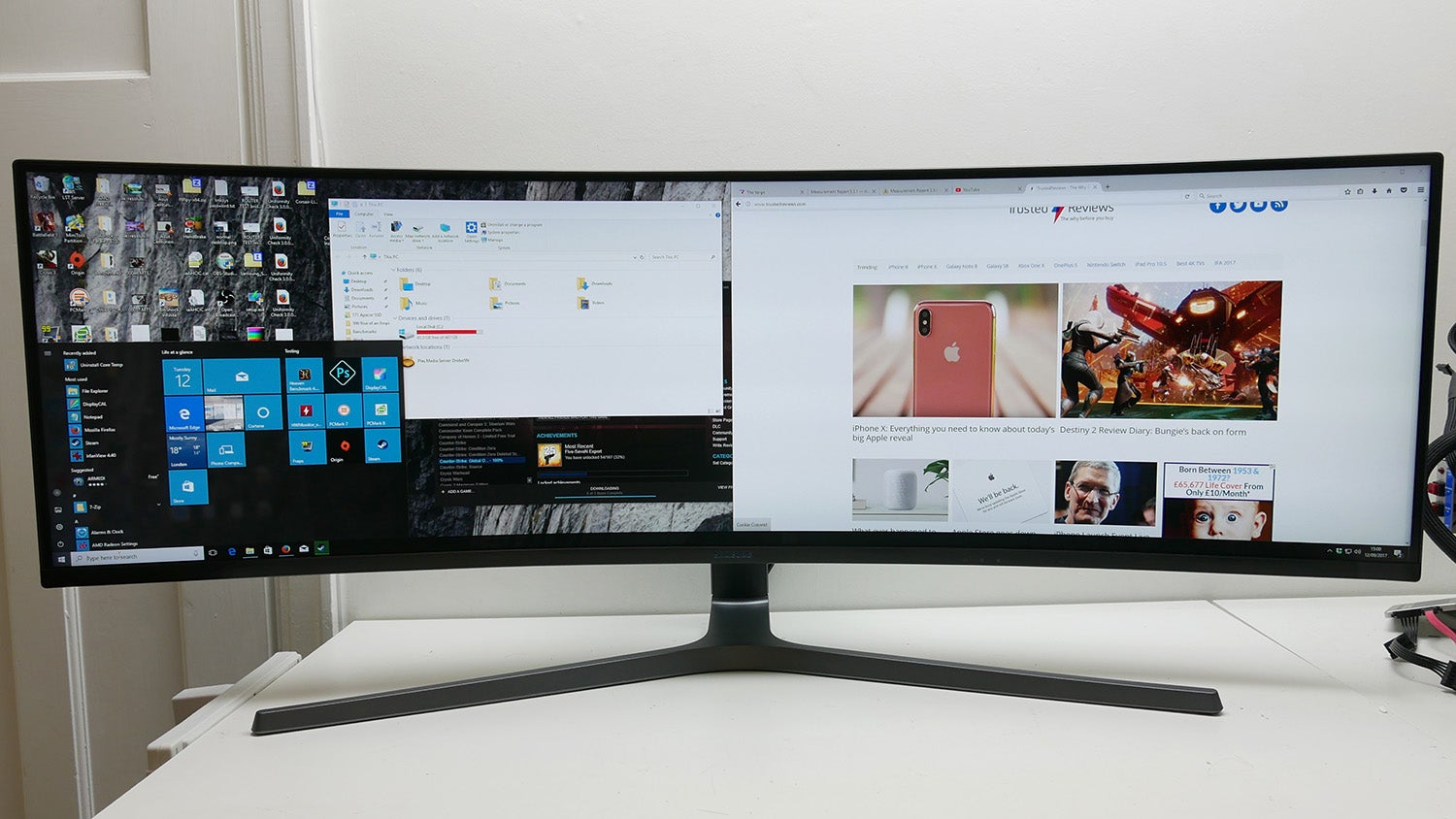 For instance, take Windows 10’s Snap feature, which allows you to quickly make a window fill a half or a quarter of your display. On most monitors it’s of limited use, but here you can snap one window to the side and it automatically fills that whole 1920 x 1080 side of the screen. This makes it super-convenient for quickly arranging and prioritising your whole desktop.

There’s also the option of using picture-by-picture to the same effect, but with two different video sources. Want to play your Xbox while still being able to see emails come in and control your music? No problem at all. You can also download Samsung’s Easy Setting Box software to enable further control over how the screen is split up into different sections.

As for overall image quality, it’s fantastic. Thanks to each display being calibrated before it leaves the factory, the CHG90 should arrive good to go – and sure enough this was the case with our particular unit.

The two most common issues of monitors that haven’t been calibrated properly are the colour balance and gamma. Other settings can make a display look poor, but most are inherent to the technology or the way it’s been put together. These two settings are the easiest for manufacturers to tweak after the fact.

As such, all too often perfectly reasonable displays will ship uncalibrated and so colours will look off balance or dull and washed out – despite the display being capable of doing much better. The CHG90 displays the perfect colour balance and gamma setting.

Added to this is the inherently brilliant contrast of the VA LCD panel. Samsung claims up to 3000:1, and while I didn’t quite hit that level, the monitor did still manage 2800:1. That’s vastly superior to any IPS or TN LCD panel and immediately gives the display a punchiness and depth that most others can’t match. These figures also put the CHG90 ahead of most other monitors with regards to reproducing HDR content.

As for colour accuracy and depth, this display actually exceeds the requirements for the normal sRGB colour space used in every day computing thanks to its quantum-dot backlight technology. This is so that it can better represent HDR content, but it can also mean that colours sometimes look a touch oversaturated. This isn’t a problem most of the time, but if you’re a professional who regularly edits pictures or video then you may be better off with a display that more strictly adheres to the sRGB space.

Also, while the colour gamut here is wider than sRGB, it doesn’t stretch as far as full Adobe RGB coverage. As such, those who require that level of coverage will have to look elsewhere.

As for the curve, viewing angles and general uniformity of the display, the CHG90 continues to impress. The curve helps to present the far edges of the display at a better angle than if the display were flat, reducing the potential problems of viewing an LCD panel at an acute angle.

Not that this display has particularly poor viewing angles. Moving from left to right, there’s very little change in the image – and while there’s a slight change in overall brightness from top to bottom, it’s subtle enough to largely go unnoticed, especially if you sit a little further back.

Meanwhile, despite the enormity of this panel, the image stays surprisingly even right across its width. There’s just a 2.2% average variation in brightness between the centre and the rest of the panel and just a 2.6% variation in colour temperature.

All told, this is a top-quality monitor in nearly all aspects of its image quality. 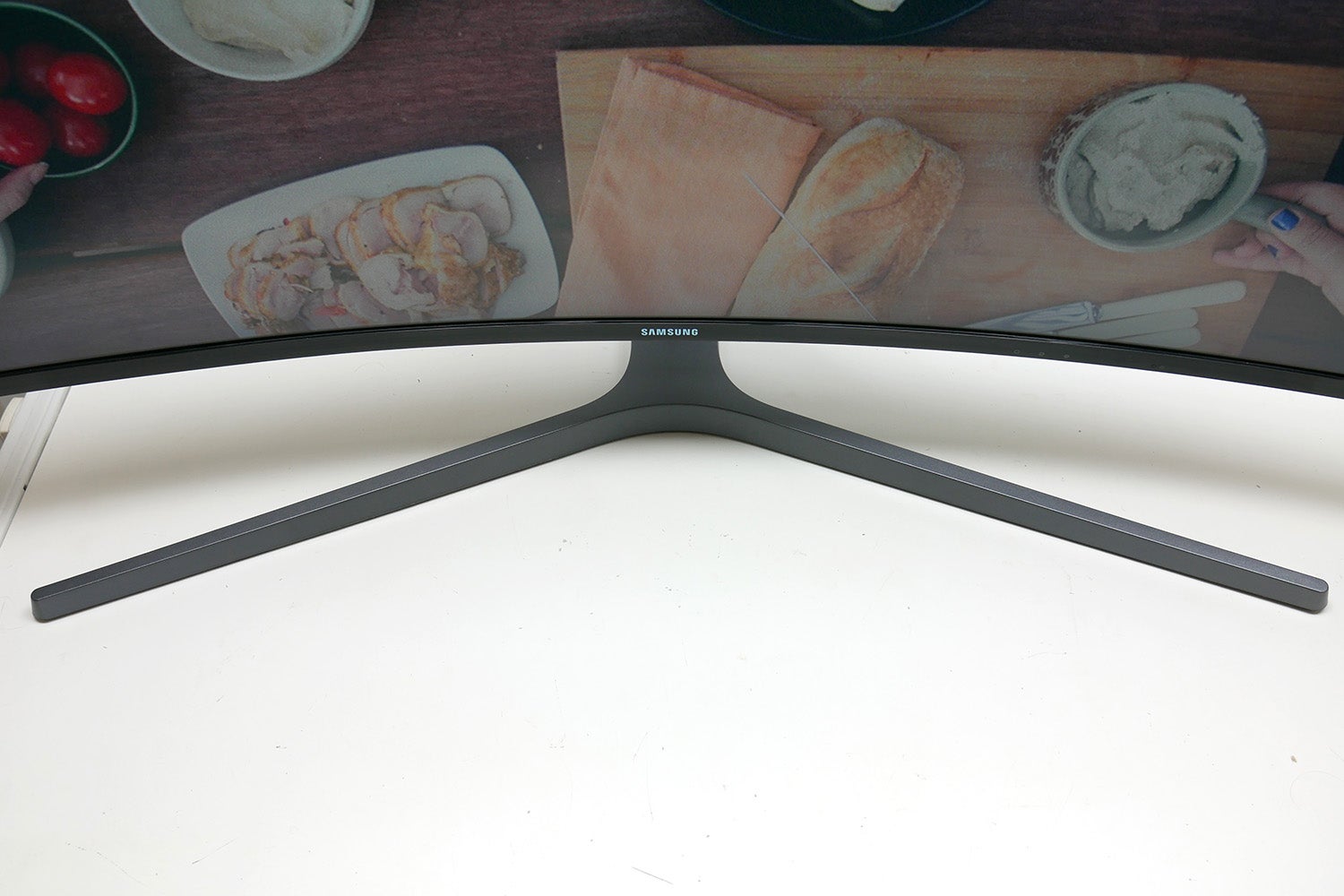 Samsung is making a big deal of the HDR capabilities of this monitor and its sibling, the CHG70. Thanks to the native contrast ratio of its VA LCD panel, the high 600nits maximum brightness of its backlight and its extended colour gamut, this display can reproduce the greater range of colours and brightness levels that HDR requires.

To get the full low-down on what HDR is and what’s required of it, read our guide to HDR TVs and the HDR page of my CHG70 review. Essentially, it makes images more dynamic, more life-like – more colours, greater depth, and so on – and the CHG90 does a good job of demonstrating that.

Fire up an HDR game or video and you can see greater variation in colour, more detail in the brightest and darkest areas of the image; the whole thing just has a greater sense of realism.

However, the key things to note are that HDR support on Windows is currently rather flaky, meaning you constantly have to manually switch HDR support on and off, depending on the type of content you’re watching. Moreover, there just isn’t that much content at the moment. Much of the HDR video that the likes of Netflix and YouTube have made available doesn’t playback properly – it only works through apps on HDR TVs – and most Windows video players don’t support it either.

This mainly just leaves a handful of games, and you can plug an HDR-ready Blu-ray player or games consoles into the HDMI inputs and this will work too.

As such, while nice to have, HDR isn’t perhaps the big selling feature of this display. It’s more that it’s there for when support improves. Crucially, the only way you’ll get better HDR is from OLED displays or LCD units that use full array local dimming backlights – both are which are far more expensive technologies and still very rare when it comes to monitors. 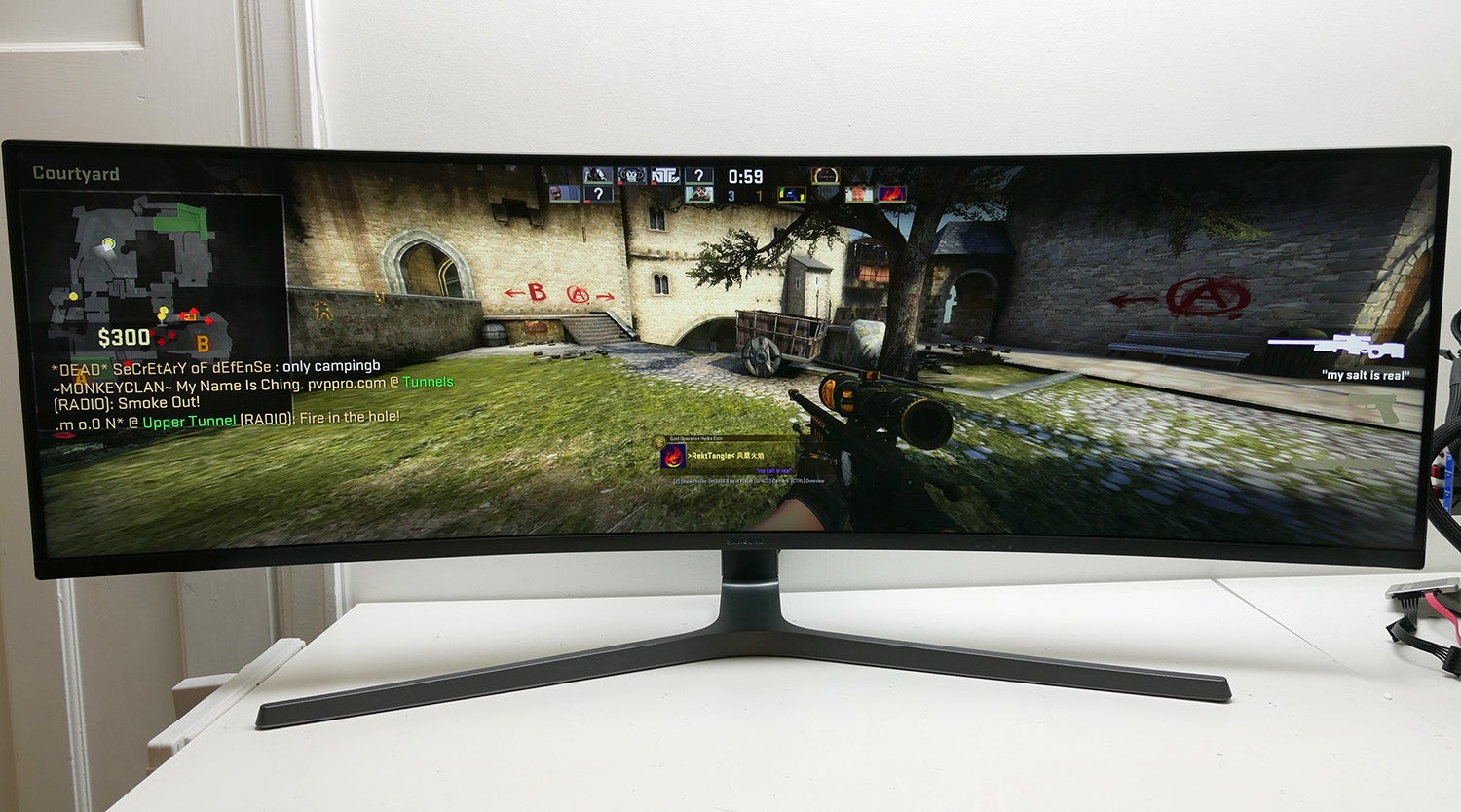 Thanks to this display’s resolution being double that of 1080p, game support for its massive 32:9 aspect ratio is surprisingly good. Exactly how each game deals with the resolution will vary, but the majority of modern games will at least work.

Meanwhile, the 144Hz refresh rate, FreeSync and native response time – which Samsung hasn’t specified, but which is better than other VA LCDs I’ve experienced – combine to make for a great gaming experience.

What’s more, this display has a backlight-strobing technology to reduce the perceived response time, making for an even sharper, more responsive gaming experience. However, this can’t be enabled at the same time as FreeSync, and Samsung also doesn’t allow you to adjust brightness with it turned on. That’s why it’s all the more useful that you get those menu presets – you can have one for desktop use, one for slower-paced games where you care more about having the image quality of FreeSync, and a third one for competitive gaming where response time matters.

Should I buy the Samsung CHG90?

On the one hand, the Samsung CHG90 absolutely nails its remit as being a spectacular and rather convenient way of essentially having two monitors in one. It’s certainly big enough and has all the connections and key features you’ll need to get the most from such a large screen.

Add in the fact that it also offers excellent image quality, fantastic gaming performance and can do HDR and it becomes ever more compelling.

The only fly in the ointment is the relatively low resolution considering its size. Having a higher resolution would make things more complicated in terms of needing to use multiple video connections and being limited when it comes to refresh rate, but would make for an even more impressive and practical result with regards to desktop work.

Nonetheless, this is far from a deal-breaker and overall this display is a seriously tempting proposition.

This gargantuan screen is stylish, feature-packed, great for gaming and has excellent image quality.