Moving right from the potential-packed but ultimately flawed Movies & TV Shows menu gets you to Photos, Videos & Music. This aggregates your personal photo, music and video collections from any connected sources available – including any computers equipped with Samsung’s AllShare software; SugarSync; Dropbox; SkyDrive; USB devices; and PTP picture storage devices like mobile phones or cameras. 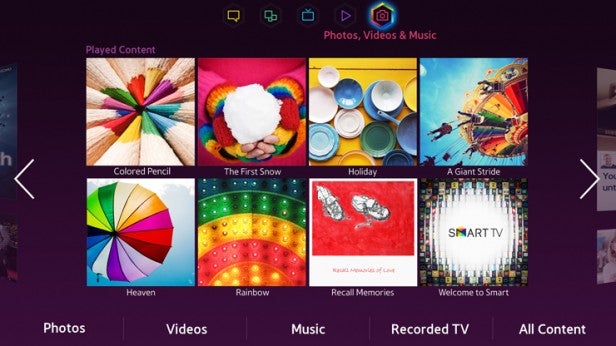 This part of Samsung’s home page system is pretty self-explanatory – and useful – versus the other two sections. Something which can’t be said of the Social page you get to if you scroll to the right again.

The Social header kicks off with a big ‘Friend’s Picks’ box which, research uncovers, shows any videos that might have been shared by your Facebook and Twitter friends. This box failed to work for us during our tests, alas, so we weren’t fully able to get to grips with its potential. But from seeing photographs of how it generates content, we’re not entirely convinced that it’s the sort of content people really want to see highlighted right away on their social page.

After all, videos are just a small part of the social media experience, so it seemed to us that it would be much better just to have straight Twitter and/or Facebook timelines coming up right away when you enter the Social home page.

Again, the content aggregation system Samsung is employing with this Friend’s Picks approach is very clever on a technical level. But as with the Movies & TV Shows aggregation menu, it’s maybe a bit too clever for its own good, leaving you once more feeling like you’re being told what you should be looking at rather than just being allowed to get straight to what you actually want to see. 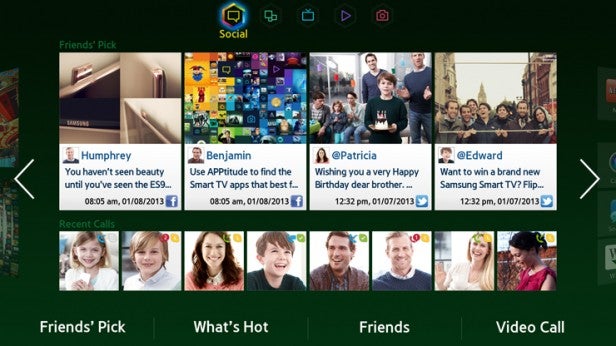 A smaller window on the Social home page is a Recent Calls box for Skype, which really is a genuinely useful shortcut to using the camera built into the F8000 models for video calling friends and family.

Further links along the bottom provide access to What’s Hot (essentially a list of the 50 most ‘trending’ videos on Youtube), a separate Video Call directory listing all your Skype contacts; and a Friend’s page that presents the icons and names of all the people you follow on Facebook and Twitter. This again sounds clever in principal, but in reality it feels rather cumbersome. After all, you only get 14 friend icons on the screen at once, yet many people follow hundreds, even thousands of people on Twitter and Facebook.

In short, the more we used – or tried to use – the Social menu, the more we felt that we really just wanted to have simple jump-off icons to the standard Twitter and Facebook apps, and their usual way of presenting things.

This seems a sensible point to wrap up part one of our exhaustive look at Samsung’s new Smart TV interface. Check out Part 2 tomorrow for a look at Samsung’s latest approach to on-TV apps, its latest alternative control systems, and finally its new support for second Android/iOS functionality.