Shifting across to the right from the On TV header page gets you to Movies & TV Shows – a menu essentially devoted to helping you find and quickly access on-demand content.

It aggregates content from – to quote Samsung – ‘catalogues from selected partners who have worked with us on integrating with our service’.  In principal this is a great idea, of course. The reality, though, as we’ll discover, is a little more complex…

First, let’s quickly discuss the layout of the Movies and TV page. On the left in a large box is a ‘Featured’ film apparently hand-picked by Samsung to represent a specific genre at a specific time – oddly at the time of writing the Feature titled on our review TV was Crazy Stupid Love. To the right of this in slightly smaller form are three Recommended films based again on an assessment of your favourite types of films, favourite actors, etc. And below these three titles are three smaller ones featuring recommended TV shows. 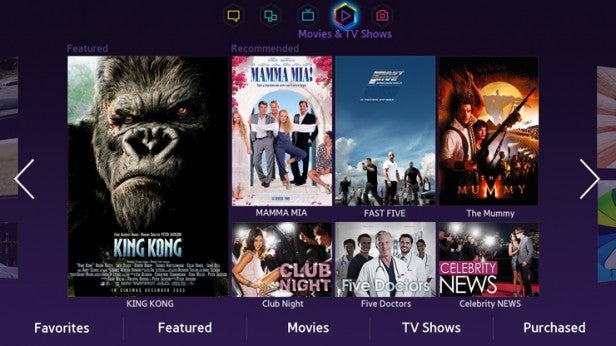 Again the page is extremely attractive, and will seem like the greatest system in the world if you actually want to watch one of the seven films/TV shows it shows. However, again the limit on the link available from the opening screen can also make you feel a little like you’re being dictated to by the TV.

The lack of information on this page is also problematic. You just get the name of the film or show, without any hint of which online platform you’ll be linking too if you decide to watch it. It can be pretty annoying if you click through on, say, a link to Gedeon Naudet’s awesome 9/11 documentary only to find that it’s a £7.99 file available from Acetrax rather than being available under your Netflix or Lovefilm subscription.

Basically, the provenance of every title on every part of the Movies & TV Shows menus should be instantly obvious before you go through all the steps to starting the stream.

We understand the reasons why Samsung has decided not to present much information in the system’s current form; it wants the system to appear seamless, and take all the legwork out of the usual on-demand content-finding process. But unfortunately while the concept is sound, the realities of the way we consume our streamed media doesn’t totally fit with Samsung’s approach in its current form. 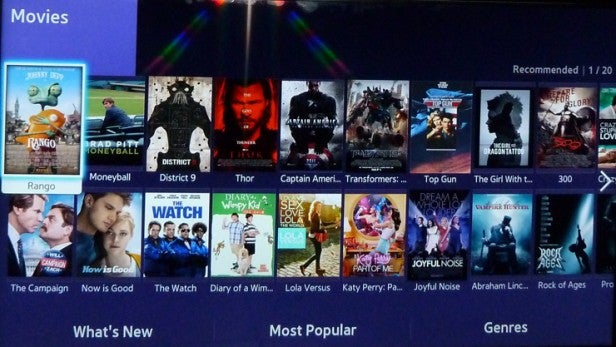 A further problem is that the content providers covered by the Movies and TV Shows page isn’t comprehensive. It only covers content from a relatively small selection of content providers, leaving off a whole plethora of other video services available on Samsung’s platform including, crucially, free ones like the BBC iPlayer and ITV Player. We can readily imagine this content source limitation leading to many users quickly giving up on using the page, choosing instead to just head for their dedicated Netflix or Lovefilm apps.

Clicking through onto specific titles from the Movies & TV Shows menus allows you to give thumbs up/thumbs down recommendations to each title, as well as going through to your Facebook or Twitter accounts so you can make a comment about the titles you’re looking at. You also get a reasonable amount of background information on each title: synopsis, director, release date, genre, writers and so on.

The coolest trick, though, is the way you get a list along the bottom of the screen of ‘connected’ content that’s similar in theme to what you’ve chosen to watch, or other material that the director, stars and other significant crew members have been involved in. 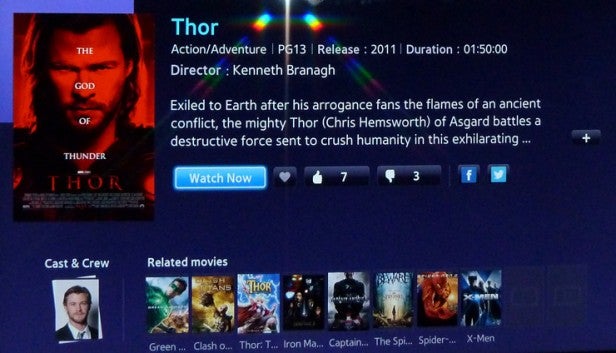 This is a great evidence of the excellent ‘joined up’ thinking at work behind the scenes of Samsung’s new Smart TV app. It’s just a shame the results are hamstrung by how few content providers it’s working with.

Along the bottom of the main Movies & TV Shows screen are a series of links, taking you to Favourites (stuff you’ve identified as being preferred content by pressing a ‘heart’ symbol when accessing it through the TV’s menus); lots more ‘Featured’ (ie, paid for) content; a further Movie market showing many more film-only links; and a further TV market showing many more TV-only links. Each of the content submenus can have their content divided into ‘What’s New’, ‘Most Popular’ and ‘Genres’.