Sage the Smart Oven Air Fry works well as a supplementary oven or a small household standalone, but can be less practical than a simple air fryer. However, if you want air frying plus a whole lot more besides, it delivers, essentially functioning as a speedy compact oven that can turn out pizza and roasted chicken in a flash, or slow-cook tasty dinners to come home to.

Air fryers have almost become a kitchen staple and it’s easy to see why. They are great at turning out low-fat chips and other treats for the health-conscious, and can slash oven cooking times in half. However, they often lack capacity, an issue that can lead to mixed results. Aiming to put an end to singed or soggy suppers, Sage the Smart Oven Air Fry has a different approach to air frying.

Rather than an upright configuration, it takes the form of a small freestanding oven, complete with a single shelf, a wide, shallow air frying basket, a pizza pan and a grill pan. This means that food can be spread out so hot air reaches every part of it, rather than being heaped up and shaken throughout cooking to even out the results. 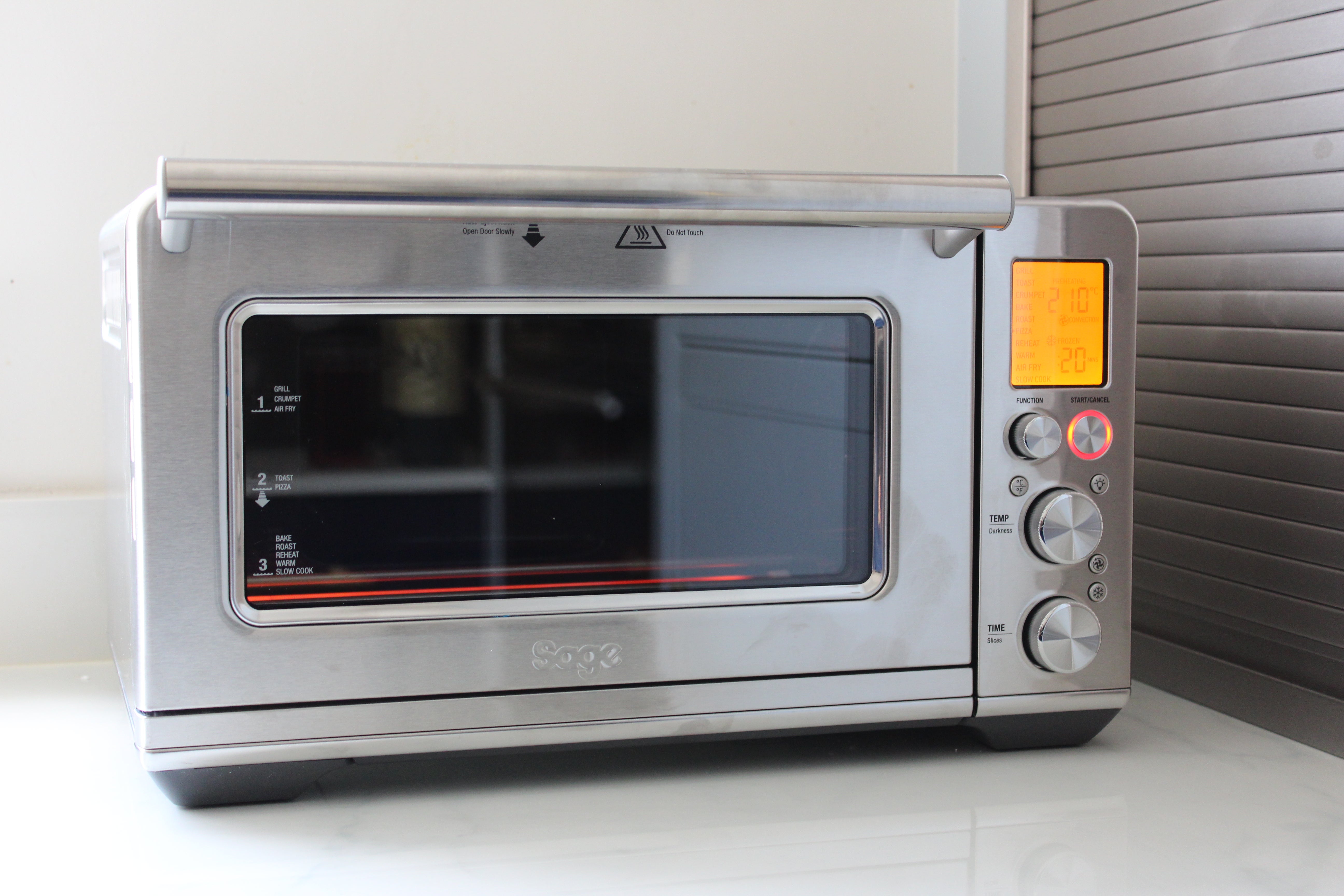 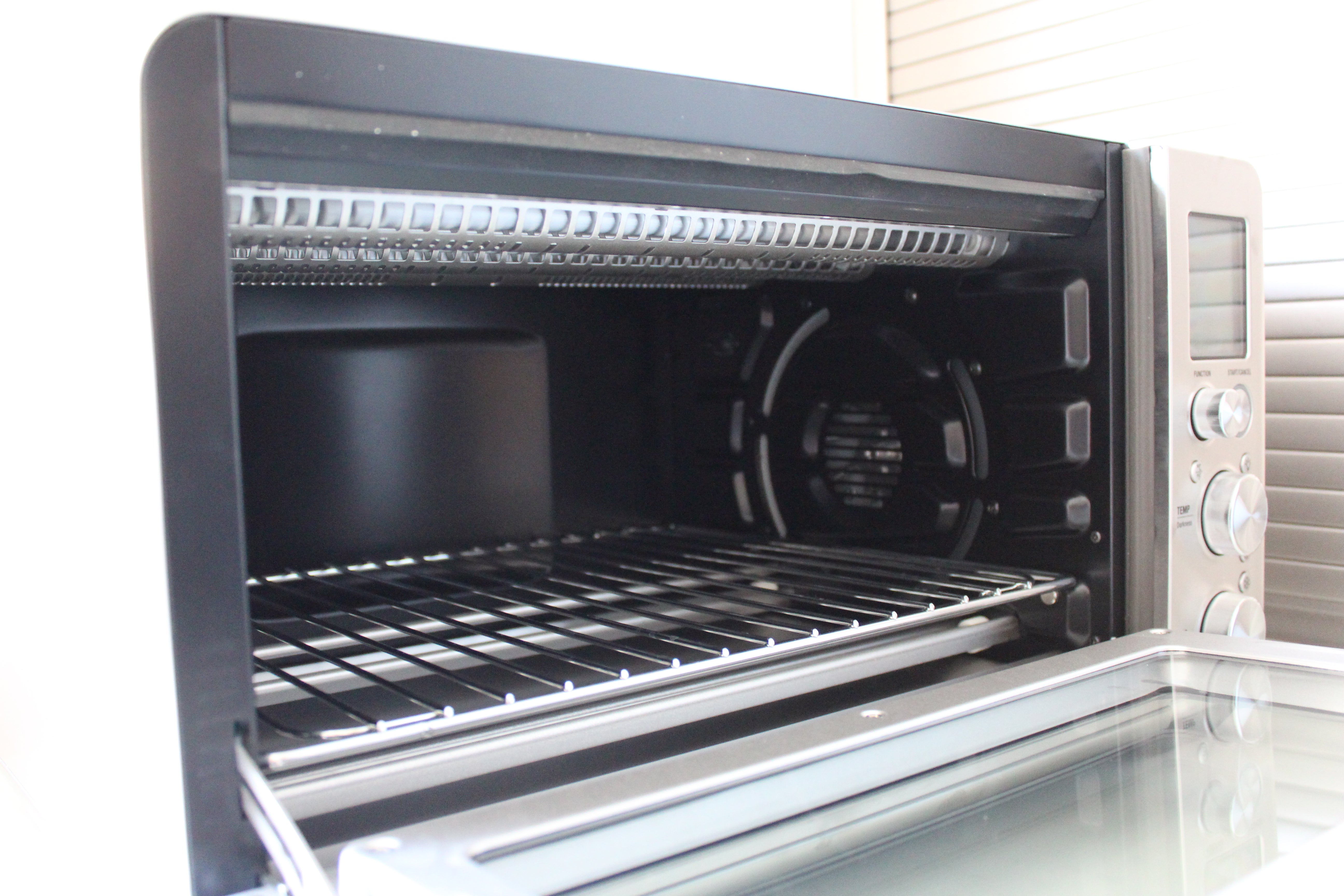 There’s plenty of room inside to lay food flat

Air frying is a fast way to cook, but it can be imprecise – especially when you factor in losing heat every time you take out a basket of food to shake it. The Smart Oven Air Fry aims to use technology to solve this. There is no need to move the contents around, as they’re spread thinly, and it employs independent heating elements and maximised airflow, known as super convection, to achieve its crispy air-fried results.

The other trick up its sleeve is Element iQ, which directs power to where it’s needed, using sensing and digital PID temperature control. This is a fancy way of saying that the air fryer prevents cold spots. 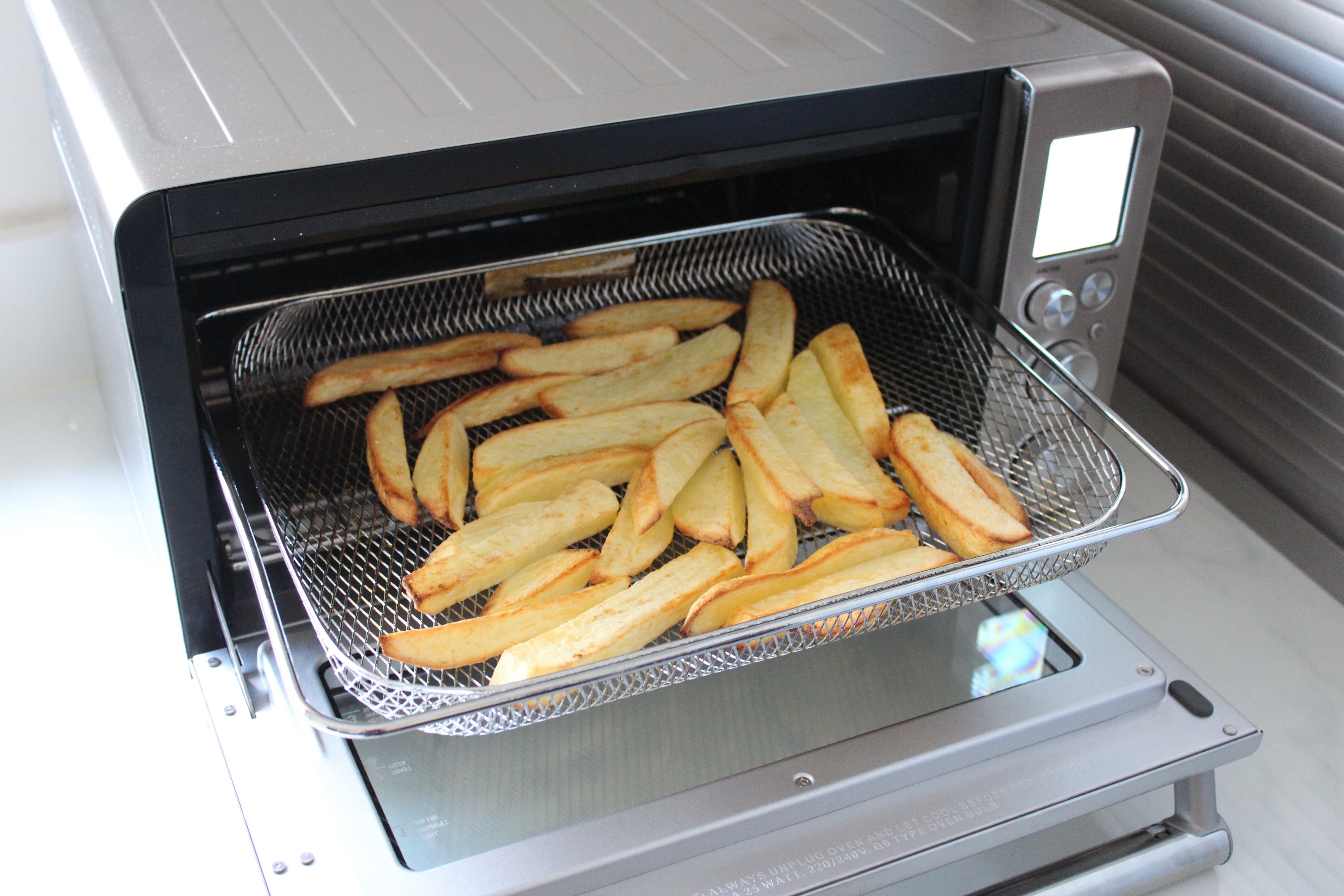 Chips generally come out very evenly cooked, even when only using a little oil 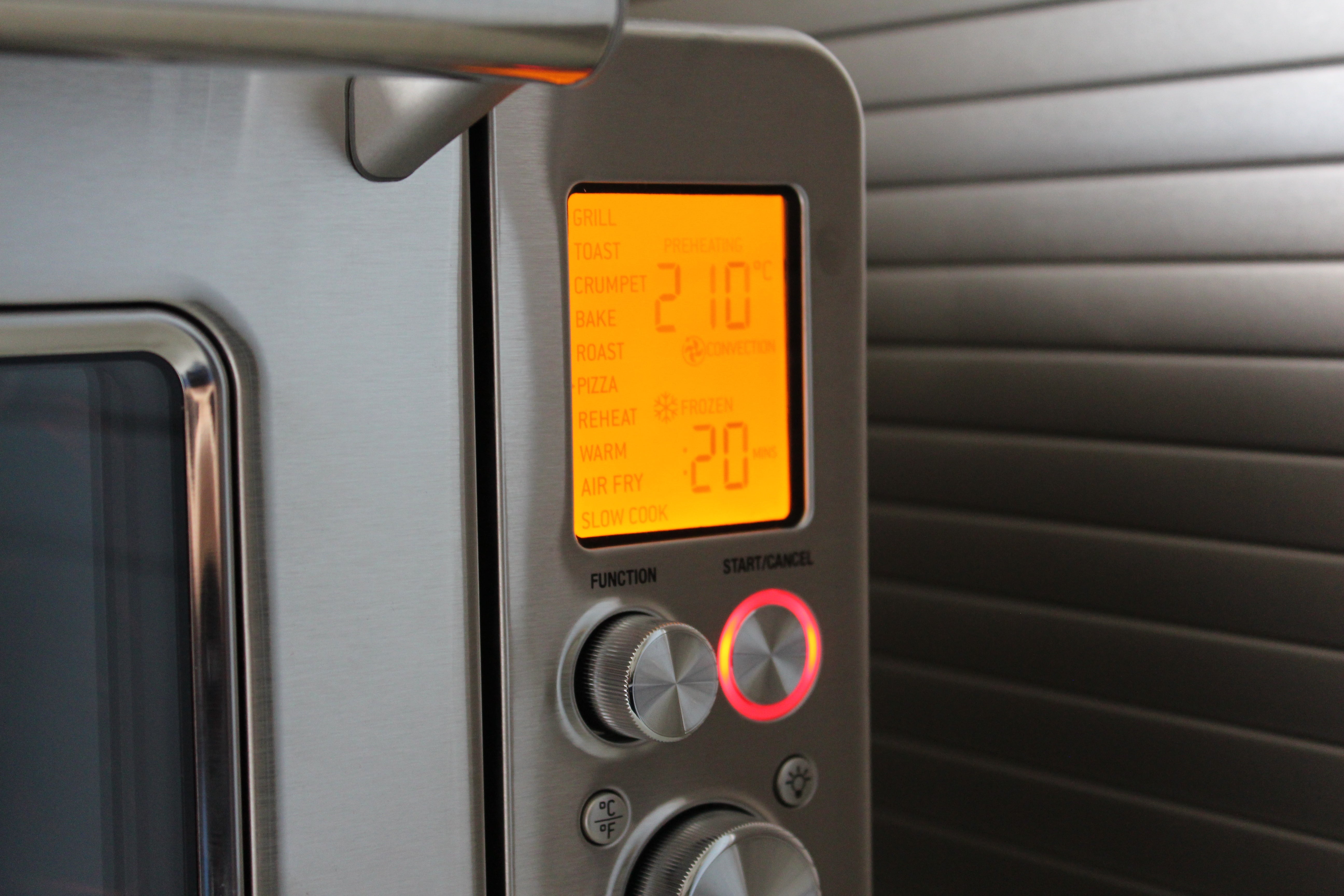 In practice, this works quite well. The chips made using the Air Fry basket emerged golden and mostly crispy after 20 minutes at 220ºC, the potato having only been tossed lightly in oil. One or two of the larger pieces had pale patches, but this could be solved by making sure the chips don’t touch, or by slicing the potatoes more narrowly.

The oven was easy to set and each preset’s time and temperature can be toggled. However, there are a few areas that could be improved. For example, Sage the Smart Oven Air Fry doesn’t heat up as fast as most air fryers, taking up to five minutes from cold to reach a high temperature.

This means you need to factor in preheating to the cooking time, and be around to put food in when it beeps to start the countdown. One advantage it has, though, is a higher maximum temperature than most air fryers – 230ºC instead of an average 200ºC.

Another issue is that the Air Fry basket doesn’t have a tray below it to catch drips. Since most food cooked on this setting will leach fat or juices, having nothing to collect these means they fall onto the pull-out crumb tray. After air-frying chips, the tray was covered in a stubborn layer of sticky oil that couldn’t be easily washed away. None of the removable parts are specified as dishwasher-safe, so clean-up was messy and greasy.

What I did like about the design was a simple yet effective mechanism. Magnets in the door mean that when the oven is opened, it pulls the wire shelf with it, so contents are easier to retrieve. However, this only works when the shelf is in the middle position, which is a shame. Another handy feature is that the shelf positions for different presets are printed on the exterior of the door, so you don’t need to keep the instructions to hand.

Sage usually provides advice on cooking different foods, and often a recipe book, so I was surprised to find only four recipe cards in the box. None of these was for chips, so you’re largely on your own when it comes to working out cooking times and temperatures beyond the 10 presets. 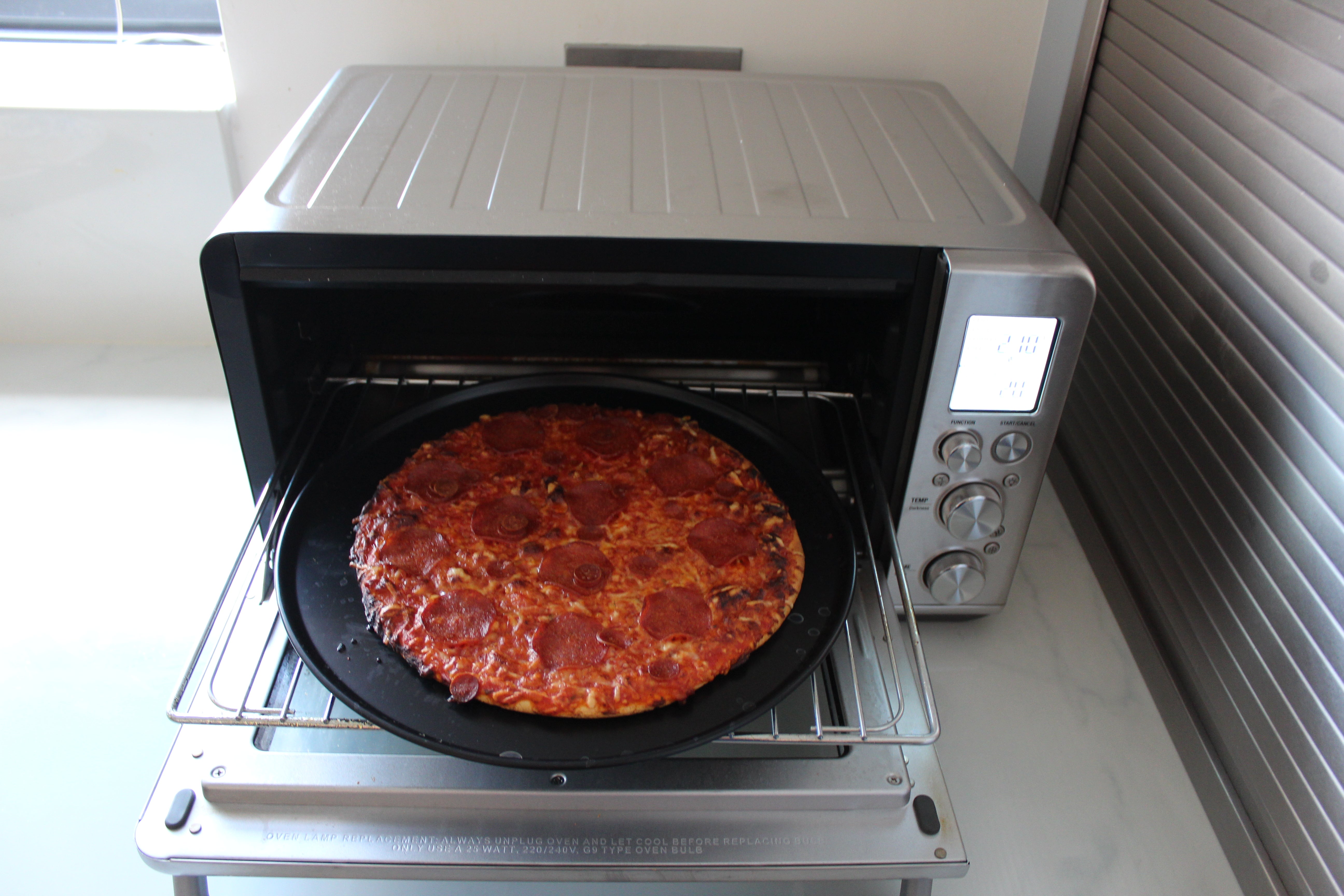 The presets themselves can be handy, although a few are similar. For example, you’ll find Toast and Crumpet (which appear to vary by shelf position), and Bake and Roast, which differ by only 15ºC and duration.

The preset times aren’t always the most suitable – I cooked chicken legs on the Roast setting for 30 minutes, rather than the preset hour, which was sufficient time for crispy skin and thoroughly cooked meat. The Pizza setting using the provided pan was too long for the task.

I baked a frozen pizza in the pan, using the frozen cooking option, for the preset 20 minutes at 210ºC, but found that it began to burn after only 15 minutes.

If you’ll just be using the air fryer function most often, this probably isn’t the right appliance for you – compared to upright models, it’s bulky, needs more cleaning and has a much higher price than most. That said, it’s great for families, entertaining and batch cookers who never have enough oven space.

It’s likely that you’ll have to test and adjust the presets, and either find a good grease cleaner or risk sticking parts in the dishwasher, but the Smart Oven Air Fry’s generous capacity, flexibility and all-round usefulness should be a good enough reason to make space for it in your kitchen. However, you might want to check out the Ninja Foodi Multi-Cooker or one of our top air fryers if versatility is the main thing that you need.