It's a little large for those with a smaller kitchen, but coming with two lids the Ninja Foodi Multi-Cooker is a hugely versatile kitchen appliance that can act as a pressure cooker, grill and air fryer. If you're thinking about buying just one of these appliances, the Foodi could be a convenient choice.


What is the Ninja Foodi Multi-Cooker?

Combining the speed of pressure-cooking with the ability to crisp, grill and bake, the Ninja Foodi Multi-Cooker can do everything from roast a whole chicken to golden brown perfection, to producing up to 1.1kg of French fries – tasks beyond the average multi-cooker.

It works by using two different lids: a pressure-cooking one for when you need dinner quickly, and an attached lid for when you want to air fry for up to 75% less fat. Whether you’re feeling virtuous and fancy healthy vegetable crisps or grilled chicken, or are craving comfort food such as slow-cooked pulled pork or fish and chips, the Foodi Multi-Cooker delivers.

Foodi is a two-lid cooker that’s big and heavy, so be aware that you’ll need sufficient worktop or cupboard space  to store it. There are three basic ways to use it – with the separate lid in place for pressure-cooking (plus steaming, slow cooking and sear/sautéing); with the attached crisping lid for air crisping (plus baking/roasting and grilling); or without a lid for sear/sautéing.

Inside, there’s a removable cooking pot for use on its own or with either the Cook & Crisp basket or reversible grilling rack. 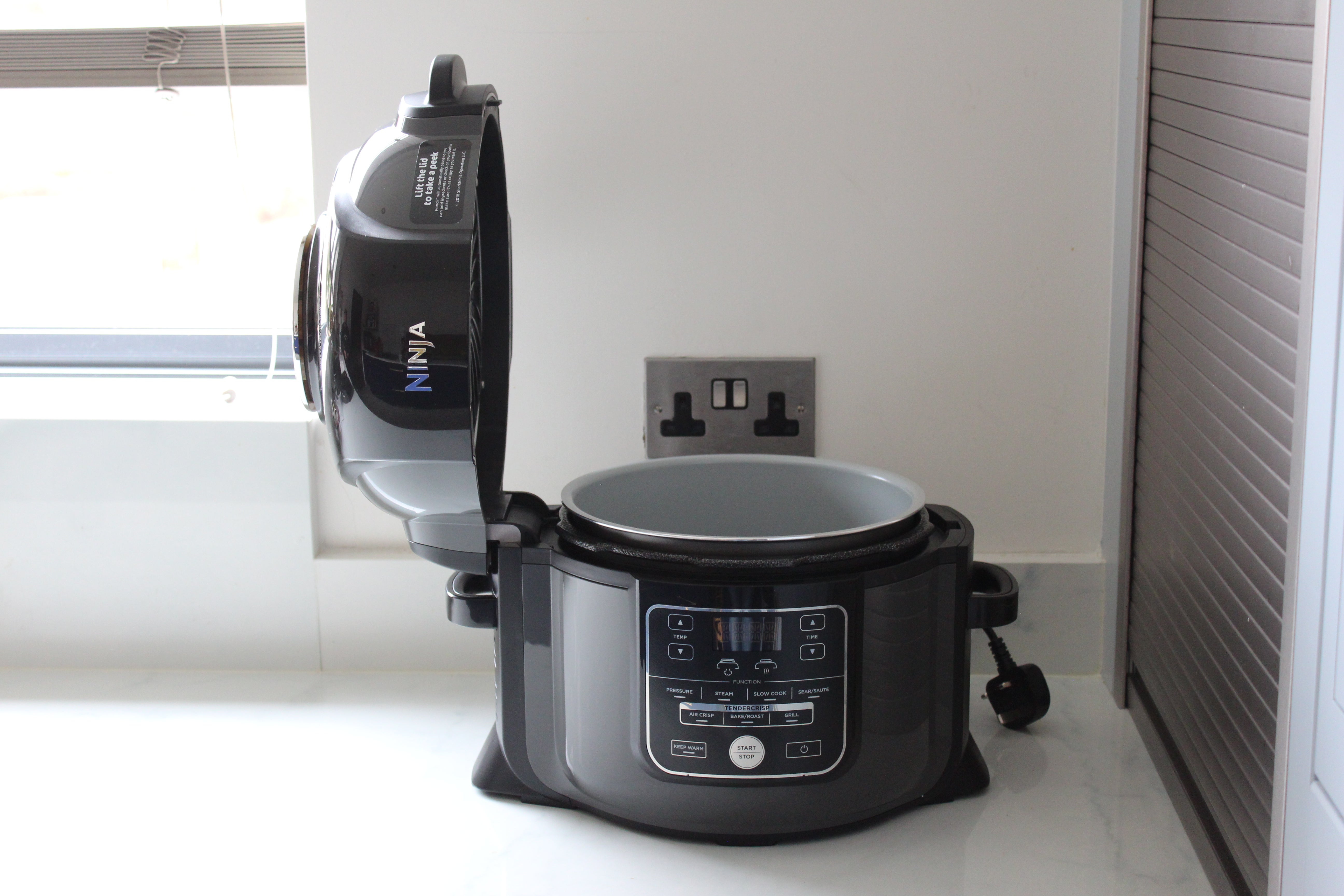 The slow and pressure-cooking part works much like other cookers, with a choice of high or low heat or pressure. Air crisping, baking and roasting offer adjustable temperature, while there’s just one heat for grilling.

All of the cooking times can be set in minutes, plus there’s a handy pause function when you open the crisping lid, so you can peek inside to check on progress. 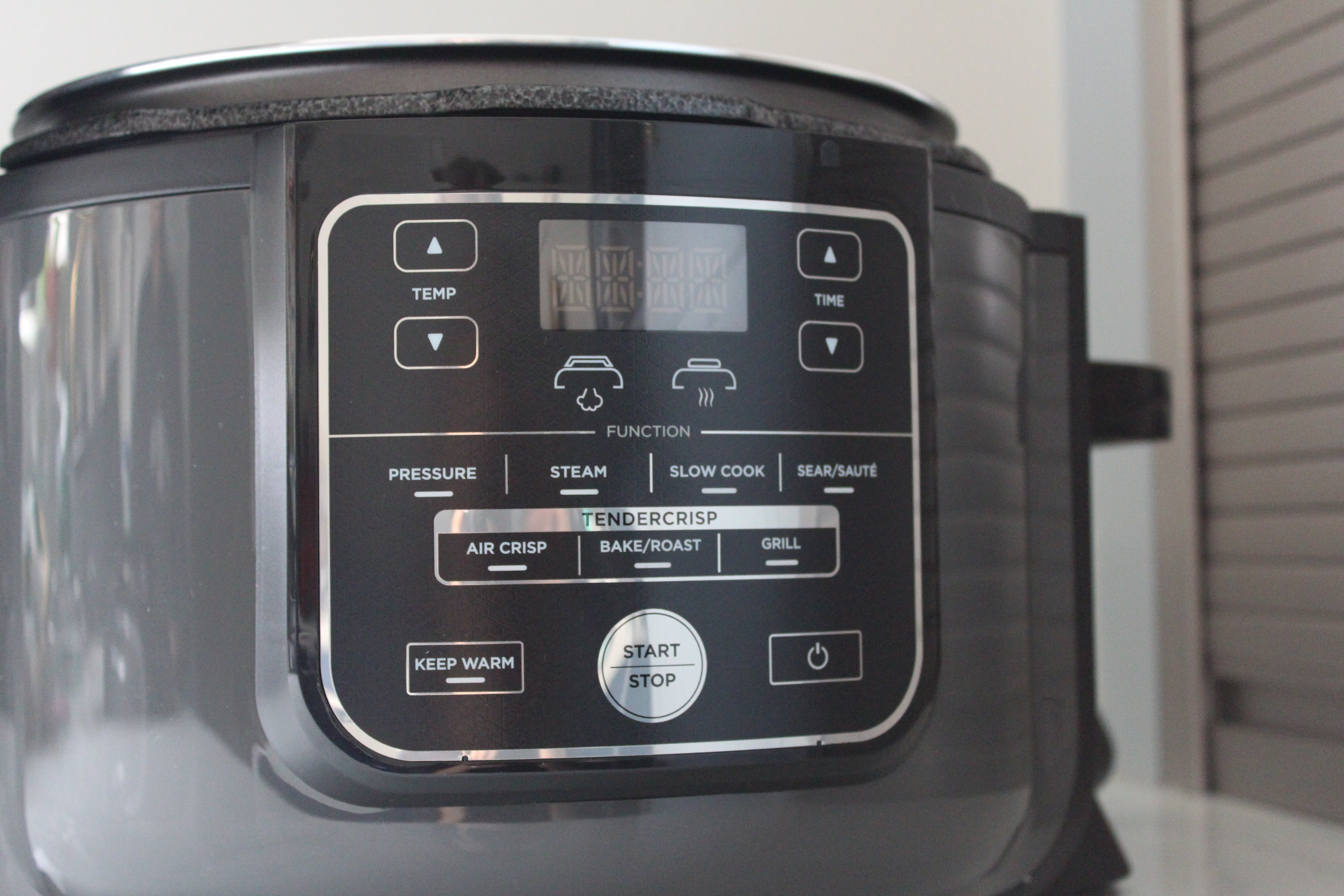 The idea behind the Ninja Foodi Multi-Cooker isn’t just that it’s both a pressure cooker and an air fryer; it’s more that you combine both for great food, fast. So it’s no surprise that the included booklet includes recipes that harness more than one method of cooking, such a pressure-cooked cottage pie with a grilled potato topping. A “cheat sheet” chart is also on hand for cooking everyday foods.

I started by making teriyaki chicken with rice and broccoli. After placing rice, frozen veg and stock into the pot, I set the grilling rack with chicken above it and closed the lid. 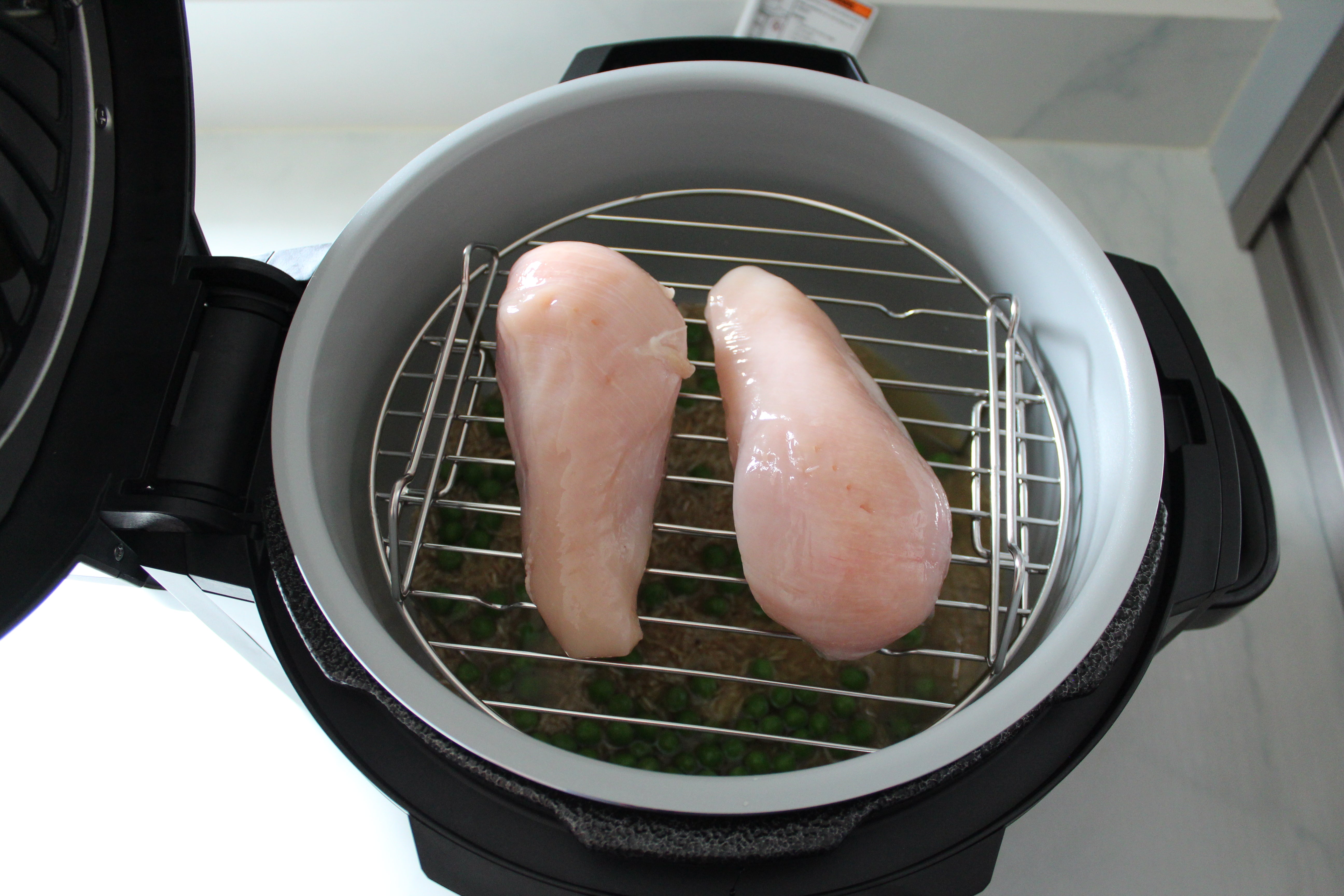 This was set for two minutes on high pressure. However, it took an additional five minutes for pressure to be reached, before the timer started to count down. There’s a red float button that raises up as pressure is reached to provide an idea of how close it is to starting to cook.

Once finished, another 10 minutes was required to release the pressure naturally (Foodi helpfully counts up after cooking), meaning that a two-minute cooking time actually took 17 minutes. Removing the pressure lid and adding broccoli to the rack, I then used the crisping lid to grill the chicken and veg. 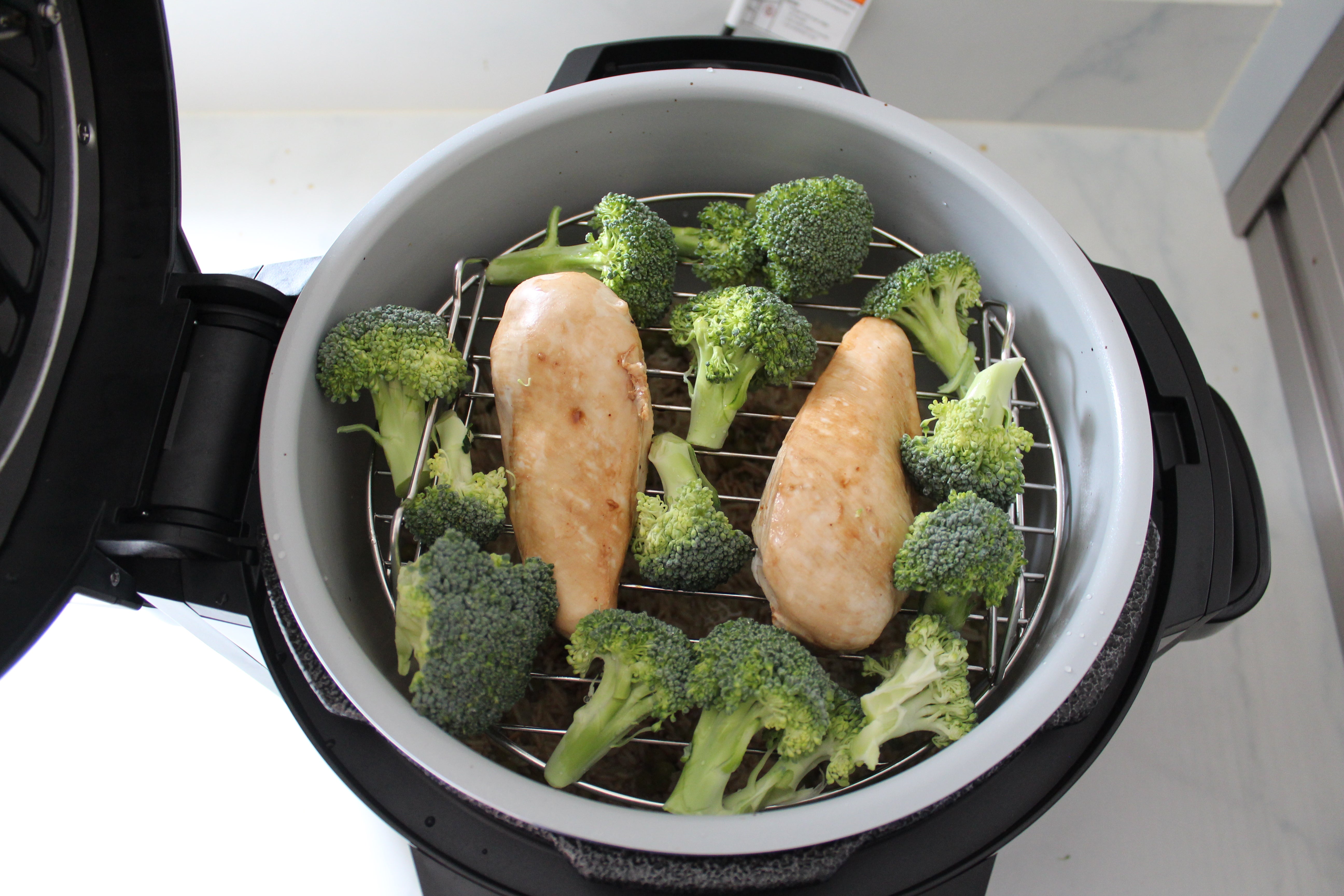 The heat was quite fierce and singed the broccoli before it was cooked through. An option of a low grill, rather than a single heat, would have been handy. I also found that the rice was undercooked, and would have benefitted from a longer cooking time. However, the chicken was crispy and moist. Next, I put potato wedges into the crisping basket, starting off by pressure-cooking on low for three minutes with a quick release, which took the time to about 7 minutes. The potato emerged cooked and fluffy, although any smaller pieces were a little mushy. This made tossing them in oil quite tricky. This was followed by engaging the Air Crisp setting at 200ºC, checking the wedges after 15 minutes of cooking. Since the temperature was high, I moved the crispier wedges on top to the bottom of the basket, as the ones below weren’t browning as well. Following a further five minutes of cooking time, the wedges were nicely crisp yet still soft inside. Finally, I cooked a whole roast chicken. Placing the chicken in the crisping basket, I pressure-cooked it for 22 minutes on high, with a five-minute natural pressure release. The chicken still had patches of pink flesh. After brushing with oil and lowering the crisping lid, I browned it at 200ºC for eight minutes. However, this wasn’t sufficient to turn the skin golden. I added a further 10 minutes at the same temperature, which browned the chicken to the colour you’d expect from conventional roasting. Following a period of resting, the meat was tender and cooked through. I’d estimate this process took just over half the time of roasting a chicken in an oven. 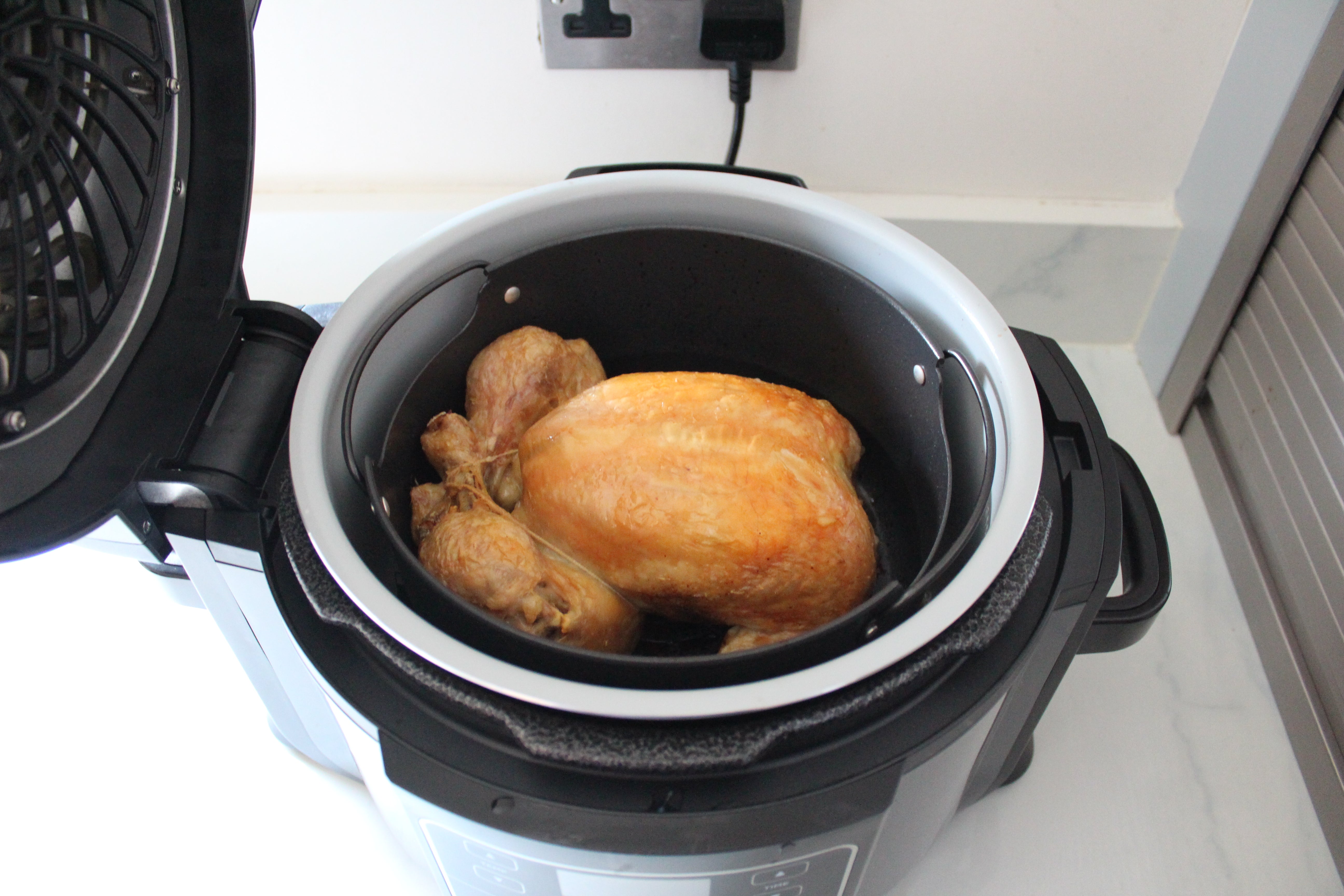 Clean-up was simple – every accessory, including the bowl, is dishwasher-safe – but equally straightforward to wash by hand.

Why buy the Ninja Foodi Multi-Cooker?

Solo households or small kitchens may find that the Ninja Foodi Multi-Cooker’s size outweighs its benefits. Nevertheless, it’s ideal for families, batch-cooking for the week ahead or entertaining. It works especially well for roasting and grilling meat, and frying potatoes, although cooking times may need to be tweaked for other foods.

Where it comes into its own, though, is if you’re already considering a pressure cooker or an air fryer. Since the Ninja Foodi can be both of these and more, it offers excellent value for the price.