What is the Sage Control Grip All In One?

The Sage Control Grip All In One is a hand blender that thinks it’s a food processor. It has lots of attachments and sits on a base that’s handy for storage.

It’s very pricey but it does more than other hand blenders. 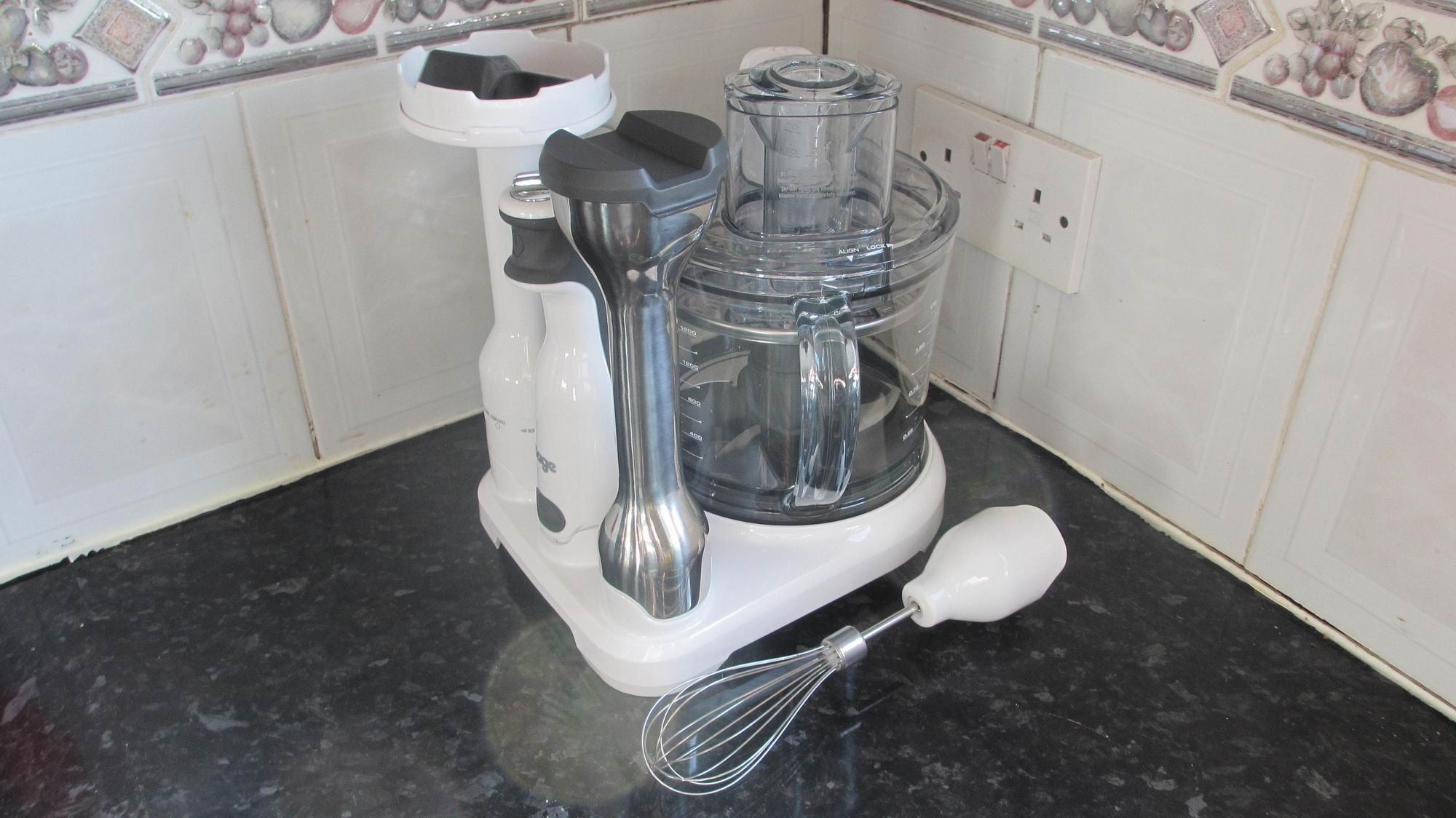 Sage Control Grip All In One – Design and features

The Sage comes on a base that stores all the attachments. You can even set the base on a worktop and use the food processor attachment while the jug’s still on it.

Most blenders with a chopper only have a small container and small blades but this is as big as a food processor, with a 1.6 litre jug and a feed tube. It comes with large blades, a grating disc and a slicing disc. The latter is hidden under the jug and was a pleasant surprise when we found it. 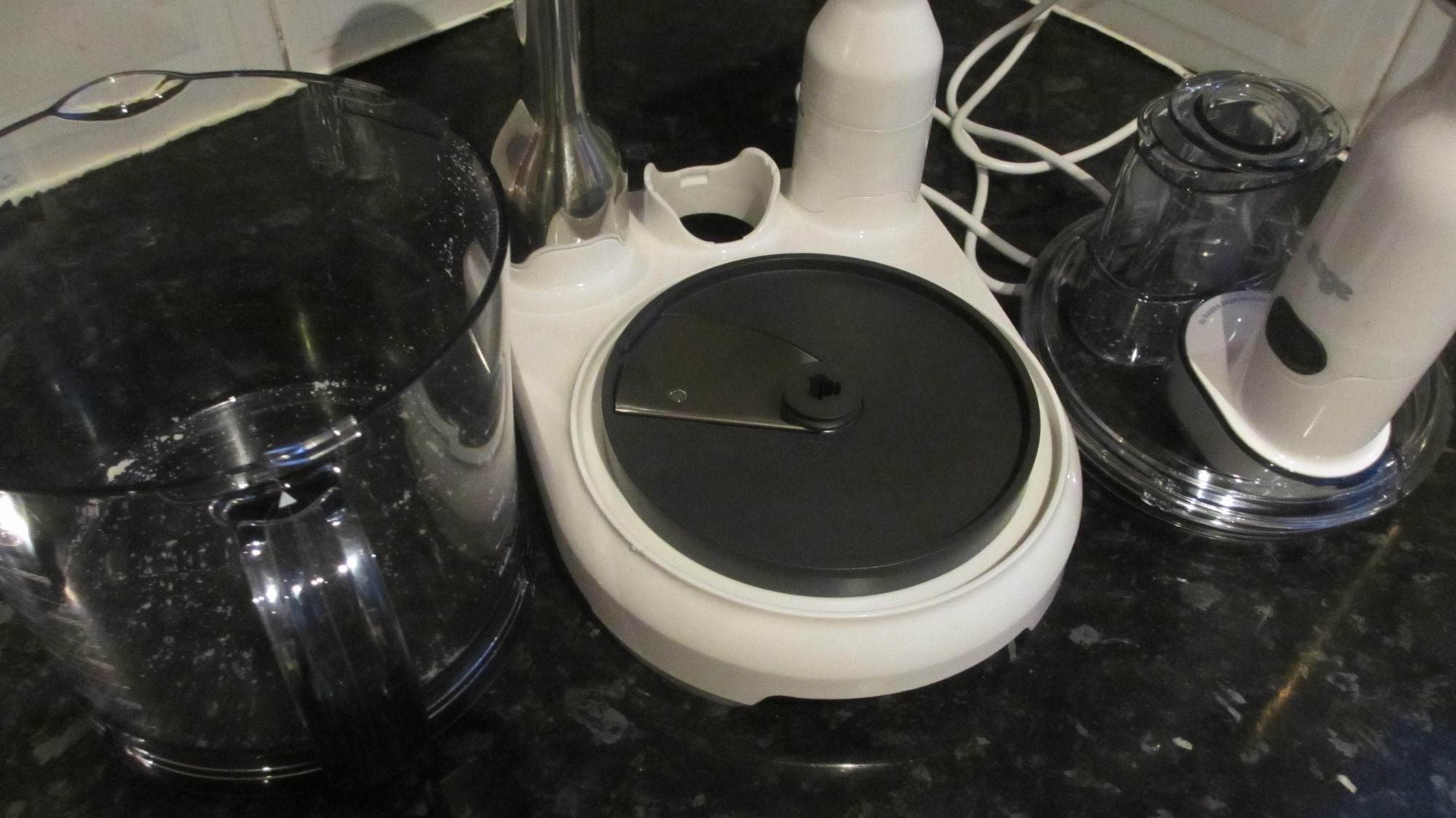 Beside it on the base are spaces to store the blender body and two more attachments. Which is a bit annoying considering it comes with three. These are a stainless steel whisk, a plastic masher and a stainless steel blending foot. The blender has a handsome polished finish and a plastic tip so it won’t scratch non-stick pans. It has two flat blades.

The blender body is a mix of white plastic and grippy grey rubber. The button falls naturally under your index finger and then there’s a silver knob on top to adjust speed, from 1 to 15. 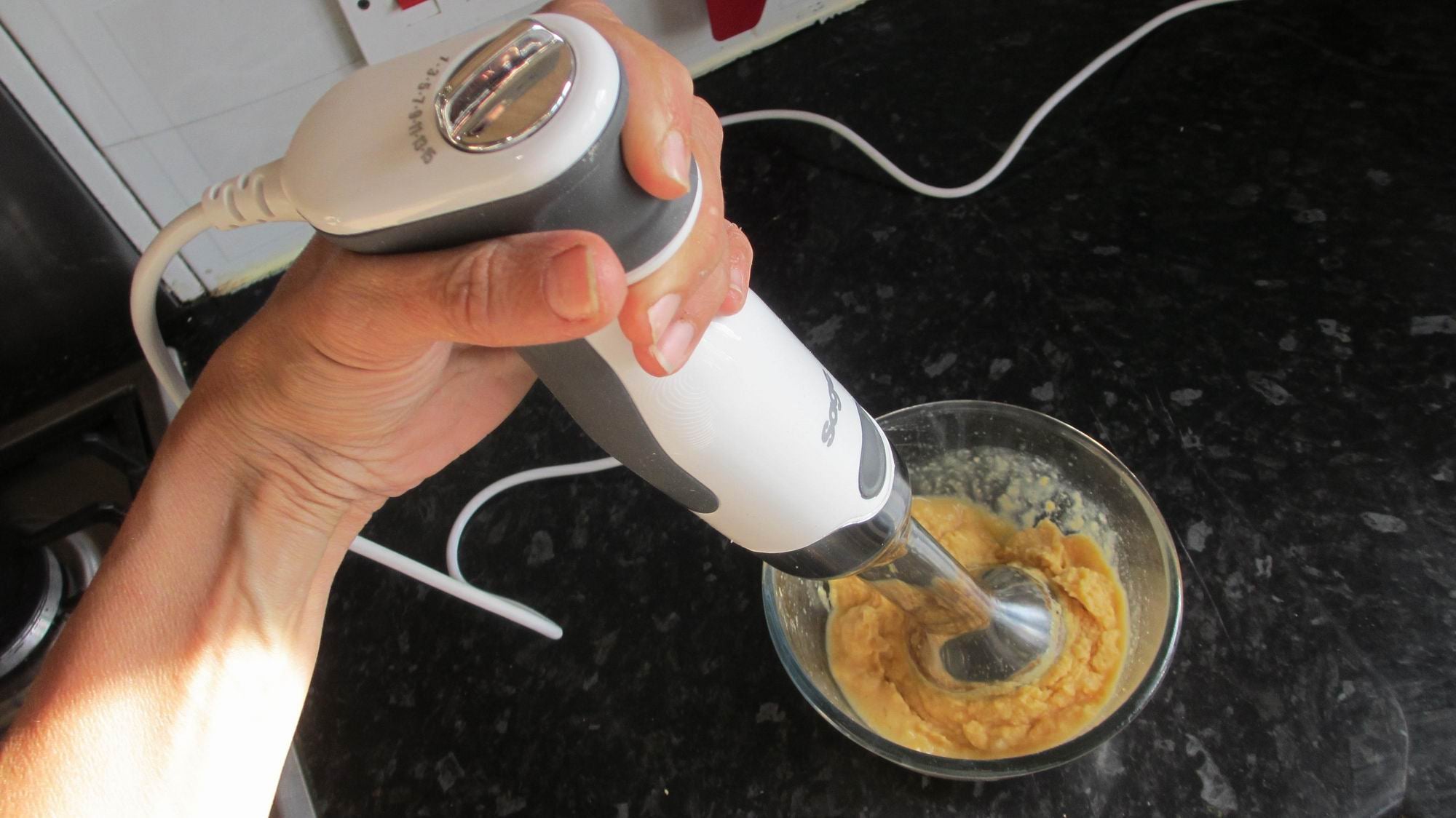 Sage Control Grip All In One – What’s it like to use?

The food processor really is a different beast to the small choppers that come with other blenders. Mostly in a good way but, for example, when we put in a small piece of parmesan it was just impaled on the blade. It’s not designed for small stuff. But it’s great at big stuff, with a large capacity and discs that are good for grating and slicing large quantities.

The slicing disc, hidden under the jug, is extra impressive. The thickness is adjustable like a mandolin, with 18 thicknesses, from 0.5mm to 6mm. You can cut crisps with it. 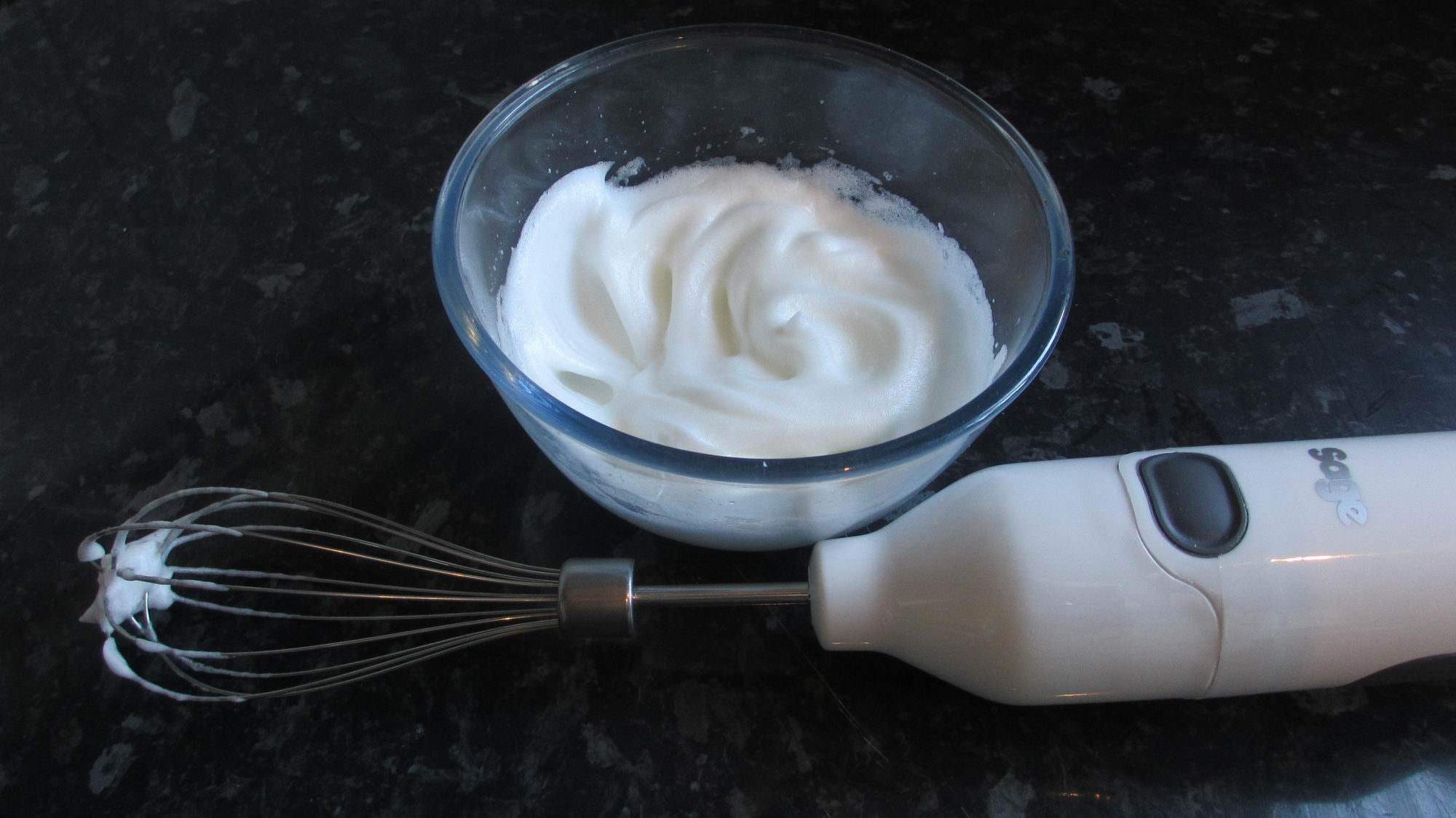 The Sage is also impressive as a blender. The variable speed meant it was easy to start slow when blending onion soup. The results were very smooth and creamy. While the top speed of 15 was great for blitzing chickpeas to make hummus.

It was also the best on test at whisking egg whites: impressive firm peaks in seconds. 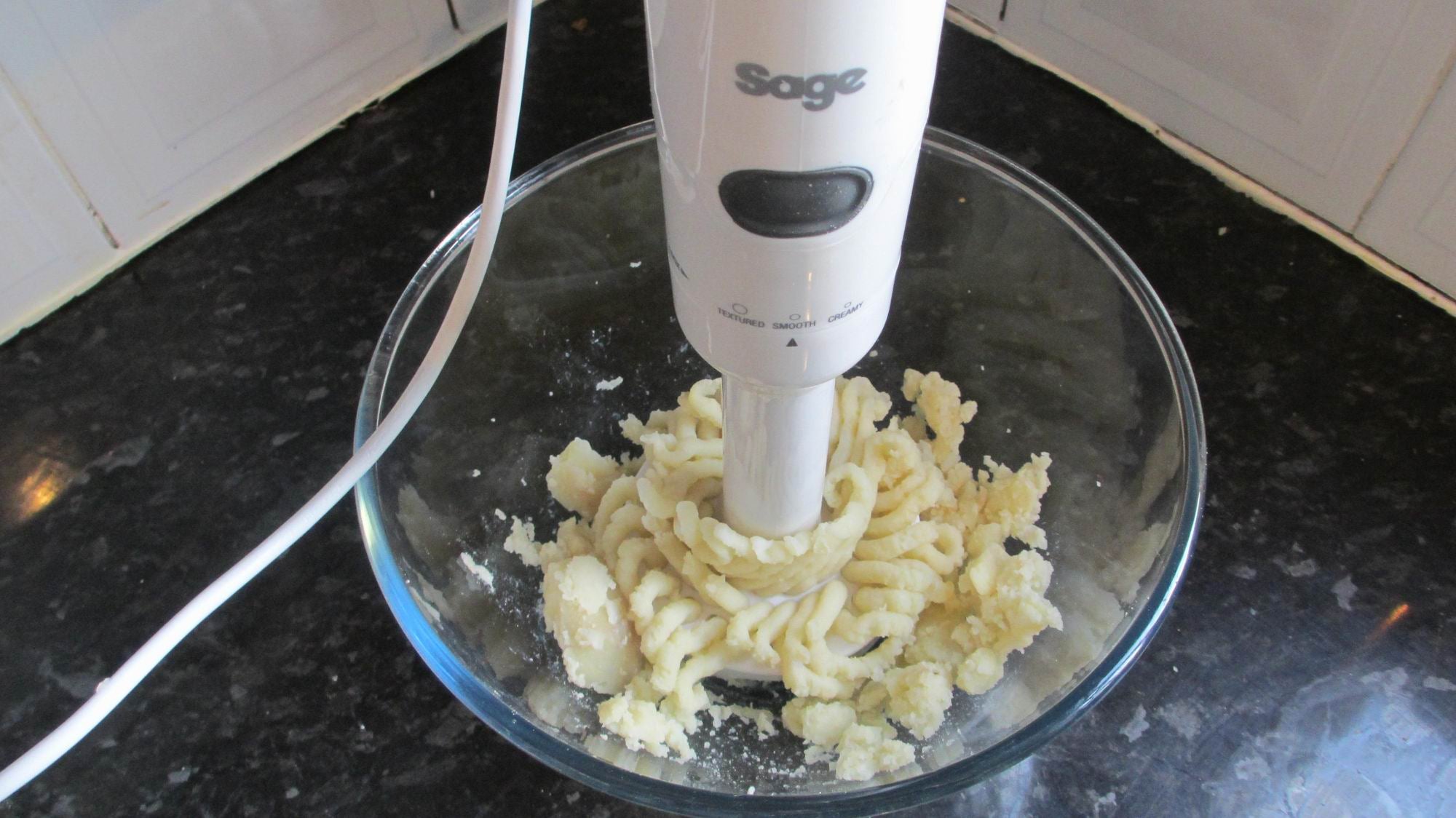 The masher is clever. Like the Kenwood HDP406WH, this works like a potato ricer, but the Sage’s is better because you can adjust the size of the holes. It’s like having three different ricer discs. The results are even better and smoother than the Kenwood. But we’re still not convinced that there’s a need for it.

Cleaning the blender is a doddle: just blending a bit of soapy water gets it completely clean. The masher is much harder work, especially if dirt is dried on, but you can unscrew the blade to clean it completely. 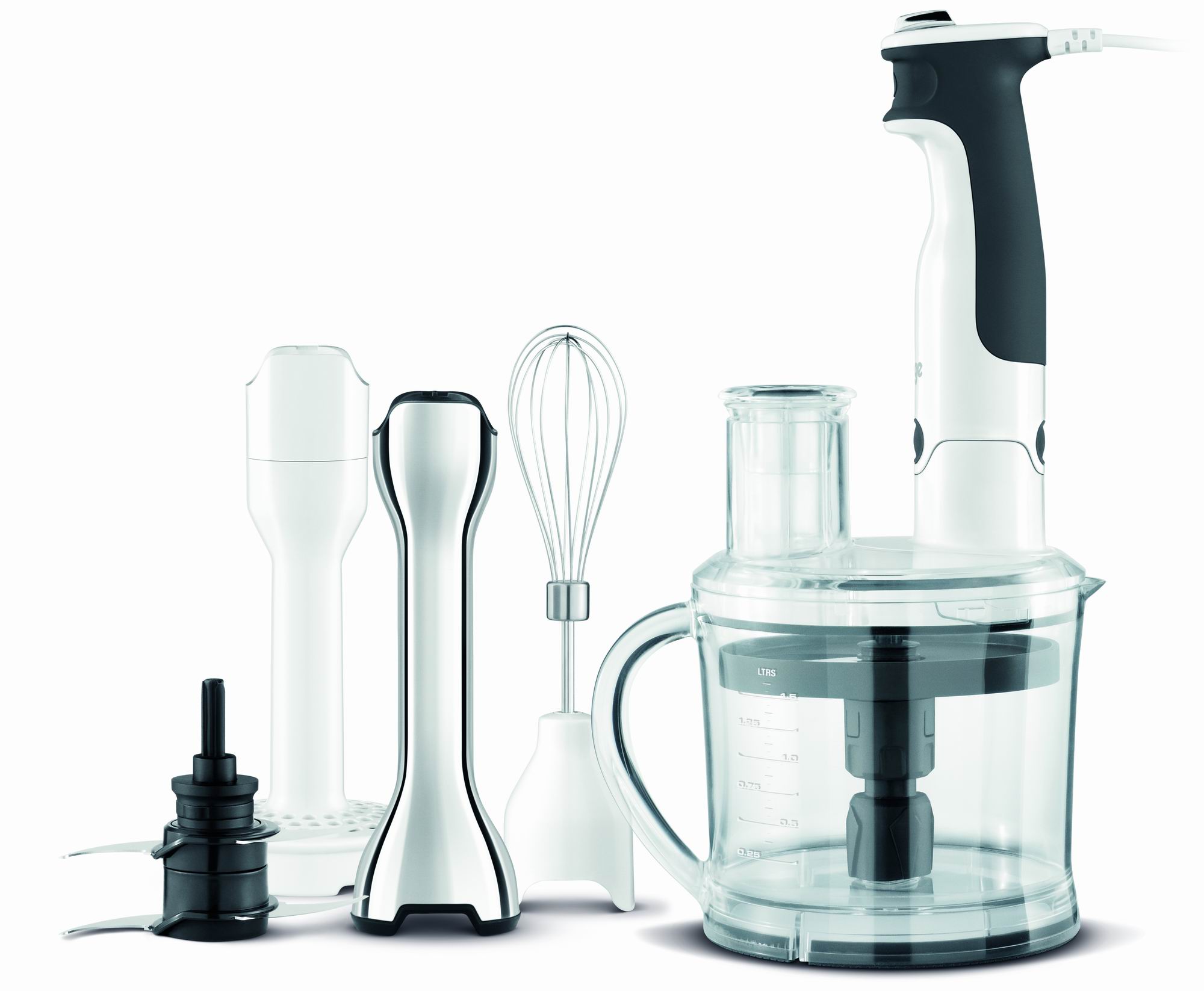 Should I buy the Sage Control Grip All In One?

Maybe. It’s very pricey, but if you want a blender and a food processor then the Sage is great at both jobs. And although it takes up a fair bit of cupboard space, it stores neatly on its base, so it’s not cumbersome.

There are lots of cheaper alternatives. Our Editor’s Choice is the affordable Braun MQ3025. The foodie Tefal Infiny Force is well worth a look too.

An impressive, but pricey, hand blender and food processor combo.