What is the Tefal Infiny Force?

The Tefal Infiny Force hand blender comes with good attachments for foodies. If you’ve ever fancied making your own mayonnaise, this is the blender for you.

We found it powerful, easy to use and great for mayo. But it is a bit pricey. 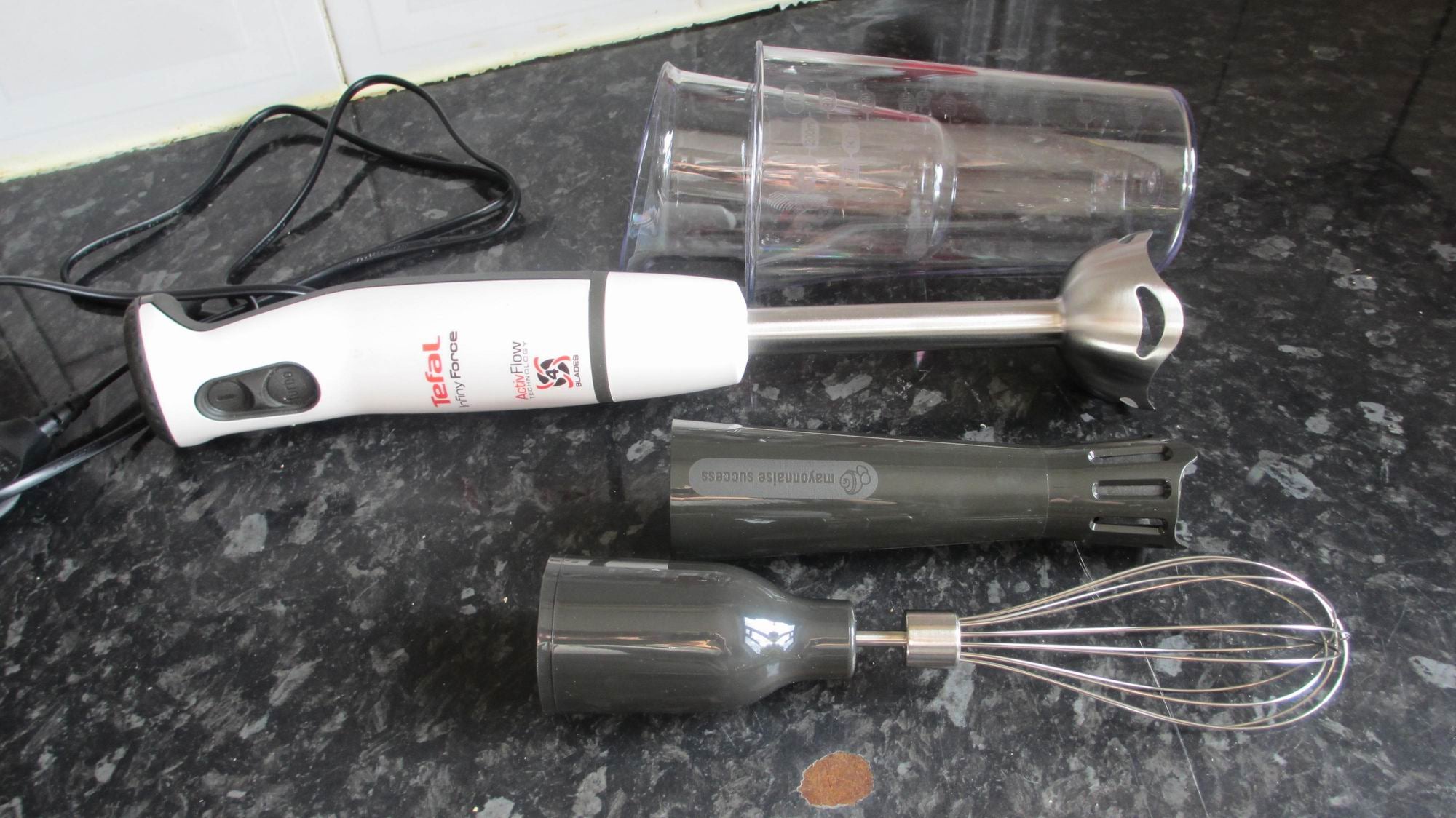 The Tefal is shaped to sit nicely in the hand, with your index finger falling naturally on the go button and middle finger on turbo. But it’s not a two-speed blender, it’s variable thanks to a dial on the top. The numbers range from 0 to 20 but you can position it anywhere in between. Turbo gives you a burst of extra power without the need to turn the dial.

The blender’s body is half gloss white plastic, half rubberised black that’s good to grip. The buttons and dial are easy to use too: rubberised and textured so even slippery hands are fine. There’s no loop to hang the blender from though. Attachments are easy to swap: they screw onto the body. 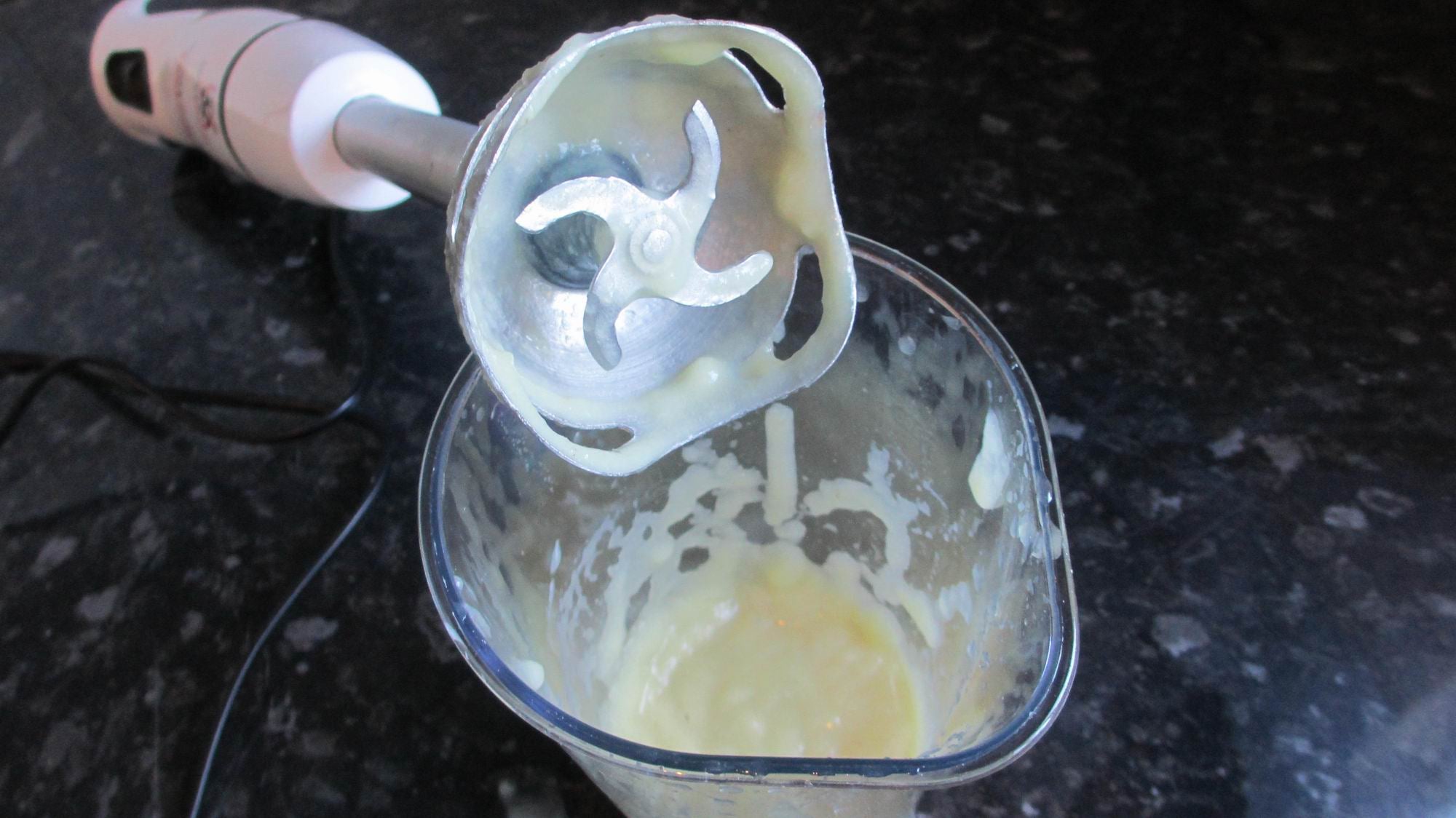 It comes with three attachments. The blending foot is stainless steel (more heat- and stain-resistant than plastic) and has four blades: two flat, one that bends upwards and one that bends downwards. The foot is curved with good, big slits in it to help food move. For blending it comes with an 800ml jug with spout, graduated in millilitres and fluid ounces.

It also comes with a metal whisk and an unusual sauce foot designed specifically for making stuff like mayonnaise, plus a recipe book and a small jug just for sauces.

Storage-wise, it’s possible to fit the two jugs inside each other and pop all three attachments in them. It’s a little clumsy but it beats blenders that have so many attachments that they take up half a cupboard. 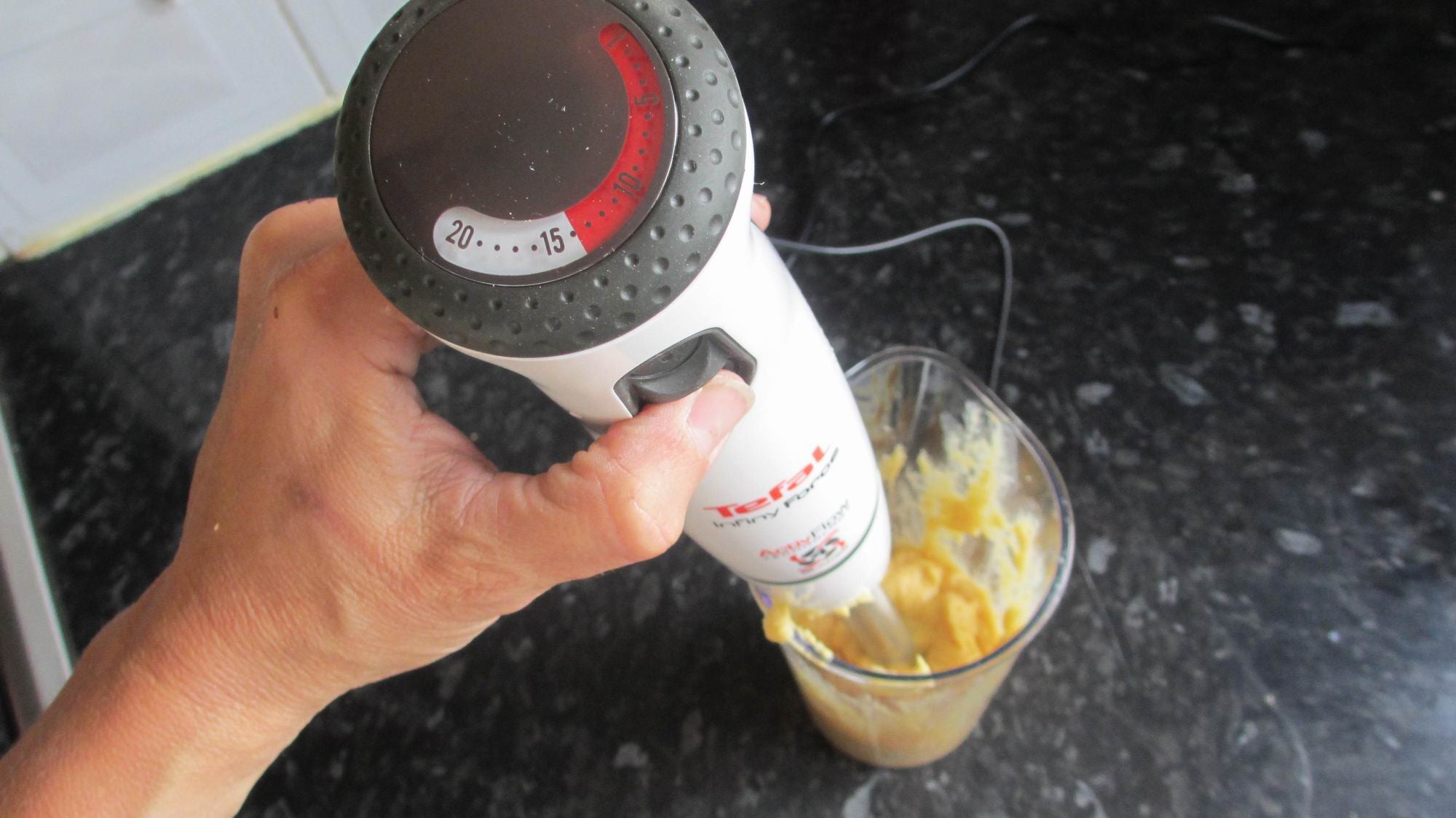 The blending foot did a great job on our onion soup. We found the speed easy to adjust thanks to the dial on top. Start slow so you don’t make a mess, then speed up to ensure smoothness. There were no suction problems, no splashing and the soup was velvet smooth. The grip feels comfortable and would be fine even for small hands. 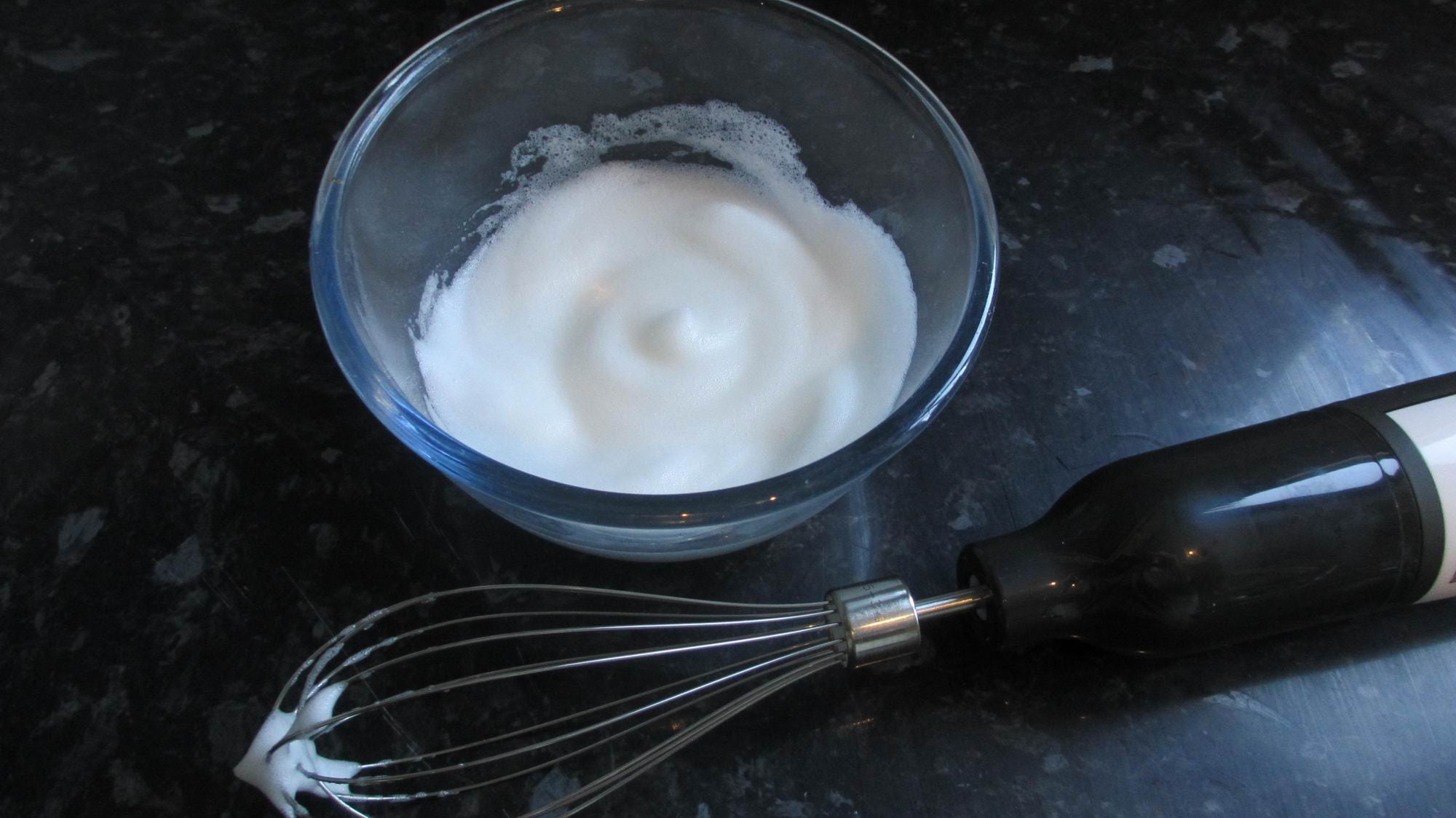 Blitzing chickpeas for hummus was also a success. The Tefal is powerful and gave a good, creamy texture. It’s well balanced in the hand too, but this time there was a lot of suction because the mix was gloopier than soup, so you need to hold the jug steady with one hand while moving the blender up and down with the other.

The whisk worked well. We used the top speed of 20 and whisked egg whites for just over a minute. The results were good, but not quite as good at those from the Braun MQ3025. 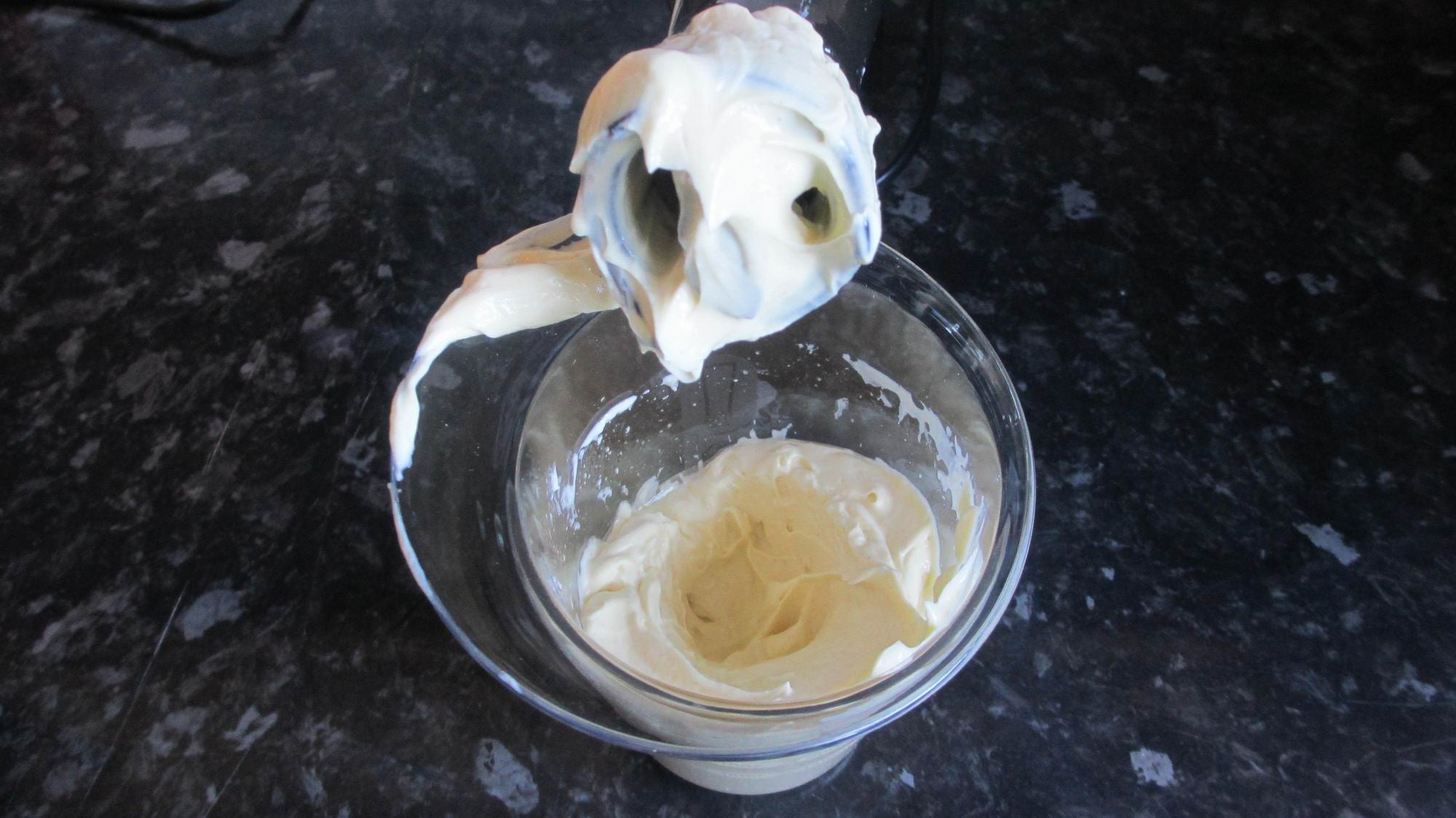 Last but not least: mayonnaise. Again something the Braun did well. This time the Tefal’s results were even better, thanks to its special sauce foot. It only took 20 seconds to emulsify egg yolk, oil, mustard and vinegar into a rich, tasty mayo. But beware trying to wash it as you would the blender foot, by using it in soapy water. It’s tiny and very powerful, so water went everywhere. Lesson learned.

Cleaning the blender was good, not great. The end has good, large slits that clean easily but four blades means chickpeas can get stuck above them. 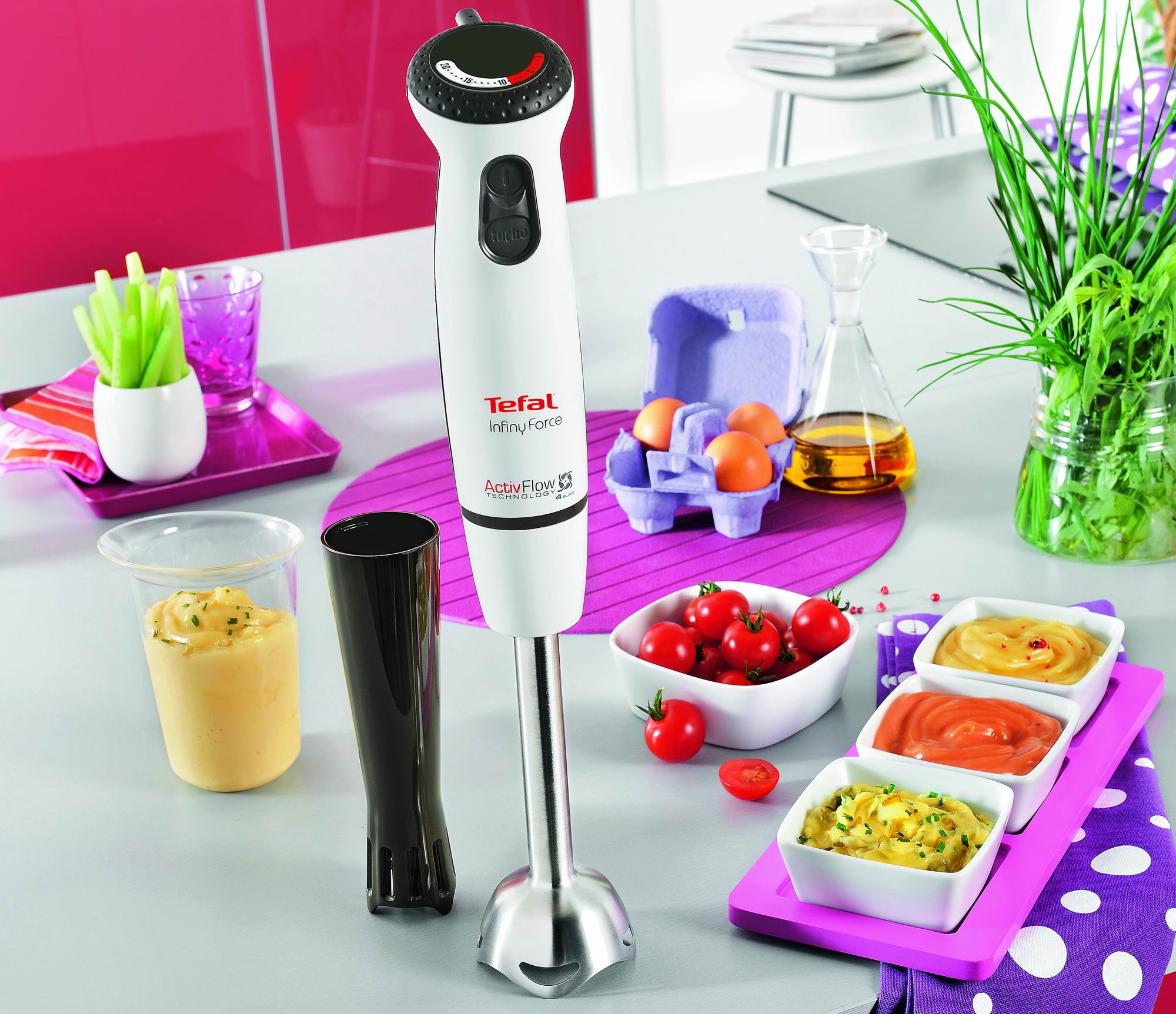 Should I buy the Tefal Infiny Force?

Yes. Unless you’re on a budget then this is a good, power hand blender and the sauce foot is superb. It even packs away to be pretty small.

Make mayo like a pro and much more with this foodie hand blender.