If you’re going to get fairly equal use out of a blender and a juicer, the Sage 3X Bluicer Pro is a smart buy. It doesn’t lack power or capacity for either need and is pleasingly robust. While its citrus juicing left something to be desired, and there are still fairly large parts to store, if you’re looking for a good all-rounder blender with the option of tasty fresh juice, this sleek appliance will be at home on your worktop.

Finding space for a one-function appliance, such as a juicer, in the average-sized kitchen is a challenge, which is why the Sage 3X Bluicer Pro makes a lot of sense, its base playing host to either a blender jug and full-sized juicing bowl with a generous pulp container.

For the five-a-day fans, it’s a huge advantage – meaning you can juice one day, have a smoothie the next, and whip up a batch of fruity frozen cocktails at the end of the week. Plus its five blending programmes provide convenient walk-away functionality, alongside 10 speeds for both blending and juicing. A final design twist is that the blender jug doubles up as the juicing carafe, minimising the amount of kit two separate appliances would bring.

Considering that you can spend £200-300 on a durable centrifugal juicer, the idea of merging one with a blender for a little more fills a gap. It’s not the first appliance to attempt to combine the two but the Bluicer Pro does it without too much compromise. For starters, its blending doesn’t lack clout – the triple angled serrated blades combined with a pair of flat angled blades are incredibly efficient, while the design of the jug helps to draw ingredients down towards its bowl-style bottom.

Dedicated programmes for blending come in handy – the green smoothie function being a mix of high power and two bursts of low speed. The green smoothie I made had no traces of spinach leaves, pear grit or fibres after 1 min 4 seconds. This programme was noisy but it got the job done. 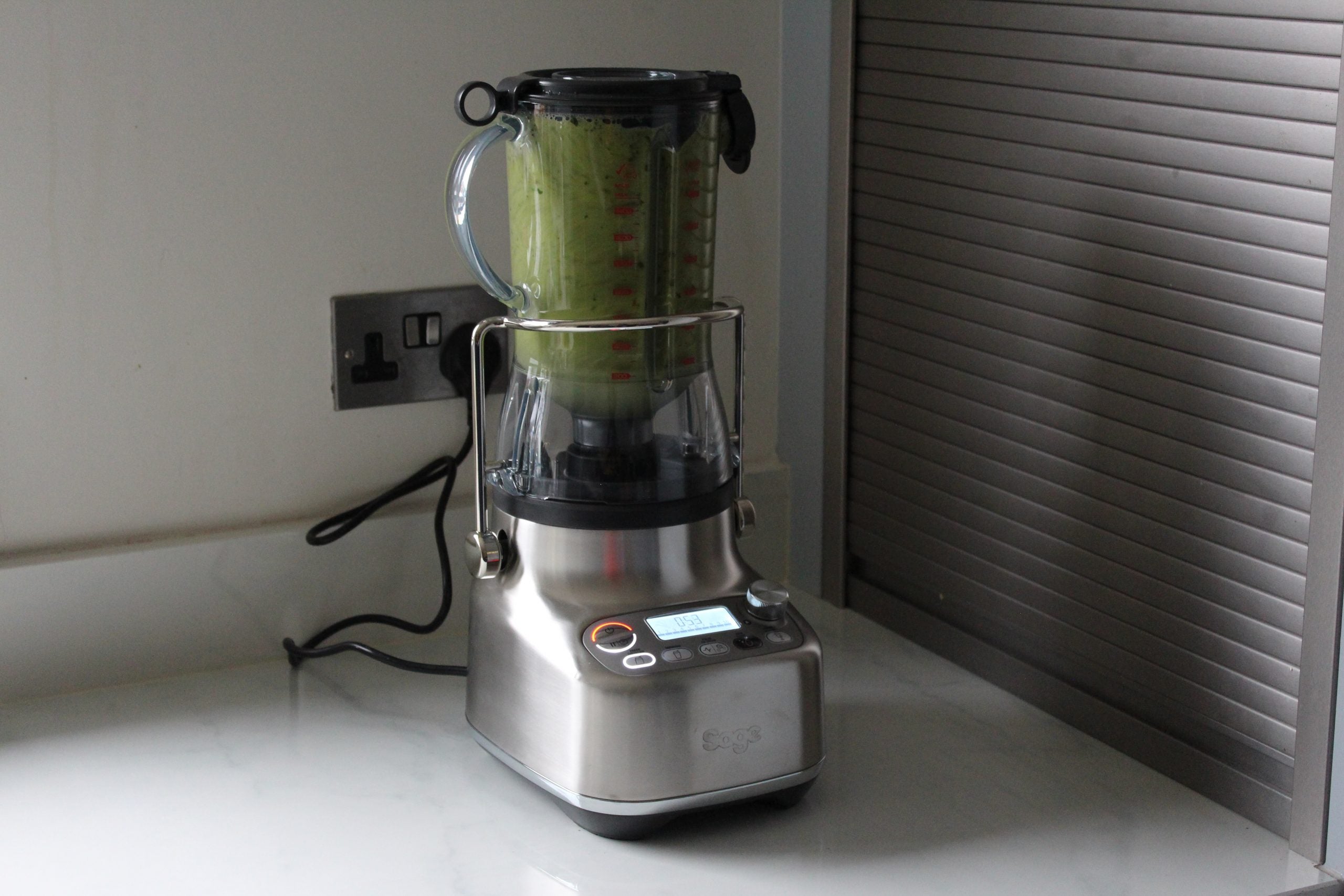 Where blending did come unstuck was pouring the smoothie out afterwards. The spout of the jug mimics that of a juicing carafe by being a round protrusion rather than a lip, allowing it to fit onto the juicing bowl to receive liquid. However, it works less well when pouring a thick mixture – leave the lid on, and smoothie has a habit of leaking out of the air holes within the lid. Take the lid off and smoothie can flow over the top of the jug if you tip it at the wrong angle or try to pour too quickly. There’s also the potential for error when blending. The first time I attempted it, I hadn’t securely fixed the cap over the spout, allowing smoothie to be blasted out and down the side of the machine.

There are four other blender programmes, although one is an auto clean. 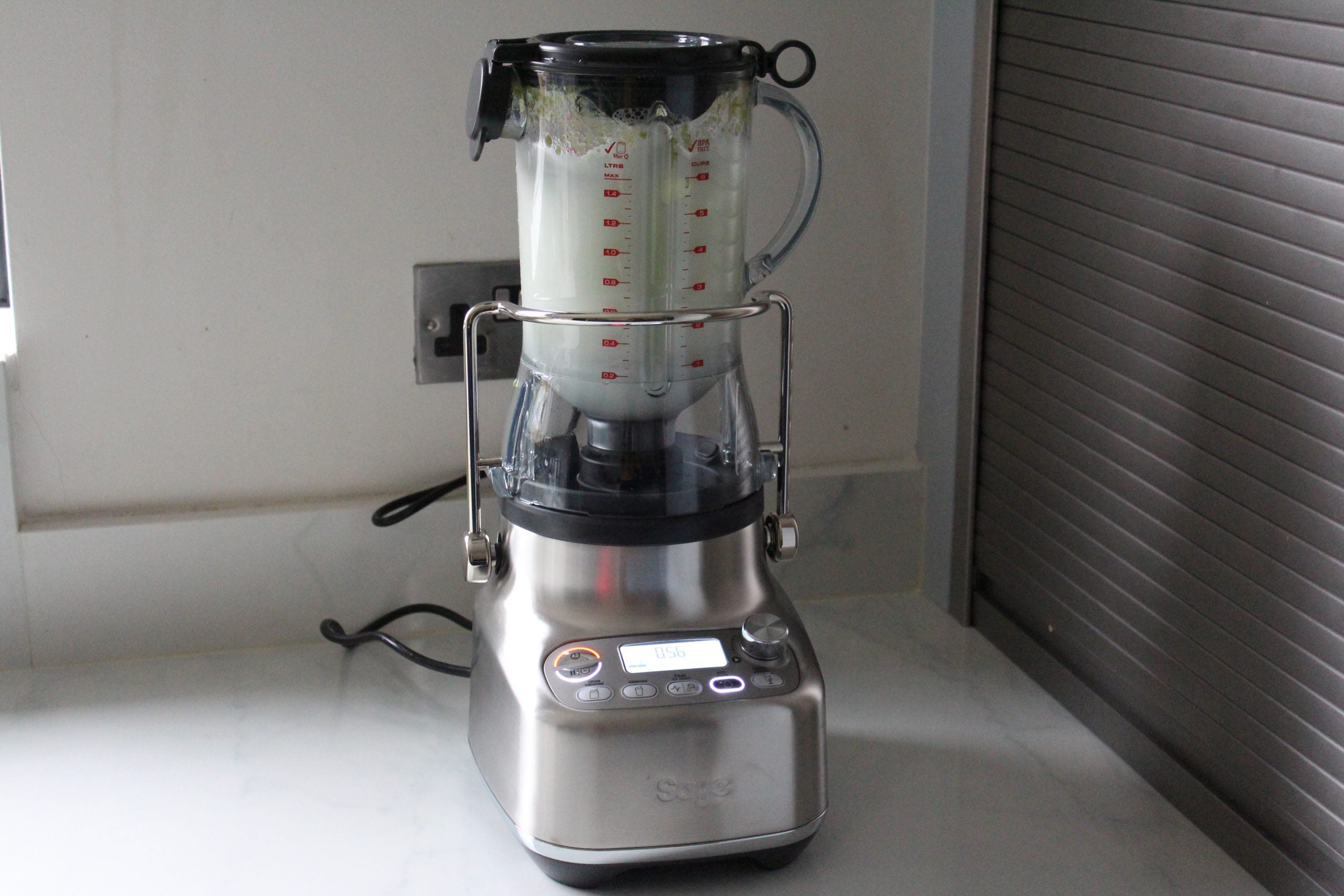 This used slow and fast blending with pulses for around a minute to thoroughly clean out the jug. I found it to be one of the most efficient auto clean programmes I’ve ever used, mainly because the warm water and washing up liquid even found its way into the lid. 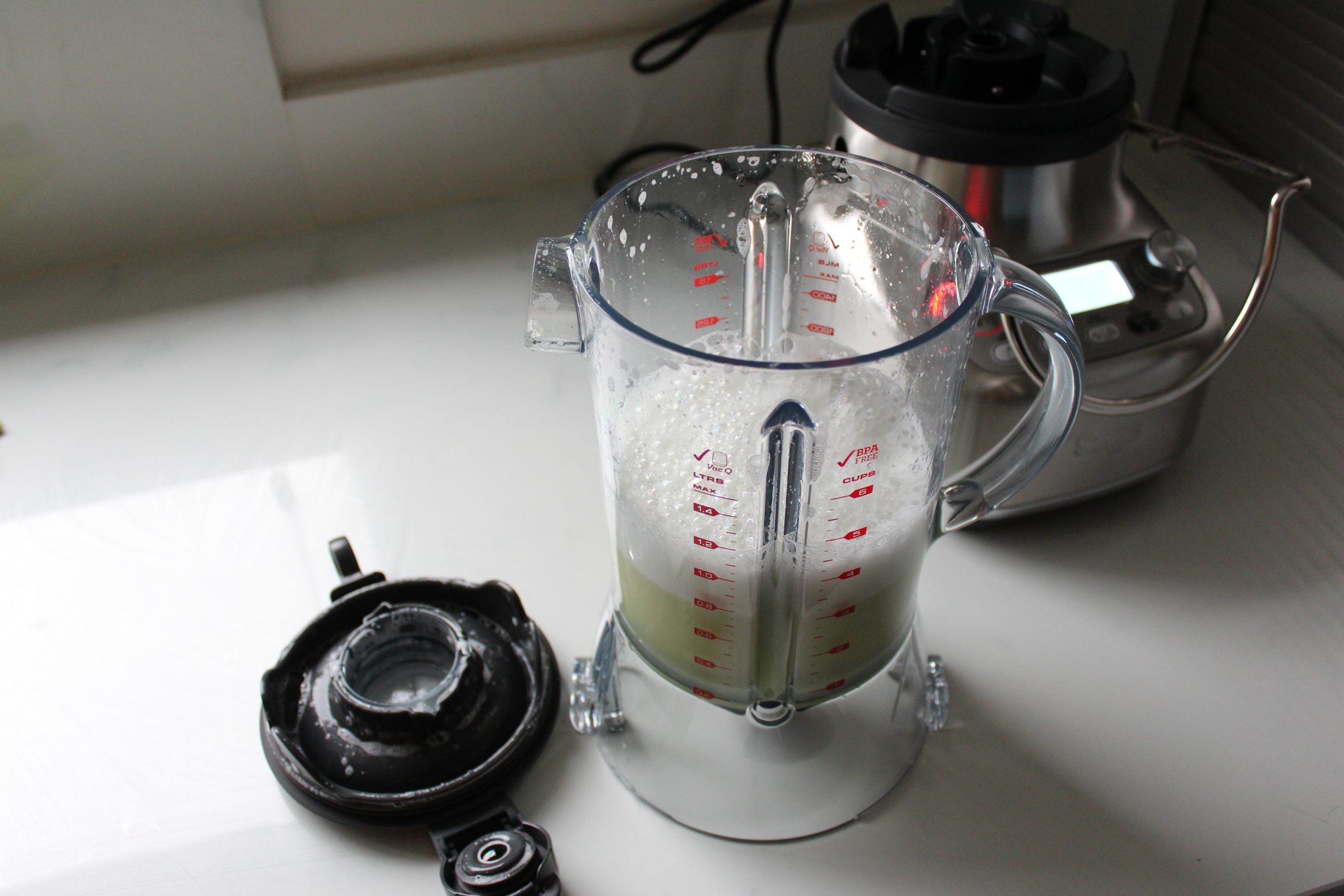 So many others leave the lid dirty, meaning that the clean jug becomes contaminated again as you take it apart. The rest of it is easy to clean too – all dishwasher safe, bar the pusher, and there’s a brush to remove fibres from the juicing mesh. A retractable cable is another bonus.

It’s also worth noting that this model is compatible with Sage’s vacuum pump, which removes excess air for less frothy smoothies with greater colour preservation. However, it’s not included, which is surprising given the Bluicer’s price point.

What you get with the Bluicer is the benefit of juicing expertise. Its juicer section has some of the same features as Sage’s range of standalone juicers, such as cold spin. This creates less heat while juicing, which may help to preserve the nutritional content. There’s also an extra-wide 88mm feed chute, which is great for cutting down on food prep. 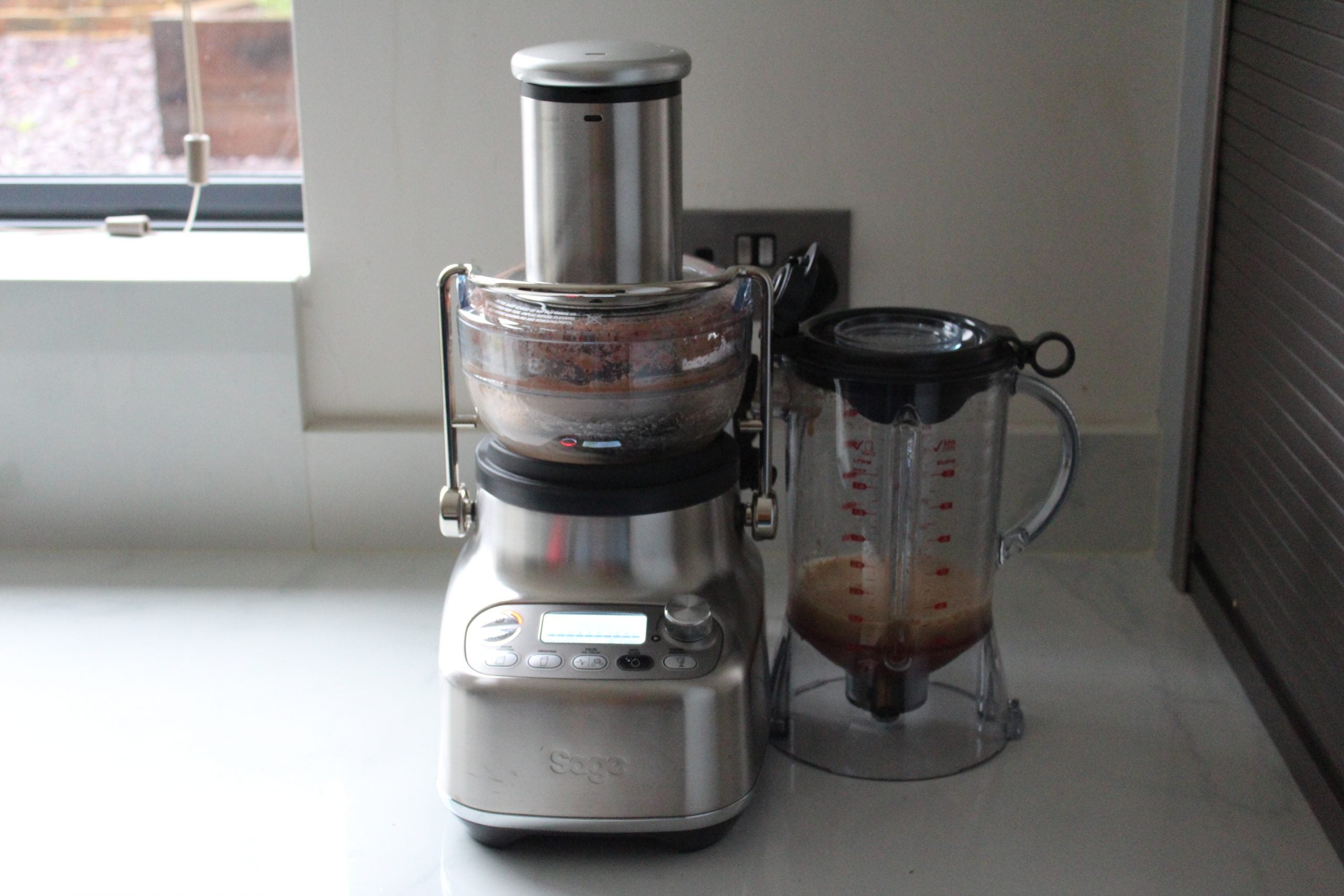 I was able to fit in whole apples and large chunks of fruit without issue. It’s also worth noting that the chute is made from stainless steel, which is likely to be far more robust than the plastic versions on more affordable juicers. There’s a spout extender if you prefer to juice into a glass instead of the carafe, and a removable spout plug, so that when you’re finished juicing, it won’t leave drips on the worktop. 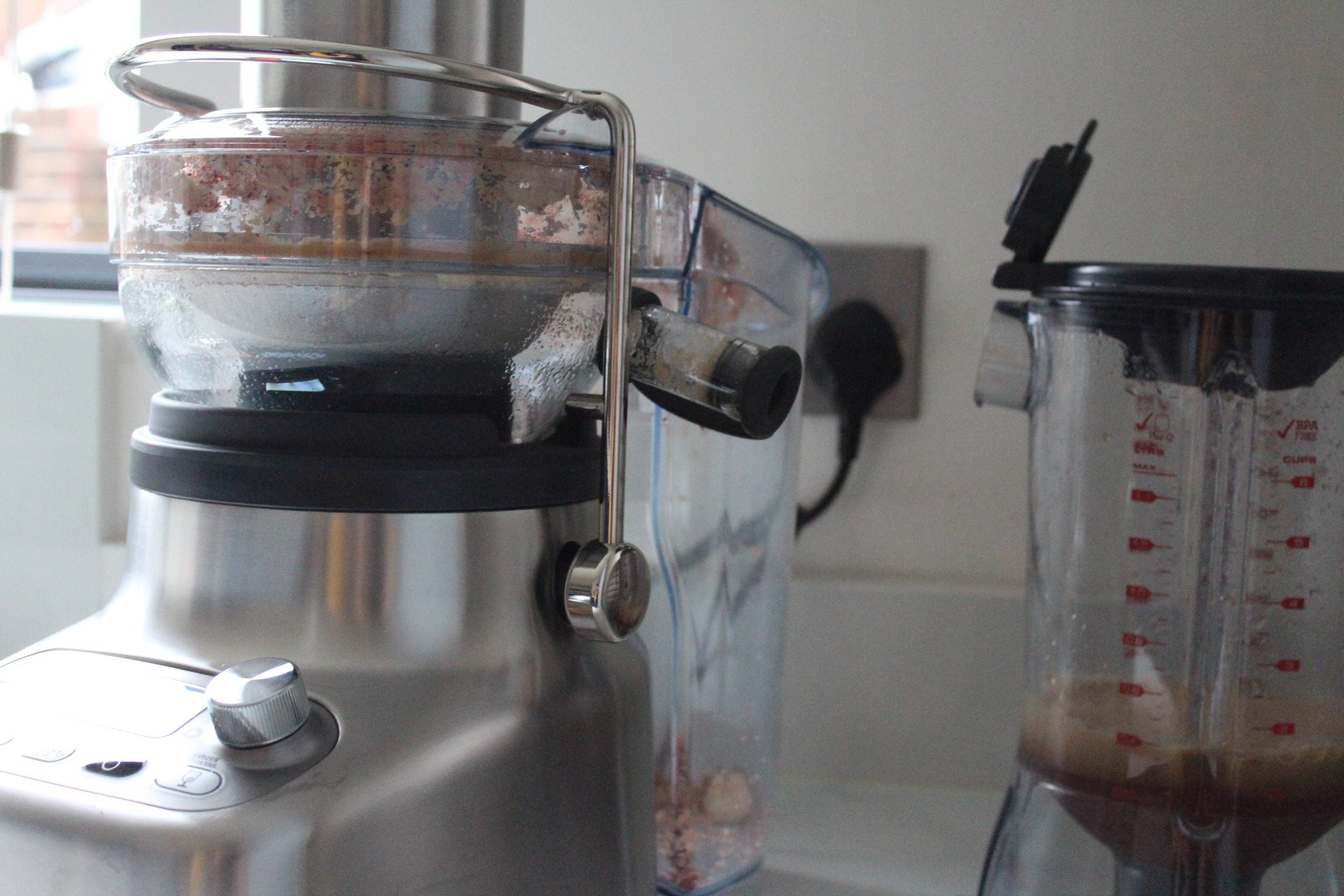 The base differentiates between the blender jug and the juicing attachment, switching the display from programmes to speeds labelled soft 1 to hard 10. This is useful, especially if you’re new to juicing. However, I found the results to be mixed. 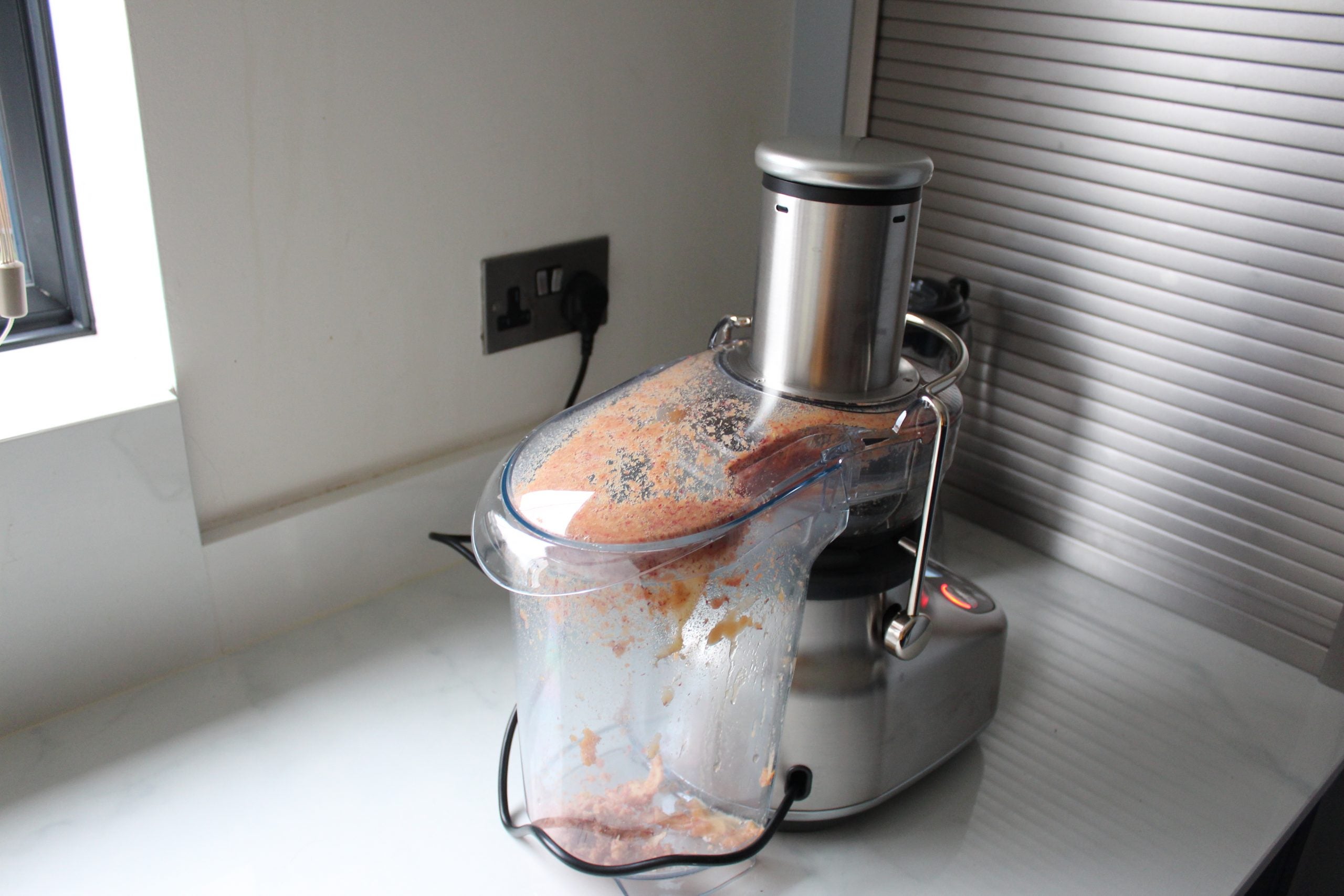 While three apples resulted in a fair amount of pulp in the lid, rather than in the bin, and around 250ml frothy juice (sadly the jug doesn’t have a separator to skim foam off), which is about average, citrus juicing fared less well. Four oranges without skin were juiced on the lowest speed of 1 but this produced only half a glass of OJ. 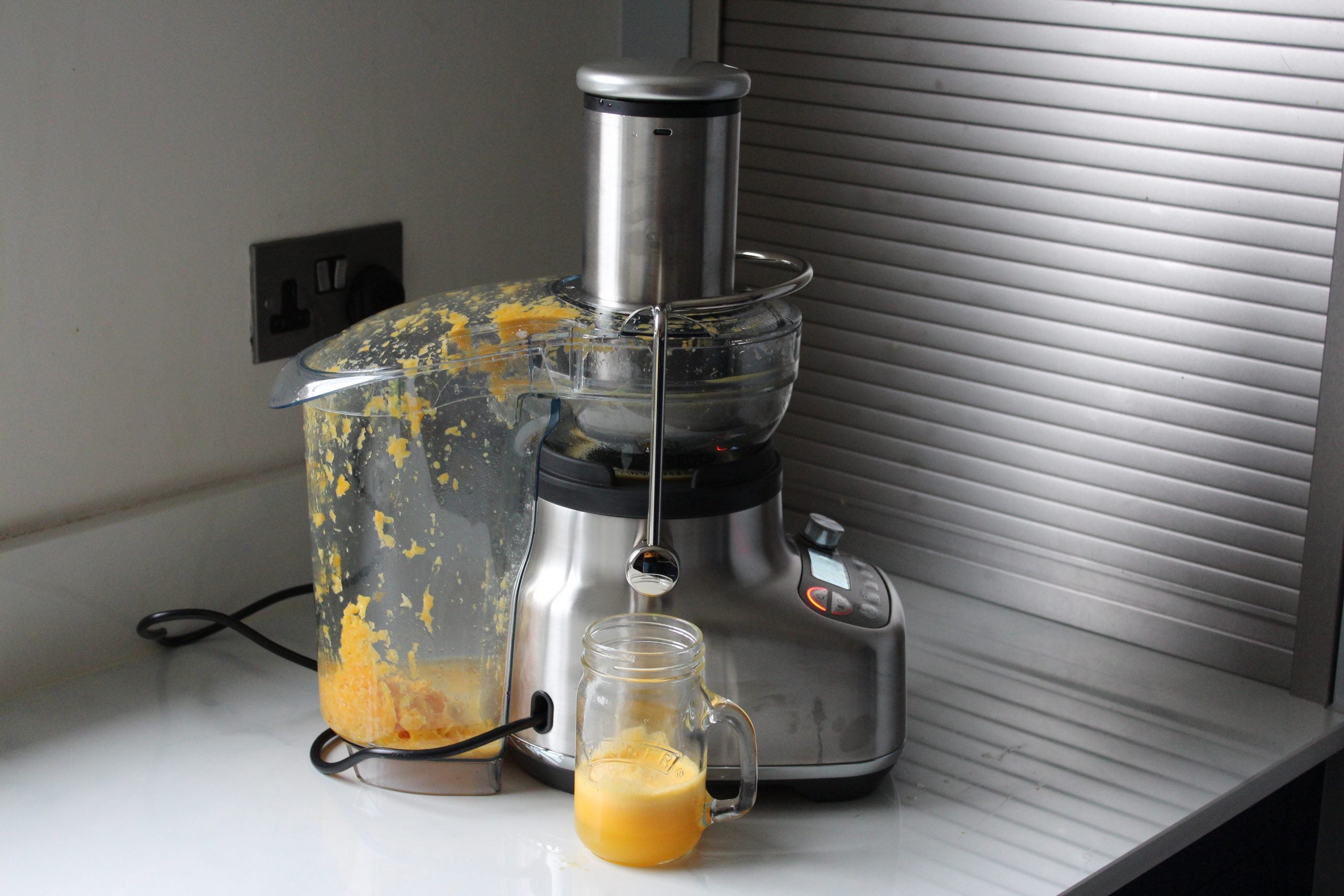 Some juice ended up in the pulp bin and some remained in the attachment. It may be that this softer fruit would produce a better yield when combined with harder fruit.

Should you buy the Sage 3X Bluicer Pro blender and juicer?

There are two ways of looking at the Bluicer – one is adding more flexibility and functions to a less frequently used appliance, the juicer, to create one that’s guaranteed to be more of a worktop staple. The other is bolting on a juicer to a blender – making it ideal for those may not have the budget / space / dedication to juicing, and might not have invested in a standalone model.

Either way, the Bluicer is sure to tick a lot of boxes – it’s good for those short on kitchen space, families, and anyone seeking a healthier lifestyle. While it didn’t put in a faultless performance on test, its ability to suit whatever fruity choice you’re in the mood for gives you a smoother path to five-a-day.