What is the Russell Hobbs RHFM2363B?

The Russell Hobbs RHFM2363B is fairly affordable microwave that borrows looks and some features from high-end models. So it has a flatbed design rather than a turntable, which means it can be used to cook and reheat large dishes. Its mirror-finish door looks great but is a fingerprint magnet.

It’s a good buy if looks matter to you but you don’t want the expense of a premium model and don’t need fancy features. If looks aren’t your priority though, you can get more for your money elsewhere. 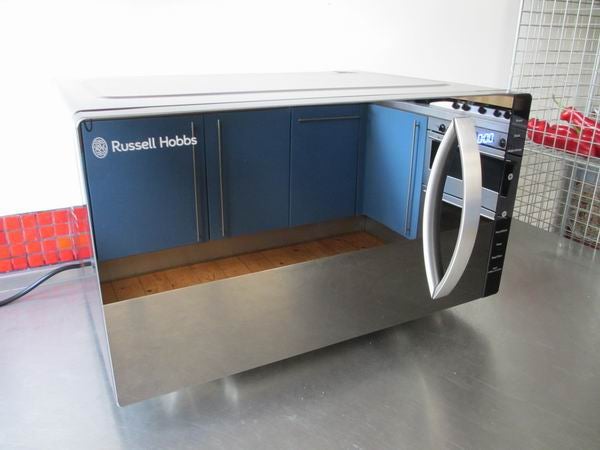 The Russell Hobbs is a good-looking microwave that borrows styling and some features from higher-end models. So while it doesn’t have a full-width door, the door is all glass, with a mirror finish and display that shines through it. The exterior’s top and sides are black.

It’s dark and would look great in a modern kitchen, but be warned that the mirrored glass is a fingerprint magnet – you’ll need to either stop (everyone in he family from) touching it or be prepared to give it a regular wipe. The rest of the exterior is black and there are touch controls to the right of the door.

Flatbed technology, again borrowed from pricier models, means they have done away with the turntable, instead relying on other technologies to ensure even cooking. This means it’s possible to fit much larger dishes in the microwave, for example to reheat meals in rectangular oven dishes that would  have been impossible on a turntable.

One of the technologies it relies on for even cooking is a “diamond cavity” structure. This basically means that the walls aren’t simple flat surfaces but textured, so microwaves are reflected in a more varied way – the theory is that it cooks food not just more evenly but faster as a result, saving time and money.

More basic features include a clock and 95-minute countdown timer. 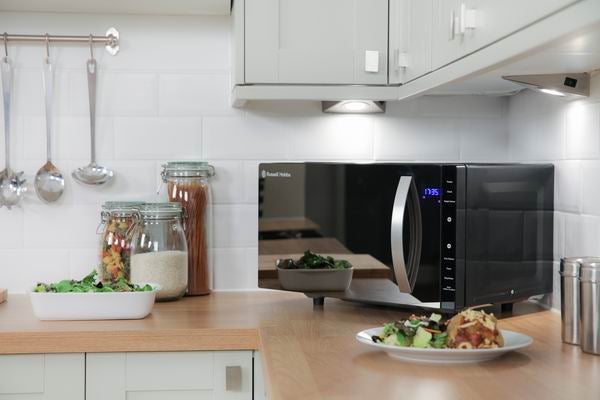 The Russell Hobbs’ door design is clever. When it’s open you have an easy-to-read list of its eight programs. When closed, this is covered up and you can just see a small number of discreet touch-sensitive buttons: to select cooking mode, power and time.

We found the controls weren’t very responsive: you have to give them a good, firm push and sometimes find yourself pressing them repeatedly, unsure whether it’s being registered.

You can cook or defrost by weight or time. Alternatively it has eight programs: pizza, meat, vegetable, pasta, potato, fish, beverage, popcorn. Each of these has just one or two suggested weights, so it’s a blunt instrument. For example, we cooked a huge (750g) jacket potato but the potato program only offers three options: 200, 400 or 600g. So we put it on for the latter, a program time of 13:30 minutes. 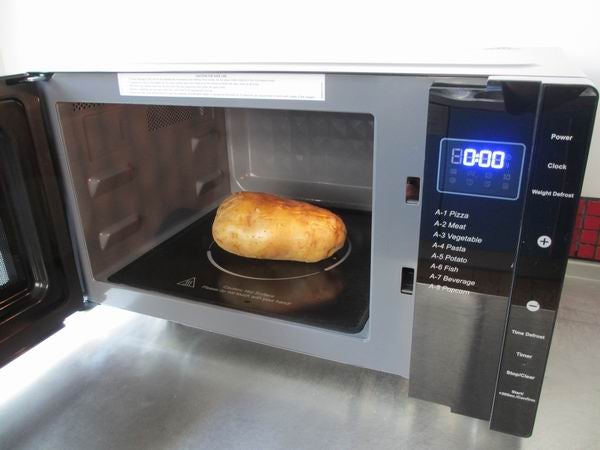 Despite turning it over halfway through the cooking time, it was cooked unevenly: cooked more underneath than on top, although to give the Russell Hobbs its due the cooking was very even side-to-side. A further 3 minutes at full power and it was cooked through, a competent microwave jacket spud: quick and edible but not a patch on the crispy jacket of spuds cooking in an oven or combi.

We also tested the defrost feature on a pitta bread and found it worked well: it came out warm but not cooked, and only a bit soggy on the underside.

The flatbed surface is markedly easier to clean than a turntable. Nothing to take out and no nooks and crannies, you can clean off all but the most cooked-in stains with a quick wipe. After cooking or defrosting it’s hot inside, especially the base, but not too wet. As mentioned about though, the mirrored glass door collects fingerprints so be prepared to wipe it clean regularly. 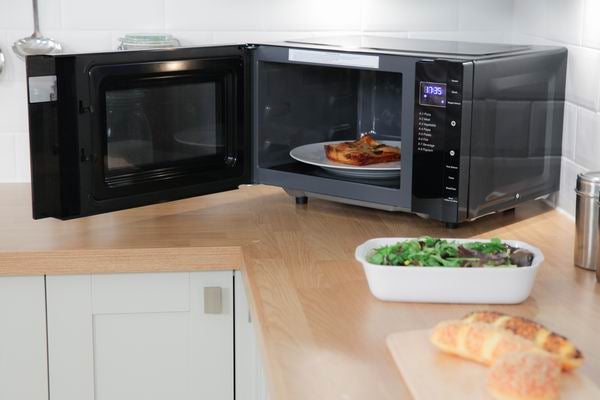 Should I buy the Russell Hobbs RHFM2363B?

If looks matter but you only need a straightforward microwave then maybe. This is a competent, fairly small microwave with no fancy features apart from its flatbed design. What stands out is its  modern design, which makes it look like more like a premium appliance.

If you want a real premium appliance with a larger capacity, look at the Sage the Quick Touch. If you’re on a budget then consider the Swan Vintage SM22030.

This sleek, modern-looking microwave doesn’t have fancy features but it does look the part.