The Russell Hobbs 22241 is a cheap and cheerful hand blender, in a really good way. If you simply want a blender without fancy extra feet for other jobs then this really does the job fine – save your money.

At 200W it’s not very powerful, but it did a good job of blending soup. Chickpeas were a bit harder going but it still got through them fine. 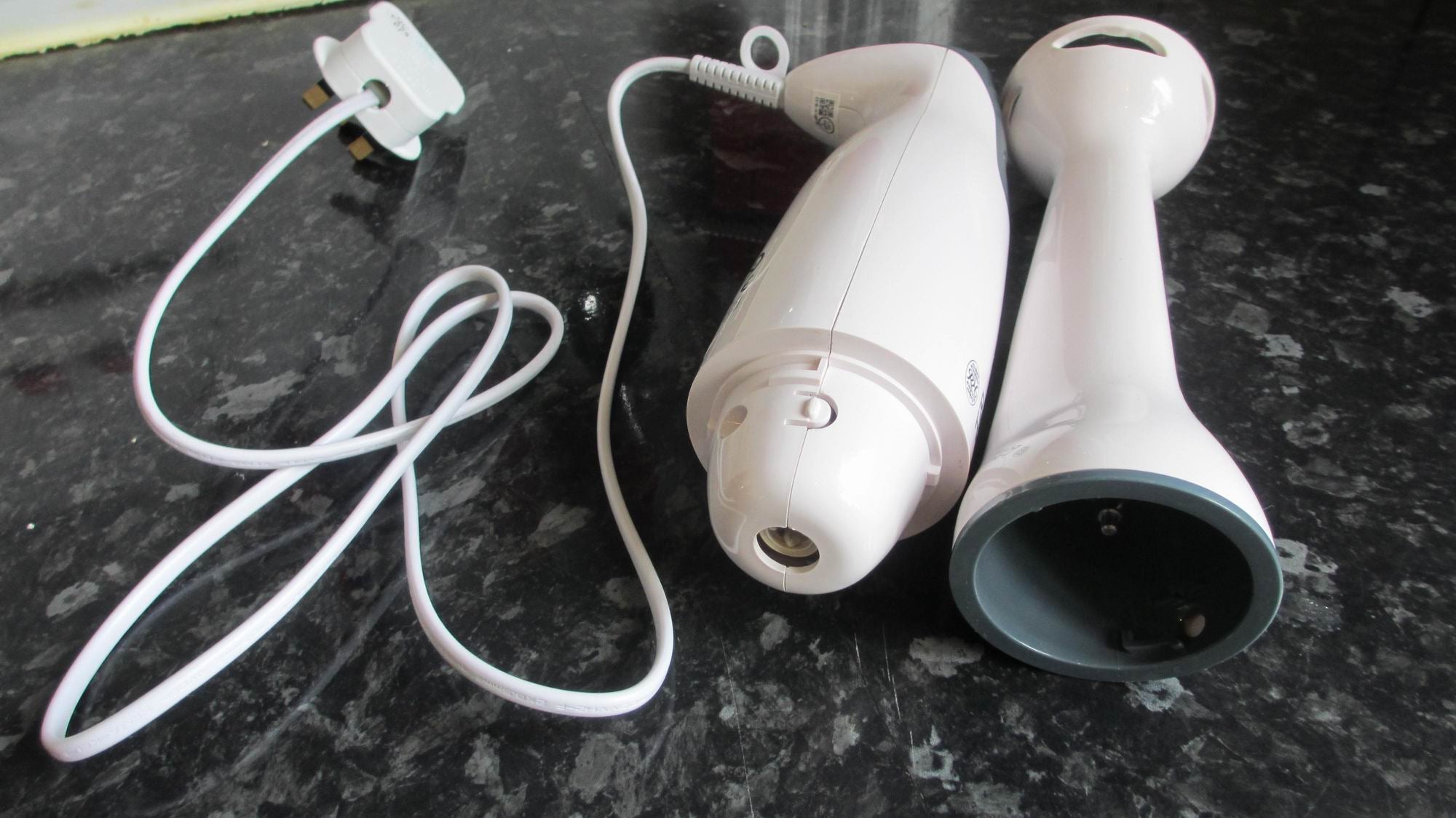 If this stick blender was a supermarket branded product it would be in the Basics or Essentials range. It’s cheap as chips but does a simple job well.

Is just has one foot: a blender with a two flat blades. And while its motor is low powered at 200W it does offer two speeds. 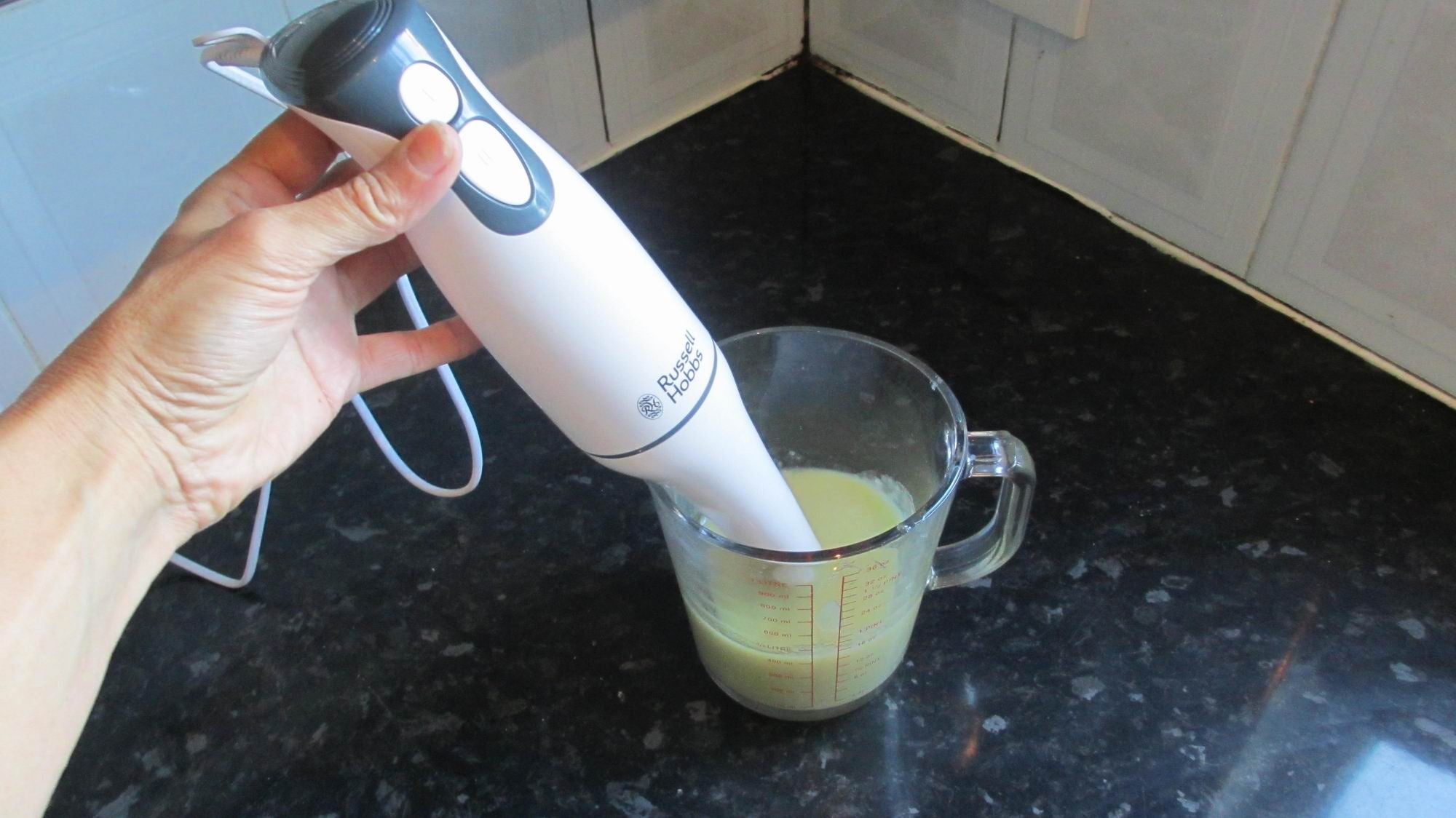 The only visible indicator of its price tag is the blending foot being made of plastic, not metal. This means it’s more susceptible to heat and stains… but it also means it won’t scratch non-stick pans.

The gloss white design is simple, clean, fine if a bit boring. The blending foot twists off for cleaning and storage. At the top, just where the power cord meets the blender, is a small loop: you can hang this blender up, but only on a small hook. 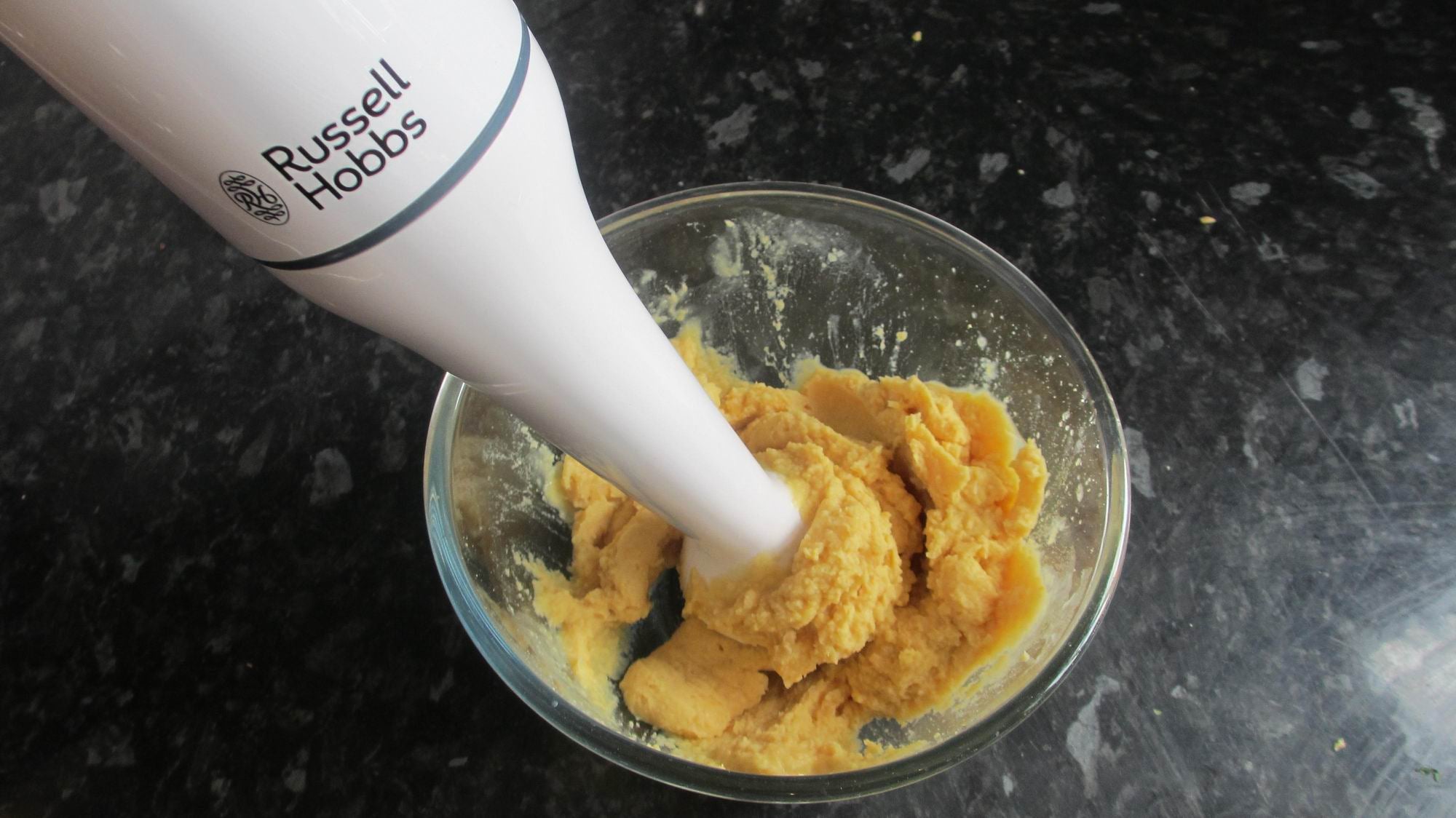 The trigger grip at the top of the Russell Hobbs feels comfortable in the hand and it doesn’t feel cheap. Your index and middle finger fall naturally on the two buttons.

The blender did a fine, fast job of blitzing soup. But its 200W motor struggled a bit when it came to chickpeas, even on the faster of its two speed settings. The mixture didn’t move about much in the bowl – perhaps because of the Russell Hobbs’ flat blade – so we had to move the blender up and down instead. 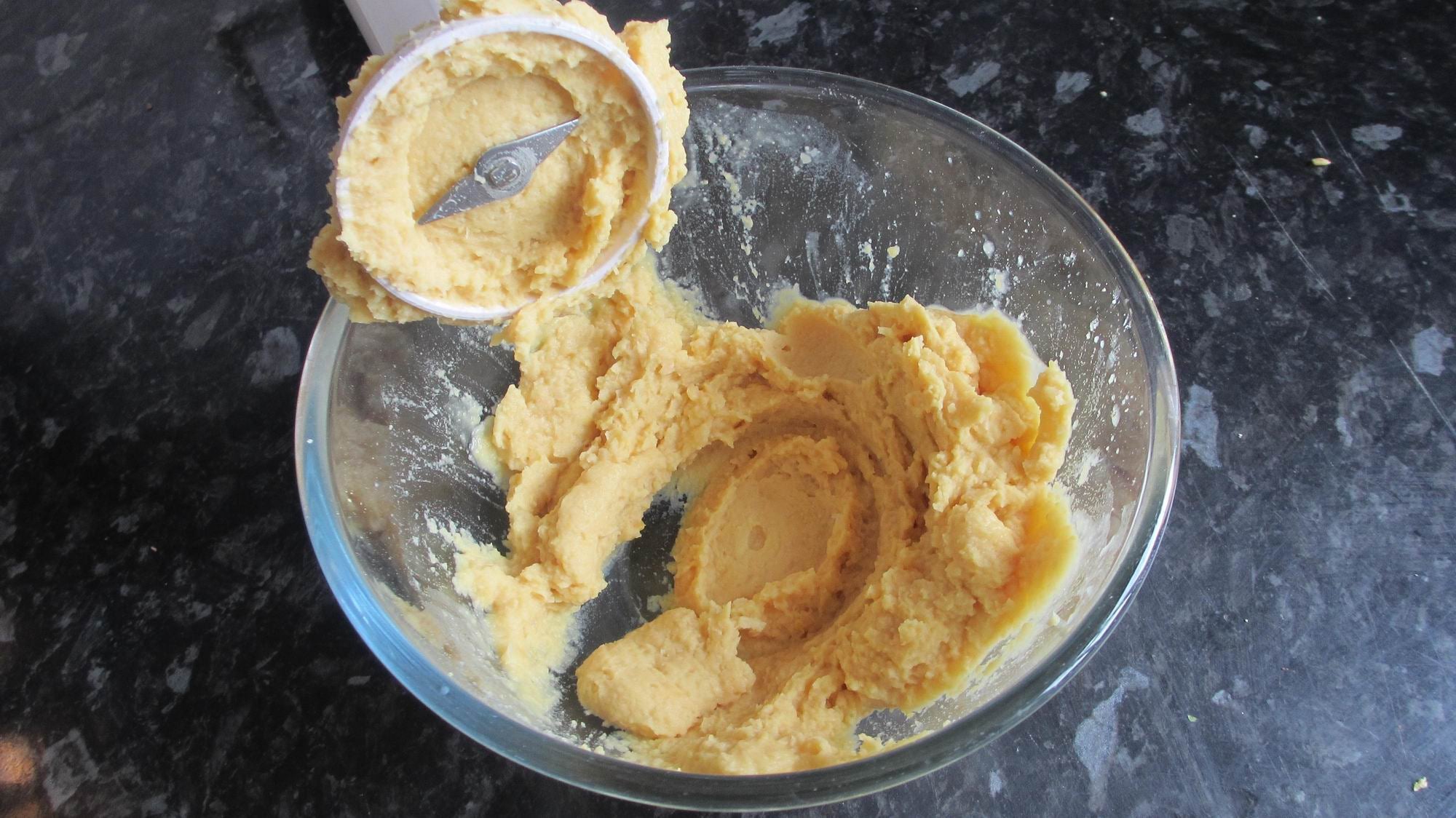 The resulting hummus was pretty smooth: pleasant enough but not the best on test. It had a bit of a mushy peas consistency.

As with any stick blender, the easiest way to clean is by immersing it in some soapy water and turning the blender on. This worked pretty well but the four small slits in the side of the base of the blending foot were bunged up, so they needed a quick brush first. 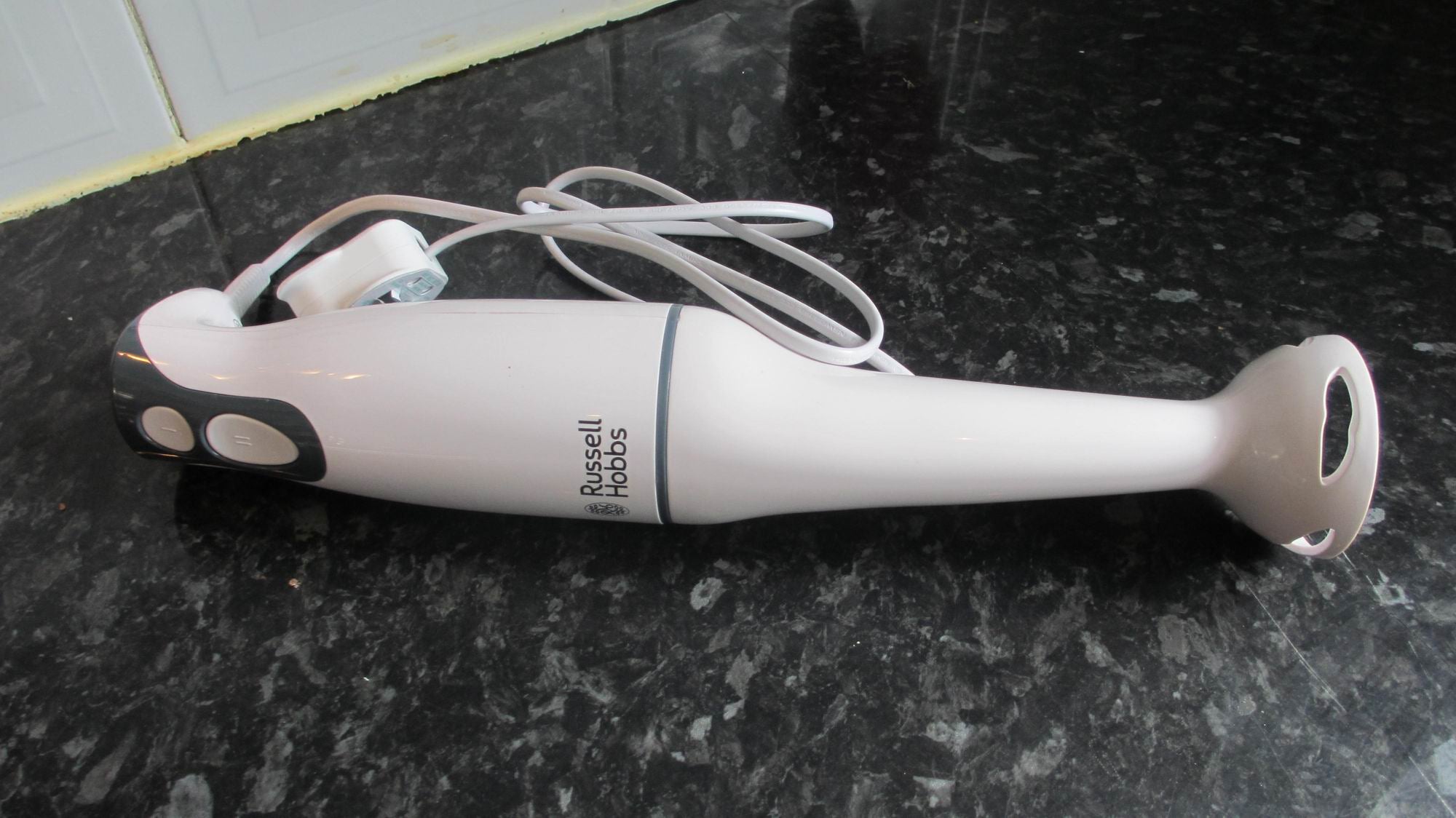 Yes, if you just need a simple blender. It’s a bit weedy but it does the basics just fine and it really is keenly priced. So if you don’t need extra accessories you’ll save cupboard space as well as money.

Our best mid-priced blender is the Braun MQ3025, which boasts three attachments but doesn’t take up too much space. Or consider the Tefal Infiny Force with even more foodie features.

A cheap and cheerful stick blender – and I mean that as a compliment.