What is the Russell Hobbs Chalk Board Slow Cooker?

A matte-black finish is usually a design statement, but in the case of this Russell Hobbs slow cooker, it’s so you can write on it with chalk.

Whether that’s the contents of the pot, the time dinner will be ready, an ingredient to be added, or something a bit more tongue-in-cheek is up to you. Chalk board aside, this is otherwise a pretty standard slow cooker, suited to gradually simmering cheaper cuts of meat and vegetables to create economical, nutritious and mouthwatering meals ready for when you walk in the door. 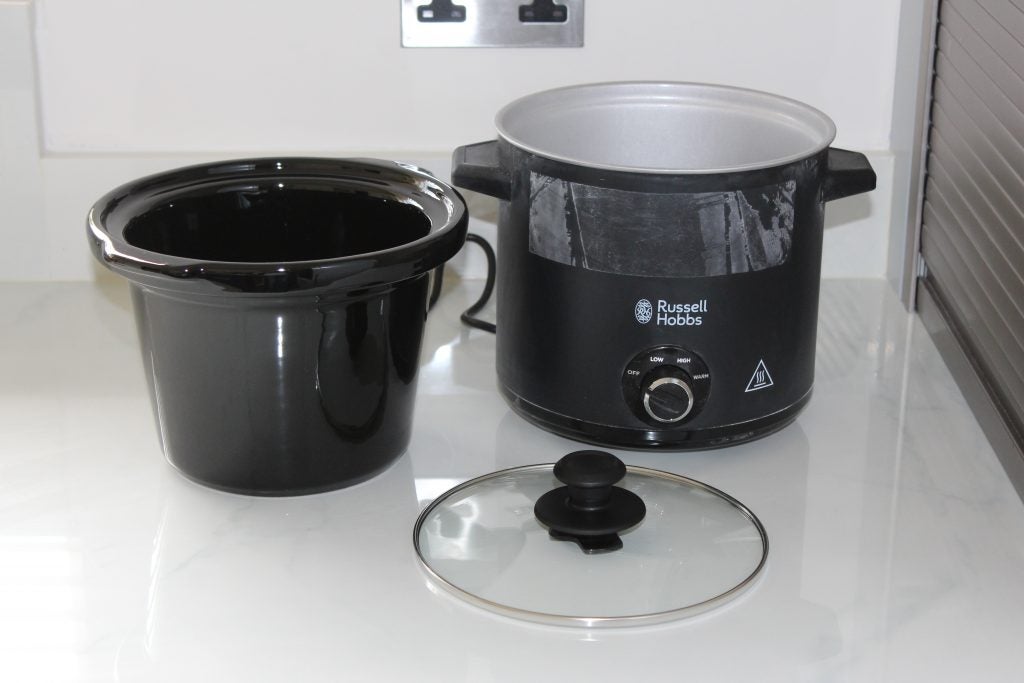 The Chalk Board Slow Cooker is more compact than some, sporting a tall, rather than wide, design. This means it takes up less room on the worktop. It will still cook up to four portions, but bigger families may find it limiting. The cooker comprises a heat-up base unit sporting two sturdy carrying handles, a removable black ceramic pot, and a glass lid so you can keep an eye on progress without having to remove it.

On the front, a dial controls the temperature with three settings: low, high and warm (for keeping cooked food at temperature prior to serving). Most of the recipes provided with the slow cooker offer the option of heating at low for a longer period or high for faster results. These allow each recipe to be adapted to your schedule. Note that there’s no timer function. 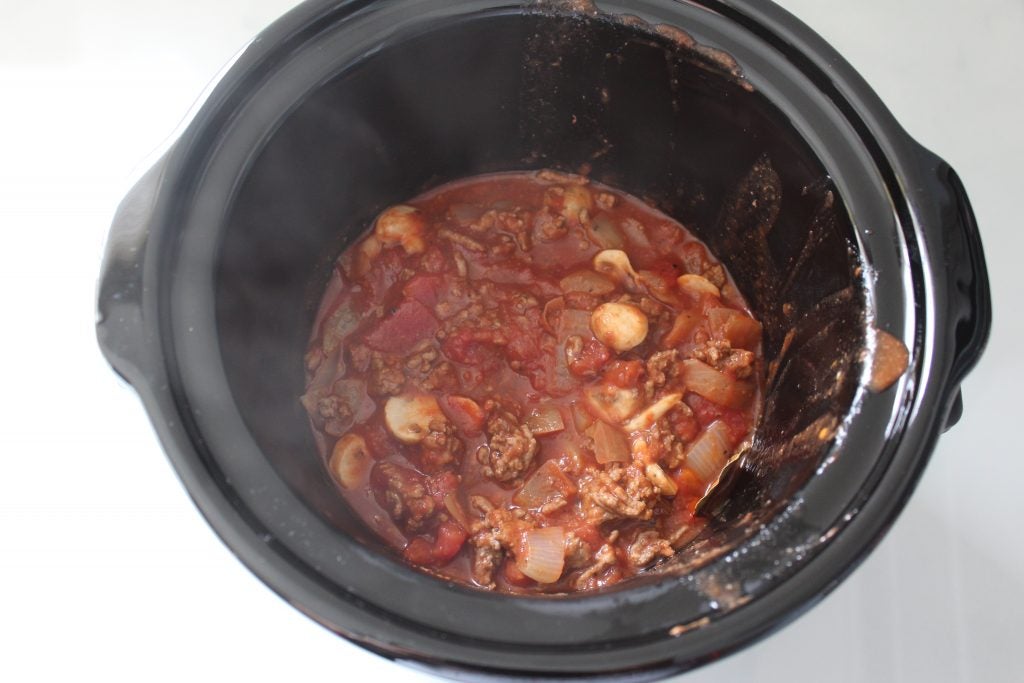 Russell Hobbs Chalk Board Slow Cooker – What’s it like to use?

Before starting to use the slow cooker, I had to condition the base unit’s surface by rubbing it all over with the chalk that’s provided. Unfortunately, a sticker denoting that the surface could be written on left behind a significant amount of adhesive. I was unable to remove this through wiping alone.

There’s guidance on how long to cook certain foods in the instruction manual, and a few pages of recipes to get you started. I began by making Bolognese sauce. This required all the ingredients to be sautéed in a pan before transferring to the cook pot. This extra prep time made the cooker feel far from convenient.

Once the prep was complete, I selected the low setting, which corresponded to 6-10 hours of cooking. There wasn’t a light or sound to show that the cooker was heating up, so I had to check a few minutes later to confirm it was working.

Half an hour later, I checked on it again. This time, bubbles around the edge of the sauce could be seen through the glass lid and the exterior of the cooker was hot to the touch. Six hours later, the sauce has noticeably reduced, although it still remained relatively liquid. Removing it from the pot was a bit tricky; it was quite heavy when filled. None of the ingredients had burned, although some clumps of mince were dry. However, the sauce itself was delicious, the slow-cooking having accentuated the different flavours.

Next, I used the slow cooker to make the recipe for vegetable soup. Again, all the ingredients had to be sautéed and boiled before placing in the cook pot. It seems a shame that the cooker doesn’t have a hot enough setting to be able to sauté. The instructions also advise pre-heating the slow cooker for any recipe that hasn’t been initially cooked.

For the vegetable soup recipe I selected the high setting, which had a recommended cooking time of 4-6 hours in order to sufficiently soften the root vegetables. After four hours, the soup was cooked and had a thickened consistency. 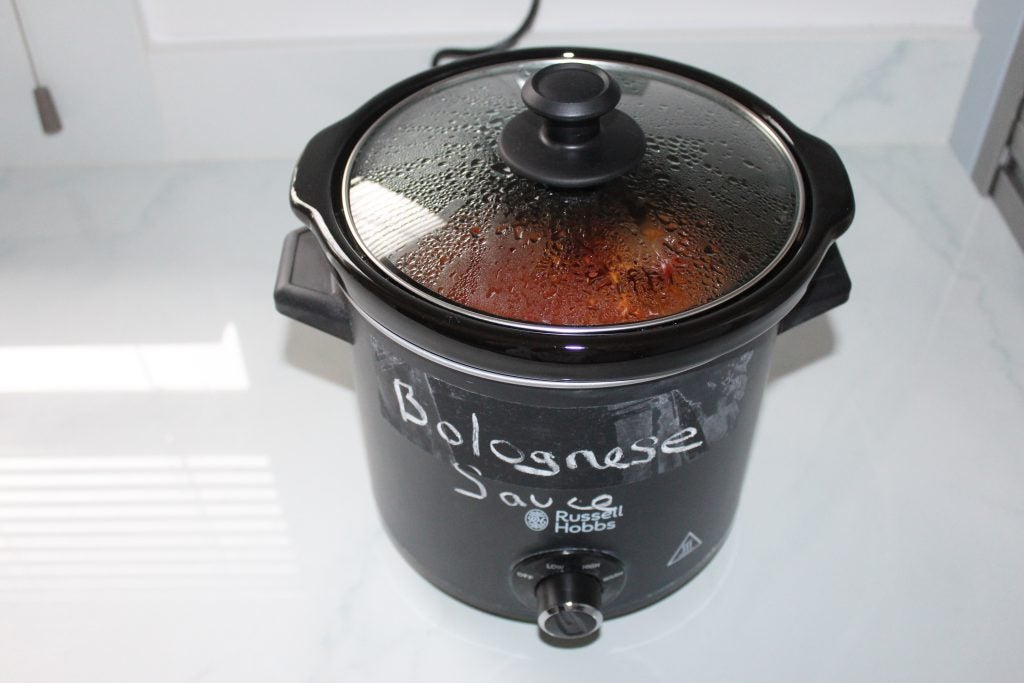 One of the issues this recipe highlighted was the loose lid of the cooker. While this resulted in a tempting aroma of soup as it cooked, it also allowed steam and condensation to leak out. When cooled, this left a puddle of water on the worktop. The exterior was very hot on the high setting. Switching it to the keep-warm setting preserved the soup at a hot – but not boiling – temperature.

Finally, I made a dessert recipe of baked stuffed apple, which didn’t require any pre-cooking. Having stuffed apples with sugar and sultanas, I placed them onto a foil ‘saucer’ in the pot and poured hot water around it. Using low for six hours (of a recommended 4-6), the apples overcooked and disintegrated.

The pot and the lid are dishwasher-safe, although the instructions warn that this can affect the finish over time. Cleaning the cooker’s pot by hand was more laborious, the black finish making it difficult to see traces of food left behind. 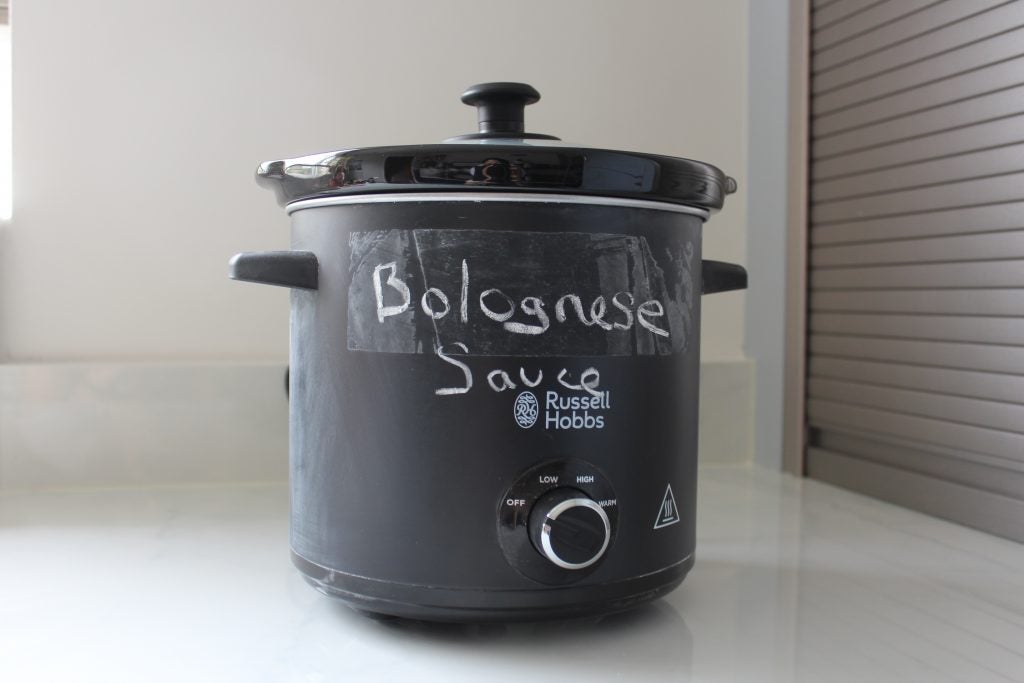 Why buy the Russell Hobbs Chalk Board Slow Cooker?

While it may lack the features and accessories of more expensive models, the Chalk Board Slow Cooker is affordable and functions sufficiently as a basic buy for a small family or couple.

Where it disappoints is the adhesive left on the chalk board and a leaky lid on the high setting – things that could be worked around if you don’t mind occasional wiping up. Otherwise, it cooks well and has the potential to be a handy kitchen appliance.

Use the chalk to write “could do better” on this compact cooker.