Available on Android and iOS
Time was, anyone looking to emulate their rugby heroes would have got together with their friends and taken a run out with a curious shaped ball under their arm at their local park. Now, for better or worse, they’re more likely to download a game like Rugby Nations 15 on their smartphone or tablet.

Rugby, though, is a curious sport. While games like football and tennis are straightforward for developers to translate into competent videogames, rugby is a sport full of complicated rules, set pieces and – this shouldn’t be overlooked – up to 30 players on the pitch at any one time. While good football games are ten a penny, games that represent rugby union with any degree of sophistication are few and far between.

If you’re thinking it’s unlikely that Rugby Nations 15 – the latest in Distinctive Games’ persistent franchise – is the game to change all that, you’d be right. Shackled by the sheer complexity of your average rugby union match, Rugby Nations 15 does only an adequate job of attempting to represent the sport. Indeed, play for any length of time and it becomes clear that the developer has, instead, looking to simplify the game to deliver something fun, even if it isn’t authentic. 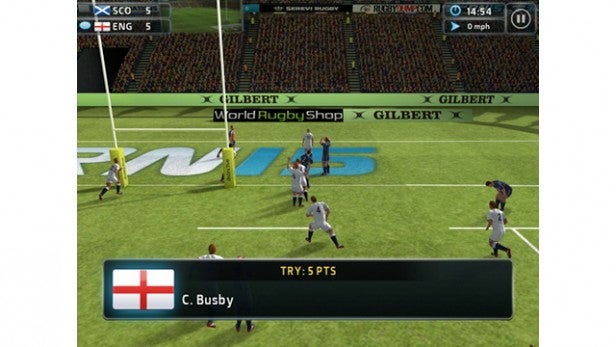 In this endeavour, it’s fair to say Rugby Nations 15 is moderately successful. Offering up friendly encounters, specific challenges of full blown tournaments like The Six Nations or the World Cup, there’s no skimping when it comes to content – Distinctive Games continues to position the Rugby Nations franchise as the sport’s consummate parter. Rugby’s FIFA, if you like.

Play itself, however, is some way off representing what actually takes place on the rugby field. Indeed, to say Distinctive Games has stripped back proceedings to the bare minimum would be putting it lightly. Games essentially revolve around the formations of rucks. When in possession, your goal is to pass the ball side to side until you spot a gap, at which point you press down on the game’s sprint button and make a dash for the line.

The direction your player runs in is controlled by accelerometer, while everything else is assigned to virtual buttons on either side of the screen. It’s fair to say controlling your players is no big problem: more often than not, your attempts to dash for the line will be halted by the opposition’s defence, at which point you can then call plays from either side of the pitch to form a ruck to support your fallen attacker. 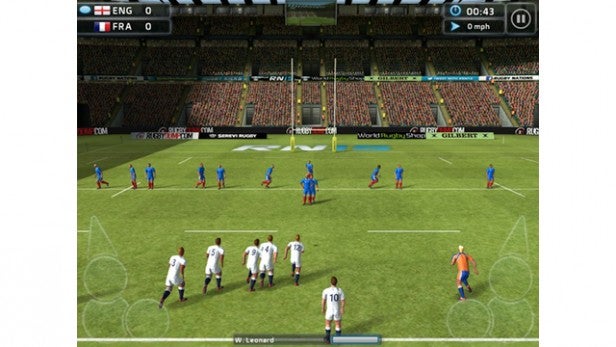 Assuming the ball isn’t turned over – something that seems to happen almost at random – you’re then given the option to either pass the ball out from the ruck left or right, or to make a short pass to a player at the back of the ruck who then swings round and runs for the line. This, pattern – dash, ruck, dash, ruck, dash – forms the basis of most matches and, indeed, even when out of possession, your role doesn’t change all too much.

Catch an opposition player in possession and haul them to the ground and then a ruck will form, with the game again tasking you with adding players to either side. Get enough players in there early enough and, despite the game giving little indication as to how or why, there’s a chance you might steal possession back. If not, they’ll pass the ball out and the whole process will begin again.

Of course, as rugby union fans would point out, this is the basis for most rugby matches in real life and, to be fair to Rugby Nations 15, there are other elements to play: scrums are fairly good fun, with the idea being to swipe up as quick as you can in order to push the rival pack back. Kicking for goal is also as logical as you might think: swipe up fast, long and straight in order to send the ball between the posts. 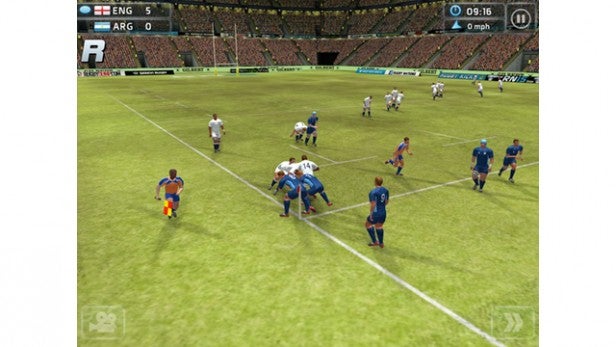 The bigger problem is that, because of Rugby Nations 15’s somewhat stagnant A.I., there’s no real fluidity of movement within either your team or the opposition’s. The thrill of catching the rival team out by catching the ball mid-air and running the length of the field across the line? Rare. The raw emotion that comes from powering the opposition’s ruck further and further back down the field? Mechanised.

Indeed, the most telling emotion Rugby Nations 15 stirs up is laughter, when – rather than tackling you – the opposition’s back line simply runs with you as you head for your line, getting a damn good view of your triumph in the process. Even more bizarrely, sometimes they actually track ahead of you, as if clearing the path for your procession to victory.

It would be unfair to suggest it’s in any way impossible to enjoy Rugby Nations 15’s dash-ruck-dash set up once you’ve mastered it, but the engine it’s built around simply isn’t fit for purpose in 2014, even on iOS. To put it simply, this feels as basic and as backwards as a sports sim from the 32-bit era and, while Rugby Nations 15 may not have much in the way of competition, that doesn’t mean it wins by default.

Verdict
Like a sports sim from decades ago, Rugby Nations 15 is overly simplistic in its approach and built upon an engine that simply can’t mimic the fluidity and complexity of a sport like rugby union. Though fun in short bursts, Distinctive Games needs to go back to the drawing board if it wants to do the sport of rugby any justice.