What is the Roth NEO 6.2 SoundCore?

The NEO 6.2 SoundCore is Roth’s debut soundbase, a single-body speaker designed to sit discreetly underneath your TV. The idea is to improve your TV’s sound while leaving only a minimal footprint, which is the ideal compromise if you don’t have room for a full 5.1 system.

Roth has been dabbling in soundbars for a while with its impressive Sub Zero range, so we’re keen to hear how its talents translate in the soundbase arena. It’s a fiercely competitive market already, populated by the likes of Sony, LG, Samsung, Canton and Tannoy, but a glance at its impressive spec sheet suggests Roth’s effort could be a serious challenger – provided its performance is up to scratch, of course.

The SoundCore is available in silver or black, allowing you to pick the best match for your TV. Roth sent us the silver version, which is effortlessly eye-catching – the brushed silver contrasts beautifully with the black cloth grille wrapped around the front and sides.

This grille is broken up on the right-hand corner by a silver strip that curves down from the top, housing a vertical row of buttons (standby, source and volume up/down). There’s no front panel display, just a small LED on the right that glows different colours for each input and blinks when adjusting volume, bass or treble. The NFC touch point is found on the left hand side by the Roth logo. 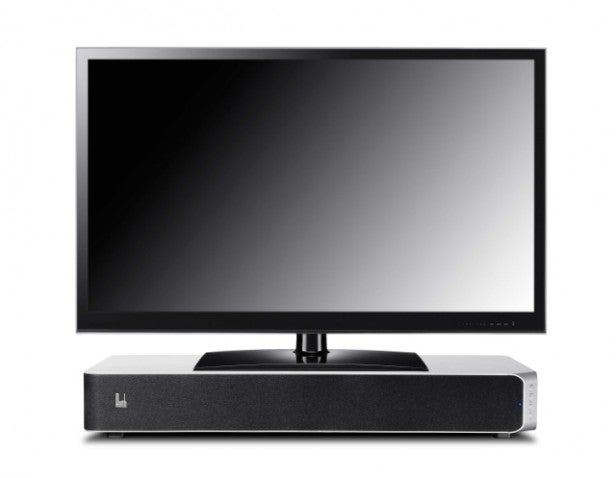 Size-wise it measures a fairly chunky 93mm high, while the 650mm x 350mm top panel can accommodate TVs from 32in up to 60in (provided the stand fits within that surface). Its robust build allows you to plonk your TV on top with confidence – indeed, it showed no signs of strain beneath our 21kg Samsung 55-incher.

On the generously stocked rear panel you’ll find four HDMI inputs, the most offered by any soundbase to date. That means you can channel your TV box, Blu-ray deck and games console through it and still have room for future expansion.

The HDMI output is ARC-enabled and can therefore receive audio back from a compatible TV – handy if you want to listen to TV broadcasts from its built-in tuner. The other good news is that these HDMI sockets will pass through 3D and 4K signals.

The HDMIs are joined by optical and coaxial digital inputs, two analogue inputs (3.5mm minijack and RCA) and an output for an external subwoofer, should the unit’s built-in subs prove insufficient. That’s a fairly comprehensive line-up of sockets, by far the best we’ve encountered.

The SoundCore doesn’t skimp on features either. Built-in Bluetooth is a regular feature on soundbases, but it’s great to see Roth has opted for aptX decoding to ensure the best possible sound quality. NFC makes it easy to pair compatible Android devices. 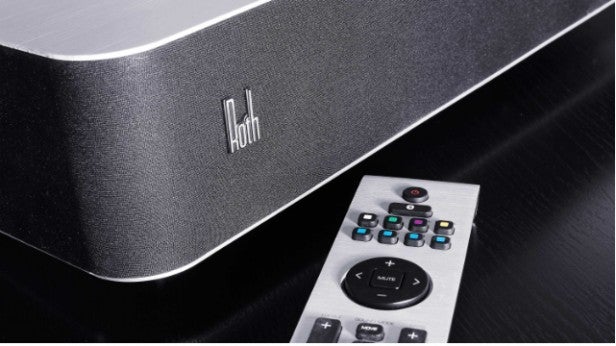 Like most soundbases, setup is quick and easy – that’s one of the reasons they’re flying off the shelves. It’s just a question of placing it under your TV and rigging up your cables.

One minor gripe is that that front LED is too small and dim to see clearly from the sofa, and isn’t a particularly helpful visual guide when tweaking the bass and treble levels. It blinks when you press up or down and stops when you reach the limit – we had to count the blinks to work out that it goes from -4 to 4. An alphanumeric display would have been better.

Roth has invested a lot of time and money in the remote, which is a massive step-up from the Roth’s previous soundbar zappers. It’s long, weighty and glamorously styled in brushed silver. The chunky rubber buttons are intelligently laid out – at the top you’ll find individually-labelled keys for each input and circular volume/Bluetooth controls below them, while dedicated bass/treble and sound mode buttons are found lower down. If only more remotes were like this.

First things first, the SoundCore needs a lengthy run-in before it’s ready for battle. Out the box it sounds a bit sharp and resonant, so give the speakers plenty of time to loosen up. That goes for most soundbars and bases, but seems particularly important here.

Once it beds in, the Roth delivers a loud and lively sound. There’s enough bite in the midrange and treble to make action scenes sound dynamic, but it won’t give your eardrums a battering like some soundbases.

With Godzilla on Blu-ray (fed into the HDMI input), the movie’s spectacular set pieces are handled with impressive energy and composure. As the tidal wave rips through Honolulu, the cacophony of terrified screams and crashing water is dramatic but not brash. It does honk a touch at high volumes, but only when you push it beyond sensible listening levels.

Soaring jets, crumbling buildings and growling monsters are direct and well defined, sounding fuller and more forceful than any TV speakers. Voices cut through busy scenes easily and the agile speakers reproduce fast machine gun fire with alacrity. There’s a pleasing sense of openness too, particularly when you engage the expansive Movie mode.

It even teases out lots of detail, from tinkling glass to background activity in the bustling Army control room, and there’s a crisp leading edge when objects smash into each other. That said, it falls short of the finesse and sophistication of Canton’s DM50 and DM75, whose three-way designs offer a more subtle, nuanced sound.

But the SoundCore’s biggest weakness is in the bass department. Much of this is by design – Roth has tuned the unit to be less ‘in-yer-face’ than most soundbases to avoid sounding boomy and fatiguing, which is an admirable approach but leaves the sound lacking depth and scale when playing big action scenes.

Godzilla’s footsteps don’t make the deep, thumping impact we expected, and it chuffs a little when handling the deep sub bass of the MUTOs’ electromagnetic pulses. By underplaying the bass, it also brings more attention to the mids and treble than we’d like – we tried balancing it using the dedicated controls, but even the highest bass setting doesn’t quite hit the spot.

To be fair, there is a decent amount of bass here – just not enough to truly satisfy, and certainly not enough to challenge the rich, room-filling sound of a Canton or Tannoy. So if you want to experience a movie’s deepest, punchiest bass notes then you need to pair this unit with a decent subwoofer, which might be more hassle and clutter than you want but at least Roth gives you the option.

On a more positive note, Roth’s decision to voice the unit for ‘24/7’ listening means it’ll handle blockbuster movies as comfortably as day-to-day TV shows. You can flick between Transformers and Top Gear without having to constantly fiddle with the settings, but if you want a little more vocal clarity the News preset does an excellent job.

Roth’s Music setting also deserves kudos, as it brings a smooth yet engaging character to our favourite test songs beamed via Bluetooth. From the delicate beauty of The Man With The Child In His Eyes by Kate Bush to the uptempo funk of Incognito’s Rapture, the Roth captures their respective moods and rhythms more convincingly than you’d expect a soundbase to – and the understated bass actually works better in a musical context.

Should I buy the Roth NEO 6.2 SoundCore?

The NEO 6.2 SoundCore is an impressive soundbase in many ways, not least because it offers a generous feature list and the best set of sockets we’ve ever seen. Its silver/black colour scheme is devilishly handsome and we love the improved remote.

And for the most part, its performance is also impressive. The lively, dynamic sound brings drama and excitement to movie soundtracks, while the crisp detail, clear dialogue and expansive Movie setting make for an engaging listen.

But those of you craving deep, room-filling bass will be disappointed. Admirably, Roth has gone for a sophisticated, palatable sound that doesn’t sound boomy or fatiguing, but in doing so it sacrifices punch and scale when playing big action scenes, as well as making the sound a tad unbalanced.

Thankfully, it’s easy to add a subwoofer, but those who don’t want the extra clutter, hassle or expense might be better off investigating the Canton DM50 or Tannoy BaseStation One, which deliver a bigger, bassier and more finessed sound without a sub.

With the best connectivity on the market, plentiful features, an eye-catching design and dynamic sound, Roth’s NEO 6.2 SoundCore is a fine soundbase debut, but bass lovers will need to add a subwoofer.