Playing around with glasses-free 3D one more is fun for a while, but it doesn't make this phone worth a buy

What is the Rokit IO Pro 3D?

The Rokit IO Pro 3D is a type of phone we have not seen for almost a decade. It has a 3D screen, can take 3D photos and doesn’t need any glasses to show off its 3D effect.

Its timing is strange. 3D is no longer seen in TVs. 3D cinema screenings seem to get rarer by the year. And even the most successful 3D gadget ever, the Nintendo 3DS, is only available in its 2D form these days.

Until you try it in person, 3D content seems like it should be the future. After a half-hour you quickly come to the conclusion it isn’t. The Rokit IO Pro 3D doesn’t change that, or offer a three-dimensional experience we haven’t seen before.

As such, it’s a dud. But the underlying phone is acceptable and the £250 price surprisingly friendly if you just love the idea of a 3D phone. 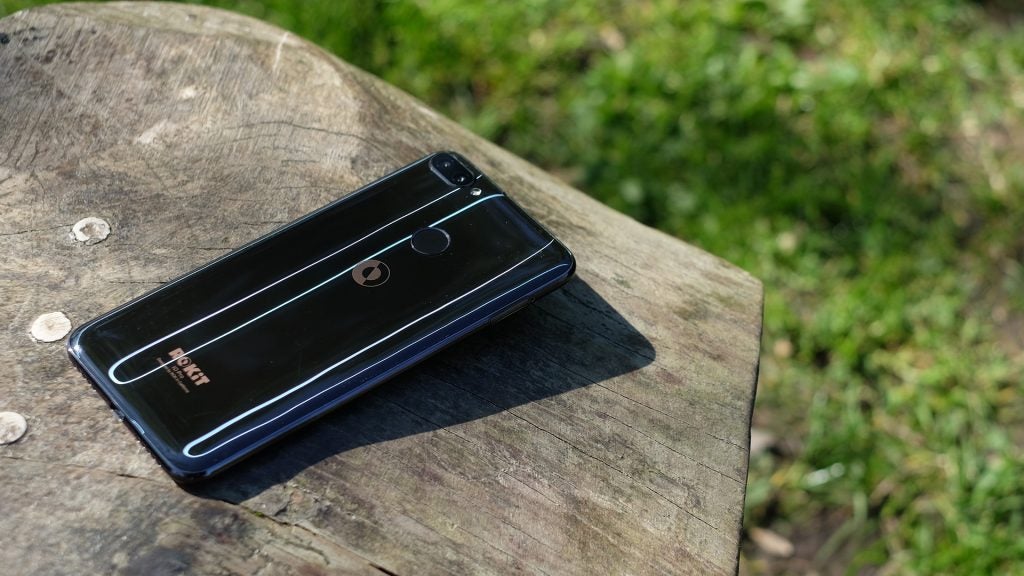 Only one element makes the Rokit IO Pro 3D interesting: its 3D screen. Rokit says its tech is patented, and therefore “unique” in certain respects. But the experience of using it is actually quite familiar.

The Rokit IO Pro 3D can only show 3D content when on its side, and it uses a parallax barrier to make sure your left eye sees a different image to your right. A parallax barrier is a clever filter in a screen that blocks of certain parts based on the viewing angle, so no 3D glasses are needed.

Most of the content you’ll see on this phone shows object dipping into the display, but it can handle those that appear to poke a little out of it too, towards you.

There are a few issues, though. Content is perhaps the most crucial. You’ll find a lot of 3D videos on YouTube, but they won’t play in 3D on this phone. Netflix used to have 3D content, but this was switched off by 2016.

To watch in three dimensions you have to use the Rokit 3D app. This is like a micro version of Netflix, with content made just for Rokit phones. It is not very good. You actually have to download videos before they’ll play, the app is slow to navigate and sometimes clips refuse to play, usually when another is downloading.

The content catalogue at launch is pretty poor too. There’s some “Rokit studios” clips, and a handful of mini documentary style videos about topics like nature and space. It oscillates between demo reel stuff and simply fairly poor content that is not very appealing

We, as the gadget-loving public, reached the verdict people don’t really want to watch good stuff in 3D. So why would they want to watch bad stuff? The app also has a “store” section, suggesting you’ll have to pay for some videos soon enough.

There are no 3D games, and no prospect of any. And while the Rokit IO Pro 3D has a funky live wallpaper that shows our planet wheeling about in space, the phone can’t actually show this in 3D because the effect only works in portrait. And with specially made content.

The Rokit IO Pro 3D’s screen also makes “normal” images look worse. This is a large 5.99-inch 2160 x 1080 pixel LCD screen, but thanks to the parallax barrier it ends up looking around half as sharp as its actual resolution. Pixellation is quite obvious.

Edges of small text characters seem to shimmer at times, again because of the architecture of the screen. A 3D screen is a bit of a gimmick. And while it’s not a hugely expensive one in terms of money you pay, the cost in other areas in significant.

The Rokit IO Pro 3D also cannot compete with the best normal phones at the price in terms of design either. This is a plastic phone, aside from the glass covering the screen. The back looks a bit like glass, but is plastic. The sides are too.

This phone looks and feels a little cheap next to the Moto G7 Plus. It’s no surprise, but is another reminder the 3D feature isn’t a “might as well” extra. You do pay for it, even if the fairly accessible price does not make this clear. 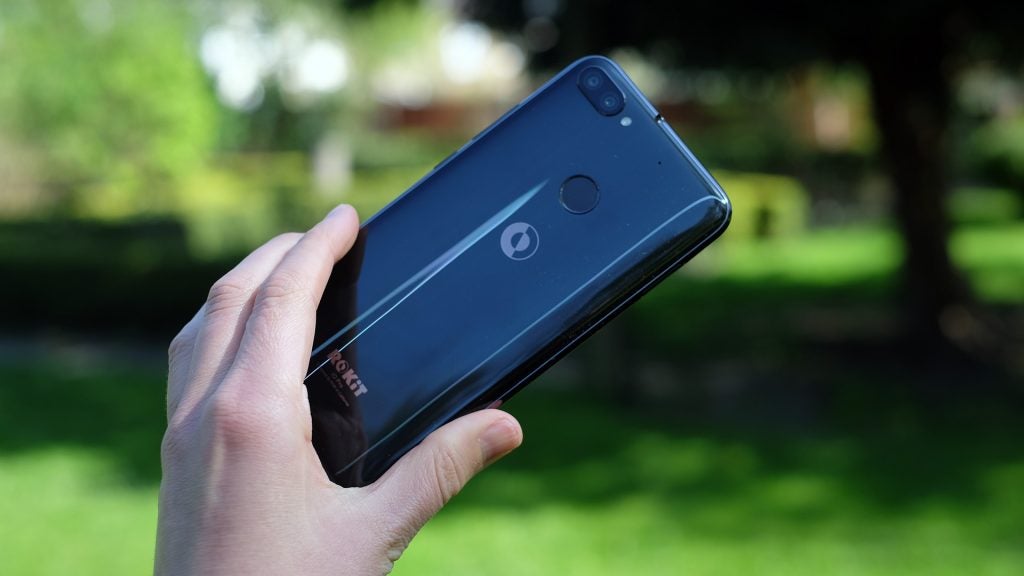 Some key parts of the phone seem out-of-date already too. The Rokit IO Pro 3D has a microUSB socket rather than a USB-C, and the software is Android 8.1 rather than 9.0.

These are not a good fit for a phone that wants to seem cutting edge. Expecting major software updates from a small company little Rokit seems optimistic too. 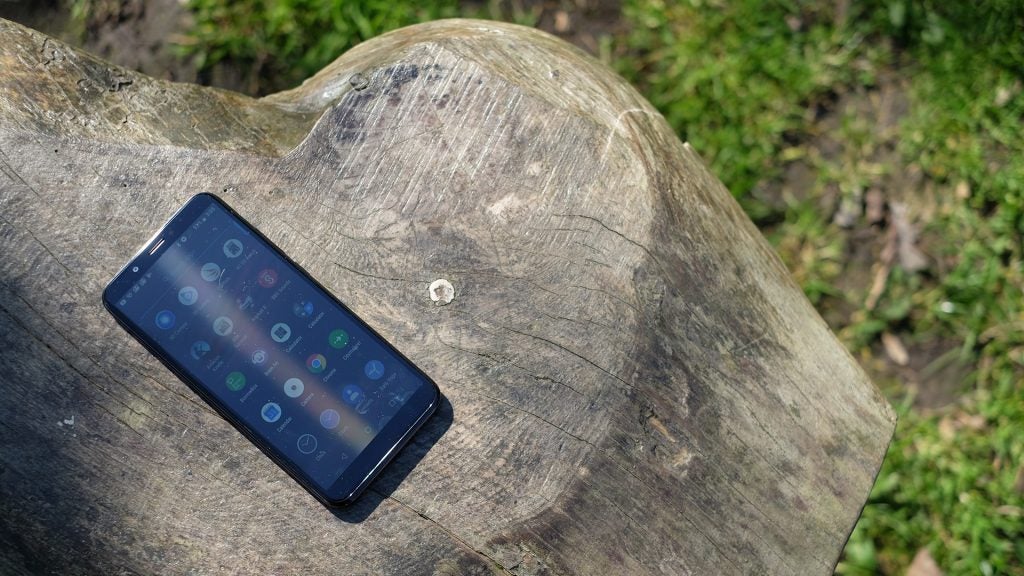 However, it’s not all bad. The Rokit IO Pro 3D has a custom Android interface, but it’s not an annoying one with lots of features desperate to stand out. It feels like a fairly vanilla take on the system, but I’d advise getting rid of the spacey wallpaper. A normal one looks better.

The Rokit IO Pro 3D also has a modest, but ultimately adequate, processor. It’s the MediaTek MT6763, a chipset with eight Cortex-A53 cores and a dual-core Mali-G71 graphics chip. The CPU is also known as the MediaTek Helio P23.

It is not as powerful as most value-driven rivals around the same price. The Moto G7 Plus is far more powerful, in both its CPU and GPU, and so is the cheaper Honor 10 Lite. 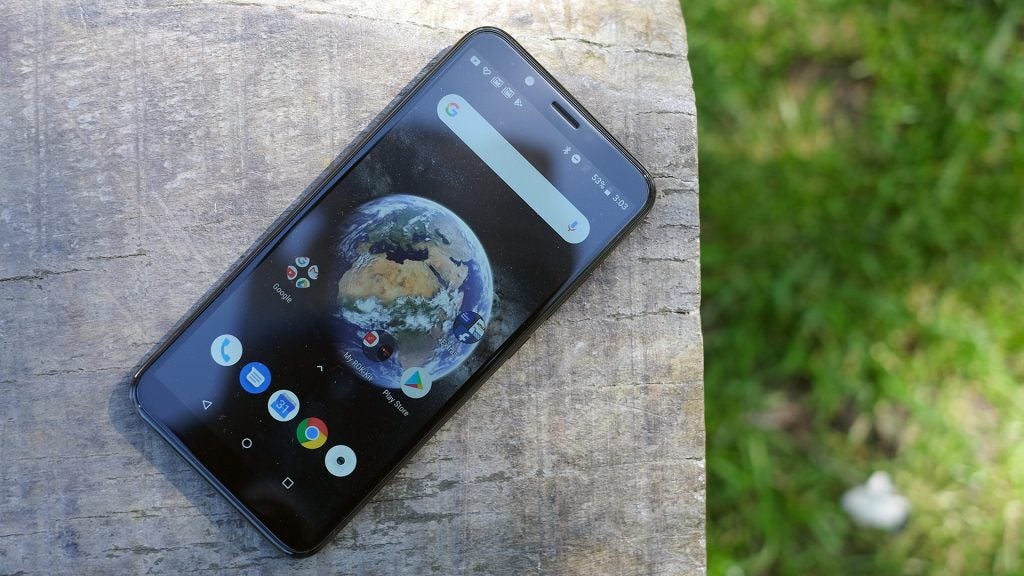 It’s no disaster, mind. The Rokit IO Pro 3D could be a little faster to load apps and the most demanding games work best when graphics settings have been cut down a little. Crucially, you do not have to wade through the lag seen in some lower-end MediaTek-powered phones.

Using this phone is, for the most part, a pleasant enough experience.

The just-good-enough mediocrity continues with the Rokit IO Pro 3D’s camera. It has a 13-megapixel main camera with a 2-megapixel depth sensor on the back, and an uninspiring 8-megapixel selfie camera. 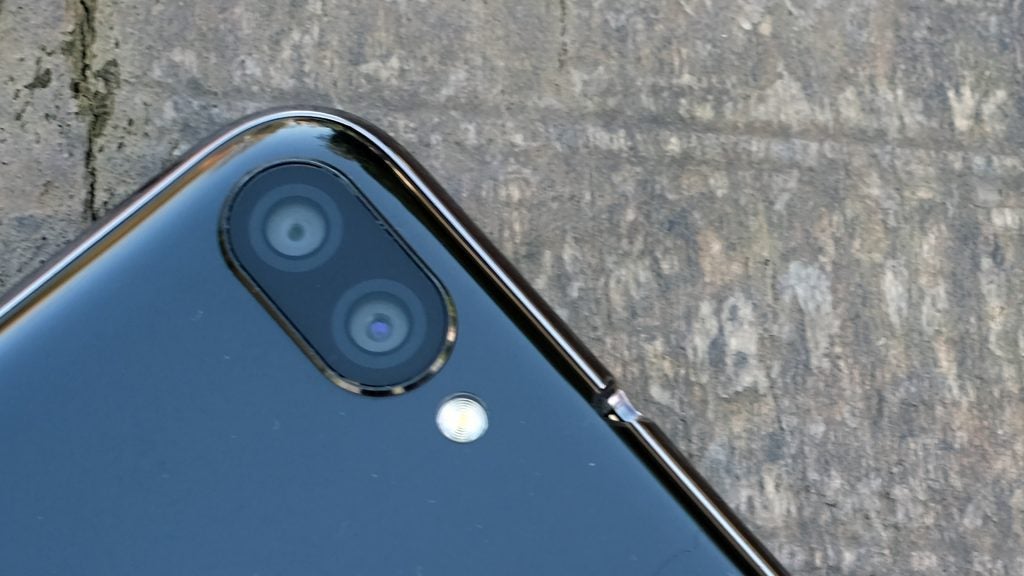 Its main camera app is unusually stripped-back, with almost no additional modes or features. During the day picture quality is fair. But the trappings of the best affordable cameras are missing. There’s no clever HDR processing to max out on shadow detail and avoid overexposure. Night images tend to look quite noisy, as again the processing simply isn’t that smart.

Like the CPU and performance side, the camera could be a lot worse. This is not a bad sensor. I’ve seen much less capable 13-megapixel cameras. You can simply get better pics for your money, from almost every other half-decent phone at the price.

The Rokit IO Pro 3D does have a special move. It has a separate camera app that takes 3D photos instead of normal 2D ones. This is the second 2-megapixel camera’s purpose.

It creates a basic depth map so the 3D screen can do its thing with your photos. The effect is rarely that dramatic, though. Far-away objects never plunge that far into the screen. Near ones never seem that close. Much like taking 3D photos with a Nintendo 3DS, it starts to seem faintly pointless rather quickly. 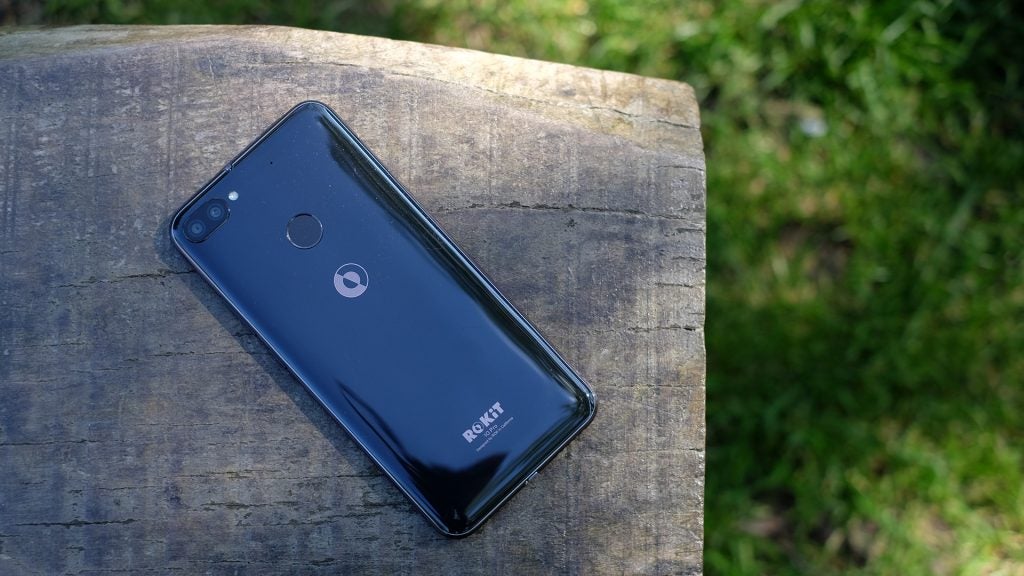 Pointless but mostly painless. That sums up the Rokit IO Pro 3D pretty well. And the battery life is another key part of avoiding the pain of a genuinely poor phone.

It has a 3850mAh cell, which has no trouble lasting a full day of moderate use. This is a larger battery than the Moto G7 Plus’s, and the Honor 10 Lite’s. 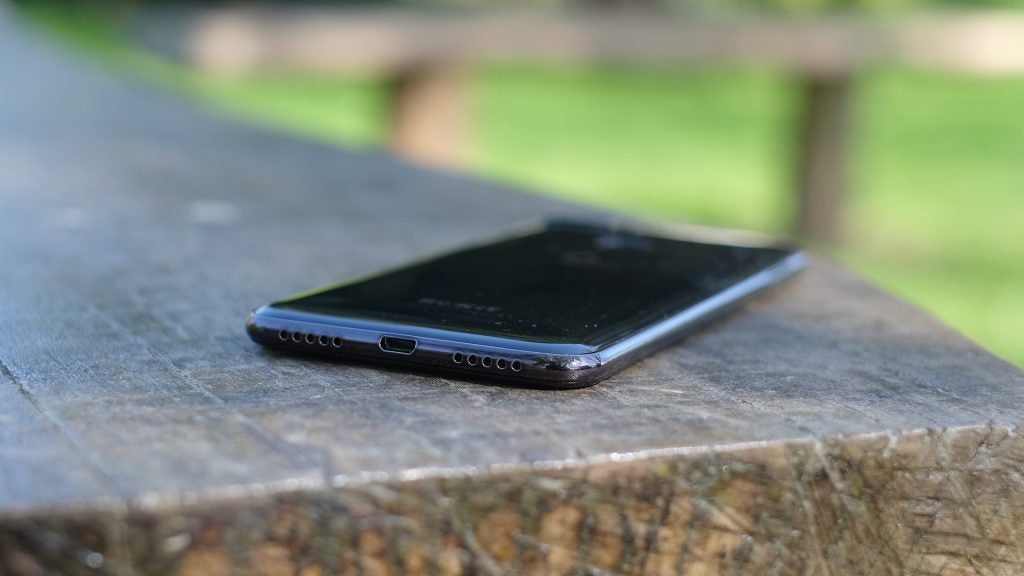 The choice to use above average battery capacity may be down to the added power drain of the 3D screen, which reduces the perceived brightness relative to the backlight intensity. However, a full hour of YouTube streaming (over Wi-Fi) only takes a fairly standard eight percent off the battery level. The display clearly is not power hungry enough to blast the benefits of a large battery cell. 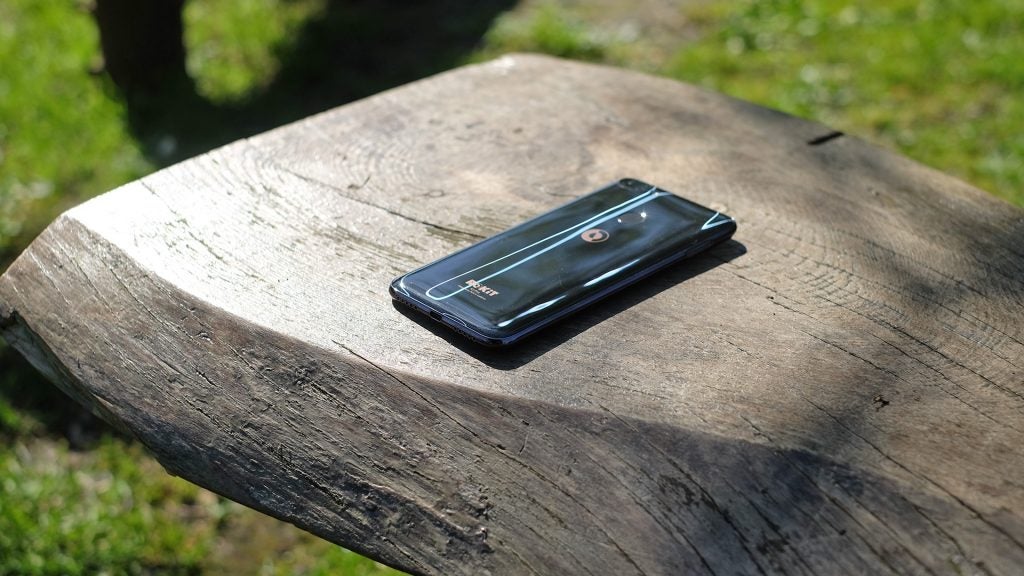 Should I buy the Rokit IO Pro 3D?

You probably should not buy a Rokit IO Pro 3D. The thrills of its 3D screen wear off quickly, and aren’t as good as you might hope for in the first place.

This entire phone is a little baffling. 3D has already died several times, including in phones. A couple of the things were released in the west in 2011, and almost no-one bought one. There is no obvious technical progress made here to justify this slight return.

The basics beside the screen, like performance and battery life, aren’t bad. But almost every other half-decent phone at the price is a better buy.

Related: You’ll probably want to pick up one  of these best cheap phones instead

Playing around with glasses-free 3D one more is fun for a while, but it doesn’t make this phone worth a buy