Available on Wii U (version reviewed), Nintendo 3DS
Well, there’s good news for Tomonobu Itagaki and the team at Valhalla Studios: Devil’s Third is no longer the worst Wii U game I’ve played all year. Rodea: The Sky Soldier is depressingly poor, not just because it’s inept on so many levels, but because it’s associated with Yuju Naka, the brains behind Sonic the Hedgehog. This isn’t Naka’s original Wii vision for Rodea but a badly handled Wii U port, and anyone looking for a game with the magic of Sonic 2 or the wonderful Nights might need to curb their enthusiasm. While Rodea has aspects in common with Nights, it’s hideously flawed. 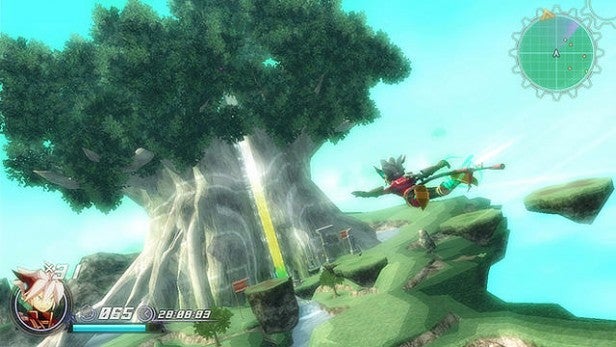 This is primarily a game of flight, featuring the eponymous android hero as he battles an evil empire around the plateaus, ruins and blue-blue skies of a magical floating world. The parallels to Nights come in the way you follow strings of floating coins, rushing along their straights and curves in high-speed swoops and dives, and in the way you can boost attack your way through baddies, hitting the B button once up close to smash into them and knock them out of the way. Rodea only has a finite amount of energy, running out of which proves fatal. You can replenish it by harvesting coins and items and eliminating foes, or boosting into the occasional checkpoint-registering bell.

The first big disappointment is the graphics. Rodea doesn’t look like a Wii U game. Even in the days of the Gamecube and PS2 it would have been considered sub-par. The landscapes are sparse, textures bland and filtered out beyond all recognition in a way that brings to mind old N64 games. The architecture is primitive and blocky, and the monsters amongst the dullest and ugliest I’ve seen in recent years. Draw distances are pitifully small. A game of flight needs spectacle, like a Panzer Dragoon or a Kid Icarus: Uprising. Throw in generic character design, and Rodea simply doesn’t measure up. 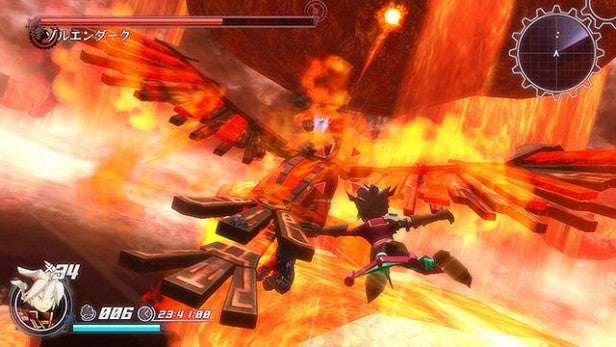 Poor visuals we can live with if the gameplay is fantastic, but here Rodea makes things even worse. Our hero can’t just fly in any direction. Instead you leap into the air, press the A button to pause in-situ, then quickly use the right-stick to move the camera and the left-stick to get a cross-hair on an object or target in the frame. Pressing A sends you speeding towards it, while B kicks in that all-important boost. Even in the game’s most leisurely moments, the whole control system is awkward. Once the action heats up it’s practically unworkable. With practice you learn how to follow the coin trails and get from A to B without running out of energy, but even after several hours of play I still found myself cursing the sky soldier’s handling. Where we needed grace and fluid motion, we’ve ended up with an unfortunate cludge.

This wouldn’t be a problem were the design more sympathetic, but it’s not. A few levels in, homing missiles start zooming in from nowhere, and while they’re accompanied by an irritating noise the awful camera makes it impossible to work out where they are until they hit you. Similarly, once on course towards a target it’s very difficult to stop – a nightmare when you start encountering nasty, floating fish-style enemies with pop-in, pop-out spikes. You’re given guns to wield against some foes, but targeting is a nightmare. There are numerous missions that ask you to collect three or five items, but even with the aid of the mini-map and huge, great markers, it’s surprisingly difficult to track them down. 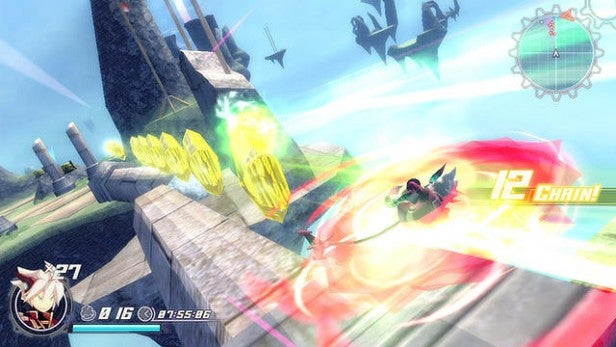 For brief moments Rodea had me feeling that I was finally getting the hang of it, and that the action was about to take off.
There’s a certain amount of charm to its story, even if the straight-laced android hero and perky girl mechanic sidekick are as clichéd as gaming heroes come.  I had hopes that an upgrade system would boost Rodea’s offensive and defensive capabilities, and make the game’s faults easier to stomach, and there are some moderately impressive boss battles hidden in the game. Sadly, however, it only becomes more of a struggle to work your way through each successive mission, and when the worlds themselves are so tired, so free of spectacle and invention, it’s hard to find the will to go on. I persevered because I had to, but if I’d bought the game I would have given up long before.

Apparently the original Wii version, which used the Wii remote to control Rodea, was both a more enjoyable and more aesthetically-pleasing game. I’m also told that this version, never released over here, comes bundled with the retail version of the Wii U game. Perhaps it makes good on the glimmers of promise you occasionally spot while playing this Wii U monstrosity, but based on this version only it’s nigh-impossible to recommend this game.

Verdict
You can see the potential in Rodea’s high-flying, swooping, soaring gameplay, but it’s all squandered by the woeful visuals, poor design and terrible controls. The Wii U might be short of quality games this winter but you’d have to be pretty desperate to buy this.