Rocksmith 2014 is to Rocksmith what Guitar Hero 2 was to Guitar Hero; a sequel that improves on an innovative but imperfect first effort with a host of fixes, a grab-bag of enhanced and added features and a better structure. When we reviewed Rocksmith last year we thought it was – with a few caveats – a great game and an enjoyable way for anyone to learn guitar or bass. This year we feel the same, but with most of those caveats removed.

In its fundamentals, the 2014 edition isn’t much different from last year’s model. Rocksmith 2014 is still as much a learning aid as a game, and one that works not with some dodgy plastic gadget or an expensive customised guitar, but with any guitar or bass you own or buy. Yep, it doesn’t matter if you plug-in a ropey Stratocaster copy, an embarassing eighties hair-metal Charvel or a much-loved Gibson Les Paul – as long as your guitar can stay in tune and the intonation isn’t dodgy down the neck, it will work with Rocksmith 2014. All you need is the cable provided with the original Rocksmith, or with Rocksmith 2014 if you buy it in the bundle pack. 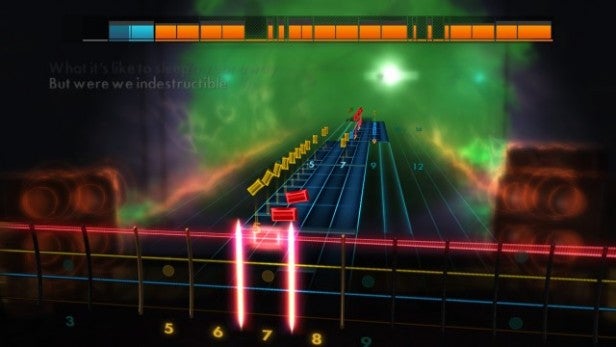 Rocksmith 2014 still plays like Guitar Hero with a real guitar. Markers representing notes and chords roll down the scrolling tablature highway towards you, and it’s up to you to hit them as they cross the bottom line. However, where Guitar Hero uses a specific subset of notes and chords for each difficulty level, Rocksmith 2014 intelligently adjusts what it’s asking you to do, starting with a small selection of root-notes and melody notes that barely sketch out the outline of the song, and scaling up until you’re playing every chord, every grace note and every bend and widdle of the solo. What’s more, it’s a stickler for accuracy – you’re not just expected to hit the right notes, but the right bent notes, slides, pull-offs and hammer-ons, just as they’re used in the original version of the song.

Let’s not pretend that the system is perfect. Rocksmith 2014 is a more visually polished game than the original, with a reworked display and stronger visual cues, but at times it’s still bewildering, making it more awkward to learn, say, the chord sequence in Bob Dylan’s Knocking on Heaven’s Door than it would be if you simply grabbed the chords from a chordbook. If there’s anyone out there with a mind agile enough to take in the blur of blocks and shapes that is the intro to Rush’s Spirit of Radio, then we need to move them on to more important tasks like curing cancer or fixing the global economy. 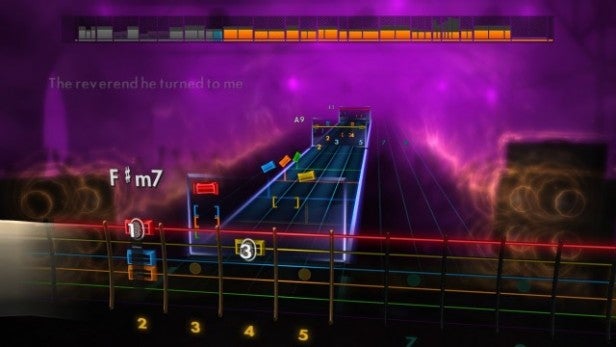 The AI system sometimes fails to make things easier when you’re struggling with a sequence or make things tougher when you’re flying, and it still seems a little counter-productive to learn arpeggiated chords (chords you hold and play note by note rather than with a single strum) as single notes when you’re learning a new track. Yet the more you get accustomed to the interface, the colour coding of the strings and the indicators for moving up and down the neck, the more it all becomes natural. Put enough time into a reasonably simple track and you’ll eventually learn how to play it. The more tracks you play, the better you’ll get.

Rocksmith 2014 also makes its Instant Riff Repeater function more accessible and genuinely useful, so that you can pause the action at any time and replay a section, turn the difficulty up and down, slow-down a section or practice more or less of the song. You can work on nailing a riff or go over the whole first verse and chorus – it’s up to you. The revamped feature is hugely customisable, and makes learning tricky chord sequences or solo runs a whole lot easier. 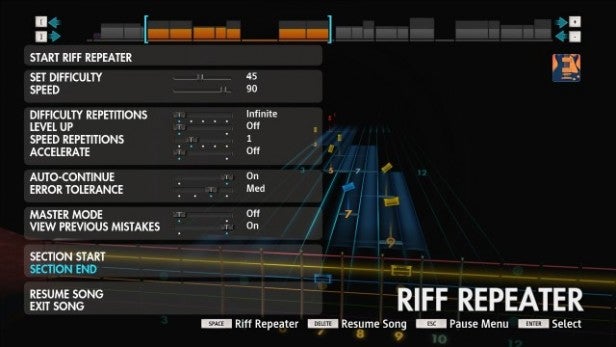 Where Rocksmith 2014 really moves on from Rocksmith isn’t in the minute-by-minute gameplay, but in the structure and the features that support it. Rocksmith used a slightly artificial Journey, where you learnt a sequence of songs before playing them in a single performance. Rocksmith 2014 ditches this in favour of a focus on individual songs and on missions – simple objectives that might be as basic as tackling a song in a different tuning, hitting a certain accuracy level on any song or playing through one of the game’s many lessons. Complete a mission, you gain points and potentially level up, and the game recommends another one to tackle.

In a way, the Journey mode is missed. There’s no obvious route through Rocksmith 2014 bar doing missions, gaining points and levelling, and it can be confusing where to go next. Yet the new structure allows you to concentrate on a specific song, improve facets of your playing or simply drift from track to track in any order you please.

Within every song you’ll also find new objectives, and they all feed into a central experience point and level tally. It’s a more organic approach, and one that has advantages: you’re never forced to play a song you don’t like or struggle on with a stretch you can’t play. You can play – and learn – at your own pace. 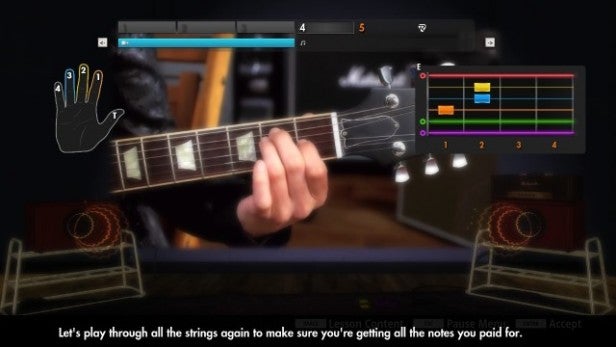 Just as importantly, Rocksmith 2014 does a better job of supporting you as you do so. The built-in tutorials, for a start, are much improved, with clearer videos, better tablature and well-designed interactive sequences that help you with the basics, check your progress than integrate what you’ve learnt into a short practice song. Specific songs will push you onto one tutorial, while others are linked to as missions, helping them feel a more integral part of the game.

Meanwhile, Rocksmith 2014’s Guitarcade has got bigger and better, with a wider range of retro-themed arcade games that build your sliding, bending and picking capabilities or help you learn your scales and chords. Some, like Ducks ReDux and String Skip Saloon, are ideal for novices finding their way around the fretboard or more experienced players wanting a firmer grip on Rocksmith’s own distinctive tablature.

Others, like Scale Warriors and Return to Castle Chordead, play out like full-scale arcade beat-em-ups or lightgun shooters, only with scale patterns and chords taking the place of conventional controls. The boss battles and cut-scenes make it look like the developers might have got carried away, but it’s a whole lot more entertaining than simply doing exercises from a video or book. 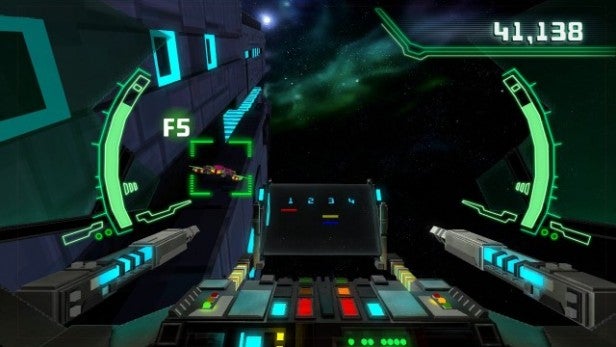 Yet Rocksmith 2014 isn’t done yet. First it takes the Amp mode of last year’s game and revamps it into an incredibly customisable tone lab with different heads, cabinets and effects. It then throws in the new Session mode, where you can set-up different combinations of drummers and drum sounds, keyboard players, bass players and rhythm guitarists, then run practice sessions where you play and your virtual backing musicians do their best to make it all sound good.

It sounds like a gimmick – and it is no substitute for jamming with a real band – but the effects are surprisingly convincing, and it’s the sort of thing that will give a lot of players confidence. After all, what leaves a lot of guitarists stuck in their bedroom is the fear of playing in front of other people. 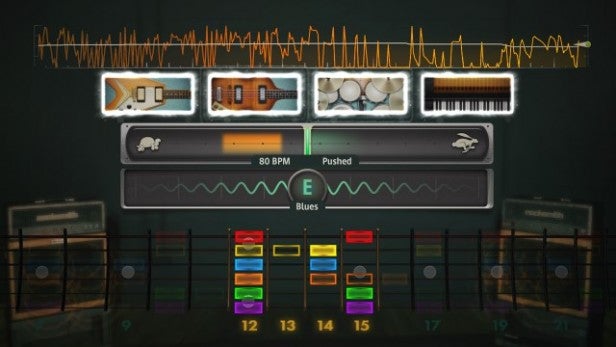 Other options let you play the game in alternative ways. If you’d rather not worry about missions and just play through a series of tracks, then Nonstop Play mode lets you do exactly that. You set up a playlist, set the length of time you want to play for, and Rocksmith 2014 smoothly cues up each song in turn with minimal delays in between.

Alternatively, you can switch to Score Attack mode at any time and play the game like a Guitar Hero or Rock Band, with a specific arrangement for each difficulty level, a high scores table and a three-strikes-and-you’re out policy. Some players hated the original Rocksmith because it kept on adapting to your playing rather than giving you a set yardstick to work against. Score Attack does a great job of addressing these complaints.

Put it all together and you have a game that builds on the strengths of Rocksmith and all but obliterates its major weaknesses (though we expect some players will still experience lag depending on their TV and audio system setups). We’re not suggesting that it will replace a real teacher – Rocksmith 2014 can’t watch your fingers or stop you picking up bad habits – but if you can’t manage tuition or you prefer a less personal approach, it’s a great way to go.

If we have any concerns, then they revolve around the tracklist. It’s mostly good and often great, with 50 tracks in a variety of genres, from classic rock (Dylan, The Who, The Stones) to alternative (Nirvana, Radiohead, Weezer, The Arctic Monkeys) to modern metal (Mastodon, Avenged Sevenfold). Yet we can’t help feeling that last year’s line-up was stronger on classics and wasn’t stretching itself quite so thinly in a desperate attempt to cover all the bases.

And while it’s a matter of taste, there seems to be less indie/alternative and more grumpy American metal this time around. Still, we’re told that there will be a mechanism to import tracks for the original game, while all existing and future Rocksmith DLC will be compatible with and even enhanced for the new game.

Rocksmith was a fine guitar game and a very useful teaching tool, but Rocksmith 2014 does an even better job of both, with clearer visuals, a better structure and some brilliant tutorials, skill games and practice modes. If you want to play guitar, we can’t think of a more entertaining and accessible way to learn.