What is the Roccat Ryos MK FX?

The Roccat Ryos MK FX one of the most robust, feature-complete gaming keyboards around – and isn’t excessively expensive. With RGB backlighting and a huge amount of macro customisation, it’s a serious gamer choice.

The design of the keyboard is the first thing that will draw the eye; this is a hefty piece of kit. The upside of that, coupled with the rubber feet underneath, means that this keyboard is going nowhere; not even the most animated of gamer’s rage is going to move this keyboard. 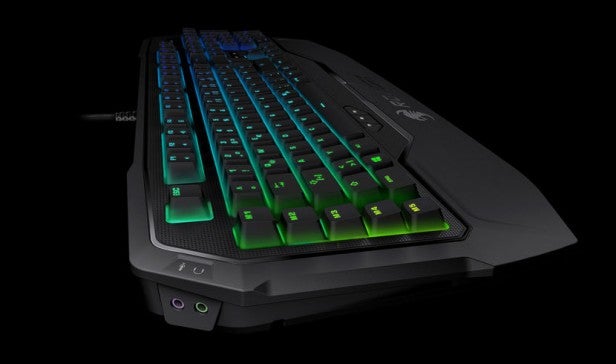 Part of that weight comes from the enormous wrist rest, something that at first glance looks exceptionally uncomfortable. I’m pleased to report I was wrong: extended periods of typing and gaming are comfortable, especially given the mammoth size of my hands.

The RGB backlit keys can be programmed with various effects using Roccat’s Swarm software, so crazy flashing effects and calmer pulses in all the colours you can think of are available in just a few clicks.

It’s nothing much beyond the prospect of mood altering ambience, but in the low-light conditions of a late night gaming session the softer colours are much more forgiving on the eyes.

You’re afforded a 1.8m braided USB cable with attached 3.5mm audio cables, which hook up to the two 3.5mm jacks on the top-left corner of the keyboard. Sadly, there’s no USB passthrough, which is something of a standard feature on higher-end keyboards and is particularly handy for both wired and wireless mice.

The keyboard is available with a variety of Cherry MX keys; my sample came with Red keys. They’re fairly loud, and if you choose to fit dampers to the keyboard you’ll block the LEDs, which is one of this keyboard’s main selling points.

The macro keys along the left edge are nice in theory, but the shape of the keyboard (coupled with their placement) meant I found I was consistently hitting them instead of left shift or left control keys instead of the macro buttons. It’s easy enough to get used to, though, and the MK FX offers a lot of extra keys within easy reach of the standard WASD claw that many of us adopt to play games. 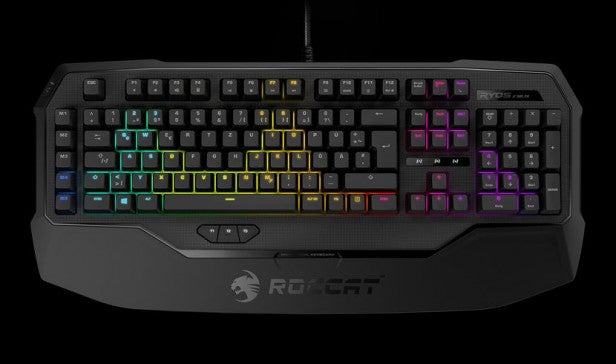 Even better are the smaller buttons just under the space bar, which are just a thumb hop away. These would be great for media buttons or super quick profile switches.

The Easy-Shift feature that you’ll see across Roccat’s keyboards allows you to program two functions for every button, and switch between as you play. It’s overwhelming, certainly, and those people who have never used a mechanical keyboard and shudder at the thought of customising macros might find this keyboard is far too much for them.

But if you know exactly what you’re doing and demand options, options and more options, the Ryos MK FX delivers in spades.

The Swarm software is superb and makes programming a little easier for those new to the process. Again, there’s nothing standout about it, but the Ryos MK FX ticks all the right boxes you would expect from a gaming keyboard at the cost.

Should I buy the Roccat Ryos MK FX?

The Ryos MK FX is chock full of features, with oodles of options and customisation available to even the pickiest gamer. The keys are spaced out enough that you won’t be smashing your Ultimate when you wanted to use your escape in DOTA 2, though the layout of the keyboard will take some getting to.

The cable is chunky and solid, as is the keyboard itself, and while it won’t win any prizes for its aesthetics outside of the colourful backlighting it does everything well.

If you’re after something more basic, the Corsair Vengeance K70 is a better bet: it still has excellent mechanical keys and great build but is much more simple in terms of layout, is £15 cheaper and comes with USB passthrough.

A multitude of options make the Ryos MK FX the perfect choice for the macro-obsessed gamer.