The Roborock S6's excellent vacuuming performance plus generous battery redefine what you can expect from a robot vacuum with a mid-range price.

The Roborock S5 was one of our favourite vacuum cleaners, delivering the quality of clean we’d expect from a much more expensive cleaner. The company is now back with the Roborock S6, which still has an impressively low price but builds on the S5, adding in advanced map control – including no-go zones – and a huge battery.

A few niggles concerning map control and the manual dispensing of water for the mopping detract slightly – but at this price it’s hard to complain.

Roborock S6 – What you need to know

Mapping gets smart with the Roborock S6, although control can be fiddly

The Roborock S6 is designed to be smarter than its predecessor, which means far more control of the map via the Mi Home app. Well, that’s once you’ve turned on the Map Saving mode, which is buried a couple of levels deep in the Settings menu. 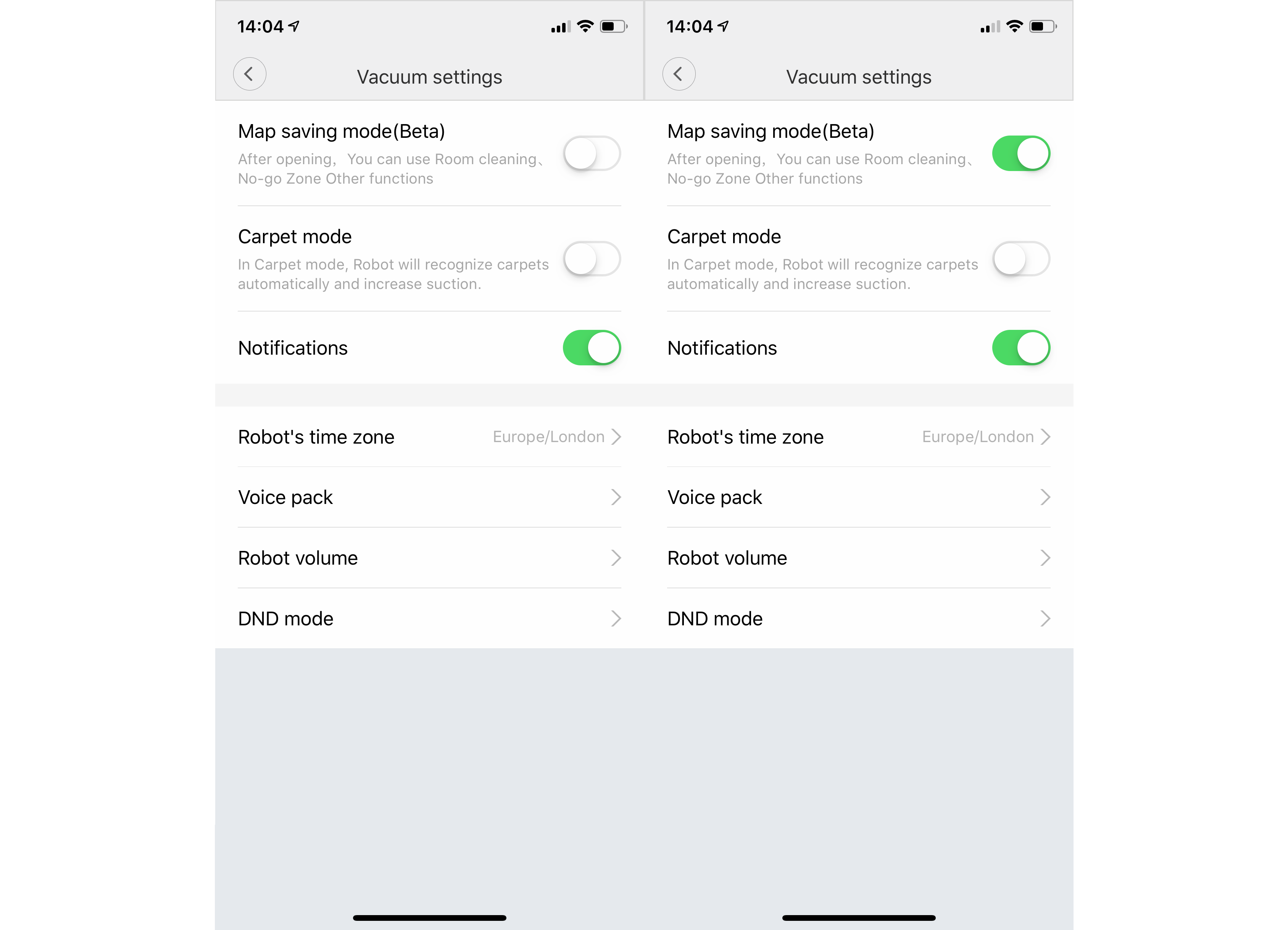 With this option on, the Roborock S6 remembers where it’s been and will even zone your home into different rooms, so you can clean a single room when you need to. If you prefer, you can segment the discovered rooms using the slightly fiddly on-screen controls. Why, you might ask, would you do this? Well, it makes for simpler cleaning. For example, segmenting my kitchen into dining and cooking zones, I could quickly get the S6 to clean up after preparing food, without having to do the entire room.

As well as room-by-room control, the S6 also lets you set a specific zone to clean, letting you mop up a particular mess easily. It’s this level of flexibility that ups the S6 into a higher and smarter category of cleaner. 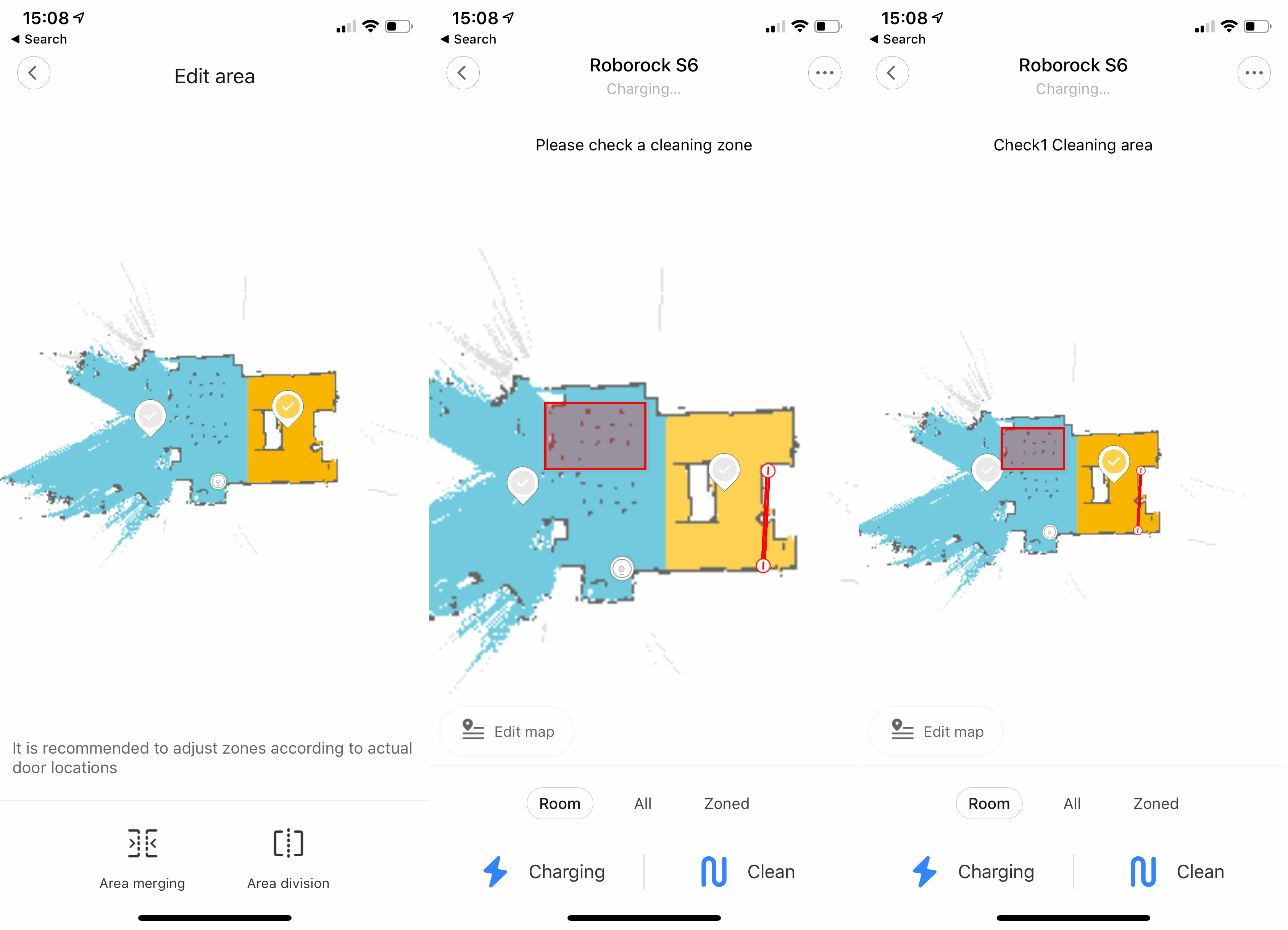 Control of the map also extends to the ability to add no-go areas. The app lets you define simple barriers, to prevent the S6 from entering a room, say, and entire zones. No-go areas and barriers are accurate enough for most uses, although if you have a delicate bit of furniture that you don’t want touched then I’d recommend making the zone a little larger to be on the safe side. 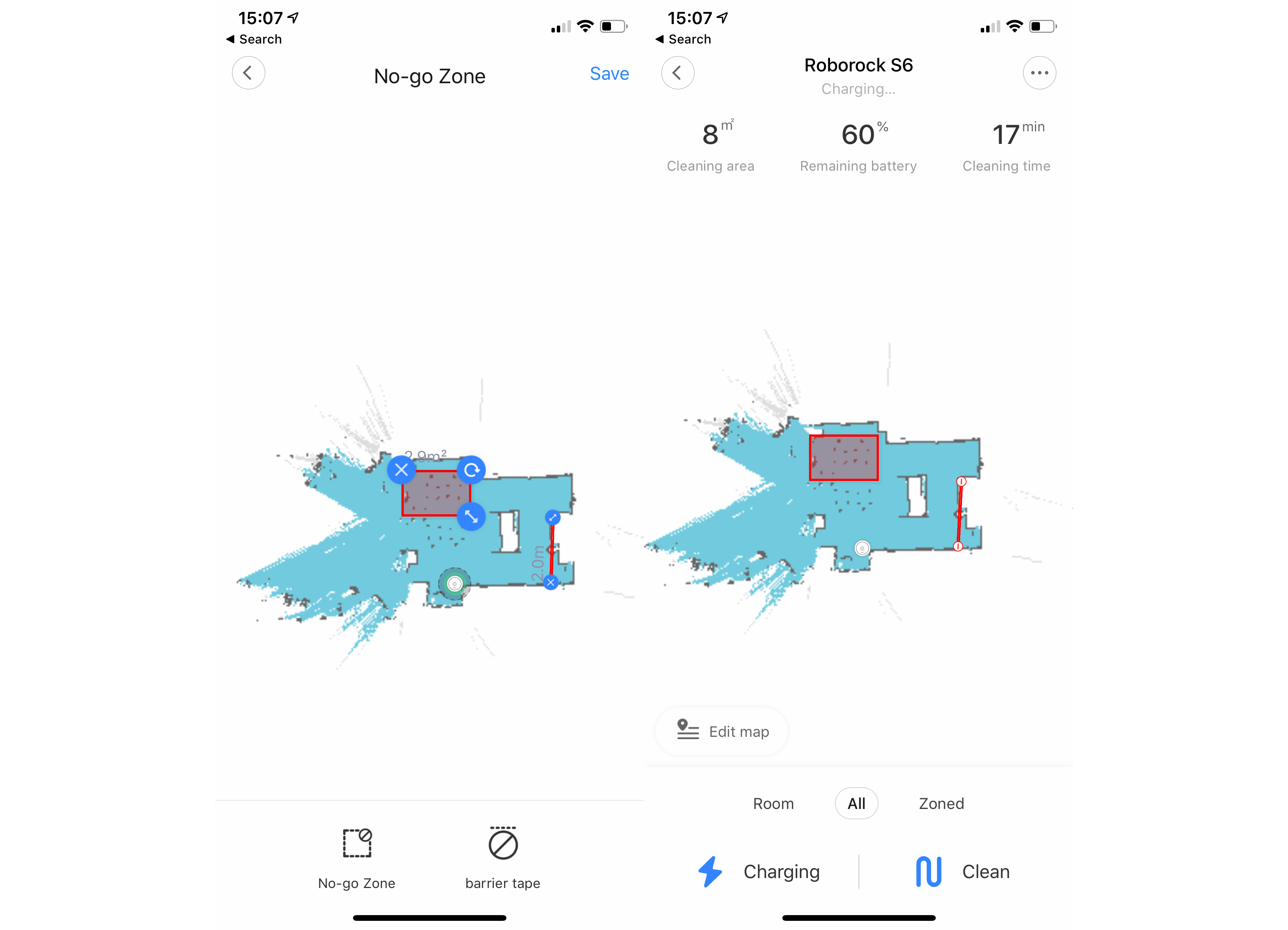 Once a map is in memory, the S6 can take a smarter route around the area, ensuring it’s covered the entire ground in the best way possible. Testing the cleaner out, it ably managed to move around my kitchen without getting stuck. The gap between my dining chair legs proved a little narrow for the robot to move through, but it went around to avoid becoming stuck.

If you move the robot into a new area that it doesn’t recognise, a new cleaning cycle is started. The map is then restored when the robot is put back on its charger. That’s good news, since it makes the S6 a flexible product that you can place where you want it.

The Roborock S6 is a powerful cleaner on hard floors and carpet, with a long battery life

As useful as the map options are, it’s the quality of cleaning that really counts. Roborock quotes a massive 2000pa of suction for this cleaner on its most powerful Max setting. There are Turbo, Balanced and Quiet modes, each with reduced power. 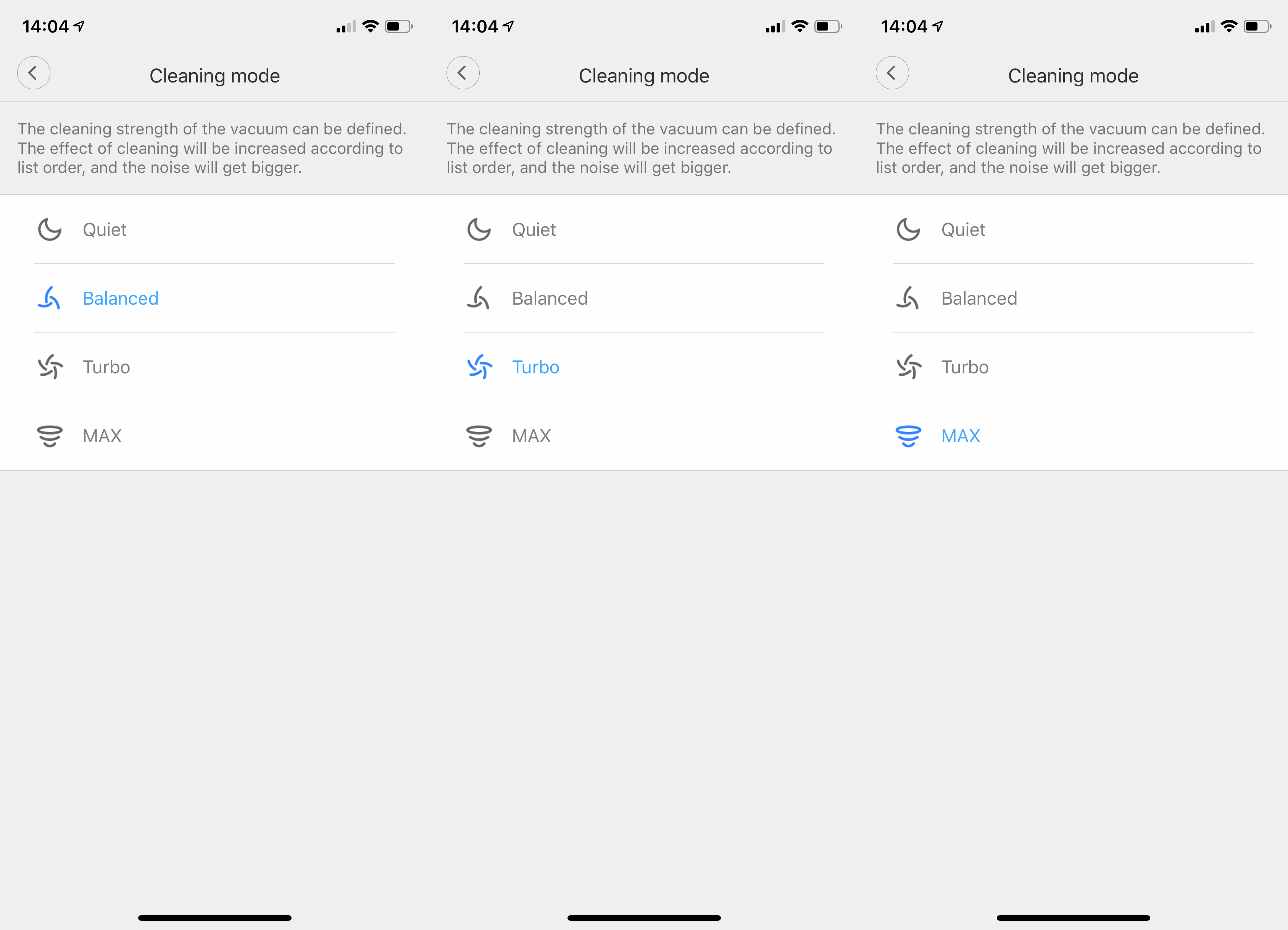 I left the vacuum cleaner set to Balanced mode and turned on the Carpet Cleaning mode, which ups power when the Roborock S6 detects  it’s on the surface. Running around my test room, the cleaner managed to pick up practically all traces for dirt at the centre of the hard floor and at the sides of the room. That’s impressive considering there’s only one side brush to sweep the dirt in from the edge of the room. 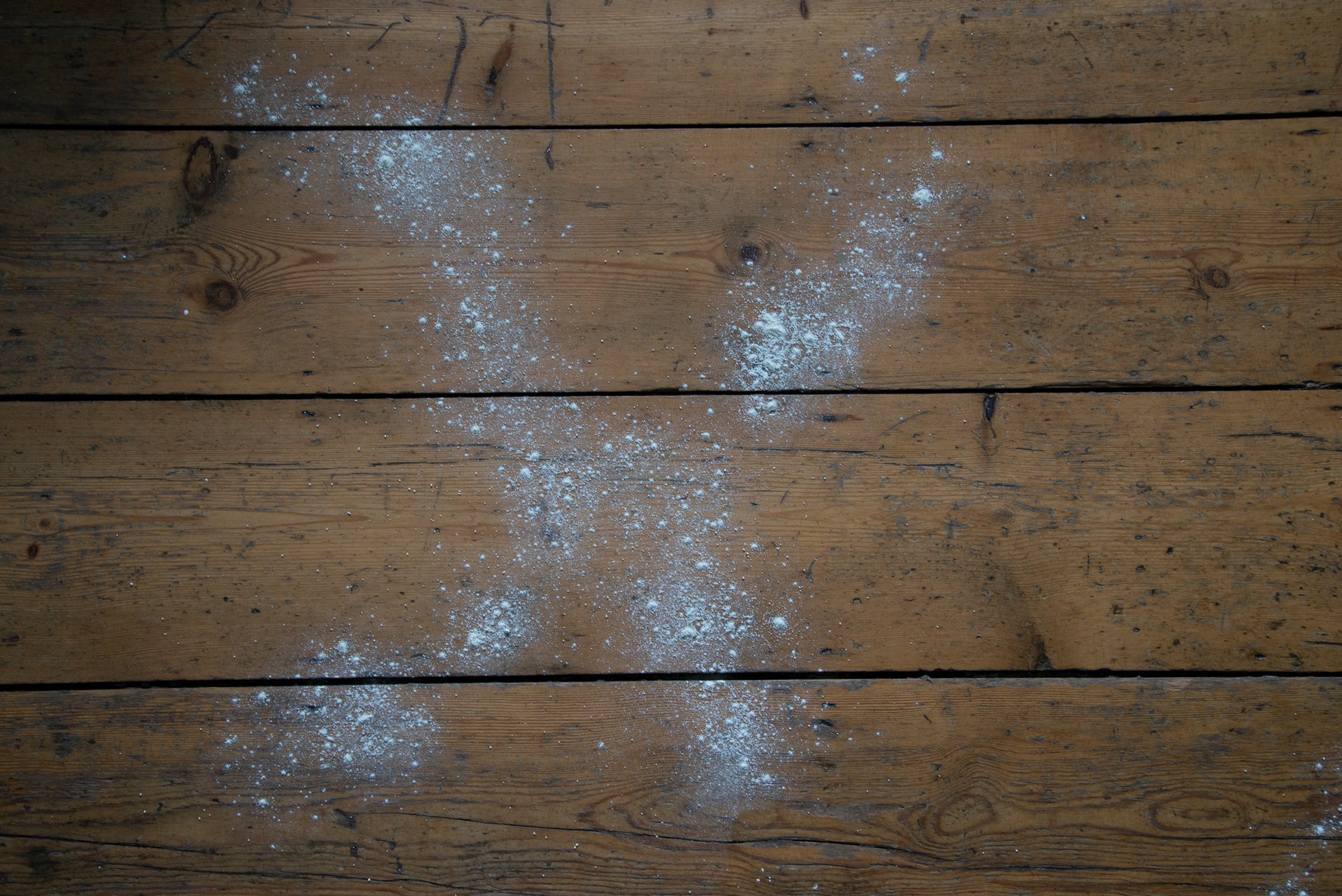 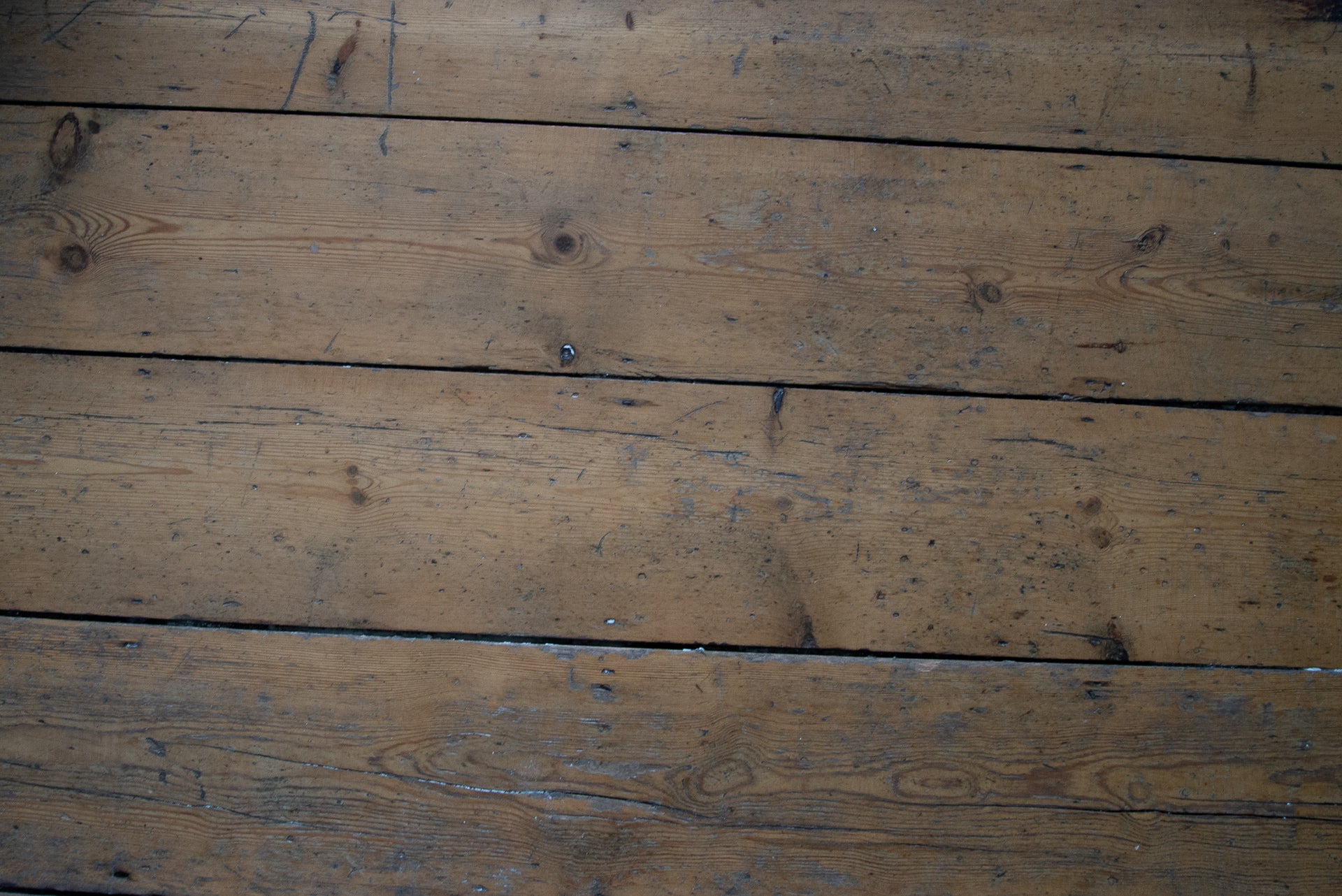 On carpets, the performance remained impressive, with the rotating brush bar agitating the dirt and letting the S6 suck up the majority of the spill. I’ve seen far more expensive cleaners do a worse job; the Roborock S6 is up there with the best of them.

Even though cleaning performance is excellent, the Roborock S6 is super-quiet: I measured it at 56.7dB standing above it. That’s so quiet that you’ll have to really listen out to hear it if it’s running in another room.

Impressively, the Roborock S6 has a massive 5200maAh battery, which the company says will last for up to 150 minutes on Quiet mode. Effectively, it should mean that most homes can have a floor cleaned on a single charge; if not, the S6 can return to its dock mid-clean and charge itself up.

Amazon Alexa support is available via the Roborock skill (not the Mi Home skill). This provides very basic control over the robot: turn on or turn off. More granular control would be nice to see, including the option to send the vacuum back to its charging dock or just pause. It would be good to see Google Assistant support, too.

The brush bar, side brush and filter will need changing every six months or so. Based on the Roborock S5, replacement parts should cost around £20.

Once the 0.48-litre dustbin is full, it lifts out of the S6’s main body and opens up to be emptied. You can get most of the dust out this way, but the occasional rinse under a tap wouldn’t go amiss and will ensure the robot is kept nice and clean. If the brush bar becomes clogged with hair, there’s a handy razor tool to cut away the mess, and the brush is detachable at both ends to make removing hair easier. 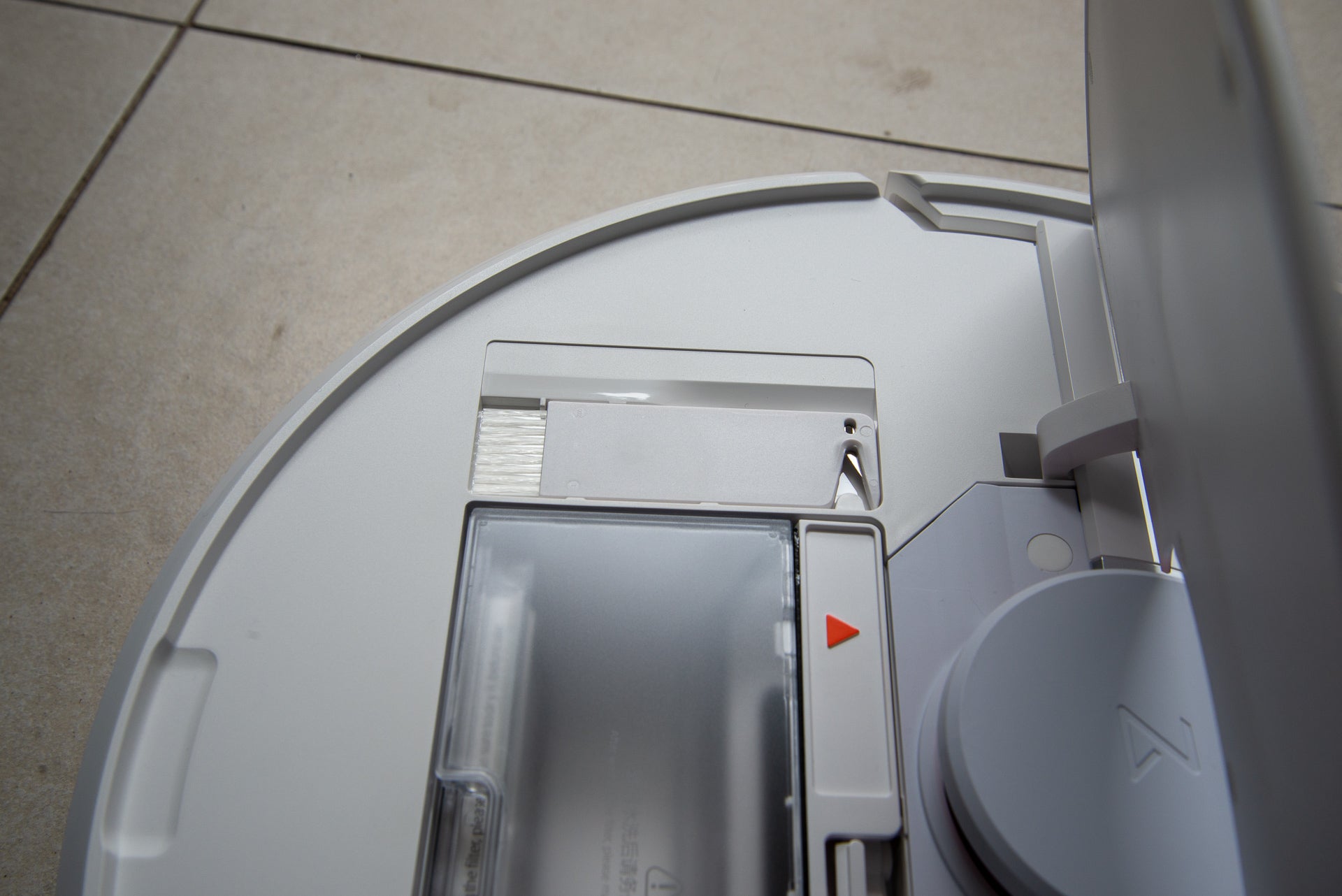 The Roborock S6 can mop, but performance is basic

The Roborock S6 can also mop, shipping with a water tank and a choice of microfibre cloth (two are in the box) or disposable mopping cloths (you get 10 in the box). As with Roborock’s other robot mops, the S6 uses a gravity-fed system for wetting the microfibre cloth. There’s a switch to control how much water comes out, with two positions. 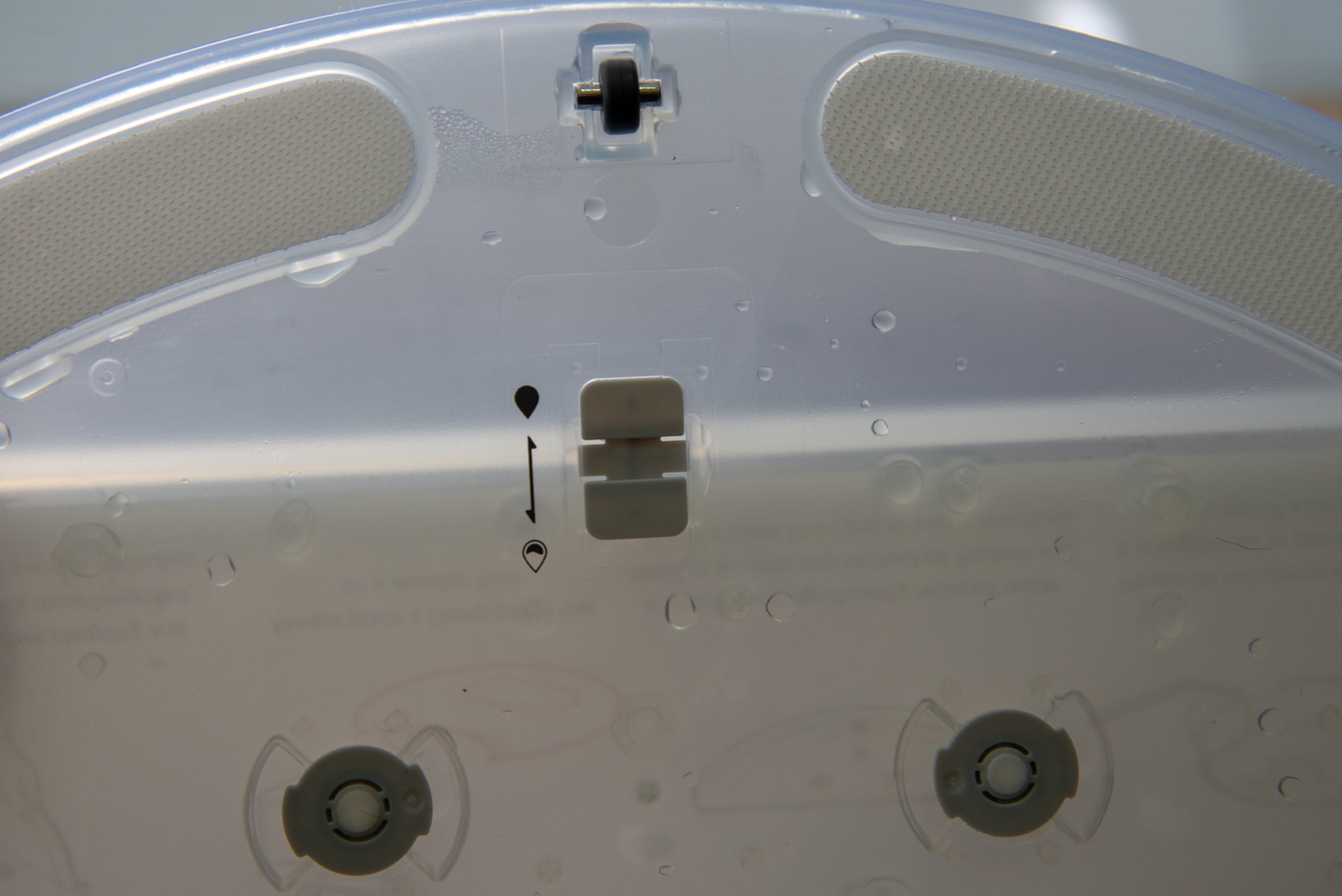 On minimum, the floor becomes only slightly damp to the touch, maximum puts out more water and makes your floor damper. It would be nice if this control were in the app, as with the Ecovacs Deebot Ozmo 930. 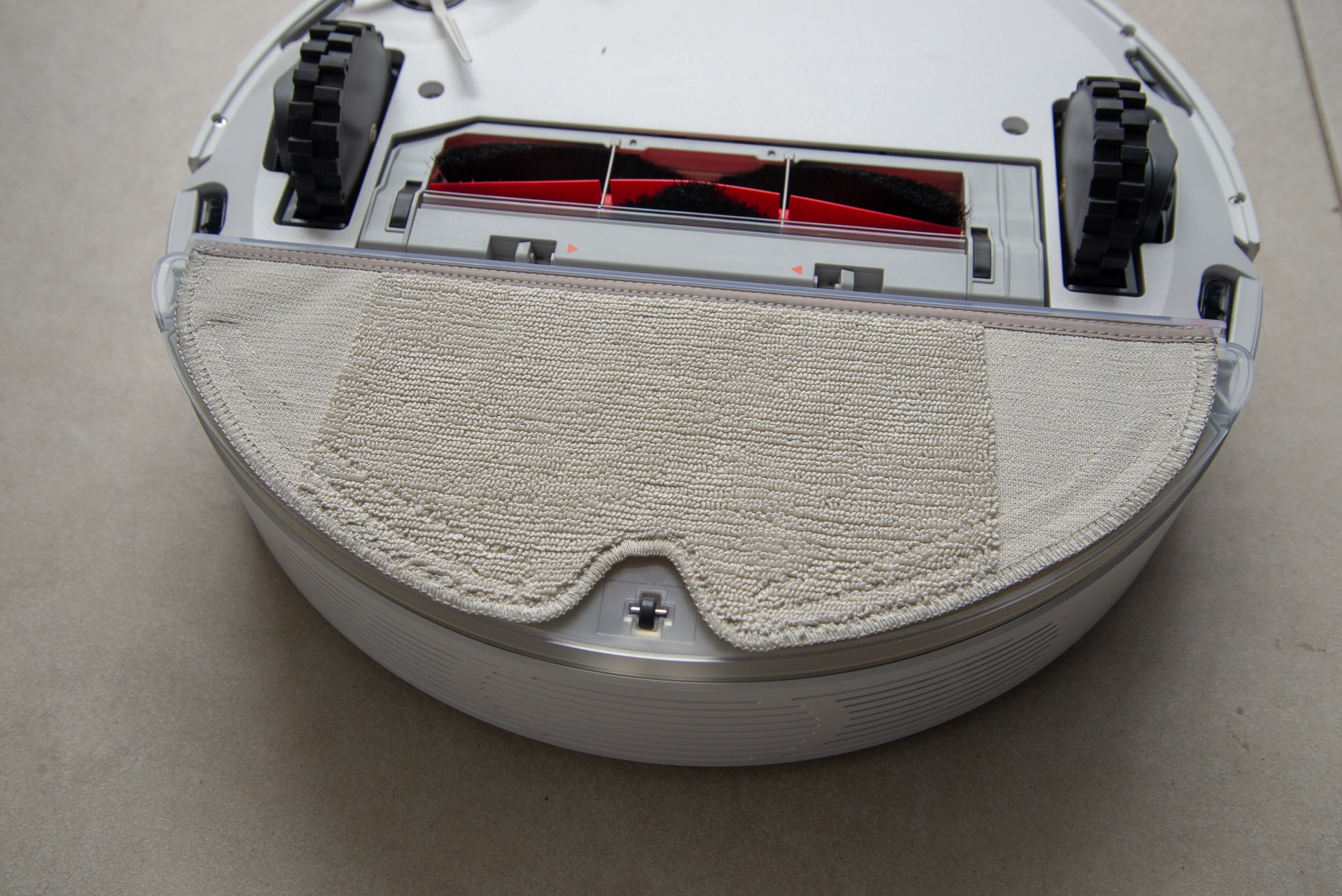 Moving around my kitchen floor, the Roborock S6 managed to dirty its microfibre cleaning cloth, showing that it was picking up some surface dirt. However, the floor remained noticeably dirty. For occasional use to pick up fresh marks, the S6’s mopping mode could be useful – but performance lags behind what it can do vacuuming. 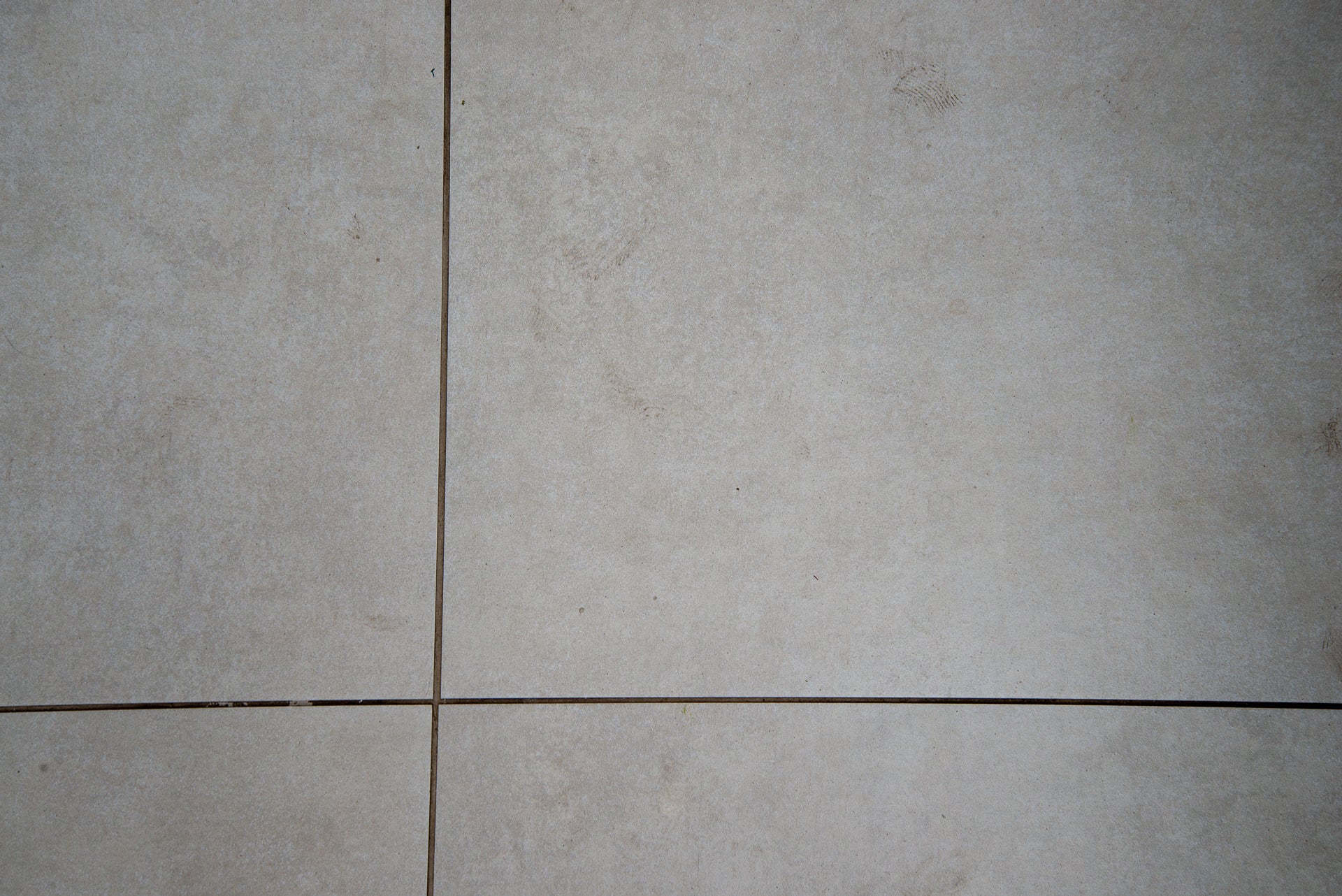 For wooden floors, Roborock provides a clip-on plastic base for the charging dock that will prevent water leaking into the floor. The company also recommends removing the water tank when it isn’t in use. Again, a product like the Deebot Ozmo 930 that has control over its water pump handle water better.

Why buy the Roborock S6?

There are other cleaners on our Best robot vacuum cleaner list that have slightly neater apps and better smart assistant integration, but those that can also vacuum exceptionally well tend to be more expensive.

As it stands, the Roborock S6 has the performance of a far more expensive robot vacuum cleaner, dealing with tough spills easily. With its smart mapping, it’s a more intelligent cleaner than I’ve seen from Roborock before, too.

The mopping mode is basic; it would be nice to see real improvements in this area. Without control over water dispensing, the mopping option helps clean up some surface stains but fails to give a deeper clean. At this price, I can forgive the slightly basic mopping function, as the quality of the main vacuuming is excellent. As is the robot’s price: you’ll struggle to get the same quality cleaning without spending a lot more.

Next
Vacuuming and mopping Review