The RHA TrueConnect ANC offer a pleasant mellow sound with a more three-dimensional sound field than most true wireless pairs. But short battery life and other more minor tech complaints make them seem a generation behind the latest top-end pairs.

The RHA TrueControl ANC are true wireless earphones made for those who want great audio plus all the techy features of pairs from Bose and Sony.

They come with active noise cancellation, support for voice assistants and an app that lets you tweak the audio.

There’s only one real reason to buy the RHA TrueControl ANC, however: the sound. These headphones create a large sound field that’s more engaging than those of cheaper pairs such as the Huawei FreeBuds Pro, Google Pixel Buds 2 and Samsung Galaxy Buds Live.

Make sure you’re prepared for their battery life before buying. They may be huge but only last 4.5 hours without active noise cancellation engaged, according to my testing.

The TrueControl ANC were announced in November 2020. They cost £249, pitting them against some of the most expensive pairs of true wireless earphones.

Sony’s WF-1000XM3 are likely to be an issue for this pair. Those rivals launched at £220, and are now available for significantly less than £200 online.

I have never used a pair of true wireless earphones that feel as much like a custom IEM as the RHA TrueControl ANC.

A custom IEM is a set of earphones made to fit your ear cavity. A technician fills you ear with goop to make a mould, and casts it in silicone or harder plastic to make the earpieces. 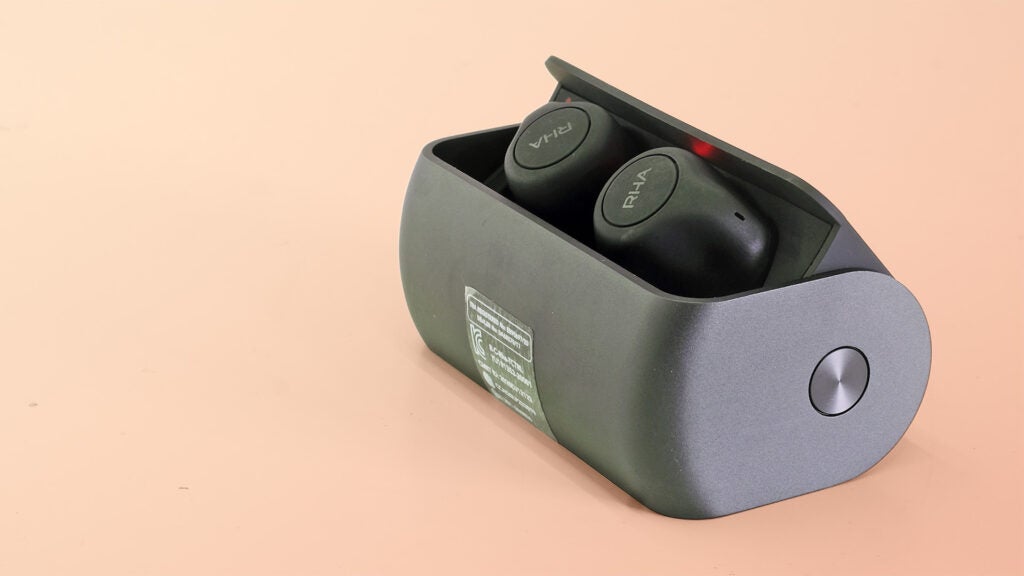 There’s none of that effort here – but the RHA TrueControl ANC still have the ear-filling feel of a custom IEM. Some won’t like it, but I find these earphones surprisingly comfortable.

I get no ear cartilage discomfort even after multiple hours of listening, as long as I don’t wiggle them around too much – and that’s the main risk with a pair of earphones that doesn’t just hang off a floppy tip stuck in your ear canal. And while these earphones plug up your ears, the actual tips don’t dig in too far. 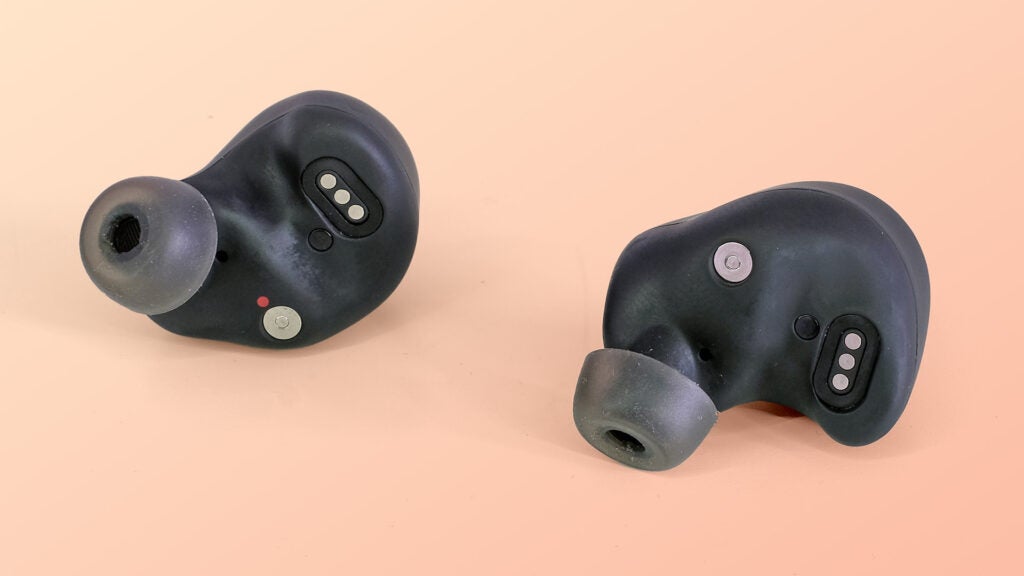 This custom-mould style helps improve passive isolation, the simple blocking of sound from entering your ear – and they don’t look too bad, either.

The RHA TrueControl ANC’s outer design is simple. There’s a ring on the back of each earpiece and a near-invisible RHA logo. These earphones are big, but not showy.

I expected the RHA TrueControl ANC would last a small age between charges, having opened the box without doing any research on their specs. But this isn’t the case.

RHA says the TrueControl ANC last five hours between charges. But after a run-down test, playing music with active noise cancellation switched off, I found the earphones lasted exactly four and a half hours. 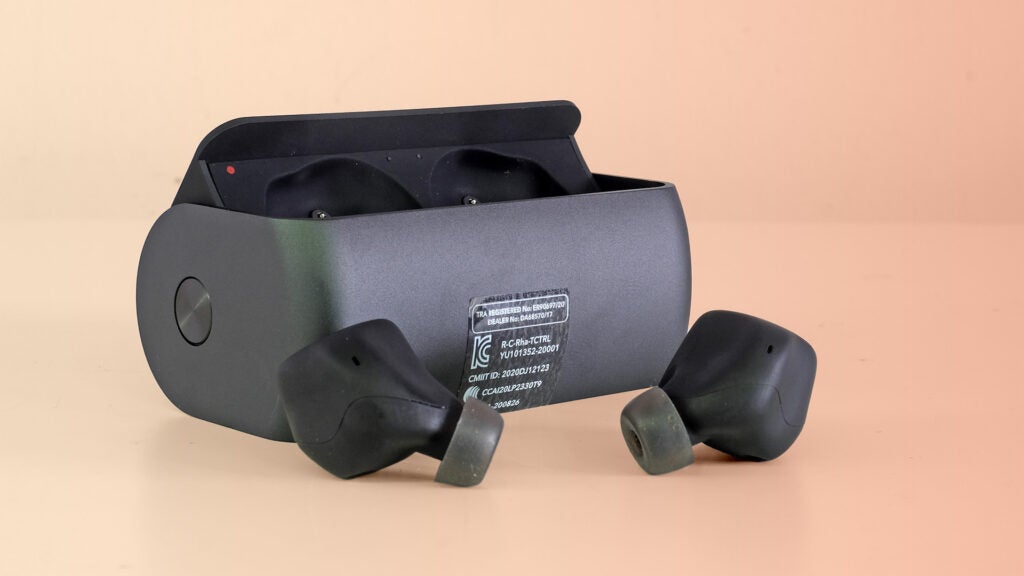 I asked RHA for details about its method of testing these earphones. “Our power rating settings are AAC, 50% volume, ANC on, random music. 4.5 hours might be due to you having higher volume or higher-quality compression like aptX,” was the reply.

So I gave the TrueControl ANC battery another go at 50% volume, with ANC switched off. But I was using an Android and didn’t force it to use AAC. This time the earphones lasted 4hrs 41mins, or 11 minutes longer than the first time.

You might get the five hours advertised with an iPhone, but switching off ANC doesn’t seem to improve matters. 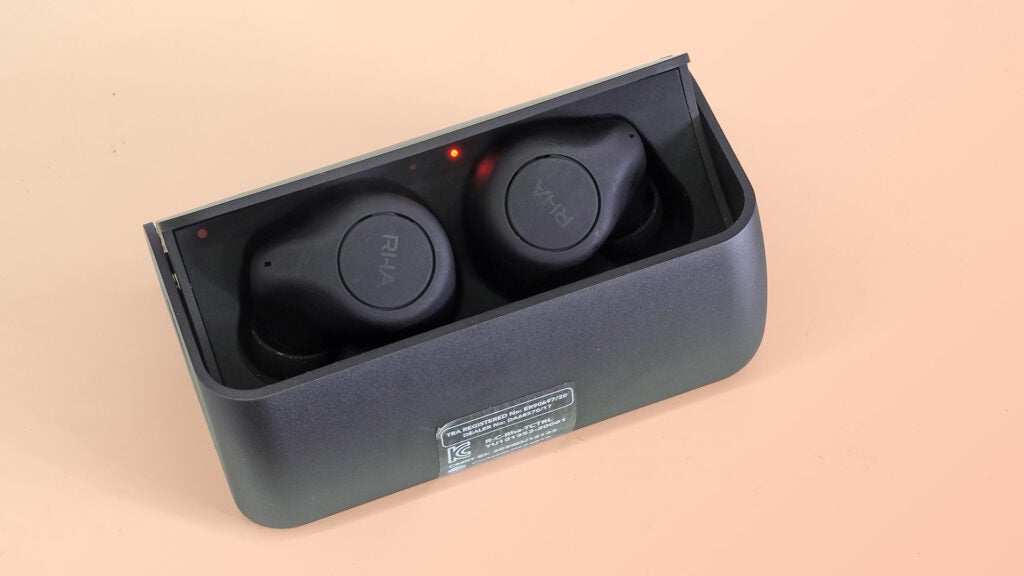 The RHA TrueControl feature active noise cancellation, which uses mics to analyse outside noise and zap it using sound waves that nullify it.

This isn’t quite as effective as the ANC on the Bose QuietComfort Earbuds, but it easily fits into the “does the job” category. Low-frequency road noise is largely removed, as are the rumbles of public transport.

You may not be transported to an eerie otherworld, but it makes listening to your music easier. And while there’s a light bed of hiss, this isn’t noticeable when you play music.

I’d call this a combi approach to noise blocking. The earplug-like earpieces actually do a lot of the work, leaving the ANC to deal with very low-frequency sound. 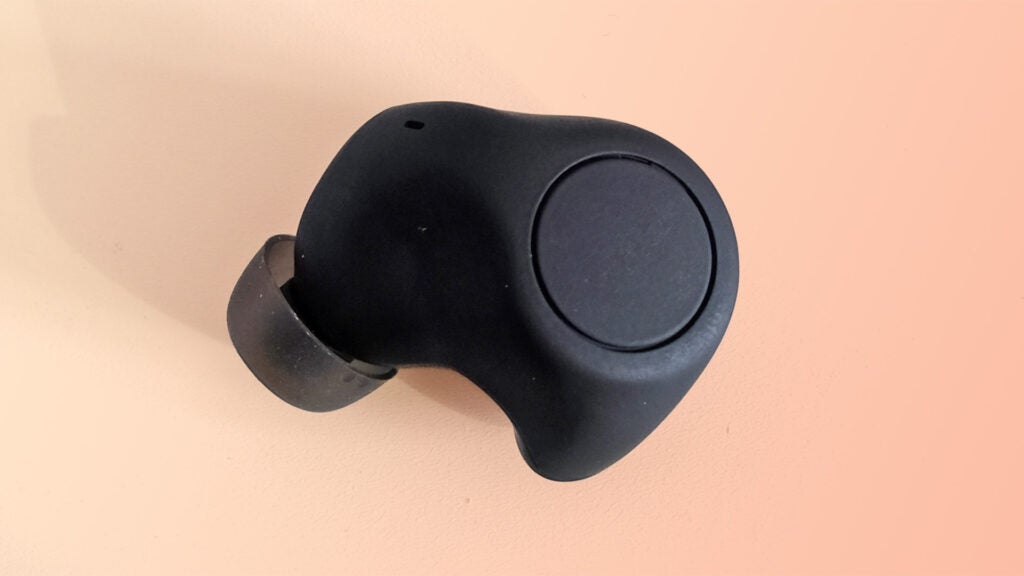 A press on one of the RHA TrueControl ANC earpieces toggles ANC and the “aware” mode, which plays some outside sounds through the drivers, so you can hear your surroundings more clearly.

These ambient modes used to be universally horrible, sounding like a tinny transistor radio representation of the sounds of the world outside. That I haven’t even noticed that the mode is on here, several times, is proof of the RHA TrueControl ANC aware mode’s quality.

It’s as if a hatch is opened on the side of the earphones, letting in outside sound. And it doesn’t interfere with your music much either. 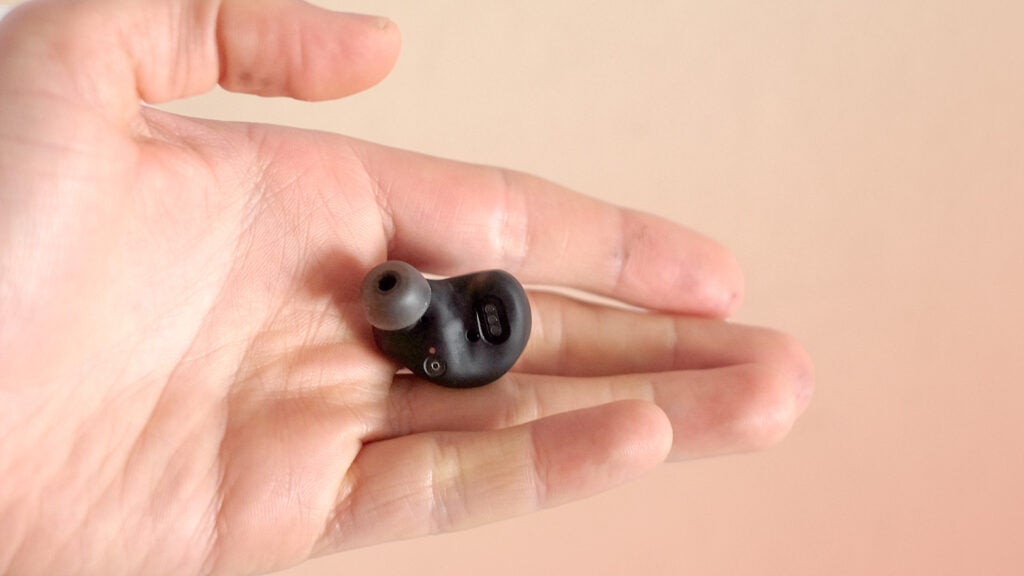 I’m not a huge fan of the capacitive button RHA uses, however. Put a hood up or go to alter the earphones position even slightly and your music is likely to pause. I accidentally fired off commands more often than I did deliberately.

I’d rather have a simple button and fewer controls, but the app does let you choose what swipe and “2x tap” gestures do on each earpiece. Or you can turn them off completely, if you’re happy using your phone for control. 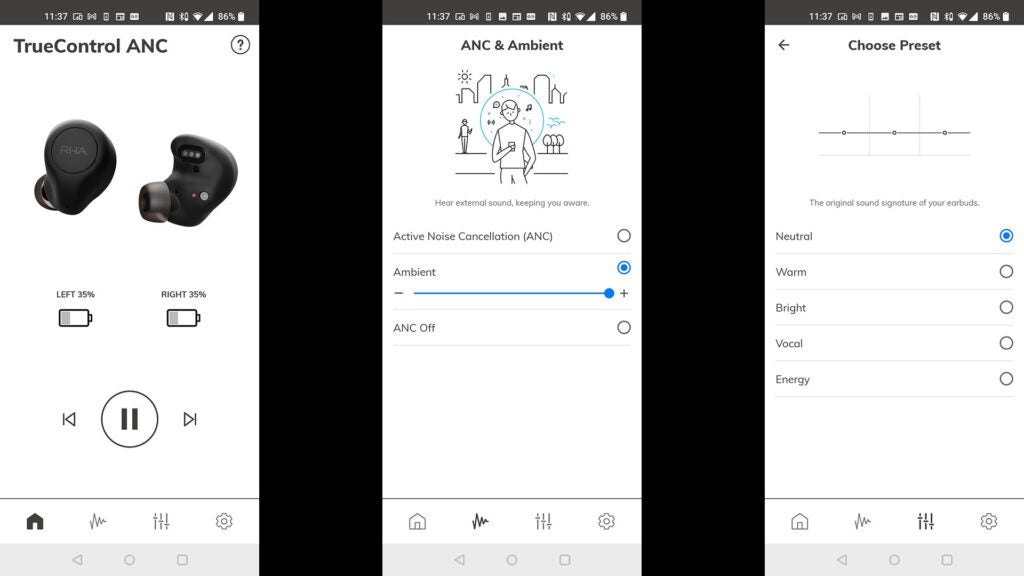 The RHA TrueControl ANC also have a sensor that pauses your music when you take them out of your ear. Thankfully, this can be turned off. However, it’s a useful battery-saving feature, letting them know when they can switch themselves off.

These earphones come with several techy extras, then, but they aren’t flawless in their presentation of some of the basics. On first switching them on, the reliability of their wireless connection was poor. This was fixed via a firmware update, so make sure you check for such updates.

They remain a bit of a pain to pair at times. I used them with four phones during testing, and they only worked without a hitch once.

The RHA TrueControl ANC have 6mm dynamic drivers, not the huge ones you might expect from the size of the earpieces. However, tiny drivers are so often the best, and there’s a lot to like here.

Imaging impresses most. These earphones have a sound field that displays a good amount of depth. Add that to reasonably wide audio and you have the sort of presentation that will see you get lost in music. Closed-back earphones such as the RHA TrueControl ANC aren’t going to fully get away from an “in your head” style of sound, but they get a good way there.

I often listen to vocal-free electronic music while working. It frequently displays sound elements dotted through the stereo sound field, and they often move about. The RHA TrueControl ANC do a great job of representing this sort of information, making these earphones more three-dimensional than a lot of true wireless pairs. 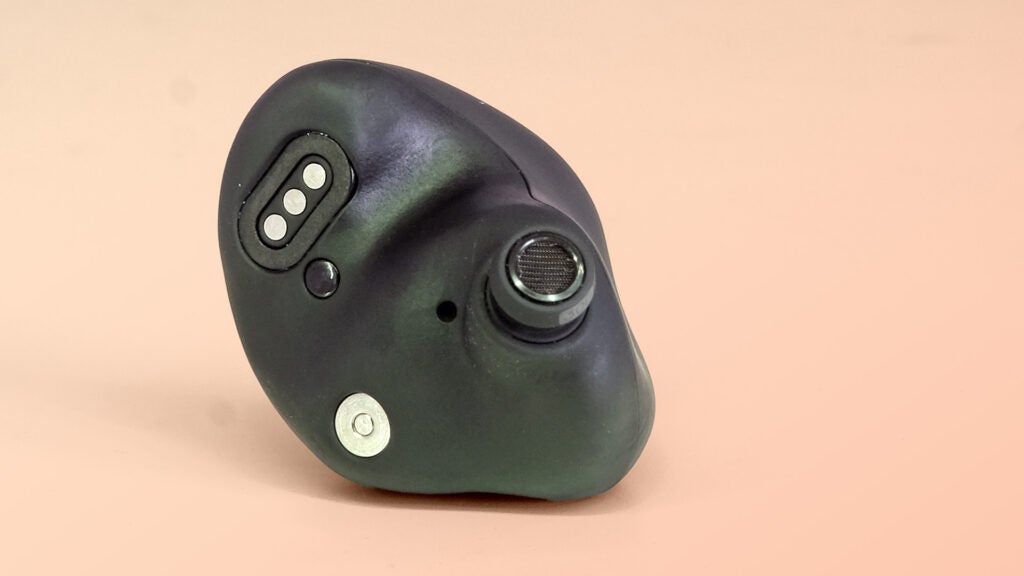 Like several higher-end RHA sets, the TrueControl ANC offer a thick velvety bass. It’s a rich sound, but not too boomy, or weighed down by too much mid-bass. That could clog up the nice stereo imaging just mentioned.

Switching ANC off seems to reduce the bass by a couple of decibels, so keep it switched on for the chunkiest sound. Sub-bass, the ultra-low frequency stuff is, perhaps surprisingly, not that strong. It’s there, but doesn’t display the heft of the Bose QuietComfort Earbuds.

This may well be deliberate, an attempt to make the low-end sound more grown-up at the expense of “pumping” bass.

The RHA TrueControl ANC treble isn’t as prominent or bright as the Sony WF-1000XM3’s. We get a mellower sound here, and that’s worth thinking about if you want the most dynamic, lively and rhythmic sound you can get for your money.

Still, these earphones are significantly better-sounding in most respects than the Google Pixel Buds 2, which seem a little simplistic by comparison.

The RHA TrueControl ANC don’t present a party in your ears, and neither do they aim for forensic levels of detail. Nevertheless, they’re among the best true wireless pairs for giving music a sense of space – and that’s something you can appreciate at all volumes, whether you’re listening closely or not.