What is the Rega Planar 2?

Rega is a company with a very sensible naming strategy: the higher the number, the further up the range. Sitting just above the entry-level Planar 1 in Rega’s turntable range, the Planar 2 is upgraded with a glass platter and a more sophisticated tonearm.

Rega has also teamed up with another British brand, Ruark Audio – from the same town of Southend-on-Sea, no less – to offer the Planar 2 in a bundle with a Rega Fono Mini A2D phono stage and a pair of Ruark Audio MR1 Mk2 speakers. At £789 that’s a fantastic vinyl-playback package, offering true hi-fi sound. 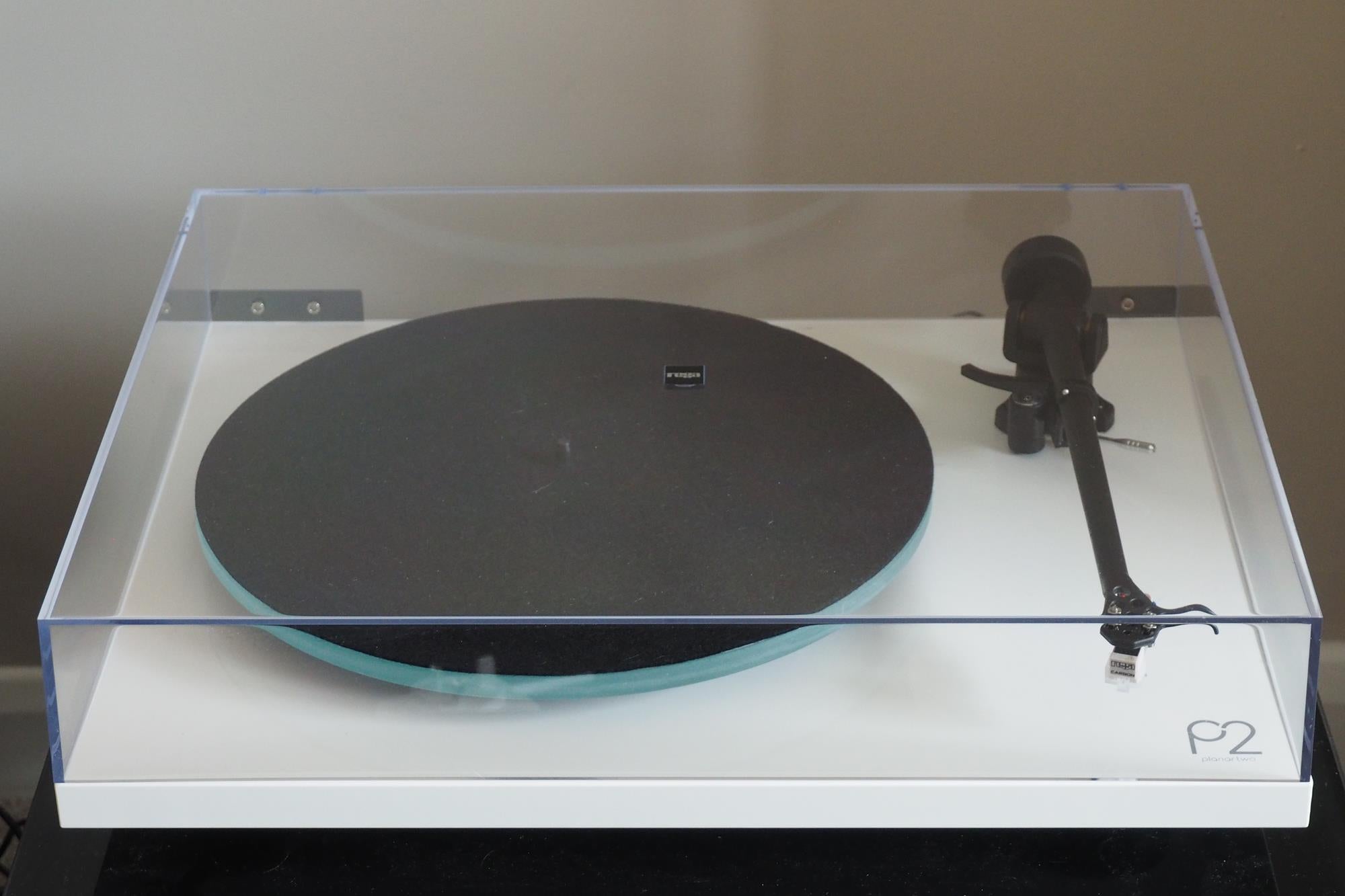 Squint a little and you’d struggle to spot the difference between the Planar 2 and Planar 1. Both feature an identical rectangular plinth – although the Planar 2’s is available in red as well as the black or white laminated finishes of the Planar 1. Both come with Rega’s standard removable dust cover.

Delve below the skin and even the fundamentals are the same, with a brass main bearing, a 24v low-noise motor driving a sub-platter, and an on/off switch on the left underside of the plinth.

Where the Planar 2 differs from its entry-level sibling is in its tonearm and platter. 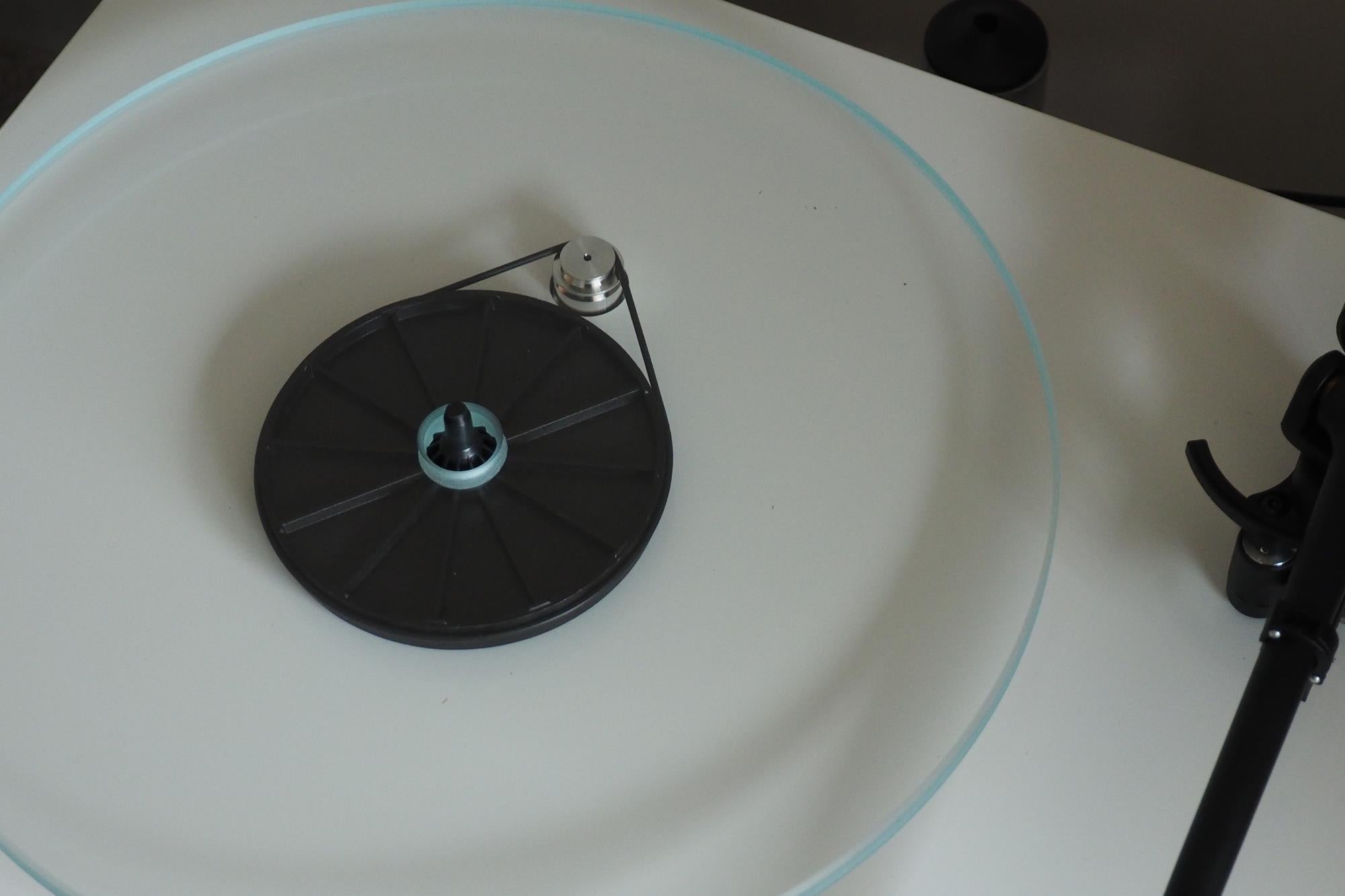 With the felt mat removed, you can see through the glass platter to the sub-platter, rubber belt and motor pulley below

The platter, rather than being phenolic plastic like the Planar 1’s, is 10mm-thick glass. This not only looks far classier, but also improves speed accuracy through its greater flywheel effect.

The other upgrade from the Planar 1 is the move up to the RB220 tonearm. This is a 9-inch aluminium arm with a stiffer bearing housing, and a one-piece arm tube and integrated headshell. It looks very similar to the RB330 on the Planar 3, except with automatic bias adjustment and a cheaper captive interconnect terminated in moulded plastic phono plugs. 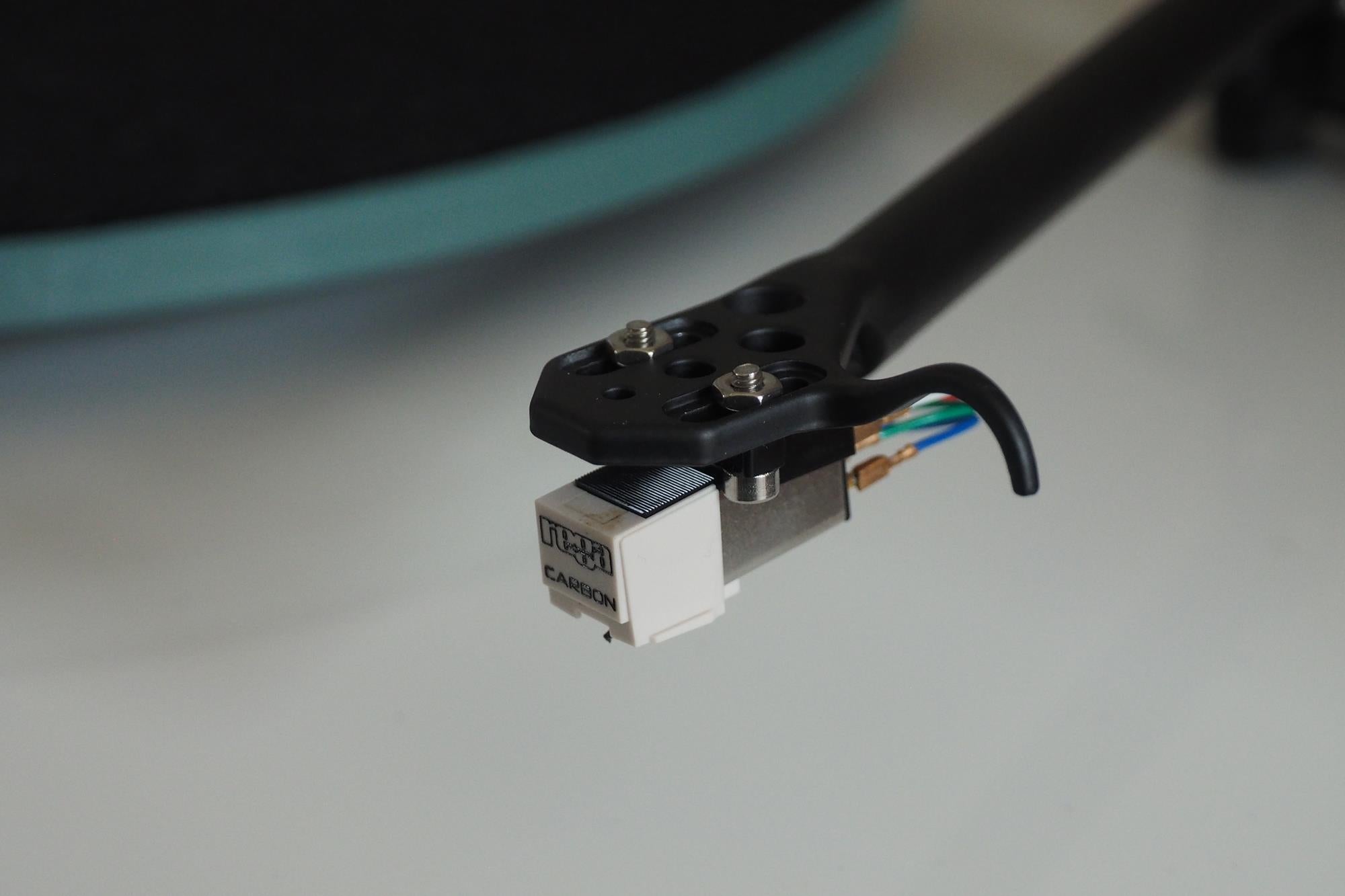 Pre-fitted to the RB220 is a Rega Carbon moving-magnet cartridge, which is based on the popular Audio-Technica AT91.

As with all of Rega’s turntables, this is no pure plug-and-play offering, as it doesn’t have a built-in phono pre-amp. That means you’ll need to buy a separate phono stage to plug in between the Planar 2 and the line input of your speaker system, unless you have an amp with a dedicated phono input. 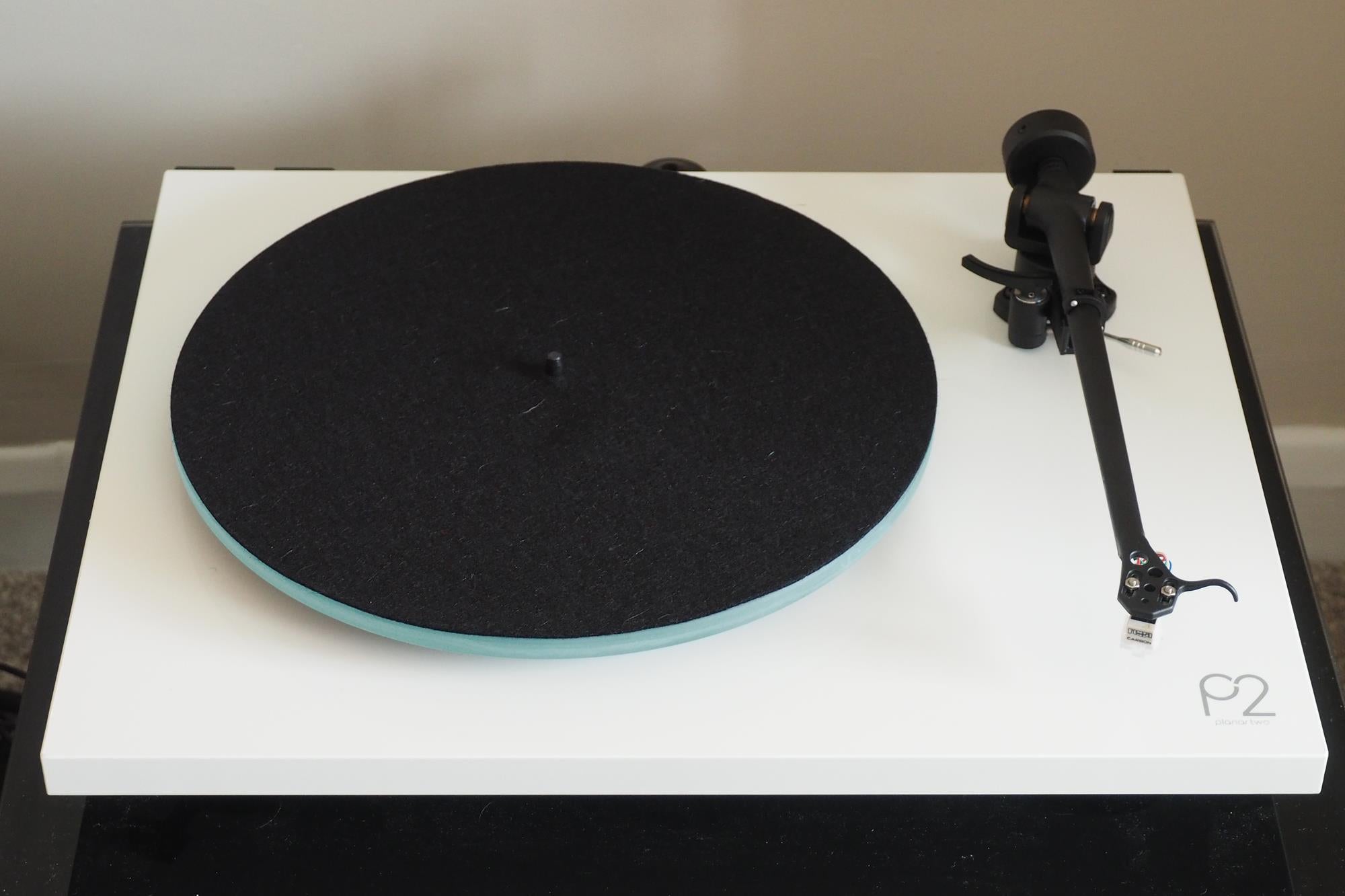 As well as the white finish shown here, the plinth is available in gloss black or red

As with most Rega models, there’s minimal set-up required with the Planar 2. Place the glass platter and its felt mat onto the sub-platter, wind the counterweight onto the arm stub and set the tracking weight (around 2g) for the cartridge.

A marker on the counterweight enables you to get the tracking force roughly correct, but at this level it’s worth buying a gauge – a mechanical one will cost you less than £10.

I tested the Rega Planar 2 plugged into Rega’s own Fono Mini A2D phono stage as part of the package with the Ruark Audio MR1 Mk2 speakers, as well as through the Leema Acoustics Elements Ultra phono stage in my main system. 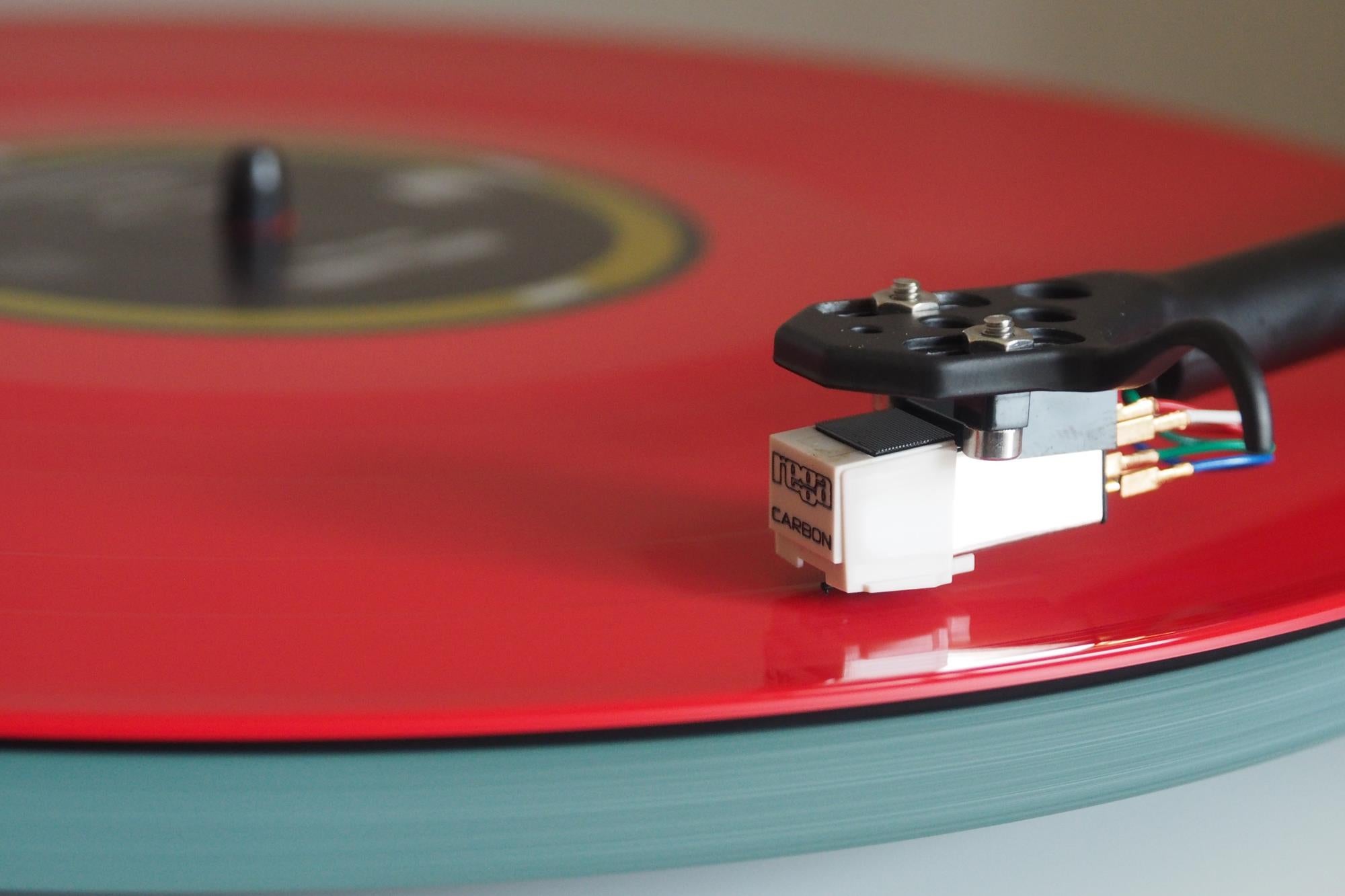 The sound is toe-tappingly involving, with the snappy timing that I’ve come to expect from Rega decks. Despite having the same cartridge as the Planar 1, the Planar 2’s improved tonearm and platter translate into a little extra resolution and tighter bass.

The upper mid-range also seems to have just that tiny but more shimmer. Sam Beam’s effortless vocals on Iron and Wine’s magical ‘Beast Epic’ album had a little more air around them, making the presentation a little more realistic.

With such agile, detailed sonics, the Planar 2 partners beautifully with the sensational little Ruarks, but it’s easily good enough to fit into a less modest hi-fi system. 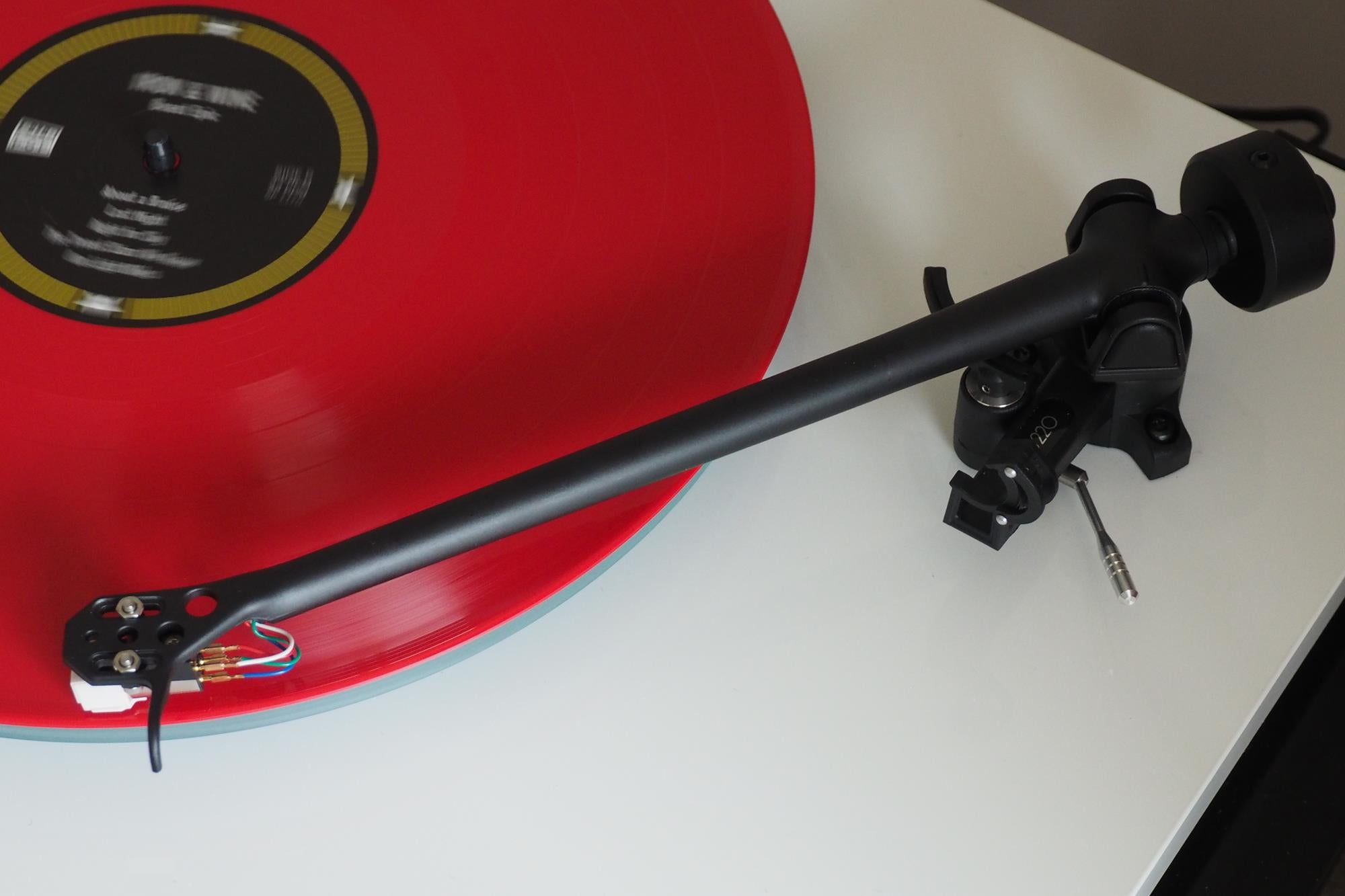 Should I buy the Rega Planar 2?

The Planar 2 faces some stiff competition not far above this price point, from models offering slightly more refined cartridges and built-in phono stages – such as the Crosley C20 and Pro-Ject Debut Carbon Phono USB. As with the cheaper Planar 1, it also can’t be upgraded to push-button speed changing, so you’re stuck having to remove the platter any time you swap between 33 and 45rpm.

However, for outright excitement and sonic panache, rivals can’t touch the Planar 2. It’s also a solid platform for taking a much better cartridge, such as the Rega Bias 2, should you wish to step up later.

A really exciting, enjoyable listen – as long as you don’t need to change record speeds too often.