What are the Ruark Audio MR1 Mk2?

The Ruark MR1 Mk2 are bijou British-designed Bluetooth speakers that simply ooze style and offer up true stereo hi-fi sound with minimal fuss. Among the many neat little upgrades from the original MR1, there’s now an optical input that means these sonic delights can be used to boost your TV’s audio.

There’s even the option to add a battery pack for portability, making this probably the best all-round wireless speaker system you can buy right now.

Ruark has also teamed up with fellow Southend-on-Sea resident, Rega, to offer the MR1 Mk2 in a record-playing package with either the Planar 1 or Planar 2 turntable for £659 or £789 respectively from Audio T. You won’t go far wrong with either combo.

Although the hand-crafted, rounded wooden cabinets are the same size and shape as those on the original MR1, gone are the black and white paint finishes. There’s now the option of Soft Grey lacquer – which is rather subtle yet sumptuous – and, of course, Ruark’s trademark Rich Walnut veneer.

The pair I tested were of the latter, and impeccably finished, but you can check out the Soft Grey option on Ruark’s site. They’re smaller than you might imagine from photos – each speaker’s a little smaller than Ruark’s R1 radio – but they feel solid, classy and perfectly in keeping with the company’s retro-modern design ethos. 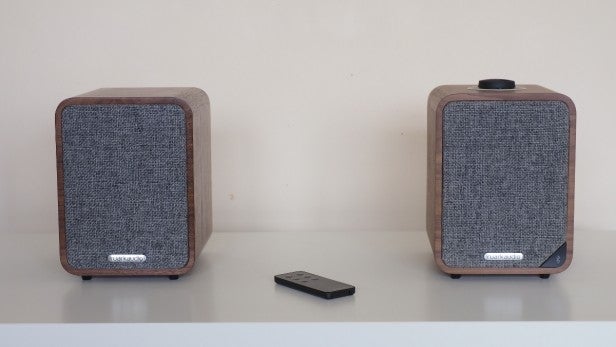 The removable grilles of the original MR1 have been ditched in favour of fixed grey fabric ones that look, frankly, stunning. Ruark claims to have tested a ton of different materials, but settled on this UK-made fabric for its combination of minimal sound colouration and maximum chic. My kind of combo. 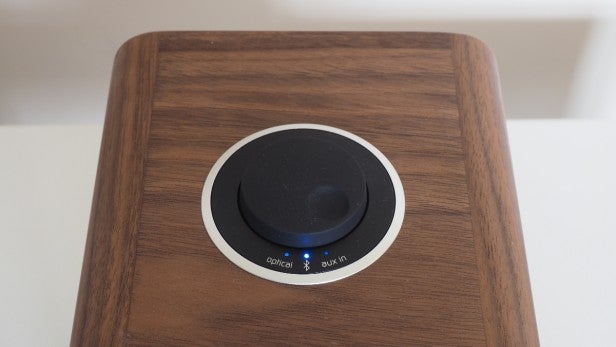 The controller on the top of the master speaker has received an upgrade too, with three LEDs to indicate status and audio source. Pressing down the knob turns the system on, and then each subsequent press cycles through the sources: a blue LED for Bluetooth (obviously); green for the analogue aux in; and orange for the optical input. A long hold turns the speakers off, while revolving the knob raises or lowers the volume.

Behind the stylish new grilles are the same 75mm woofer and 20mm textile dome tweeter with neodymium magnets as used in the first MR1, although changes have been made to the crossover. The class AB amplification has also been upgraded, but still pumps out around 20W.

Around the back of the right-hand speaker – the master, or control, unit – is the power socket, a 3.5mm line input, S/PDIF optical input, coaxial subwoofer output, and a 3.5mm output for the 2m braided cable that connects to the left-hand slave speaker.

Obviously, the MR1 Mk2 still have Bluetooth aptX for CD-quality music streaming, but that new optical input means the Mk2 can be hooked up digitally to most modern TVs to improve sound, rather than using a soundbar or soundbase. Perfect for anyone complaining about the mumbling in SS-GB. 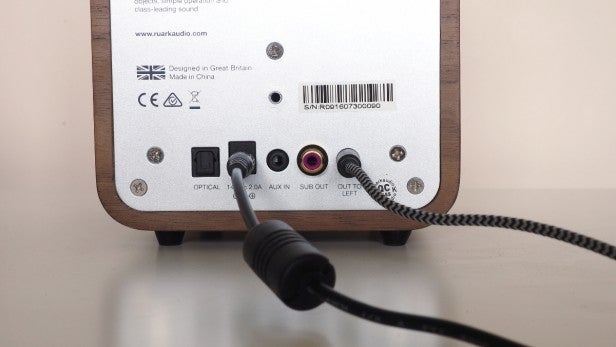 The MR1 Mk2 don’t have to be tied to a TV or gathering dust on a desk, though, as Ruark has provided a solution for setting them free. The optional BackPack II battery pack (£60) can be bolted onto the rear of the master speaker to make these beauties completely portable with up to 12 hours of battery life. No more tinny phone speakers soundtracking your summer barbecues – Lionel Richie’s “Back To Front” deserves proper volume, eh?

There’s no need to carry both speakers around, either – you can disconnect the slave unit and just use the BackPack-equipped master as a portable mono speaker. Very neat indeed.

The remote control is Ruark’s familiar little plastic unit, useful for when you’re not using a mobile device as a source (and hence controlling volume through your music app of choice). It’s cuter than the nasty little credit card remotes that seem to come with so many audio products these days, but it still has blister buttons and isn’t going to set the design world alight. 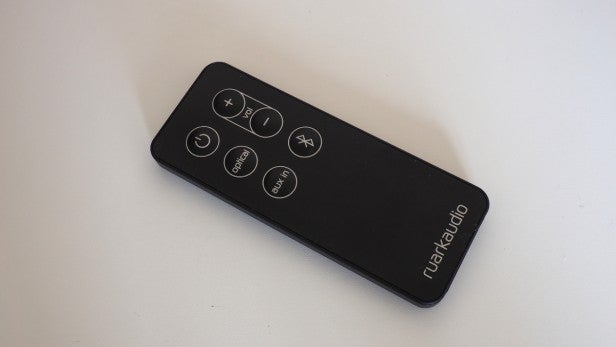 Right, so let’s get down to how they sound. Considering Ruark’s recent track record with the award-winning R7 Mk2, bijou R1 Mk3 and versatile R2 Mk3, these have a lot to live up to.

Pairing over Bluetooth was as simple as you’d hope – I simply selected Bluetooth as a source, waited for the blue LED to flash, and the Ruark MR1 Mk2 appeared in the device list of my Astell & Kern AK70, ready to connect.

Playing Shearwater’s pulsating protest record, “Jet Plane and Oxbow”, the many layers and textures that weave in and out are very well represented considering these speakers’ tiny cabinet dimensions.

These are undoubtedly hi-fi speakers, rather than your average Bluetooth portable speakers, so you get full-fat sound – there’s some bass, a sweet treble and actually some substance in between. They also sound larger than they are, and don’t lose composure when cranked up to a decent volume; there’s just a little thickening and tweeter spit.

Moving onto the intimate, sublimely beautiful “Carrie & Lowell” by Sufjan Stevens, the mournful regret trickling through every heartbreaking song was there in a way that most compact speakers – certainly most portable Bluetooth models – simply can’t match. You’re getting at least a taste here of what true hi-fi can do, of the emotion it can convey through a sweet treble and a decent level of mid-range separation.

Connecting them to my TV, the MR1 Mk2 excelled again. They’re superb at providing vocal clarity and decent volume, which is what most people buy a soundbar for. However, they can’t manage anywhere near the grunt of a meaty soundbase or a soundbar with a separate subwoofer. That’s why Ruark’s provided a sub-out, though.

Thankfully I had a £3000 Eclipse TD520SW to hand for a quick hook-up. OK, it’s not the mostly likely of pairings, but it was useful for showing the absolute full potential of the MR1 Mk2 as part of a 2.1 system. If you’ve got a large room to fill – my living area is 28×15 feet, so isn’t forgiving of tiny speakers – this is a worthwhile upgrade.

The sub provided that underpinning to make action movie soundtracks impactful, but also took the Ruarks to the level of a truly decent full-size hi-fi. Listening to “That Sea, The Gambler” from Gregory Alan Isakov with the Colorado Symphony – an emotional experience at the best of times – the extra power from the Eclipse sub never embarrassed the sweetly rounded treble or detailed mids of the MR1 Mk2. I’ve heard hi-fi separates systems that sound far worse. 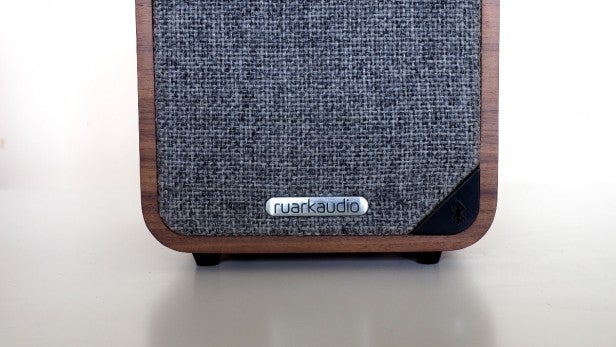 Should I buy the Ruark Audio MR1 Mk2?

Ruark has made some really sensible decisions with this upgrade. It’s taken a neat, sexy, great-sounding Bluetooth speaker system and made it more versatile, while also adding extra lashings of style. The options to hook it up to a TV, add a subwoofer, or bolt on a battery pack for portability all make the MR1 Mk2 very nearly perfect.

The lack of integrated Wi-Fi and multiroom support is the only real downside to the MR1 Mk2 – but on the other hand, there’s nothing to stop you popping a Chromecast Audio into the optical input.

Stepping up to the Ruark R2 Mk3 gets you that functionality built in, but at the expense of portability, while something like a stereo pair of Sonos Play:1 works out more expensive and lacks the option to be used for TV audio.

In other words, there’s basically nothing not to love about the Ruark MR1 Mk2.

The upgrades that Ruark has made to an already impressive Bluetooth speaker system have brought it damn near to perfection. Very classy indeed.