The Razer Turret (Xbox One edition) is a definite step forward from the original. The custom Razer-made switches aren’t for everyone, but they’re more than good enough for competitive gaming. This, coupled with an upgraded mouse and large mat, make it a great option for sofa-seated players. But as a standalone product there are better wireless gaming keyboards available for the money.

The original Razer Turret was an interesting, but compromised, beast that aimed to be the ultimate wireless keyboard and mouse combo for lounge PC gamers.

It offered an innovative stand design and charging mechanism. This, coupled with a fold-out mouse pad, made the original Razer Turret come close to achieving its goal. But the use of chiclet keys ultimately made it feel inappropriate for competitive gaming.

This is why we’re happy to see Razer take a second stab at making the ultimate lounge gaming keyboard with its shiny new Razer Turret (Xbox One edition), which – thank the pew pew gods – features proper mechanical switches.

The use of Razer’s own mechanical switches isn’t the only design change the company’s made to the new Turret. These are good and bad in equal measure.

The keyboard has been completely redesigned. As well as the new switches, Razer’s ditched the proprietary charge stand. This is great, because you can now charge the keyboard using any USB cable – as an added perk, the company also includes a port and cable to let you charge the included wireless mouse through the keyboard.

The downside here is that it makes an already large product take up a lot more space. One of the best things about the original Turret’s stand was how much space it saved by letting you vertically dock the keyboard and mouse. Razer’s also refrained from loading the keyboard with media shortcut and macro keys. I can forgive the absence of macros, but the lack of media controls makes it feel a step behind the Corsair K63. 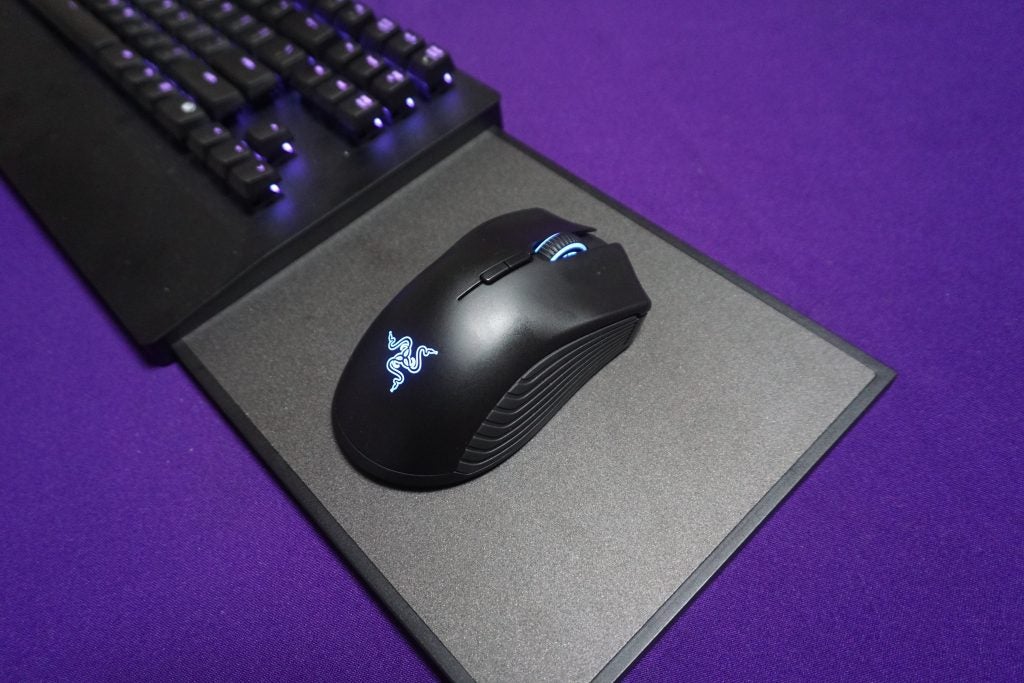 The 2.4GHz wireless dongle included makes it a breeze to set up on both the Xbox and PC – insert it into a USB port and you’re good to go. The Chroma backlighting continues to look great on both the keyboard and mouse, and is super-easy to customise via Razer’s Synapse app. The only issue is the Xbox main UI isn’t set up for mouse input, so you’ll find yourself navigating the main menu with arrow keys.

That aside, I’m a huge fan of the new pop-out mouse pad. Unlike the previous Turret, the new version has the lap mouse mat slide out of the keyboard’s right side. The mechanism feels significantly sturdier and makes it possible to store the mat if you happen to be using the Turret at a desk.

When it comes to performance, the Razer Turret Xbox edition is generally good, but comes with a few compromises resulting from its lap/lounge gaming focus.

The biggest elephant in the room is its size. The use of mechanical switches is great, but it makes the keyboard significantly bigger than the original Turret. With the mouse tray out, it’s nearly two feet wide and weighs 1860g. Even though it’s a 10-keyless keyboard this makes the new Turret feel a little clunky.

But for me, the cleverly designed mouse tray makes up for this. As well as being larger than the original Turret’s, the new tray is magnetised. This sounds like a small improvement, but it helps prevent the mouse falling to the floor or flying across the room when you stand up or adjust your position. 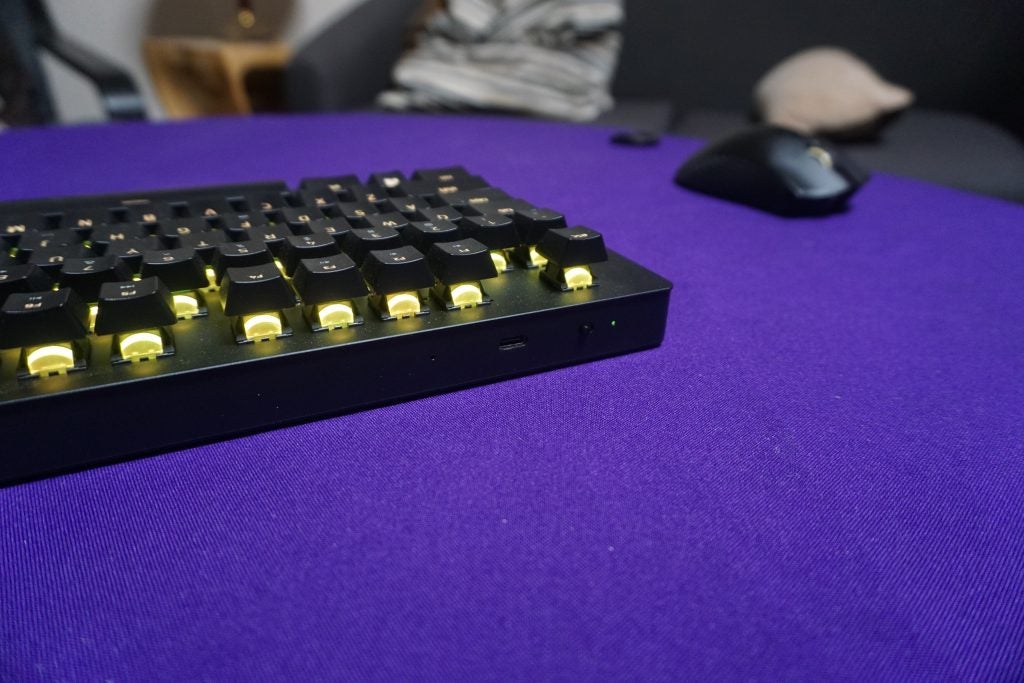 Personally I prefer the red switches on Corsair’s K63 to the new Turret’s proprietary Razer Mechanical Green switches, which have a more noticeable tactical bump and feel a little like Cherry MX Blues. But the updated tray and new mechanical keys mean you can play competitive first-person shooters in your comfy chair, away from a desk – something I couldn’t say about the original or the K63, which doesn’t have an attachable mouse pad.

The mouse is also generally good. The 16,000 DPI mouse is a customised version of the Razer Mamba, which is no bad thing. The mouse has a compact, ergonomic design with two side buttons and a nicely tactile control wheel and DPI controls on top.

The only downside is that, because it’s on your lap, the play angle is lower than it would be on a desk setup. This means prolonged sessions can feel a little painful, despite the keyboard’s nicely sized wrist rest. This is a shame, as battery life is pretty good and I’ve easily had at least 10 hours gaming out of the Razer Turret, with backlighting on, before having to reach for a charge cable. 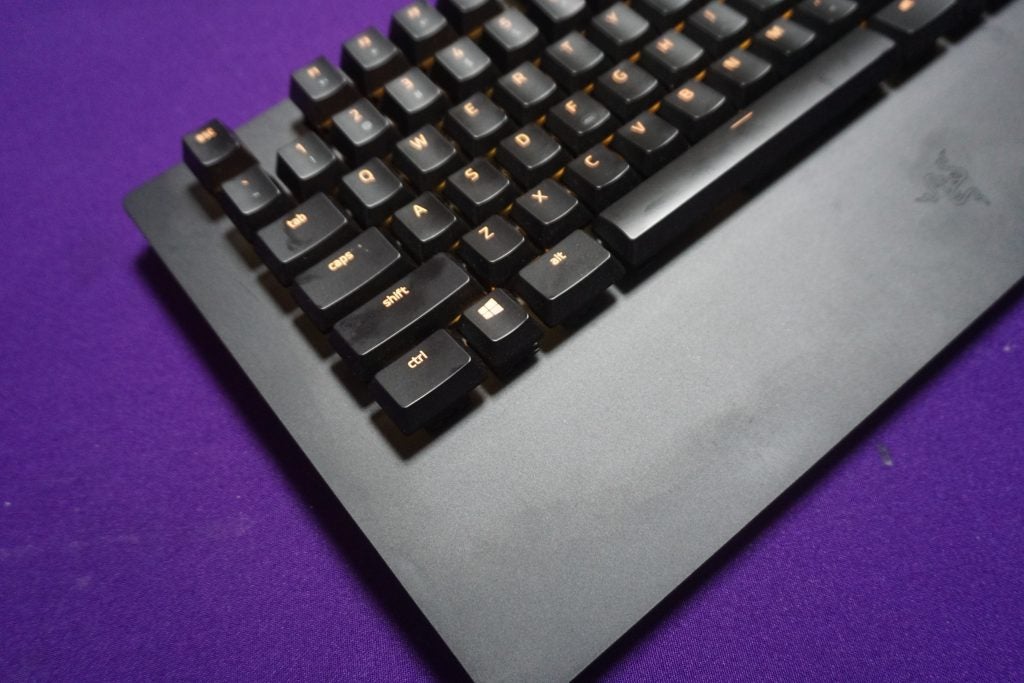 Should I buy a Razer Turret (Xbox One edition)?

If you’re a console or lounge PC gamer looking for a well-built, reliable wireless gaming keyboard to use on your lap, then the Razer Turret is pretty much your only option at the moment.

As gaming keyboards go, I’m not completely sold on Razer’s custom switches. But the mouse, nifty pop-out pad design and solid battery life make it a great option for its intended users.

Issues with its hefty weight and sizeable design, coupled with strong competition from Corsair, whose K63 is a better standalone wireless gaming keyboard, stop it from scoring top marks, however.

The Razer Turret (Xbox One edition) is a definite step forward from the original, with an upgraded mouse and large mat making it a great option for sofa-seated players. But as a standalone product there are better value alternatives available.