What is the Razer Core?

The Razer Core is a clever bit of kit. Plug a graphics card into its PCI-Express slot, connect it to the Blade, and the GPU’s power is harnessed by the laptop – turning the ultrabook into a gaming laptop. Sound familiar? Alienware made a similar product in 2015, but it used a proprietary connector and is no longer on sale.

It costs £500, though, and that’s without the graphics card. Can the Core make a convincing case for eliminating the traditional gaming notebook?

The Core gets off to a serious start. It’s a 5kg lump of metal with slats covering its front panel and more on the top, and its smooth sides hold a discreet, embossed Razer logo. There’s a glowing light beneath the front panel, and it’s RGB – so it can be modified in Razer’s Windows software. 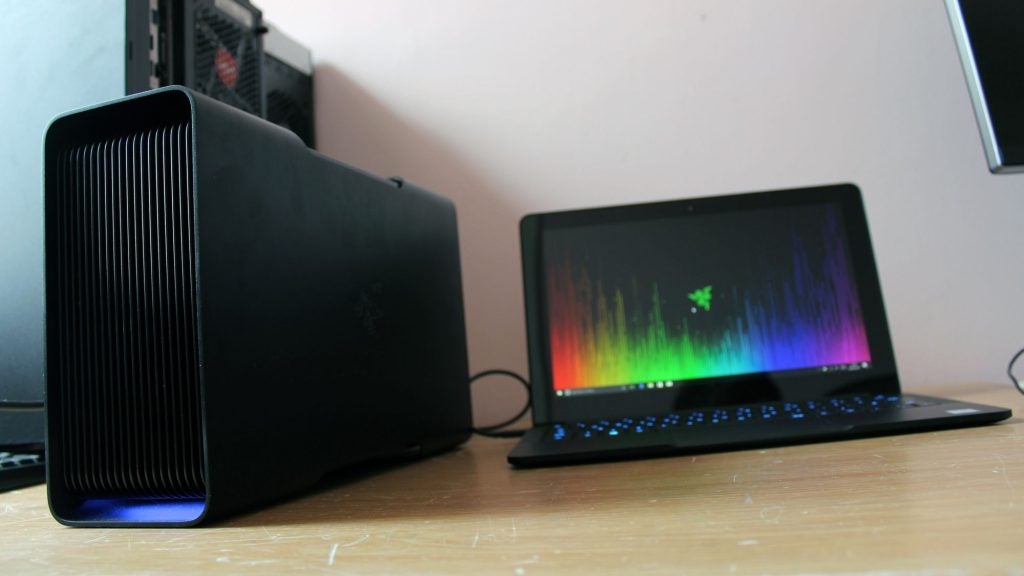 The Core is 352mm long, with 300mm of length for graphics cards including those with double-width heatsinks – so virtually every card will fit. It’s extremely sturdy, so it’ll handle being lugged to LAN events and around the house, and its rear serves up four USB 3 ports and a Gigabit Ethernet socket – a    boon when it’s connected to the Blade Stealth, which has few ports of its own.

It’s easy to use, too. A handle at the rear is used to remove the innards, and the single PCI-Express x16 slot sits alongside a small PSU that provides two eight-pin power connectors and 375W of power.

Razer’s device accepts a huge swathe of cards: anything from the Nvidia GeForce GTX 750 and AMD Radeon R9 285 and newer will work inside this box.

Slot a card in, push the internals back inside, and lock the handle down – then connect the Core to the Blade Stealth using the supplied Thunderbolt 3 cable. Once the laptop has booted, it recognises the GPU as if it was connected conventionally, so you’ll only have to install its driver and restart the machine. 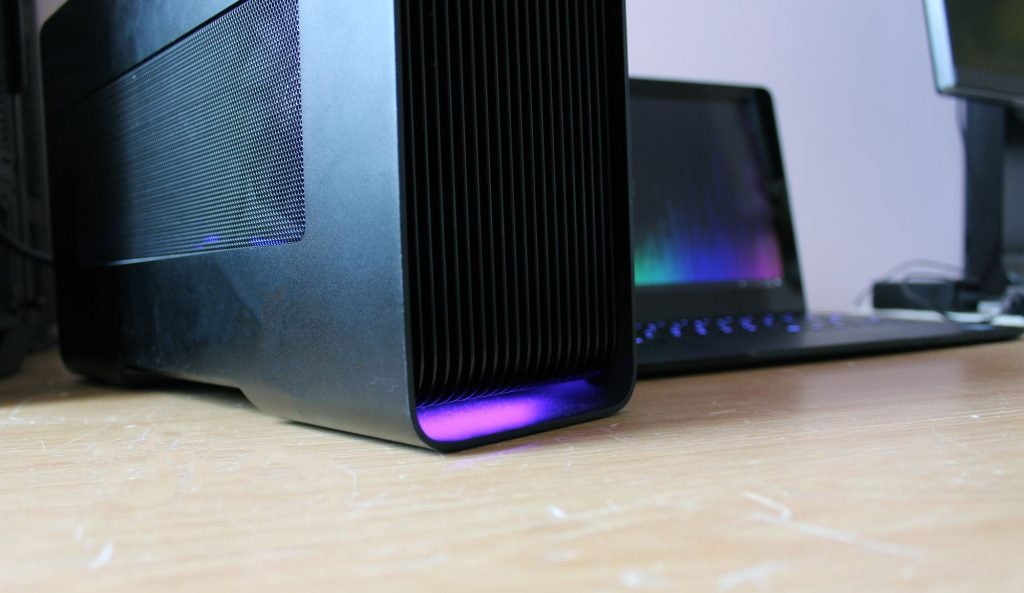 Once that’s done, you’re ready to go – the laptop will deploy its extra graphics power on its own screen or when outputting to an external panel.

The Core is a well-designed product that’s simple to use, but it does come with a couple of caveats about its performance levels.

For starters, there’s Thunderbolt 3 itself. The connection used here is the Double Port version, which is the most powerful Thunderbolt protocol, but that still only offers four PCI-Express 3.0 lanes – rather than the sixteen that the slot supports. That’s an issue if you want to use a powerful graphics card that requires most of the bandwidth that a full-speed PCI-Express socket can offer.

And there’s the Blade Stealth itself. That slim machine has a low-power Core i7-7500U processor that runs at 2.7GHz and has only two cores. It also supports low-power DDR3 memory rather than faster DDR4 RAM. Those components will bottleneck any modern, powerful graphics card.

The issue will be less pronounced on better laptops. Razer’s normal Blade notebooks have full-power Core i7 mobile processors, so the performance gulf will be narrowed. But, then, they come equipped with desktop-spec GTX 1060s, so you might think twice about needing an external graphics dock in the first place.

These issues won’t be limited to Razer laptops. The Core uses a Thunderbolt 3 connection rather than any proprietary hardware, so it should work with any laptop that has the same kind of port – whether it’s running Windows or, from High Sierra onwards, MacOS. I say should, because these sorts of products throw up all sorts of uncertainties due to varying hardware and software support from different vendors. Buy with caution. 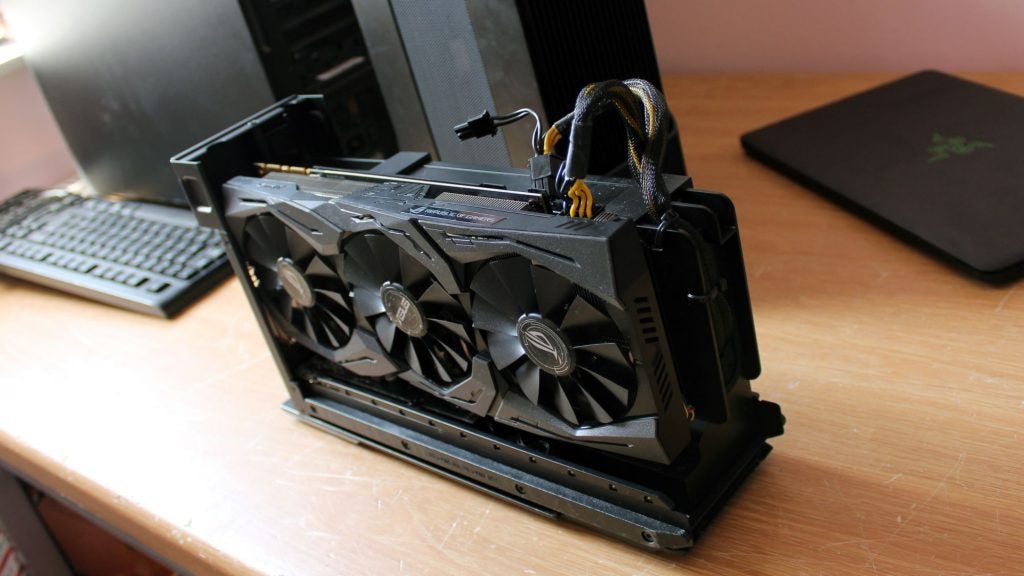 I tested the Core with the Razer Blade Stealth and using two graphics cards: a range-topping Nvidia GeForce GTX 1080 Ti, and a mid-range AMD Radeon RX 480. I also tested those cards inside a powerful desktop PC, with a Core i7-7700HQ processor, loads of DDR4 memory and a fast SSD.

I’ve tested using seven different games along with theoretical CPU and GPU benchmarks to illustrate the kind of boosts possible using the Core – and to find out how it lags behind proper desktops.

The Core and the GTX 1080 Ti helped the Blade Stealth deliver a huge boost to gaming. The desktop graphics card and Ultrabook ran with averages between 57fps and 110fps at 1080p, and at 1440p – the Blade Stealth’s native resolution – the Core helped the notebook run at 48fps or better.

The Core, Nvidia’s card and the Blade Stealth ran at 4K, too, when outputted to an external monitor. Its weakest result here was a 25fps minimum in Middle Earth: Shadow of Mordor, but it managed minimums of 30fps or better in five of my test games – and its 4K averages ranged from 36fps to 67fps.

The Core and the GTX 1080 Ti helped the tiny Blade Stealth deliver 4K framerates, then, but the gulf between this hardware and a proper gaming PC is wide.

The Core and the laptop, for instance, scored 10,625 in the 3D Mark Fire Strike test – but the Core i7 desktop with the same GPU scored 21,056. The gap closed in tougher tests, but the Core’s Fire Strike Ultra pace of 5441 was still more than 1000 points behind the proper desktop.

There was less of a gap between the Core and the desktop PC when we tested using the RX 480 , but that’s no surprise – the lesser abilities of this card means it’s not as fast, either.

Those figures are all playable, but that’s as much as the RX 480 can handle. Its 4K averages range from 17fps to 31fps, and its minimums dip as low as 8fps.

The gaps were closer in theoretical tests, too. The Core and the RX 480 scored 8,307 in Fire Strike, while that card inside our test desktop scored 11,424.

The conclusion is clear, then: The Razer Core should not be used with a high-end graphics card unless you happen to have one lying around. The limits of the bandwidth available to it makes anything beyond a mid-range GPU a bit of a waste. But if you do hook up a mid-range card to the Core, you graphics performance will improve dramatically over your integrated Intel HD graphics, which is the aim after all.

Below is a selection of results to illustrate the performance of the Core. I’ve also included comparisons with the full desktop PC. 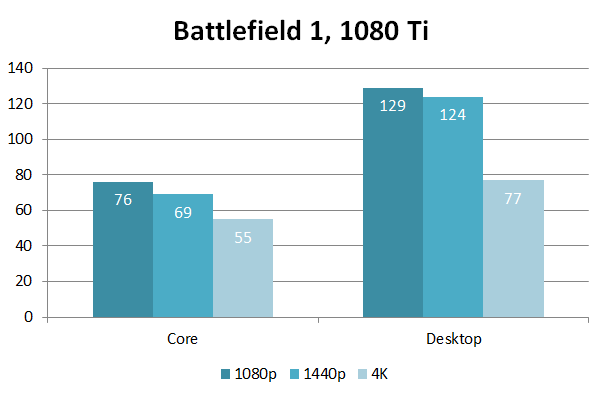 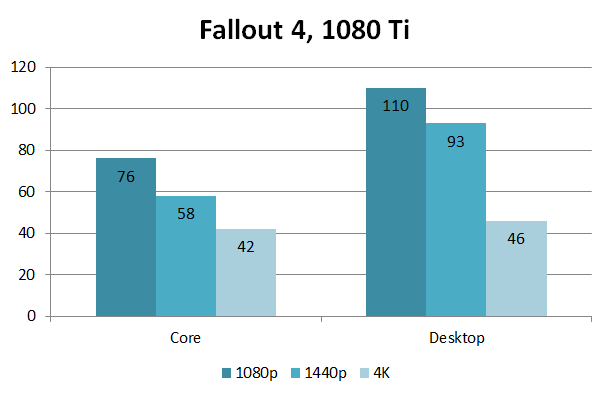 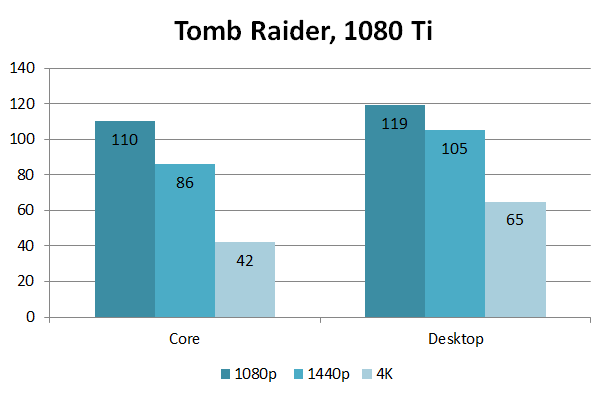 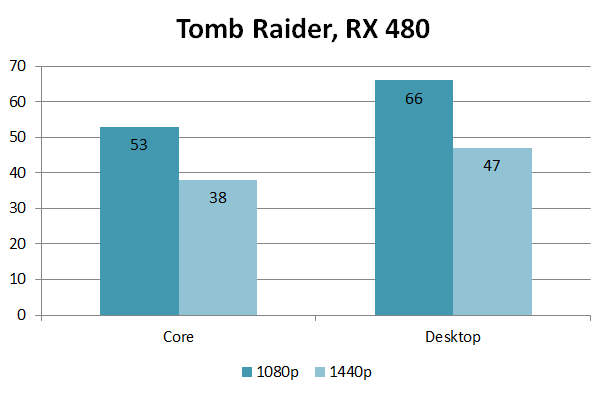 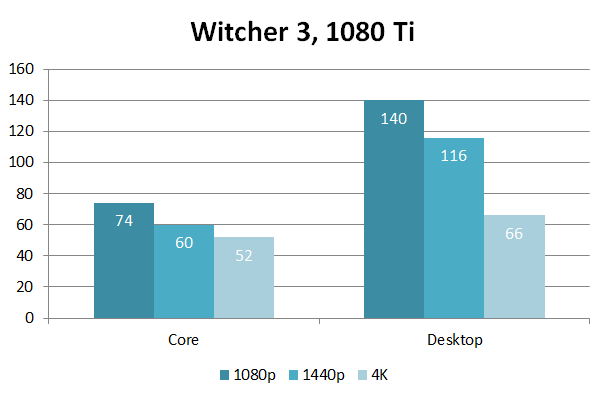 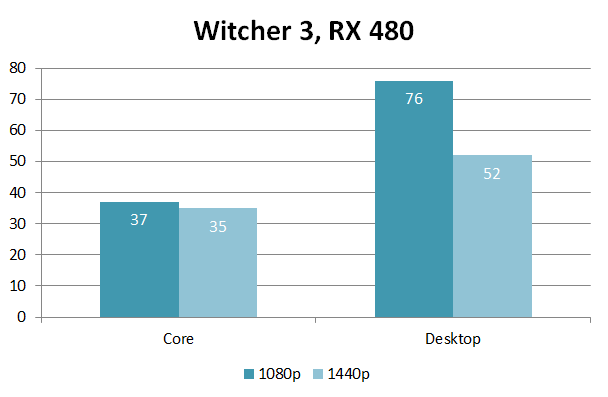 Should I Buy the Razer Core?

Razer’s graphics dock will always deliver a big improvement when compared to notebooks with integrated graphics and weak discrete cores, but CPU and Thunderbolt bottlenecking means that cards inside will never achieve their full level of performance. To achieve desktop performance in a notebook, you’ll still need a hotter, heavier and more expensive gaming laptop.

It’s not just about pure performance, though – the Core is about versatility. It’s easy to add a graphics card to any laptop with a Thunderbolt connection, and the Core delivers a huge gaming while allowing smaller notebooks to retain their portability.

That’s perfect if you have a small notebook for day-to-day and want to beef up its gaming abilities when you close your last spreadsheet of the day, but the Core does have its caveats. The bottlenecking, for starters, and the cost – the Core is £500, and that’s before the GPU has been added.

It’s better-value if you already have a graphics card to use, and it does look like decent value when compared to a conventional gaming laptop – the Core and the Blade Stealth together cost £1850, which could easily be spent on a cumbersome gaming notebook that’s harder to live with.

The Core is a niche product but it does a good job of bringing rapid gaming pace to laptops that would previously have struggled. That makes it a fine alternative to heavier gaming products, especially if you’re not going to be gaming on the road.

Other companies including HP, Dell, Zotac and Asus have all announced Thunderbolt graphics docks, but as yet none have been made available to us for review. But they’re worth keeping an eye on if you can wait, as they’re likely to be a bit cheaper.

Razer’s Core is a hefty lump that delivers a solid gaming boost to laptops that would have never been able to play modern games, but bottlenecking means any graphics card will never be able to perform to its full potential. The price is a barrier to entry, too, but this niche product still delivers a way to retain a notebook’s portability while adding optional gaming power for certain scenarios.