The Razer Blade Stealth 13 is a superb Ultrabook with gaming flair, fulfilling the "work hard, play hard" philosophy better than any other system. But given its steep price, it should only be considered if you’re happy sacrificing gaming performance for that ultraportable design.

The Razer Blade Stealth 13 is an Ultrabook that prioritises portability above all else, rocking a slender and lightweight design that’s easy to slip into a bag.

Despite Razer’s gaming pedigree, the Stealth isn’t strictly a gaming laptop in the way of the larger Razer Blade 15 and Razer Blade Pro. Instead, this is an Ultrabook looking to challenge the likes of the Dell XPS 13 and Surface Laptop 3.

This isn’t to say gaming is completely off the table, with Intel’s Ice Lake chip (and optional Nvidia GTX 1650 Max-Q Design GPU) making it possible to play titles such as Apex Legends and Fortnite.

Factor in the RGB keyboard and Razer Synapse software, and the Stealth 13 may just be the perfect compromise for gamers looking for an ultraportable machine.

The new model of the Razer Blade Stealth 13 looks identical to the previous iteration, barring one key difference: the new Mercury White finish.

Razer seems to be trying to make it easier for customers to distinguish between its lifestyle and gaming laptops. This is supported by the fact that the more powerful model, housing Nvidia’s GTX 1650 Max-Q GPU, retains the traditional black paint job. 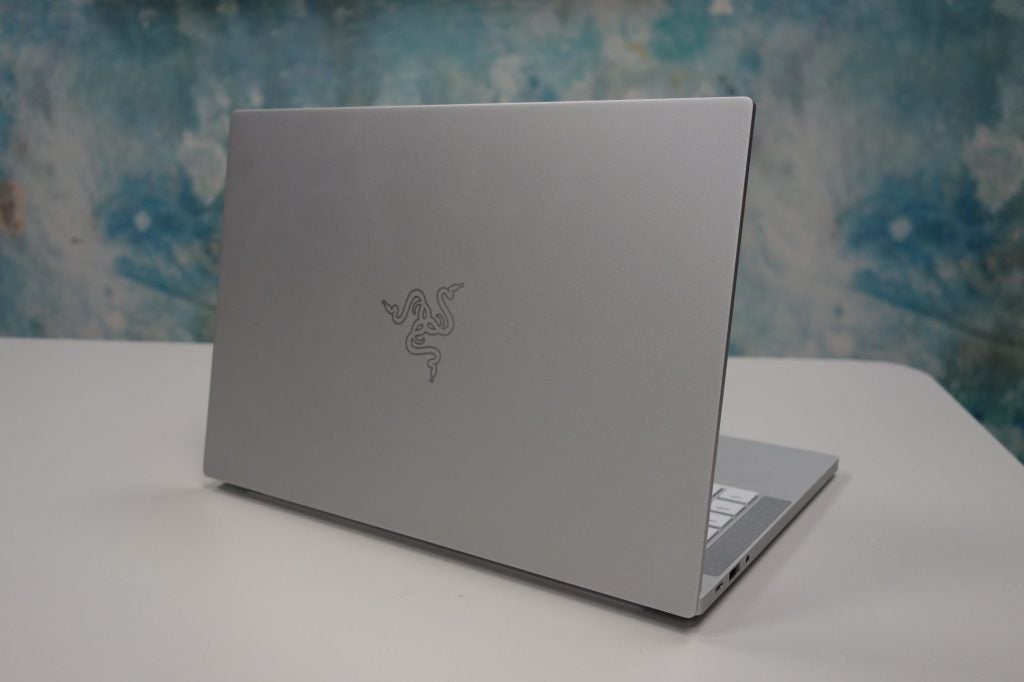 The Mercury White coating is attractive and is far less brooding than its jet-black predecessor. The Razer logo is still positioned front and centre, but only as an outline. The bright green colouring has been ditched, too, with Razer opting for more subtle styling.

The Stealth 13 looks clean and elegant, despite flaunting so many features. Two up-firing speakers sandwich the keyboard; a Windows Hello supported camera sits above the screen; and all the important ports are present, including a headphone jack, Thunderbolt 3, USB-C and two USB-A inputs. Maybe you could bemoan a lack of HDMI for hooking up the Stealth to an external monitor, but Thunderbolt 3 proves a future-proofed alternative. 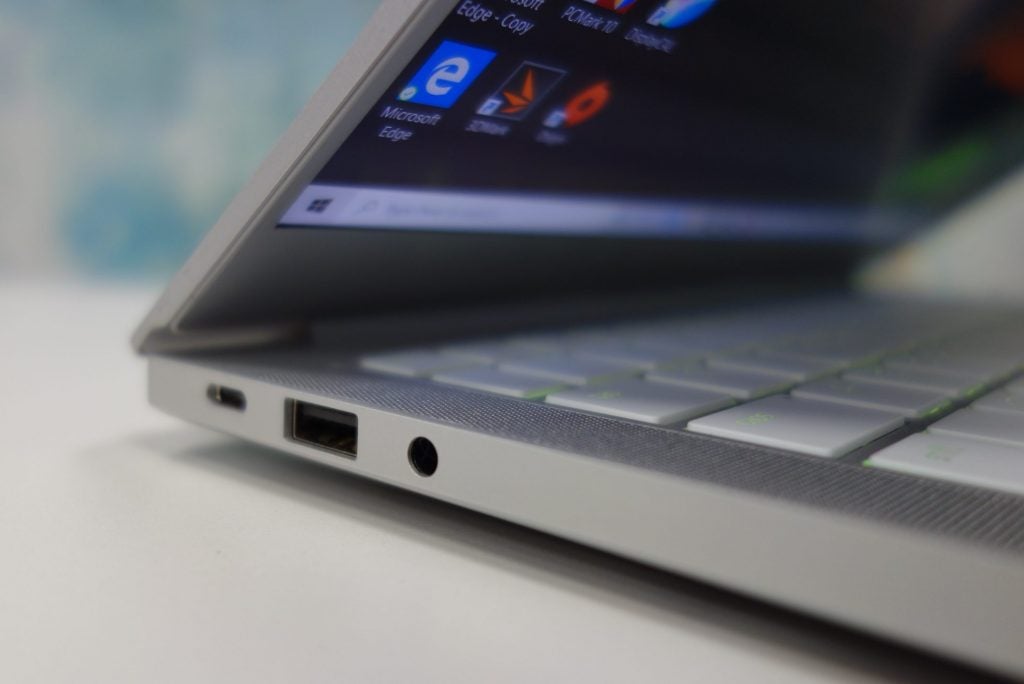 The weight of the new Razer Blade Stealth 13 has actually increased to 1.36kg due to all the high-end components. It’s also slightly thicker now at 15.3mm. The Stealth is still easily portable enough to merit the Ultrabook classification, but you’ll find thinner and lighter alternatives if that’s your priority.

The Stealth’s bezel is super-thin on the sides and top of the screen, but underneath it’s as chunky as a chocolate bar. The arrival of the new Dell XPS 13 (2020), with its four-sided Infinity Edge bezel, makes the Stealth 13’s bottom bezel look outdated.

With the customisable RGB backlighting, the Razer Blade Stealth’s keyboard may look built for gaming – but it doesn’t offer the same high performance found with the likes of the Razer Blade 15 Advanced Model.

The lack of optical switches and tactile feel mean the keys aren’t snappy or reactive enough to please competitive players. But such a performance was never expected from the Razer Blade Stealth. 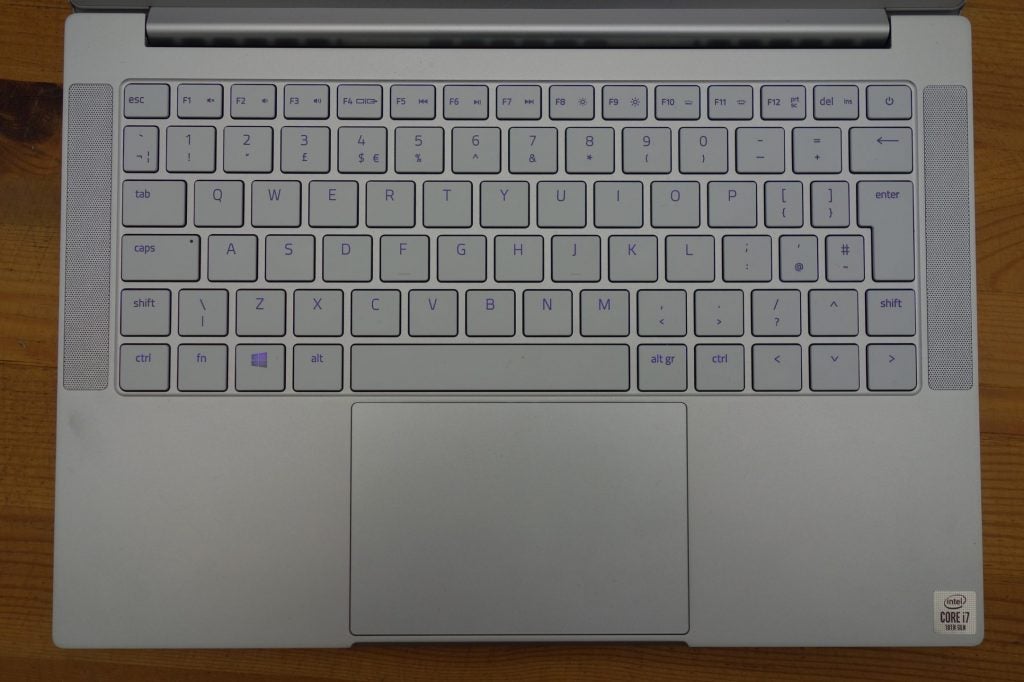 Unfortunately, this isn’t the greatest keyboard for typing on either. A lack of tactile feedback leaves the keys feeling spongy. There’s no satisfying click to each press, so it isn’t always obvious that each input has been registered. Let’s be clear: this isn’t a bad keyboard, but rival Ultrabooks offer a superior experience.

The Stealth’s glass touchpad fares much better, proving deadly accurate and pleasingly smooth. The trackpad is also an ideal size; not so big that it feels crammed in, and not so small that it’s a pain to use.

Razer Blade Stealth 13 display – In need of a refresh

One area where Razer has consistently knocked it out of the park across all laptops is the screen quality, and the Stealth is no different.

The highlight feature is the brightness, with a peak 456 nits only being bested by Apple laptops in recent memory. This means you’ll suffer little glare on the Stealth’s screen, even when using it outdoors.

The Stealth’s screen isn’t quite as effective when it comes to darker colours, with blacks and greys often appearing washed out. Contrast is still good at 1388:1, ensuring images look vibrant and punchy. 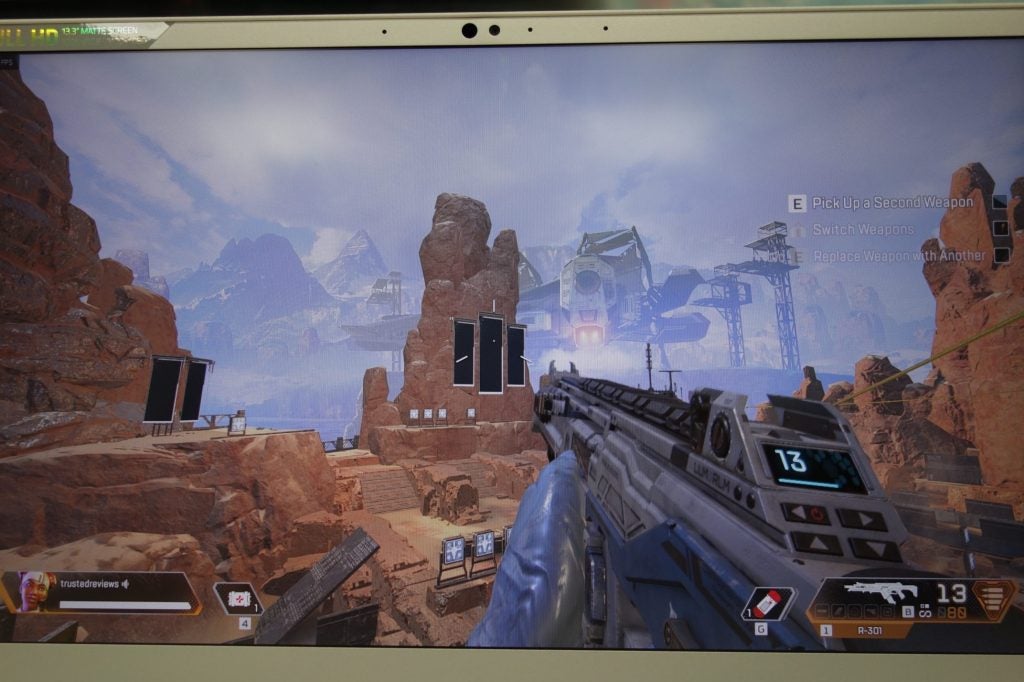 Colour accuracy is impressively high, with an sRGB colour gamut coverage of 96% one of the best seen on an Ultrabook, ensuring games and films look just how the creators intended. The 66.5% Adobe RGB and 68.8% DCI-P3 colour coverage results aren’t so great, but they’re only important for professional creators when editing photos and videos – the Stealth isn’t intended for such use.

The Stealth’s refresh rate is limited to the standard 60Hz. That’s no issue, though, since the Stealth will struggle to see frame rates surpass 60fps with the majority of titles.

The Stealth isn’t unique for having this chip – the majority of modern Ultrabooks feature Ice Lake – but it’s the only laptop to see an Intel Core i7–1065G7 CPU with a maximum TDP of 25W.

This allows the Razer Blade Stealth to feature a Performance mode, which cranks up the power and fan speed when activated, so to eclipse the performance of rival Ultrabooks. This mode can only be used when the laptop is plugged into a power source, though, but it’s still very useful if you want to boost frame rates when gaming.

When it comes to processing power, benchmark results show the Razer Blade Stealth is largely unrivalled in the Ultrabook space. This is no doubt thanks to the unique 25W TDP of its Ice Lake chip.

These figures were gained when running the Stealth in Performance mode, however; the benchmark figures drop down to become more in line with other Ultrabooks when out of reach of a power source.

The GPU performance is also given a boost thanks to Performance mode, with the 3DMark Fire Strike benchmark showing that the Stealth bested every other Ultrabook without a dedicated GPU.

However, the Ice Lake chip can’t quite compete with even the most low-powered graphics cards, with the top configuration of the older Stealth Laptop – equipped with Nvidia’s MX150 GPU – still edging it for graphical grunt.

How does the Stealth’s GPU power translate into game performance? We ran Dirt Rally, Shadow of Mordor and Apex Legends, with the frame rate hovering around an unstable 20-30fps. By lowering the resolution from 1920 x 1080, or fiddling with the graphics settings, I was able to push the frame rate up to a 45-55fps range, which is very much playable.

The Stealth proved capable of playing eSports and indie games, as well as titles released three or four years ago. That’s impressive considering the Stealth has no dedicated GPU. But no matter how much I manipulated the graphics settings, I had no luck in getting Shadow of the Tomb Raider to run smoothly, indicating AAA games are off the table.

The Stealth’s SSD speeds are pretty nippy, making it one of the fastest Ultrabooks we’ve tested for both loading and saving files. The 256GB SSD capacity is pretty stingy if you’re planning on downloading lots of games, though.

Intel’s Ice Lake chip doesn’t just provide a performance boost; it also makes the Stealth more battery efficient. Since the CPU has its own integrated graphics, the Stealth’s battery needn’t suffer the relentless appetite of a dedicated GPU.

Our Powermark benchmark result places the Stealth’s battery life at 7hrs 30mins – that’s with the RGB keyboard backlight deactivated, the brightness dimmed down to 150 nits, and the benchmark software set to simulate a typical day of web browsing and video streaming. 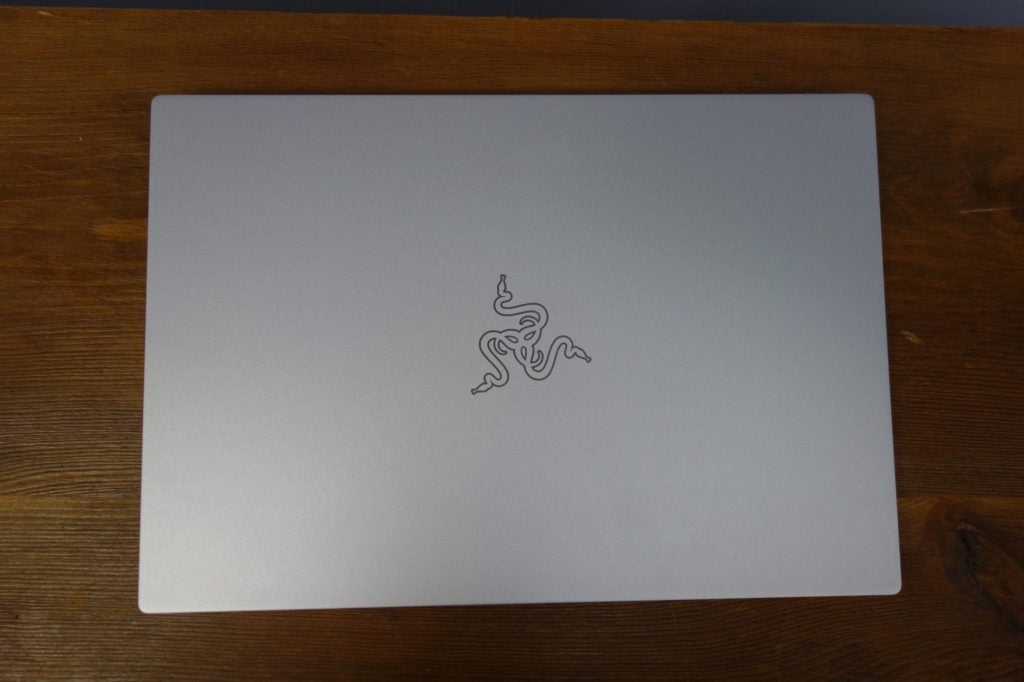 If you want the keyboard to be glowing like a rainbow, battery life will take a nosedive. That said, as well as a Performance mode, the Razer Synapse software also offers a “Battery Saver” alternative.

The Stealth can be recharged to max capacity in just 1hr 30mins. Such a skill isn’t to be underestimated; it’s a real boon to be able to fill up the tank last minute before you head out.

Should you buy the Razer Blade Stealth 13?

Razer’s pitch for the Stealth is clear: this is an Ultrabook aiming to offer all the benefits of a Dell XPS 13 or Surface Laptop, while also dabbling into gaming.

When judged solely as a standard Ultrabook, the Stealth is up there with the best thanks to a blitzing performance, eye-catching design and stunningly bright display. But Razer has had to make a couple compromises to fit in that unique 25W Ice Lake chip, making the Stealth slightly thicker and more expensive than competing models.

Despite these compromises, the Stealth under-delivers when it comes to gaming, struggling to hit even 30fps when playing low-intensive games. You can play the likes of Apex Legends and Dirt Rally in Full HD, but you’ll need to hammer down the graphics settings.

Gamers will likely be tempted to opt for the standard Razer Blade 15 laptop instead, which may be thicker and heavier, but offers far better gaming performance for only a little more money. But if portability is a priority, and you fancy playing Fortnite or Apex Legends every now and then, the Stealth remains a fantastic option.