Our friend Rayman is the king of distraction. So fast, so action-packed are his adventures that Ubisoft’s mascot manages to hide the fact that his hands, feet or his head, are actually attached to his body. If you came across someone like that in the street, chances are your instant reaction would be to make a grab for your mobile to dial 999, yet in the world of Rayman – where getting him to stand still for a couple of seconds is a genuine exercise – this is all perfectly normal.

That’s namely because Rayman is designed to constantly be in motion and, like his two previous recent mobile adventures, Rayman Jungle Run and Rayman Fiesta Run, Rayman Adventures serves up a landscape laid out for him to dash across at pace, smashing through barriers and taking down rivals with a simple swipe of your finger. Indeed, anyone peering over your shoulder while you play might assume you were having a whale of a time and, indeed, Rayman Adventures certainly looks the part. Unlike those aforementioned predecessors, however, the action here feels more than a little superficial. 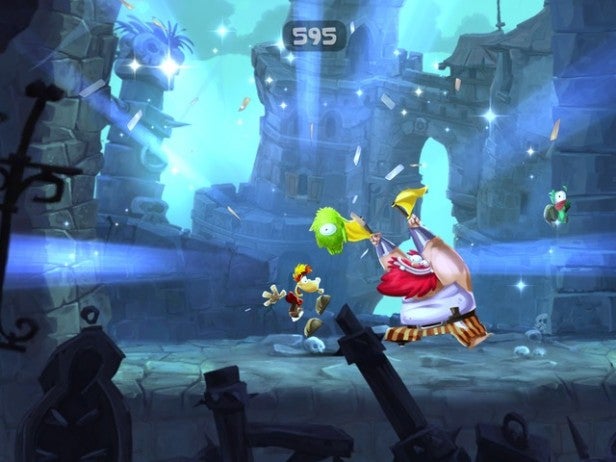 Control wise, things are kept simple. Aside from an initial swipe to get things going, Rayman runs of his own accord and continues to do so until he hits a wall. A tap of the screen triggers a jump (with several in succession triggering an ascent up any parallel walls you encounter), while a swipe ahead unlocks an attack on any foe in his path. New to Adventures is the ability to change direction with a swipe in the opposite direction, with much content actually hidden off in side avenues only accessed if you have the gumption to break from the status quo and change course once in a while.

As you might expect, all of this happens at a rather frightening pace, though you’re never actually alone at any point during the game; at the start of each level you have the option of pairing up to one or more furry, flying critters, each of which comes with their own unique ability to designed to help you on you way. Some highlight objects you need to pick up to boost your score (the more points you earn, the more trinkets you unlock and the higher you rise up the scoreboard), others defend you against attack for short bursts, or even help you suck up scores of Lums in dedicated levels. 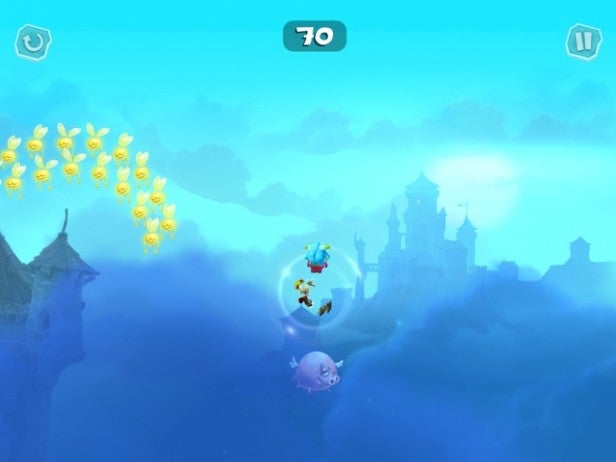 Indeed, Rayman Adventures splits the action between standard platforming levels, where the idea is to pick up hidden objects as you race through to the 2D stages, battle encounters where taking down all enemies in your path is the goal, and Lum fests, where shorting packs of the bug like creatures as they hover in the air is the order of the day. As you might have guessed, the key to success in all these stages is to make use of the appropriate companion at the right time; little point in strapping on a snorter, for instance, if the only task at hand is fighting.

This is also where the game’s energy system, which applies to the companions rather than Rayman himself, comes into play. Our furry friends need feeding in order to be used in play, with food earned from successful runs soon running rather dry. Paying for extra nutrition means you can take on levels with the maximum number of assistants allowed, though in the early stages at least, one tends to do the job. It’s a slightly complex way to coax money out of you, but nowhere near as confusing as the menu system, which makes simply starting a new set of levels something of an ordeal. Like many free-to-play releases, there are so many icons flashing at you from start to finish that simply paying in order to stop the pestering feels like a valid option. 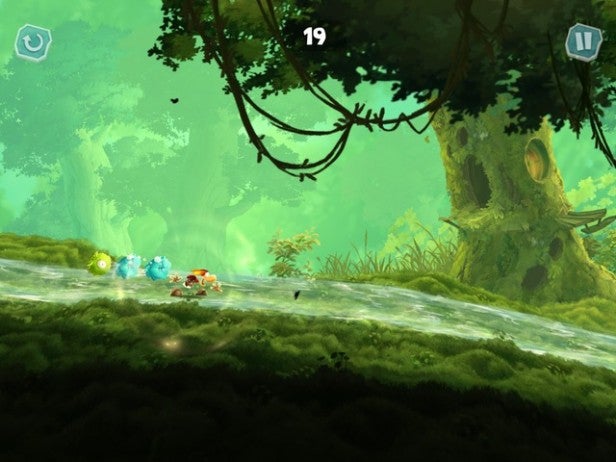 There are two bigger problems with play, however. The first is probably the most damning: it’s all a little dull. While the screen bursts with action from start to finish, your role in it is somewhat limited, and it’s possible to watch entire sections of a stage fly by with minimal input from you as the game looks to show off some elaborate set piece its put together in order to make you feel good. There just isn’t much to be done, and the intentionally short nature of the stages means whole levels are over before they’ve even begun. Rayman Adventures just isn’t that deep.

The other downer is the fact that this is a release that, as things stand, is more than a little buggy. On a few occasions during our play test we started a level only to discover that Rayman himself was missing in action. With no way to exit other than closing the entire game down, we were left staring at a blank starting post, with the prompt from the game to “swipe to begin” ringing rather hollow. A brief scan of the game’s user reviews on the App Store suggests we’re not the only folk who have run into a bug or two, either. 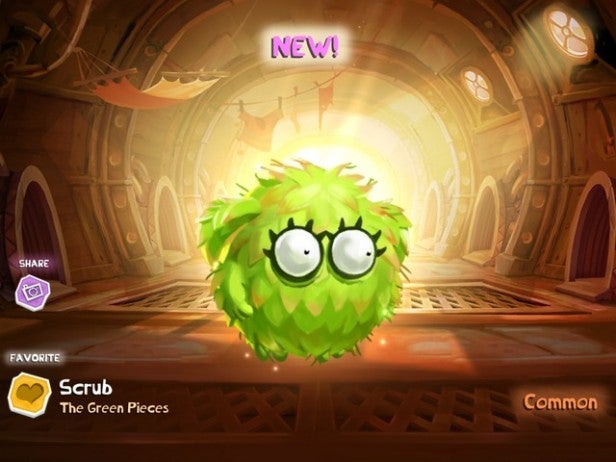 Even putting all this aside, however, Rayman Adventures just feels a bit forgettable, drawing on the action of its predecessors but not reaching the same standard when it comes to its implementation. Originally release on Apple TV, it’s easy to come away with the impression that, for all Rayman Adventure’s obvious charm and character, it’s a bit of a rush job, with the action as fleeting as the creativity that went into designing it.

Verdict
From the outside looking in, Rayman Adventures looks every bit the action-packed platformer, but in practice it’s all a little hollow, with the game delivering more visually than it does with actual gameplay. Throw some assorted bugs into the mix, and you’ve got a Rayman release that feels rather rushed, promising way more than it actually delivers.