It’s a measure of how much services like Steam, Xbox Live Arcade and the PSN Store have changed the games market when a title like Ratchet and Clank: Quest for Booty emerges. This isn’t a stripped back mini-game based on Ratchet and Clank or an extra episode for owners of the incredible Tools of Destruction, but a proper (albeit pint-sized), brand new AAA game featuring everyone’s favourite furry alien/robot duo (though Clank fans should be aware that their hero gets a guest appearance only). It’s every bit as exciting and technically accomplished as Tools, and in all ways but one (length) indistinguishable from a new Blu-ray R&C adventure. Admittedly, we’re talking about a whacking 3.2GB download here, but Quest for Booty feels like a little piece of the future, right here, right now. 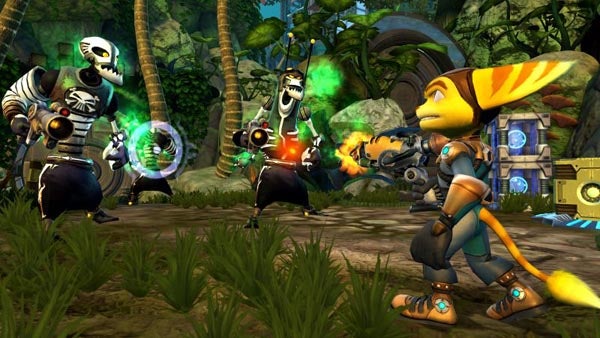 It begins pretty much where Tools of Destruction left off, with Ratchet and Tools’ female lead, Talwyn, on the trail of the missing Clank. Ratchet discovers that the secret of his friend’s whereabouts rests with a legendary pirate, Captain Darkwater, once the boss of Captain Slag and Rusty Pete. Thus begins a tale confined to a planet of pirate-themed adventure, complete with phantoms, pirate ships, secret caves and tropical islands – just like those Caribbean based films that were so popular with the youth in picture houses a few years ago (or the Monkey Island games before them, come to that). 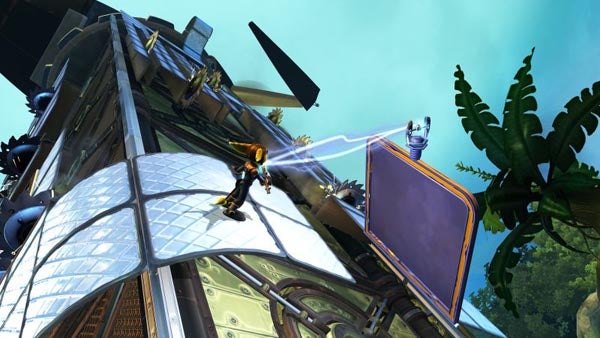 The actual action is classic Ratchet and Clank, combining platforming and puzzling with some satisfying shoot-em-up action. Here, however, the mix is skewed a little differently than it was in Tools of Destruction, with less emphasis on the heavy artillery and more on the jumping and conundrum solving side of things. Some fans have moaned about this, but I didn’t mind this too much. In a way, Quest for Booty is the closest R&C have come to an old-fashioned platform game since the awesome Going Commando/Locked and Loaded back in 2003.


On the one hand, this means that there’s nothing in the way of new weaponry to mess about with – and experimenting with the latest big guns has always been part of the Ratchet and Clank appeal. On the other hand, Insominac has introduced some cool new mechanics to spice up the platforming a little. First, Ratchet’s new wrench (the Omniwrench) has developed a sort of tractor beam, which can be used to manipulate certain objects and create or reposition platforms, or ready springboards for jumping. 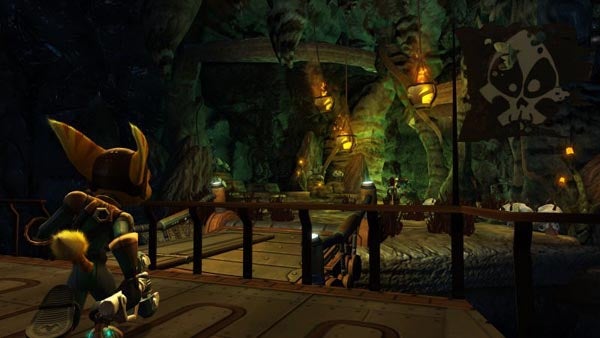 Secondly, the game goes fairly big on dangerous dark areas which need to be filled with light, with an unstoppable enemy that reminds me a bit of the Kryll in Gears of War. To survive these irritating varmints Ratchet needs to scoop up little glowing cave creatures called Heliogrubs, and getting from one to the other is a regular source of puzzles in the game. Little exploding lumps of magma also have their part to play in opening barriers, and plenty of entertaining and engaging – if old fashioned – gameplay ensues. In fact, Quest for Booty even finds space for a few pirate challenges that bought back sweet memories of the Monkey Island games to my mind (even if the puzzles aren’t anything that your average five year old couldn’t handle). You just have to love Captain Blackwater’s personal cocktail shaker, for example.

The action takes place over only a handful of levels, but within that space we get some excellent bits of platforming and one or two brilliantly staged battle sequences, and the pace rarely lets up for a second. And helping everything along is the series signature sense of humour, with lovable characters, witty, self-aware dialogue and some superb music on a general piracy theme. Quest for Booty is short at around four hours of play, but it actually feels shorter just because you’re having such a good time while you play. It’s a glowing example of how nobody outside Nintendo does this stuff as well as Insomniac anymore. The control system is well thought out and responsive, you’re hardly ever caught out by a bad camera angle and while the game is never too easy, spikes of hideous difficulty are few and far between. Even the bit that troubled me most – a pretty vicious, multi-stage pirate raid – could be defeated with just a little skill and strategy. 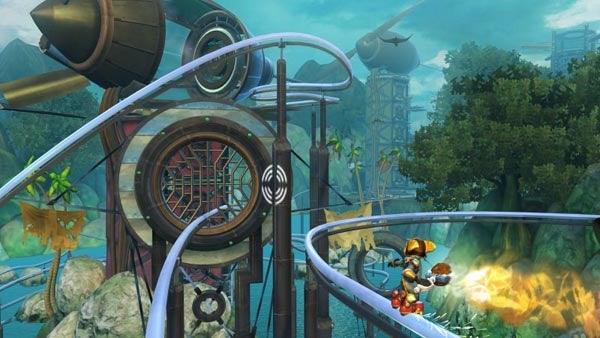 The graphics, meanwhile, are just brilliant. There are times when you’ll notice that the backgrounds are less detailed, epic or expansive than they were in Tools of Destruction, but there are also times when you notice how exceptionally good the art and textures are or how warm and cinematic the lighting is. As with Tools of Destruction, it’s hard not to make comparisons with Pixar. Dozens of studios are now knocking out CGI kid flicks at a fair rate of knots, but only two or three can produce work of Pixar quality and only one produces films as dazzling and technically accomplished as Cars or Wall-E. With Quest for Booty, Insomniac again demonstrates that while other developers can do cutesy platform games, only it and Nintendo seem able to produce ones with this sort of polish and beauty. It’s safe to say that this is the best looking downloadable game yet. 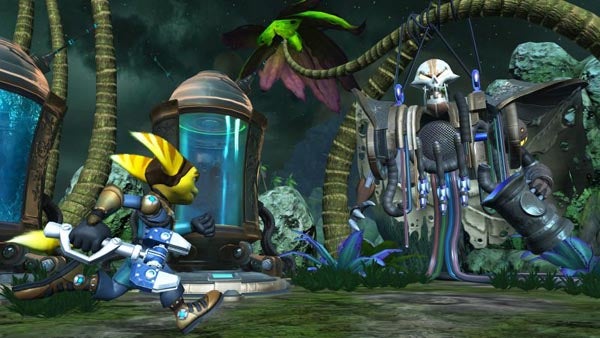 Still, much as I love Quest for Booty – and I do – we eventually have to address the size issue. For some gamers, £9.99 is just too much for a game that lasts three or four hours, and the length and lack of additional gadgets and weaponry (not to mention mini-games and guest appearances from Captain Quark) makes Quest for Booty a bit of a damp squib. Personally, I loved every single pirate-packed minute of it, and I’d put it in the same category as Half-Life 2: Episode One – a single, short but concentrated blast that rolls all your favourite bits of a great game into one tight package. Sure, there’s precious little replay value, but I’d still unreservedly recommend it. If you’re feeling tight (and these days who isn’t) there’s an argument that you’d be better served replaying Tools of Destruction. Stuff that, I think – just pony up the dough and grab a great fist full of Booty.


A short burst of Insomniac’s platforming magic, low on new weaponry and over too soon, but hugely enjoyable while it lasts. Well worth the £10 outlay.