Go to any fancy dress party and there’s a fair chance you’ll stumble across someone attempting to ‘do a Rambo’. They may not have Stallone’s muscles or brooding voice, but they give it a go with a vest, a thin bandanna and some creative face paints. It’s amazing to think that those who adorn themselves in such a manner tend to have little awareness of Rambo’s status as a piece of American propaganda.

Fuelled by a desire to highlight the weakness of communism, the first three films – which were released at the tail end of the Cold War – all aimed their sights squarely at various US enemies around the globe, showcasing the bravery and glory of capitalist system in the process. Rambo might have become a bit of a cult hero, but there was nothing subtle about the message behind the movies. 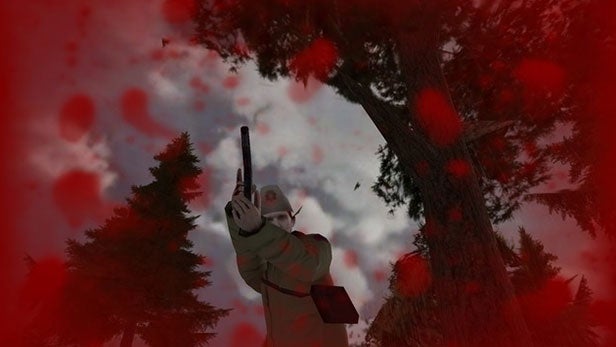 Communism, of course, has taken something of a back seat in recent decades as the world agenda has moved on, leaving Rambo somewhat out in the cold. And yet, with a fifth movie rumoured to be in production, so pops up this supposed celebration of the series, encompassing the original films in one short and sharp action title that, in just a few animated screens, manages to tell the franchise’s entire story.

Sadly, the gameplay wrapped around Rambo is so limp, so half-hearted, so frankly unfinished that it almost feels kinder to focus the attention on the slightly embarrassing story screens than on the game itself. Of the two elements, the former is very much the lesser of two evils. 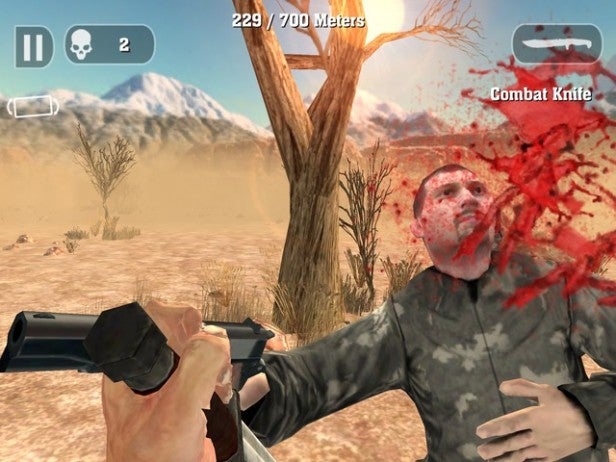 Spread out across three locations that tie in with the three original movies – Hope, Washington in the U.S., Vietnam and Afghanistan – the majority of the levels require you to simply walk from the start of the stage to the end without dying. Initial levels, all of which are viewed from a first-person perspective, see you armed with only a knife for your protection and the ability to sidestep and jump. Ambling through a forest, enemies will take pot shots at you as you plod through the stage, with the idea being to dodge them by moving left or right or take them out by tapping the screen when you’re in range.

Later levels have weapons placed in your path that you can use to fend off foe from a distance, with some requiring you to kill a set number in order to progress. There’s even a survival mode where you stand on guard and shoot at all approaching soldiers. Most stages, however, simply charge you with walking a set distance without dying, with any kills you make along the way an optional extra.

There are no words to describe just how poorly this whole process is handled, however. Ideally, as well as dodging the enemy it’s also suggested that you guide Rambo out of the way of trees, rocks and other oncoming level architecture, either by moving left or right or jumping. However, in reality, walking into (and, indeed, through) these objects has no bearing on your progress. In Rambo’s world, it’s entirely possible to walk straight through tree trunks, boulders, even planks of wood, defying the laws of physics as you go. 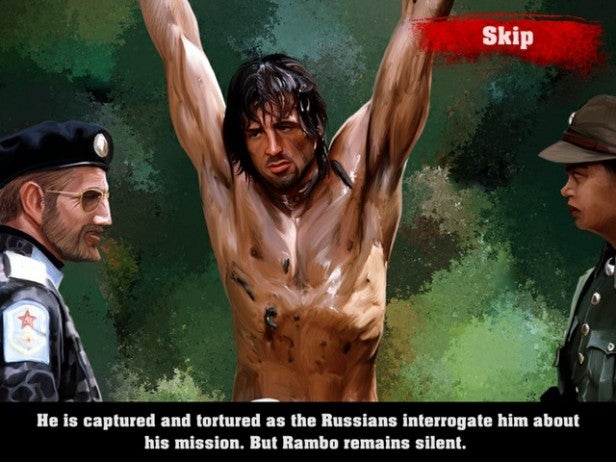 Bizarrely, Rambo’s default control set up uses swipe controls – sliding your finger across the screen triggering a move in the same direction. In practice,, this is a rather taxing action to have to make repeatedly as you stumble through the stage, making tilt controls the preferable option. Even using the accelerometer as described, however, doesn’t really lift the experience given that all you’re doing is walking across an especially badly animated map taking on duplicate enemies that could have been lifted straight out of a badly coded 3DO shooter.

It all leaves Rambo as an utter mess of a game that completely undermines the platform it sits on. Just what those at Apple were smoking when they decided to feature Rambo on the App Store at launch is anyone’s guess. This is, undoubtedly, one of the worst and most embarrassing mobile games of a generation, and evidence that Rambo is a franchise that, like  some say of communism itself, is something best consigned to history.

Verdict
A painfully amateur effort, Rambo is an insult to mobile gaming, the platform the game sits on and the people that will pay for it. Developer Creative Distribution has served up a laughable package that is barely a game, let alone a good one. You won’t play a worse game this year, or maybe even this decade.