Those looking for a more contemporary, less chunky, air fryer at a reasonable price will surely have found find match in the Quest Digital LCD Air Fryer. It’s by no means perfect – condensation on the worktop and longer cooking times are its low points, plus the touchscreen can prove exasperating – but it gets there in the end. If the price of a Ninja or Philips model has so far been the barrier to investing, this high-style, low-fat air fryer could prove the perfect addition to your kitchen.

What is the Quest Digital LCD Air Fryer?

In a world of boxy black and grey air fryers sits the Quest Digital LCD Air Fryer. Not only is it finished in crisp white, it’s also the only model with a retractable handle at the back, meaning you won’t need to bear-hug it in and out of a cupboard.

These points of difference, among a few others, are likely to make the Quest appeal to those who aren’t convinced that one design is right for all. Beyond looks, there’s some useful functionality: eight presets or manual cooking, dishwasher-safe parts, and a neat touchscreen that’s easy to wipe down as opposed to buttons to clean around.

Quest Digital LCD Air Fryer – What you need to know

Quest Digital LCD Air Fryer design – Controls aren’t as easy to use as they should be, but at least clean-up is simple

Including a touchscreen on a reasonably priced model definitely gives the Quest Digital LCD Air Fryer added appeal, but I found the model the unit lacked responsiveness. Heavy-handed users are sure to appreciate it more than light tappers; it required sustained pressure to toggle presets as well as time and temperature choices. Each time I programmed it, I found that I went past the option I wanted. 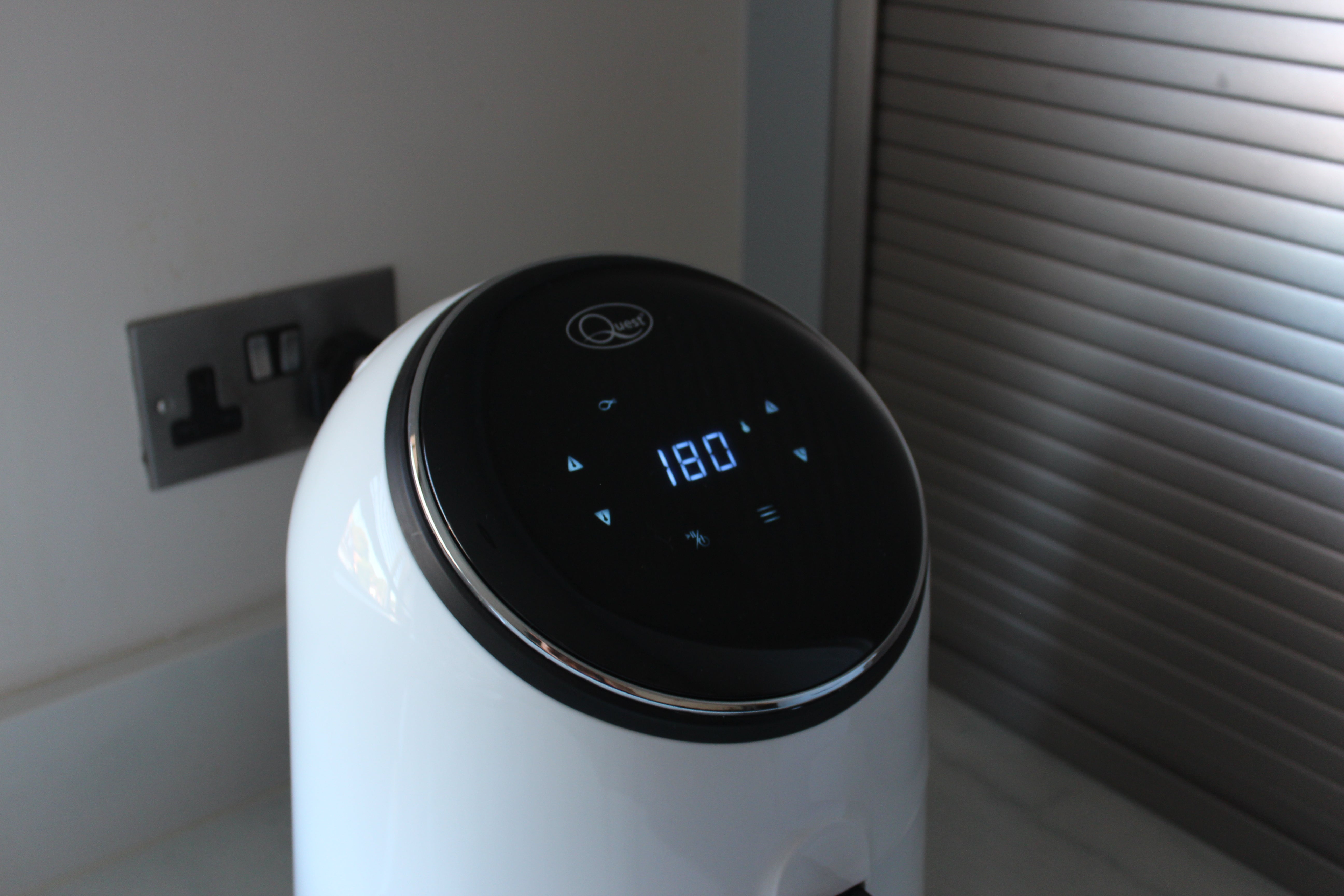 The touchscreen looks neat but needs a firm press

That said, the touchscreen offers a versatile range of cooking combinations, with a temperature range between 80-200ºC (the lower heat could lend itself well to keeping food hot without drying it out too much), a 60-minute timer and presets for fries, bacon, chicken drumsticks, prawns, steak, muffins/cake, vegetables and fish.

Cable storage in the base is another thoughtful design touch, meaning no messy power cords trailing across a worktop. The Quest’s other practical feature – the pull-out handle – could have been more considered, though. It grows hot during cooking, so can’t be gripped until the air fryer has cooled down; the instructions recommend waiting 30 minutes before using it to carry. 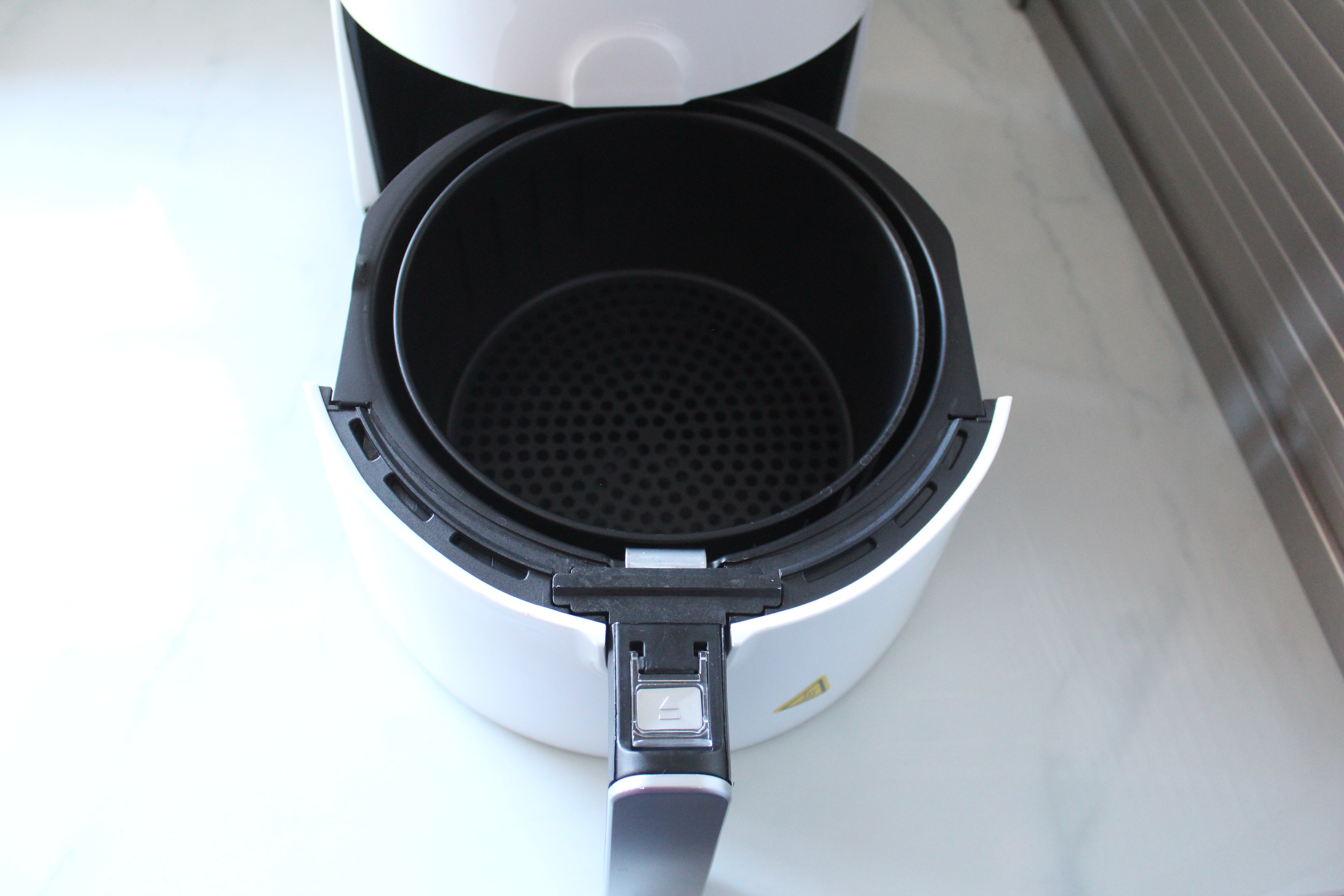 All parts are dishwasher-safe, making this air fryer easy to clean up

I found both the basket and the pan easy to clean by hand, although the narrow slots at the side might end up harbouring food build-up and need a soak. For a thorough clean, however, you’re best placing parts into the dishwasher. Both the pan and the basket are dishwasher-safe, making it a straightforward appliance to use every day.

Of course you can bake and roast in the Digital LCD Air Fryer, but the most common reason for buying an air fryer is its ability to cook low-fat chips. Sadly, this is one area where the Quest model didn’t live up to expectations. And it’s a bit of a puzzle as to the reason. Given that it comes packing a 1300W motor, and sounds like it’s circulating the hot air well, it should do a fine job.

However, the fresh chips I tried to make were unevenly browned, despite being shaken frequently over the 200ºC 20-minute cooking time (plus a three-minute preheat). Some pieces were still pale and firm, while others were overcooked.

There’s plenty of room inside, but our chips didn’t cook evenly

Another niggle was the amount of condensation produced. Damp patches gathered around the base of the machine and on the underside of the basket’s button cover, instead of being vented from the outlet at the back.

Condensation tended to spill over the sides

The preset for chicken didn’t result in am even roast, either – 25 minutes at 180ºC for two legs wasn’t sufficient to leave the skin crispy, while I struggled to fit them into the relatively compact 2.6l non-stick basket. On the plus side, it only needed a few extra minutes at a higher temperature to cook the flesh through to the bone without the meat drying out.

Where the Quest Digital LCD Air Fryer did well was with reheating food. Again, the basket was a little on the small side for two slices of pizza, but the slices only needed five minutes at 150ºC to emerge bubbling and crisp, with no sogginess.

Should you buy the Quest Digital LCD Air Fryer?

Small families, couples and solo households are probably the best home for this sleek, white low-fat fryer, mainly because the capacity and performance make it better for little and often cooking rather than big batches.

Sure, the design could use a tweak or two, especially that stubborn touchscreen. And you may have to wait a few more minutes for the food to be well-cooked and crispy. Nevertheless, the Quest Digital LCD Air Fryer should still prove useful for busy lives, after-school dinners and late-night snacking alike.

That said, spend a little more and you can get the slightly better Tower 4.3L Manual Air Fryer, while those looking for the ultimate performance should check out the Philips Viva Airfryer HD9220, which is far more expensive but worth every penny.