Affordable air fryers can be a mixed bag – if they’re too compact, they can’t handle the demands of family meals, while if they’re hard to programme, they’re likely to gather dust in a cupboard. The Tower 4.3L Manual Air Fryer is neither of these things, making its few flaws fairly forgivable. In an ideal world, it’d cook large amounts more evenly and be dishwasher-safe, but for your money, you get a decently robust fryer with the guarantee to back it up, and enough capacity to be able to feed plenty of hungry mouths.

Larger capacity appliances can command a bump in the price. Fortunately, the generously sized Tower 4.3L Manual Air Fryer proves that a family-sized model doesn’t have to mean extra cost. Not only does its frying basket contain enough space for several portions of chips, veggies or frozen food, cooked with little to no oil, but it could also feasibly be used for speedily baking a cake. However, it’s not just capacity and cost that this air fryer has going for it – it’s also fantastically easy to use. Anyone who finds touchscreens frustrating, or digital displays confusing, will love its simple functionality – just turn the manual dials and you’re ready to cook.

In a world full of digital displays and different coloured lights, there’s something quite pleasing about an appliance with manual controls that simply gets the job done. There are only two dials on this air fryer – one for temperature, which ranges from 80-200C, and one for time, up to 1hr. The only pitfall is that you’ll need to remember to set a temperature as the timer will run without it being turned up, potentially leaving food gently wafted with warm air but not cooked. There isn’t even an on/off button – you can either wait until the timer bell sounds, after which it switches off automatically, or turn the timer dial to finish. 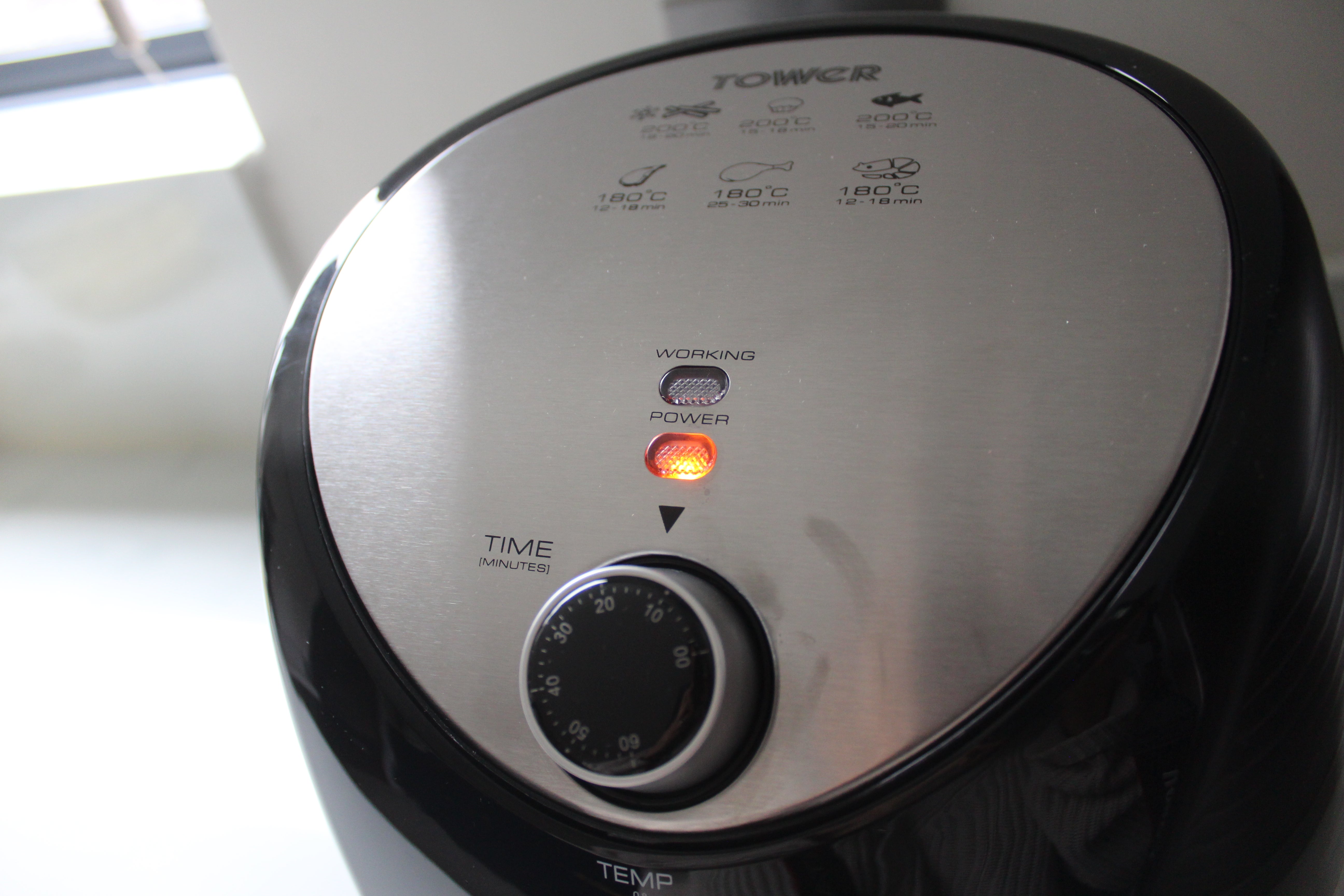 The controls are very simple

The rest of the design is suitably functional. There are hand-hold recesses in the base to move it around the kitchen, a sliding plastic cover to prevent the basket-release button being accidentally pressed (a more practical solution to the potentially flimsy flip-up covers on similar models) and a guide to cooking times and temperatures for different foods on its metal fascia. Two lights show you when it’s on and when the heating element is working. Another big plus is a free three-year guarantee when it’s registered online, which gives more peace of mind than the standard year offered by comparable manufacturers.

Inevitably at this price point, there are a few downsides. One is that parts aren’t dishwasher-safe, which is always a drawback for an appliance that becomes covered in hot greasy splatters. In testing, it was also noticeably noisy: I had to raise my voice to be heard over the whooshing of the fan.

The large capacity of the non-stick basket also threw up the issue of uneven cooking. A batch of fresh potato chips, drizzled with a spoon of oil, cooked more thoroughly on top than underneath despite being shaken a few times to redistribute the contents. While the instructions advise the optimum amount for crispy fries is 500g, realistically for an appliance of this size, it will usually need to exceed that. 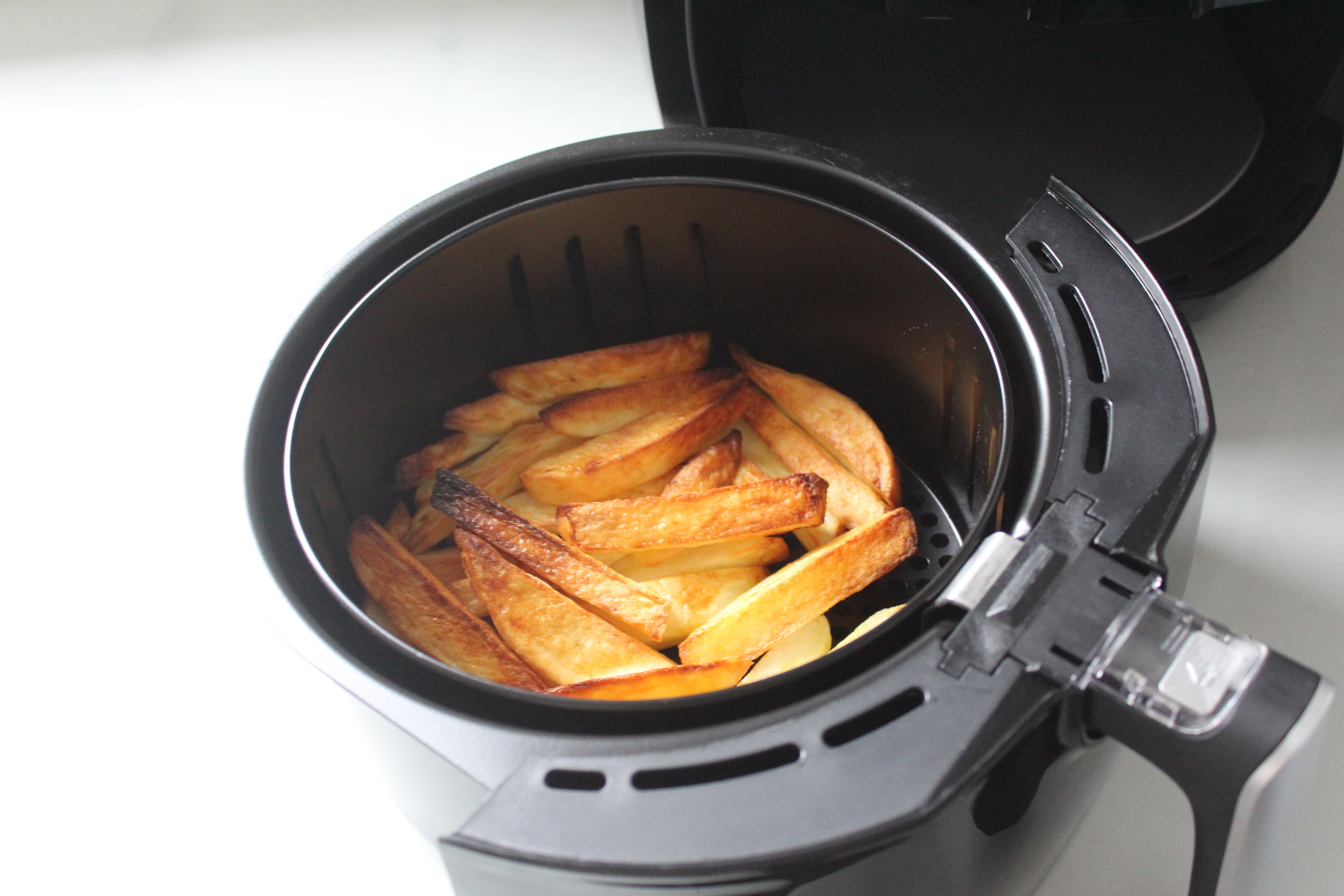 Our chips didn’t cook as evenly as we’d hoped

Condensation also gathered at the base of the machine and under the button cover while cooking the chips, so the venting at the back could use a boost. 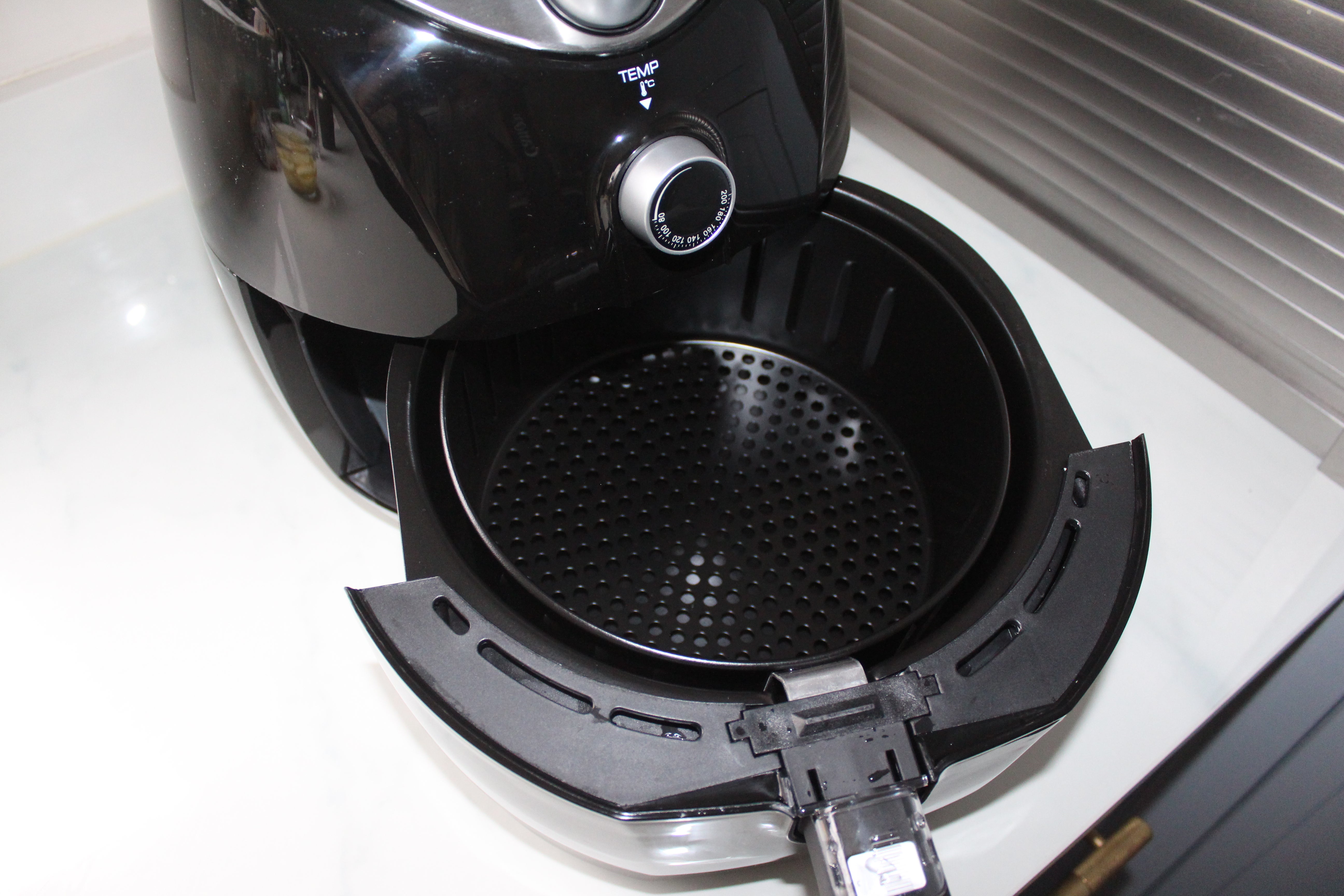 There’s lots of room inside this air fryer

The air fryer’s large 3.2-litre basket is one of its most appealing features, but it’s also one that needs a little working around, as evidenced by the unevenly cooked fresh chips. For example, it performed far better with food that didn’t cover the holes in the base or slits at the side of the basket and restrict hot air circulation. Three roast chicken legs cooked quickly and thoroughly after 22mins at 200C, while two pizza slices reheated evenly with a crisp base and crust in a rapid 5mins at 150C. It may be that smaller batches of chips work better but that’s not an especially efficient way to cater for a family. This air fryer has other advantages over competing models, including its compatible accessories – such as a divider, baking pan and grill rack – which give it extra functionality. It’s a shame the divider (used for splitting the basket to help prevent flavour transfer) isn’t included in the box, but being able to make your appliance bespoke so that it provides the optimum performance for you will help it to earn its place on the worktop. A final plus is the effort to include cooking guidance beyond a basic table – three recipes hidden at the back of the instructions are another sign that Tower want its air fryer to do more than occasionally reheat meals.

While heat doesn’t manage to circulate around the filled basket as evenly as we’d hope, this is still a great-value buy for a family thanks to its price tag, flexibility and ease of use. It’d even suit a small or solo household who might want a small portion of chips one day, and a few grilled sandwiches the next. Compared to similarly priced air fryers, such as the Haden Lorraine Pascale 3.6-litre air fryer models, it arguably delivers more – both in terms of capacity and ability to accessorise.