Q Acoustics latest addition to its well-regarded 3000i range of speakers is a thoroughly engaging listen, treating to the same fine sound that the rest of the lineup offers, but with added low-end presence and authority.

Like a guest throwing open the church doors ten minutes after the wedding ceremony has started, the Q Acoustics 3030i standmounting stereo speakers are noticeably late.

The rest of the 3000i range – which is a) already extensive, and b) very well-regarded – launched two years ago. So what hare-brained excuse do the 3030i have for showing up so late to the party?

And why are they so big?

Q Acoustics 3030i price and availability

Q Acoustics 3030i design — Bigger than your average standmount speaker

Let’s deal with the ‘big’ issue first. The 3030i stick so closely to the design template set by their range-mates that in the pictures you’re hard-pressed to tell them apart from the 3010i or 3020i standmounters. They’re smoothly finished, agreeably curved, look good with or without grilles, and appear just as pleasant to the touch as they are easy on the eye. 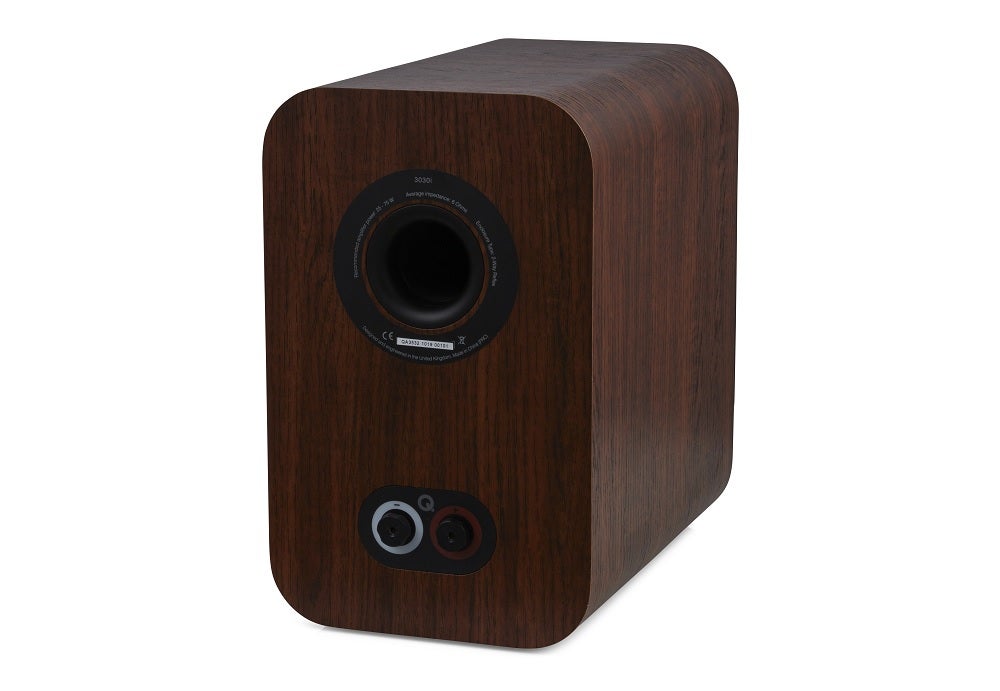 Line all three up together, though, and it’s almost like a trick of perspective. The 3030i are big standmounters – height/width/depth measurements of 325 x 200 x 329mm are considerable for a standmounter these days, and only a few speakers are deeper than they are tall. The nice low-profile speaker binding posts mitigate the depth a bit – just a bit, mind.

But they’re no less good-looking than their slimmer siblings. The curvy bits are nicely finished, the shiny bits aren’t too shiny, and they look purposeful with or without their magnetic grilles in place. Under the cleanly applied finish (yours in black, grey, white or a version of walnut), the 3030i use the same point-to-point bracing that’s served the rest of the 3000i range so well these last couple of years.

Q Acoustics 3030i features — Puts the extra space to good use

Q Acoustics has put the extra cabinet space to good use, at least, and fitted a version of the 165mm mid/bass driver that made its first appearance in the 3050i floorstander. Up above there’s the same 22mm dome tweeter that features across the entire 3000i range. 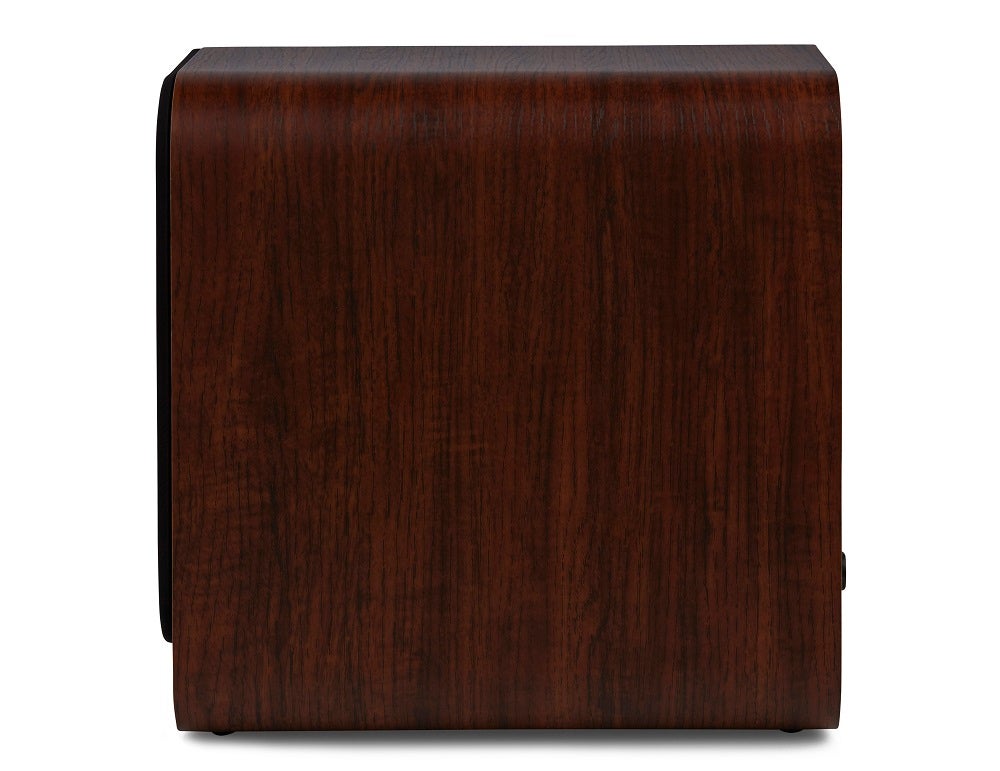 Here, though, the tweeter is decoupled from the cabinet – otherwise it might be unhelpfully affected by the amount of low-frequency activity that big mid/bass driver (aided by cabinet volume of over 12 litres, more than double that of the 3020i) is capable of generating.

At the back of the cabinet, just above those slim speaker binding posts, there’s a bass reflex port. The promise here is of even greater bass presence than that bigger driver can muster alone, as well as a degree of fine-tuning when it comes to positioning the speakers.

If you’re familiar with the sound of any of the other members of the 3000i range, then the audio characteristics of the 3030i shouldn’t come as any great surprise. They’re the same – but more so.

From the top of the frequency range to the bottom, the tonal balance is seamless and just a little on the ‘warm’ side of neutral. Once through Kendrick Lamar’s Alright demonstrates a well-judged level of high-frequency attack, with the 3030i able to bite into treble sounds without getting in any way edgy or coarse about it.

The same recording also spotlights the Q Acoustics’ powers of mid-range communication, loading the voice with an absolute stack of detail and sounding prodigiously articulate as a result. The smoothness of the hand-over between the tweeter and the mid/bass driver is impressive, too, and there’s plenty of space in the presentation for individual elements of a recording to be easy to follow.

Unsurprisingly, though, it’s down at the bottom of the frequency range that the 3030i really assert themselves. Naturally enough, the inherent weight and punchiness of the Kendrick Lamar tune is given vivid description, all straight edges and unshakeable momentum – but the 3030i are no blunt instrument. 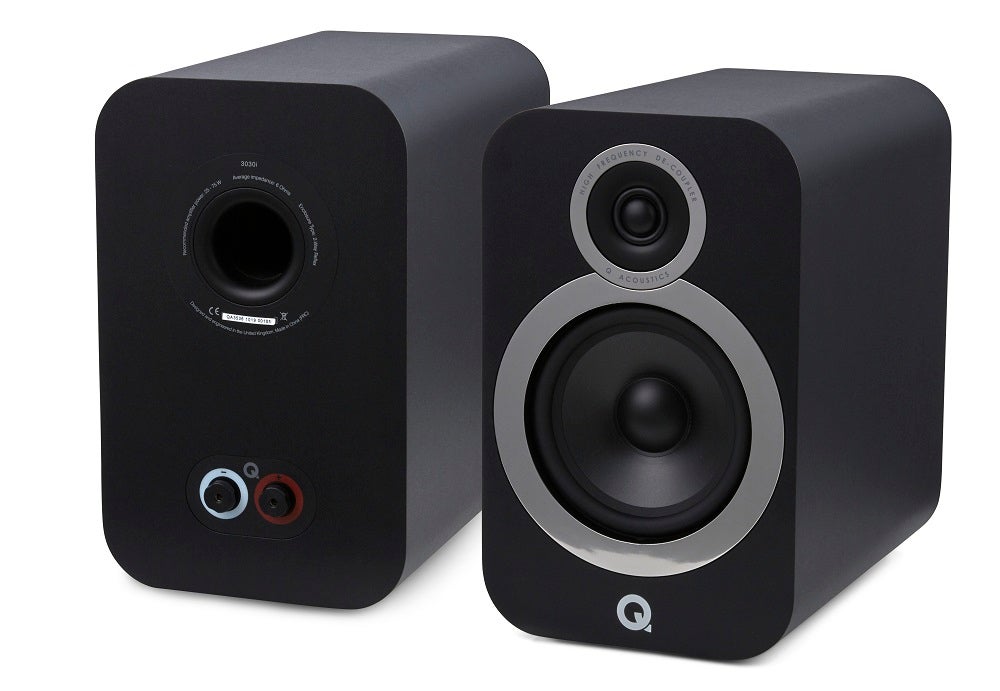 The altogether less assertive sounds of The Unthanks’ version of No One Knows I’m Gone is robustly underpinned by judicious low-end weight and momentum – there’s no suggestion of the presentation being in any way skewed or lopsided, but its foundations are deeper and more secure than pretty much any other similarly priced standmounting speaker.

It follows that the 3030i have the dynamic potency to deal with both the ‘quiet/LOUD/quiet’ broad strokes and the more subtle harmonic dynamics in a recording with equal skill. Rhythms and tempos are managed with something approaching nonchalance, too.

So they’re a thoroughly engaging listen. Before now, the 3000i range had seemed complete – but it seems there’s always space for a speaker with the low-end presence to fill a room without quite the sort of physical presence that makes a room seem full.

You should buy the Q Acoustics 3030i if…

There are alternative standmounters that are a more vivacious listen than the 3030i, such as the Bowers & Wilkins’ 607s. They’re less adaptable than the Q Acoustics, though, and there’s a relentless quality to their presentation that’s at odds with the more easy-going 3030i sound.

The assertive nature of the Q Acoustics’ low frequency handling puts them above similar standmounters at this price. If you want your hi-fi sound to exude a weighty, punchy performance then the 3030i have all the low-frequency authority you need.

In terms of size these aren’t what you’d call bookshelf speakers any more. Be prepared to make space for them as the depth of the cabinet is surprisingly deep.